What is the Hyperkin Xbox One Duke Controller?

Those of us old enough to remember the launch of the original Xbox, way back in 2001 (2002 outside the US) will most likely have a few things burned into our memories – Halo: Combat Evolved, Project Gotham Racing and the absolutely massive controller that came with the already-massive console.

The pad – later nicknamed the ‘Duke’ – would eventually be replaced with the smaller ‘Xbox S’ controller after feedback about the size and comfort the controller offered. Simply put, this was a controller not designed for smaller hands, and it sometimes resulted in uncomfortable or even impossible-to-reach buttons for some people.

Yet the Duke controller had its merits. It was following in the footsteps of the bulky Sega Dreamcast controller and Microsoft was determined to set the Xbox controller apart from the PlayStation’s DualShock. The Duke was definitely a controller you either got along fine with or absolutely hated, but for many it became a piece of nostalgia that reminded them of those early days, playing through the original Halo with friends. Some people, to this day, will tell you that the Duke was the best and most comfortable controller they’ve used.

All of this talk of the Duke and nostalgia eventually resulted in Hyperkin – a company best known for producing the Retron, a retro games emulator box – pitching a unique idea to Microsoft to bring back the Duke as an officially licensed third-party controller for the Xbox One and Windows 10 PCs. So here in 2018, we have not one but two brand new versions of the Xbox Duke controller to enjoy. 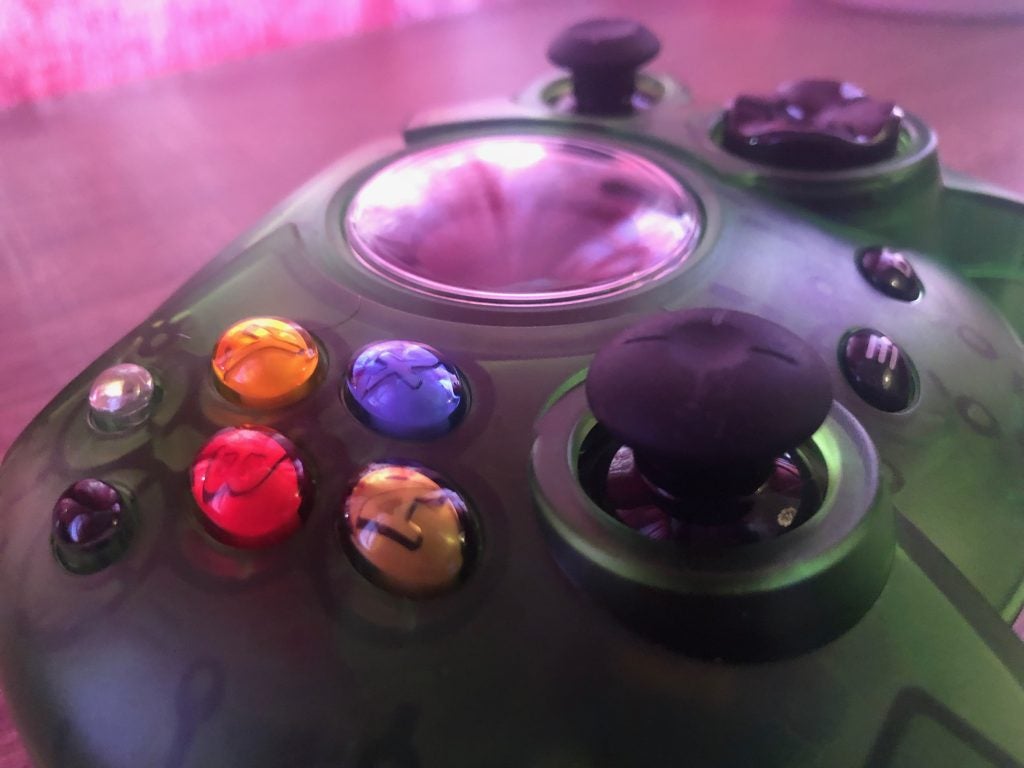 Hyperkin’s replica of the original Duke controller is spot-on. It’s an incredibly accurate recreation of the original controller, bulk and all. If you’ve had any experience with the original Xbox pad, all that nostalgia will come rushing back the minute you get your hands on this new version.

True to the original, the Hyperkin Duke features two thumbsticks, a d-pad, start and back buttons (here, renamed to the Xbox One’s ‘view’ and ‘menu’ buttons) and a set of ‘face’ buttons – the traditional X, Y, B, and A along with the original Xbox’s exclusive ‘black’ and ‘white’ buttons. Just like the original, all of these buttons are slightly slanted to the left, making them narrower than what you might have come to expect from the Xbox 360 or Xbox One controller layouts.

One of the only new things to be found on this controller is a set of bumper buttons at the top. In a modern context, these bumpers function as the LB and RB switches, while also mirroring the Black and White face buttons.

In essence, this means that if you decided to use the Hyperkin Duke just like the original Xbox pad, you can restrict yourself to using only the face buttons (black and white included) and the triggers, while the newly-added bumpers will feel far more natural to those not seeking a nostalgia fix. In addition, a headphone jack can be found at the bottom.

For better or worse, the original Xbox controller’s d-pad is also replicated faithfully here. This, by most standards, was never a good d-pad, though, and while I can see the need for it to return in this otherwise perfect recreation of the original Duke, it’s one of the only unwelcome things to see returning. 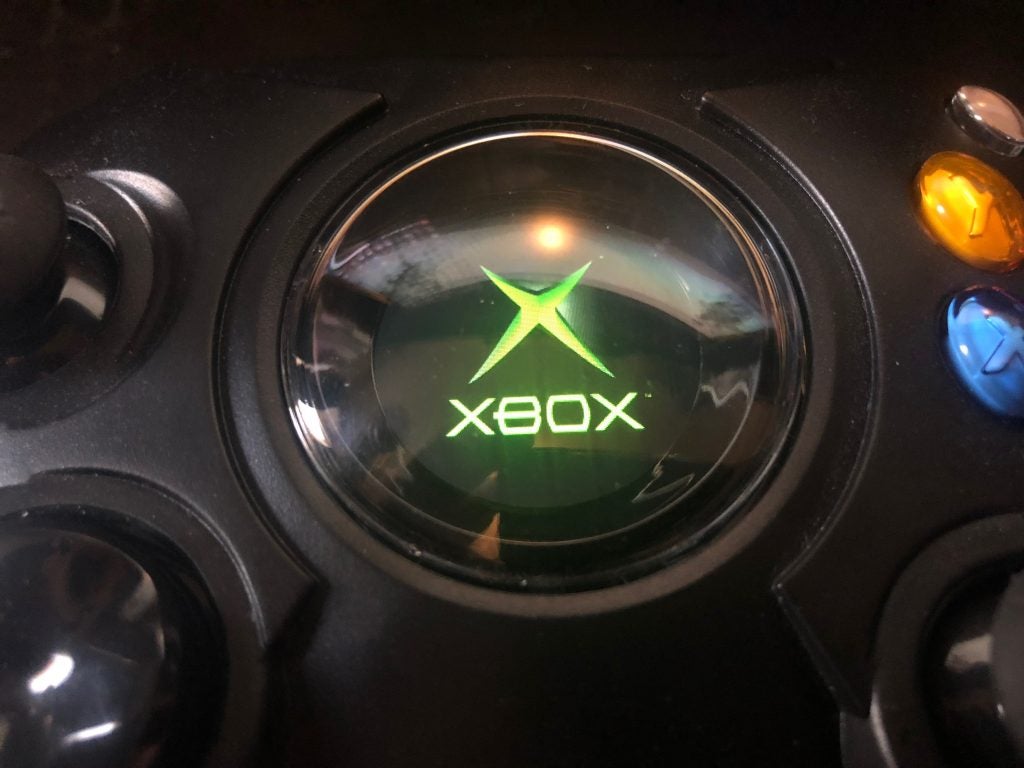 One of the most unfortunate things about the Hyperkin Duke is the lack of wireless functionality. The controller comes with a detachable USB cable, which is required in order for it to be used on either Xbox One or PC. This is, reportedly, due to a licensing clause with Microsoft that means only official first-party pads can be wireless for Xbox One.

Then there’s the centre of the controller, which comes equipped with a circular AMOLED screen in place of the original version’s giant Xbox logo. This display is actually a functioning button that, when pressed, will play a short video of the original Xbox’s startup screen.

It’s a neat little trick to bring you back to the good ol’ days of playing the original system, though it seems a little wasted in practice. I found myself wondering what other functions the little screen could have been used for in addition to nostalgia.

Hyperkin’s rebooted Duke is available in two colour schemes – the original black that launched with the Xbox all those years ago and a translucent green variant that launched alongside a similarly translucent green Xbox some years later. Both pads are impressively accurate replicas but there’s definitely something more eye-catching about the vaguely Halo-influenced green model. 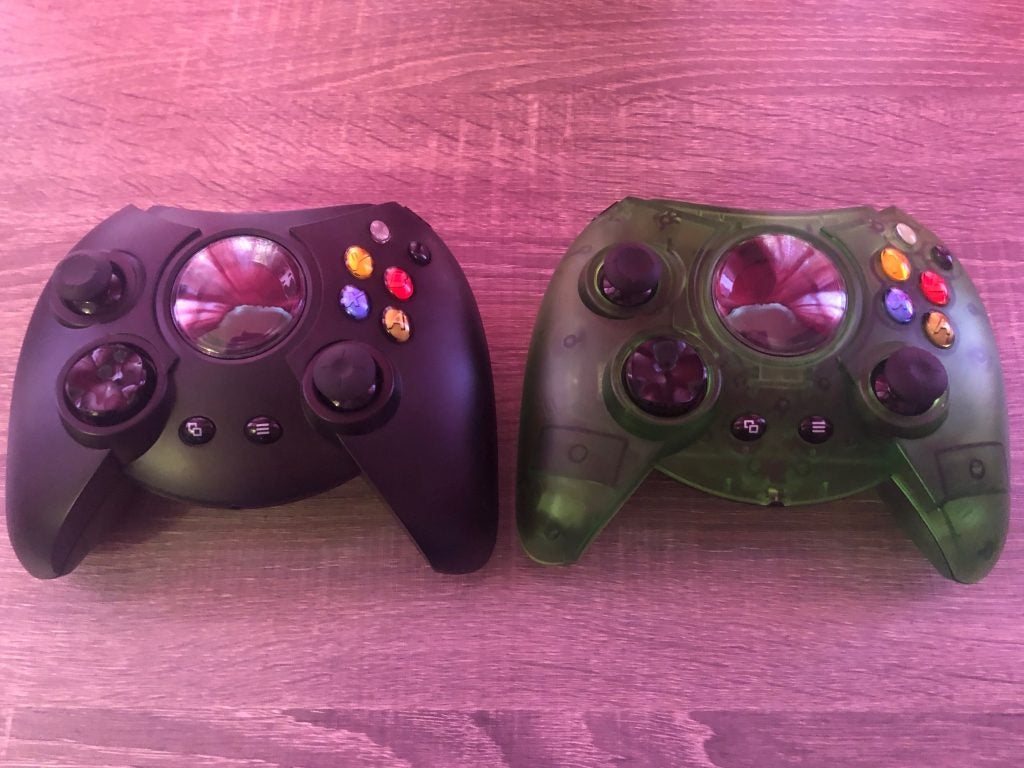 The Hyperkin Duke is a surprisingly solid and fun-to-use controller. The build quality is very good, the whole pad feels sturdy and I can attest to it being able to survive a couple of falls from a desk onto the floor without a scratch. This is a pad that feels sturdy and significant when you hold it.

If you’ve been using modern gaming controllers, particularly Xbox 360 or Xbox One pads, for a while, and have grown accustomed to the layout, your muscle memory will betray you the first few times you try out the Duke. The small, raised bumpers and the slanted face buttons feel ever-so-slightly alien now, and while playing through Dark Souls Remastered using this controller, I found myself accidentally hitting more than one button at a time in a frantic moment.

After getting used to the Duke’s button layout, though, I’ve found this to be a very enjoyable pad to use, particularly for PC gaming. The controller is recognised by Windows 10 as an XINPUT device, so the vast majority of games available on Steam or GOG will instantly know it and set the button layouts appropriately.

It’s a real shame that this controller couldn’t be made as a wireless one, and while you’ll get a 9-foot micro USB cable in the box, which should be long enough to fit into most gaming set-ups, it’s still a shame not to see a truly wireless model available. 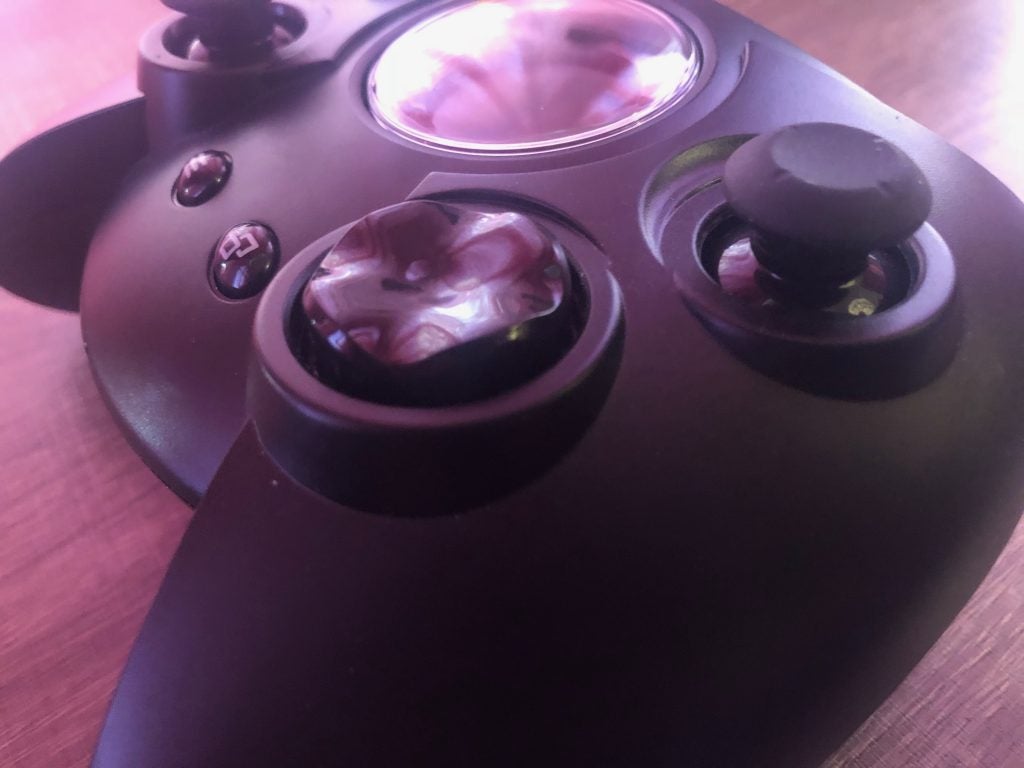 Why buy the Hyperkin Xbox One Duke Controller?

The Hyperkin Duke, by design, is not a controller for everyone. It’s a near-perfect replica of the original Xbox’s launch controller and, as such, is a welcome return for some. If you’re someone that looks back fondly on the oversized controller that came with the console all those years ago, you should absolutely pick up this controller. It’s a faithful recreation of the original Duke and packs in some lovely new features on top. You’re not going to be getting anything mindblowing, but the Hyperkin Duke is something very unique on the market right now.

That said, if you don’t already have that built-in nostalgia, it’s a little harder to recommend. I’ve found my time with this controller to be very enjoyable after an initial awkward period, but this is, at its core, a wired controller with an RRP of £69.99 / $70. As much as I’ve enjoyed the Hyperkin Duke, that price-point is a big ask for a third-party controller, let alone a wired one. If you don’t already look back on the original Duke with rose-tinted glasses,you might be better off picking up an official wireless Xbox One controller for less money.

Hyperkin has done a genuinely great job of recreating a classic and somewhat underappreciated controller from yesteryear. There is enough modernisation to make it a great controller to use for Xbox One and PC gaming, though the lack of wireless and the high cost are huge drawbacks. Still, if you have a particular fondness for the original Xbox controller, this is a must-have.