Humax currently offers you two ways to watch live TV on your iOS device. There’s the Tizi, which it has rebranded as the Tivizen, and is selling for around £100. It’s an external, battery powered TV tuner that sets itself up as a Wi-Fi hotspot which you can then use to steam TV to your iOS device via an app. However, if you’ve got an iPhone 4S or an iPad 2 or 3 you can instead opt for the Tivizen Dongle for iPad that we’re looking at here. This is a simpler and cheaper device that plugs into the dock connector on you iOS device to turn it into a portable TV.

Thankfully the Tivizen Dongle for iPad (it’s also being sold as the Tizi Go with different software by some other manufacturers) is actually quite small and compact. Finished in gloss white with a small Tivizen logo stamped on the front, it measures just 30mm wide and sticks out by around 50mm from the bottom of your iPad when it’s attached to the dock connector. Unlike the Tizi, it doesn’t have a telescopic aerial, but instead just uses a loop aerial. This is simply a flexible piece of wire that loops from one side of the bottom edge of the dongle to the other. 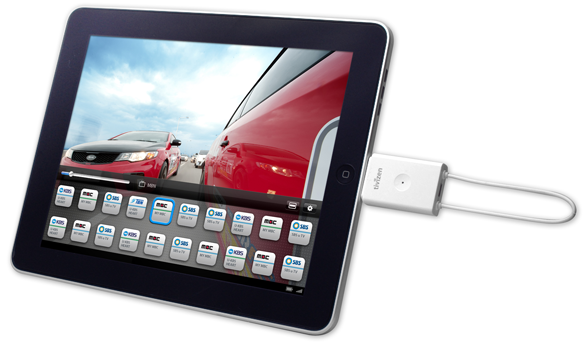 The dongle doesn’t draw power from your iPad when it’s being used as it has its own Lithium Ion 250mAh battery built-in. You charge this using the supplied USB adaptor cable that plugs into the micro USB port hidden between the two points where the loop aerial connects to the dongle.

There’s also a small LED light on the top of the dongle that glows red while it’s charging and turns green once the battery is fully topped up with juice. Charging it via a normal USB port on a computer (there’s no USB charger included in the box) will take around two hours and once it’s fully charged you’ll get around nine hours of TV watching from it. 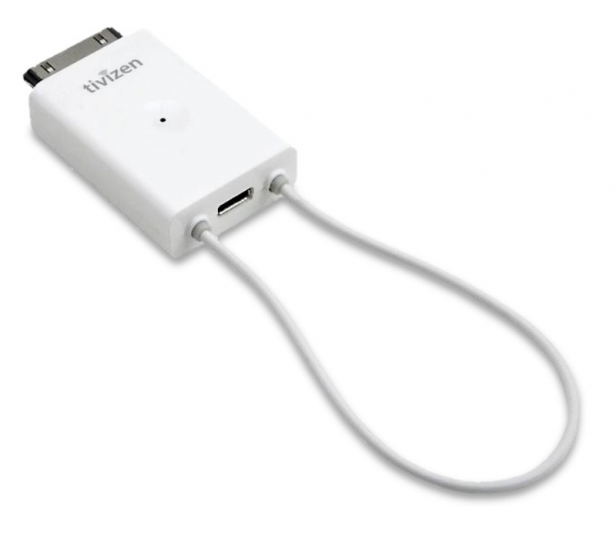 Free app
Of course, to use the dongle you first need to download the Tivizen app. This is free and once it’s installed on your iPad it automatically starts up every time you plug the dongle into the bottom of your tablet.

When you first run the app you’re asked to choose your country and after you’ve made your selection it scans all the available channels. This only takes a couple of minutes.

On the Humax website there’s a warning that this product is only suitable for use in strong signal areas. We used it in East London near the Olympic site. This is around 17km away from the Crystal Palace transmission tower, so we reckon it falls within a strong signal area, especially as you can get pretty good reception using an indoor aerial with a normal TV. 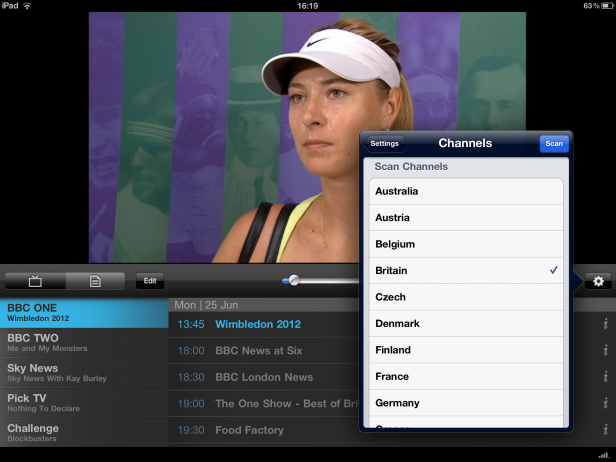 The first two times we performed the scan indoors, it failed to pick up the Freeview multiplex with the BBC channels. After this we took it outside to try scanning again and this time it did pick up the Beeb’s multiplex, but lost one of the other multiplexes. In fact during our testing we never got it to store all of the multiplexes at one time, so as a result there were always some channels missing, although these tended to be the minor ones.

What was strange was that once it found the BBC multiplex outdoors, it actually got good reception for the BBC channels indoors. In fact, the reception quality for all the channels it managed to pick up was impressive, especially given it uses such a small aerial.

We also like the app for the Humax Tivizen Dongle for iPad, as it’s nicely presented and easy to use. The default view shows the currently selected channel in the top half of the screen with a large EPG displayed at the bottom. The right-hand side of the EPG shows a scrollable list of channels, while the right hand side displays a list of the programs on the currently selected channel that are coming up over the next eight days. There’s also an ‘i’ button next to each program entry that you can tap on to call up a description of the show or movie.

In a thin banner separating the video windows from the EPG, you’ll find a slider for controlling the volume and a record button that you can tap on to instantly start recording the current show to your iPad’s memory. 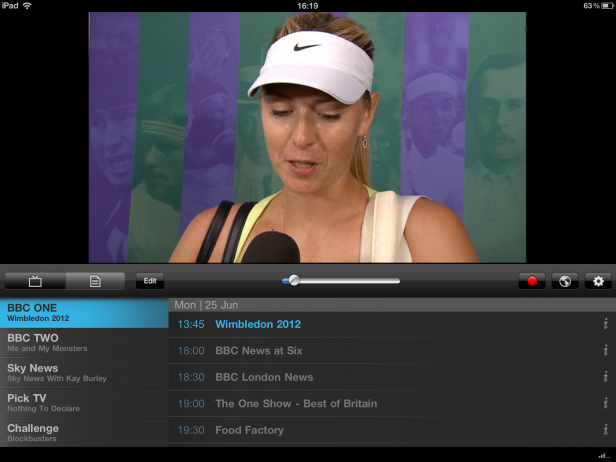 Extra features
Next to this record button there’s an icon with a globe on it. Hit this and the video windows gets reduced to a thumbnail in the top left of the screen while a web browser window fills the rest of the screen space. This isn’t the standard Safari browser, as there’s no search box and your existing bookmarks aren’t available. However, allowing you to continue watching TV while surfing the web really is a neat addition to the product. 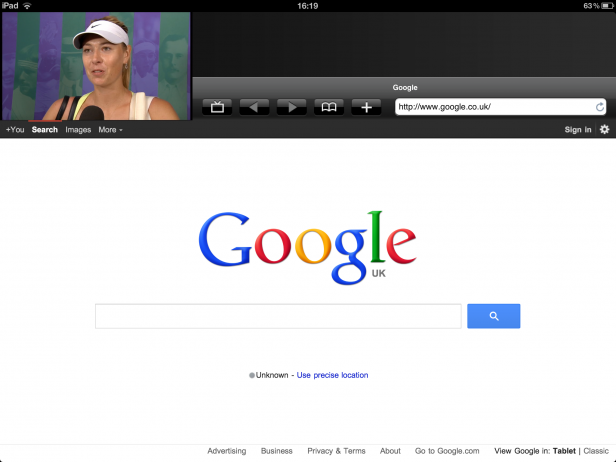 If you tap the video thumbnail window at any time, whether you’re in the browser or on the EPG screen, the app will switch to showing the current channel full screen. It’s all pretty straightforward stuff, but there are a few niggles.

First, it doesn’t sort the channels into their correct order. Instead you end up with a pretty jumbled channel line up. For example, Sky News and Pick TV were first and second in the list with BBC One and BBC Two relegated to channel numbers ten and eleven. Luckily you can edit the channel list to move them around, but it’s a bit of a laborious process.

The other problem relates to recording. You can’t schedule recordings using the software. Instead you can only start a recording of something you’re currently watching. This is a shame as it means that if you spot an upcoming movie that you’d like to watch later on your iPad you have to manually start the recording as there’s no way to have the software do it for you. 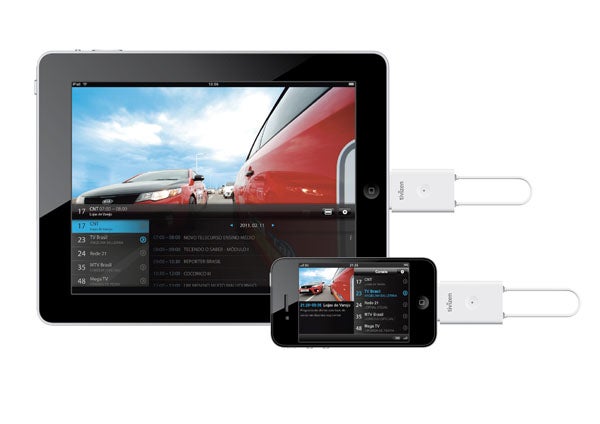 Also, the TV tuner is only a DVB-T model, so it doesn’t support DVB-T2 broadcasts. This means it doesn’t support HD channels, which is a shame as they would have looked superb on the iPad 3’s retina display. Also, you’ll have problems using it in some other European countries, such as Ireland, where even SD channels are broadcast as MPEG 4 streams.

Verdict
The Humax Tivizen Dongle is a decent option if you want to be able to watch live TV on the go and not rely on streaming apps such as TVCatchup. However, you definitely need to be in a very strong reception area to get the best performance from it and while the related app is easy to use it’s also missing some key features, such as the ability to schedule recordings.