The STE1000BSW is the second model to emerge from Humax’s ‘Blade’ range of soundbars, so called because of their astonishingly slim dimensions – the world’s slimmest, in fact. The ‘1000’ in the model number refers to its 1m width, some 200mm narrower than the STA-1200BSW which scored 7/10 in our recent review. That makes it better suited to smaller TVs, ideally between 40 and 50in.

As well as its smaller dimensions and lower price, Humax says this version boasts enhanced sound quality too, with a greater total power output than the 1200 (160W), 100W of which comes from the wired passive subwoofer.

Like its bigger brother, the STE1000BSW’s design really is a sight to behold. The main speaker is a wafer-thin bar measuring a staggering 20mm deep by 47mm high, which is crying out to be wall-mounted. Obviously that doesn’t leave a lot of room for Humax’s design team to express themselves, but they’ve worked wonders with what they have by curving off the top and bottom edges and dressing it in a classy black finish.

Build quality is also impressive – the use of aluminium instead of plastic gives the bar a solid, robust feel that exceeds what we expected for the price. Where it falls down is the tabletop stand, a flimsy piece of plastic that feels like it could snap with minimal pressure. On the plus side, the bar sits snugly inside and tilts it upwards to improve dispersion.

On the front of the bar is a discreet touch sensitive control panel that allows you to adjust volume and switch inputs, while a row of tiny LEDs indicate power, sound mode and Bluetooth status. There’s no LED readout but it’s not really needed.

Surprisingly all the sockets are squeezed onto the back of the soundbar itself, not the sub. There aren’t that many though – just optical digital and 3.5mm analogue inputs, plus ports for the AC adapter and 3m subwoofer cable. The digital input should suffice for most users, forming a simple single-cable connection with a TV, although the lack of HDMIs might be a deal breaker for some.

The subwoofer’s build quality may not be the height of luxury but its compact size makes it easy to accommodate. It’s fairly attractive too, finished in black with a curvy port on the front and a removable cloth grille on the back concealing the driver. 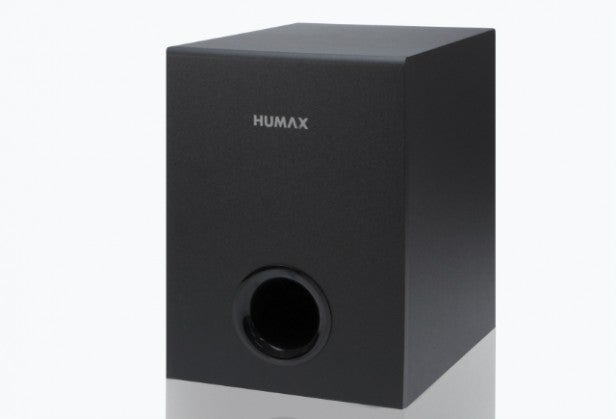 The STE1000BSW boasts built-in Bluetooth for easy mobile music playback – surely the bare minimum for any self-respecting soundbar – plus a Bass Enhancer mode that boosts low frequencies and a Surround mode that attempts to deliver a ‘powerful cinema sound effect’.

That’s your lot though – there’s no Dolby Digital/DTS decoding, apt-X or NFC pairing. But given the unit’s design and affordable price tag we can cut Humax a little slack here.

On board power is quoted at 160W, with 60W from the front speakers and 100W from the sub. The soundbar features two midrange drivers and a pair of tweeters. 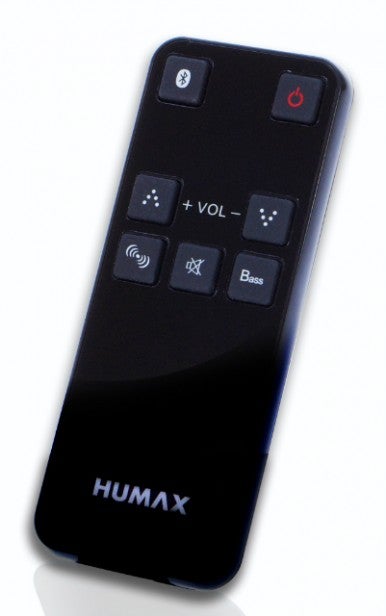 In the box are wall mounting brackets as well as an optical digital cable and 3.5mm minijack cable. If you’re not wall-mounting, setup takes seconds – just sit the bar in the stand, connect your cables and you’re done.

It comes with a small gloss-black remote, a definite step up from the cheap credit card style remotes that come with many soundbars. There are just seven rubber buttons, which are thoughtfully laid out and clearly marked with their relevant functions. Dedicated buttons for Bluetooth and each sound mode are welcome, but there’s no input selection key to switch between optical and analogue – it does this automatically.

LEDs on the front light up when each sound mode is activated and the red light flashes when adjusting the volume. It’s hard to see from the sofa but that aside it’s child’s play. There are no EQ modes or bass/treble adjustments.

The STA1200BSW’s audio performance left us feeling a little flat, and sadly its little brother gives us a distinct sense of déjà vu.

After giving it a while to warm up, we played Thor: The Dark World on Blu-ray and at first the Humax seems to do a good job, conveying the action with audible gusto and healthy volume.

During Thor’s clash with Malekith at the end of the movie, our hammer-wielding hero sends his foe crashing through stone pillars with an aggressive crunch, while cars clatter forcefully through the Nine Realms. Its crisp high-frequency reproduction can also be heard in the tinkle of shattering glass and the hiss of wind as the convergence approaches.

This dynamic sound will seem like a breath of fresh air after tolerating TV speakers for too long. But after a while the system’s limitations start to rear their ugly head. The main problem is the subwoofer, which is too overpowering and poorly integrated. It chuffs and rumbles indistinctly during the movie’s action scenes, rarely sounding like part of a cohesive whole. 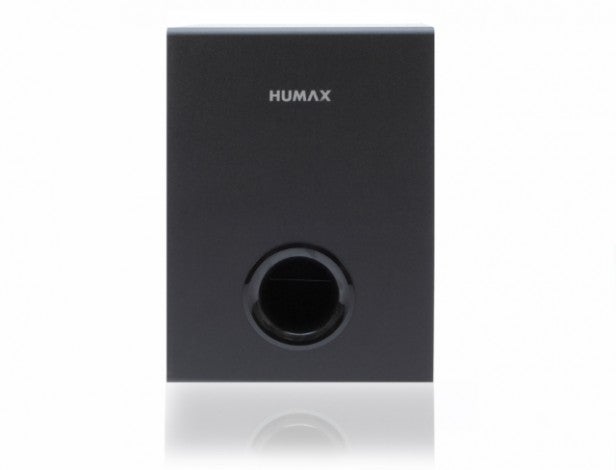 We wouldn’t do this under normal circumstances, but unplug the sub and you can hear where much of the problem lies. On its own, the soundbar offers a thin, compressed sound with practically no bass extension – hardly surprising given the size of the drivers and the lack of cabinet volume – which explains why the subwoofer doesn’t integrate particularly well with the soundbar and ends up sounding dominant and disjointed. Activating the Bass mode makes matters worse.

Another issue is that the Humax doesn’t cope brilliantly at high volumes. It strains when conveying aggressive effects (you can feel jets of air shooting out of the speaker mesh when the going gets really tough) which can be hard on the eardrums.

We quite like the effect of the surround mode, which makes the sound more open and more forceful, but it’s best left alone for music playback.

The Humax is much better suited to TV material where there isn’t such a demand on the speakers. Predominantly speech-based programmes like the news or game shows sound clear and authoritative, while soaps and dramas benefit from an extra kick without the negative side effects of bass-heavy movies.

What’s more, the problems outlined above don’t affect music playback quite to the same degree, resulting in more enjoyable sound quality. The subwoofer offers decent bass depth and keeps time with fast basslines surprisingly well, while the crisp top-end reproduction allows percussion to shine through. Vocals and instrument solos can sound a little ripe but for day-to-day listening it’s fine.

Should I buy the Humax STE1000BSW?

As a technical feat, the STE1000BSW is astonishing – quite how Humax has managed to cram everything into such a skinny, stylish soundbar beggars belief. From a design perspective it’s perfect for anyone who wants a sound system that keeps clutter to an absolute minimum, while the inclusion of Bluetooth is highly convenient.

Unfortunately, this super skinny design brings compromised sound quality, particularly when playing movies. The soundbar’s narrow frequency range sound leaves too much for the subwoofer to do, making bass seem disjoined and poorly integrated. It also distorts slightly at high volumes, which affects your enjoyment of action movies. It sounds better with TV and music, but doesn’t blow us away.

So if you like the idea of owning the world’s slimmest soundbar then by all means give this Blade a whirl, but if poor sound quality is the price we have to pay then we’ll take a bigger, chunkier speaker any day of the week.

This super-slim soundbar’s clutter-busting design is a treat for the eyes, but its poorly integrated bass and intolerance of loud volumes means it’s not quite so good on the ears.