For most people, the biggest turn offs about the home cinema dream are cost and clutter. Which just so happen to be the two issues Humax’s LP40-TDR1 LCD TV tries especially hard to address.


When it comes to reducing clutter, the ‘killer app’ of the LP40 is its Freeview Playback capability, meaning that it has a fully featured hard disk recording system built into its body. There’s no need for a separate recorder box, or the attendant cabling that would require.


In terms of cost, you can get your hands on the LP40’s still very rare, subscription-free built-in Freeview Playback system, plus its big old 40in LCD screen, for the extremely aggressive price of £690. That’s less than many ‘vanilla’ 32in LCD TVs. So are we looking at the bargain of the year, or what?


If you’re the sort of person who just likes to get a lot of sheer hardware for your buck, the LP40’s design will have you on cloud 9. It really is a brute of a thing, featuring a much wider bezel than is common these days, and sticking out round the back a country mile versus the increasingly skinny efforts of most of today’s ‘flat’ TVs. People with dodgy backs should also note that it weighs a relative ton. 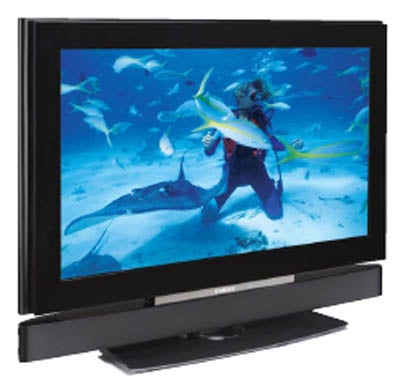 There is, at least, one potential performance benefit to the TV’s bulk, though, since its speaker system is so large that it’s almost a separate element, sitting half an inch or so below the main screen like some kind of these new-fangled ‘sound bar’ thingies. If this audio approach can’t deliver a richer sound performance than the increasingly invisible speakers found in the majority of flat TV rivals, we’ll be very disappointed indeed.


At this point I probably should add that as you can tell from our pictures of the LP40, its size doesn’t necessarily make it ugly – just unfashionable.


Craning our necks around the LP40’s substantial rear uncovers a nasty surprise: just one HDMI input. Convinced we must have missed something, we checked the TV’s sides out for more, but to no avail. The LP40 apparently doesn’t think that its owners will want to add more than one of such various HDMI sources as an upscaling DVD player, an Xbox 360 Elite console, a PS3 console, or an HDMI-sporting PC. Er, cheers.


What’s more, the HDMI provided is only built to the now out-dated V1.2 specification, denying you support for the enhanced picture quality possible via the high-bandwidth Deep Color and xvYCC image formats.


Although it’s entirely possible that many of our readers simply will not be able to see past the single HDMI cock-up, I should say that in other ways connectivity isn’t actually bad, with a dedicated PC port, component video jack and digital audio output catching the eye.

You’ll note that I was careful to exclude a Sky HD box from the list of HDMI-sporting sources I provided a moment ago, for the simple reason that anyone buying a Freeview Playback TV will surely only be getting one because they’ve made a conscious decision not to go the Sky digital TV route.


This same argument perhaps defends another limitation of the LP40: its native resolution of 1,366 x 768 rather than the full HD resolution we’re increasingly starting to expect on screens of 40in or more. After all, Freeview channels currently only broadcast in standard definition, so it arguably makes sense for a Freeview-focussed TV like the LP40 to only have to ‘rescale’ terrestrial digital broadcasts up to 1,366 x 768 rather than the more processing-intensive (and therefore potentially more messy) 1,920 x 1,080 level.


Other key specs of the LP40 find a not particularly high claimed contrast ratio of 2000:1, and the facility to play 1080p/24 inputs of the sort now delivered by the majority of Blu-ray players. Plus, of course, there’s the small matter of the LP40’s built-in hard disk drive, which is a 160GB affair able to hold up to 100 hours of recordings depending on what picture quality you choose to record in. Three quality options are available: HQ (the best video standard but the most disk space intensive); SP (a balance between quality and memory); and LP, which offers the lowest image quality but uses the least amount of space. 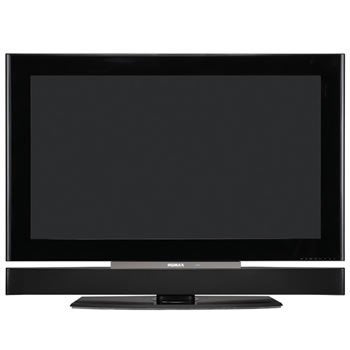 Initially this sort of recording quality flexibility sounds very likeable. But actually it points towards a potentially quite severe flaw in the LP40’s recording system, namely that it doesn’t simply store away the digital bitstream of whatever Freeview broadcast it is you want to record.


And so unlike LG’s Freeview Playback TVs, which DO record the direct digital stream, there’s potential for the Humax system to reduce the picture quality as it goes through the process of converting the digital bitstream into something its HDD can recognise. Hmm.


In other ways, at least, the Humax Freeview Playback system is pretty much on a par with that seen in LG’s impressive rival sets, with such functionality as Series Link setting, pausing live TV and ‘chasing’ live broadcasts all possible. You also get the same weakness versus Sky’s Sky+ or Sky HD receivers, though, in that you can only record one digital channel at a time, not two.


If I had to pick between the LG and Humax sets in terms of ease of use, though, the Humax would come second, with neither its onscreen menus nor remote control feeling quite as intuitive when trying to make and navigate recordings as those of the LG sets.


Starting our tests of the LP40’s performance with its recordings, our fears about the ‘non-direct’ recording of digital broadcasts are realised. For even using the TV’s top-level HQ recording mode, recorded pictures look noticeably grainier and noisier than the original broadcasts – a far cry from the pixel for pixel perfection of LG’s Freeview Playback sets.


Step down to the SP mode and things deteriorate further, but I guess could still be considered watchable. But I wouldn’t personally use the LP mode at all unless you have a nostalgic fondness for your old VCR.

The lack of recording quality is unfortunately emphasised by the fact that the picture quality from the LP40’s screen with original Freeview broadcasts is actually very respectable. Not least because noise levels are actually rather well suppressed for such an affordable TV, with surprisingly little grittiness or MPEG fluttering to divert your attention from what you’re watching.


Even better, this relative freedom from noise with standard definition sources doesn’t come at the expense of sharpness – a trait that’s reinforced when watching HD content, as the set does a neat job of portraying the lovely extra detail, depth and clarity visible during, say, the opening jungle sequences of Apocalypto on Blu-ray.

The general lack of noise during standard and high-definition sources suggests, too, that the LP40’s image scaling is pretty effective for a budget LCD TV.


The shots of the panther pursuing our hero through this jungle later on in the film reveal the set to have respectable black levels for its money too, with less greying over the panther’s skin than we would have anticipated. Though it is a bit tricky to make out any sort of detail in the panther’s fur, thanks to a lack of shadow detail finesse. 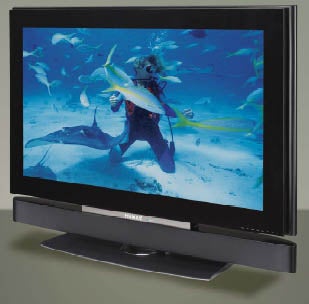 Sticking with Mel Gibson’s Mayan epic, the LP40 also does quite well with its colours, portraying the verdant jungles with verve and a passably authentic rich green tone, and not struggling as severely with the film’s tricky skin tone variations as we might have expected.


During the aforementioned panther sequence, too, it’s noticeable that the LP40’s picture also suffers less with motion blur than many of its cut-price peers.

Against all this mostly positive work you have to set some small but still slightly annoying light bleed from the screen’s corners (though this is only visible during very dark shots), the occasional off-key colour tone (especially during standard def viewing), and a lack of shadow detail subtlety which is why, as previously mentioned, you can’t really make out any fine detail in the Apocalypto panther’s fur.


One final little gripe most obvious while playing games is a tendency to leave a small ‘trail’ behind fast-moving objects or scenery elements. Though to be fair, this sort of lagging error is hardly rare in the affordable LCD world.


What is rare in the affordable LCD world, though, is sound quality as good as that of the LP40. That ‘speaker bar’ effect delivers fully on the promise suggested by its size, pumping out more power than half a dozen normal LCD TVs put together, and fleshing out Apocalypto’s action scenes with some impressive dynamics together with a much greater bass-to-treble extension than we’re used to hearing from a flat TV. Excellent.


For its money, there’s no doubt whatsoever that the Humax LP40-TDR1 has a lot to offer in terms of general picture quality, some of its features, and sound quality. But before you all rush out to buy one, don’t forget that its recordings are fundamentally flawed, while its provision of just one HDMI is frankly ridiculous.