You know how at school there’s always that one slightly strange kid who doesn’t dress like anyone else and likes to do everything in his own unique way? Well, that kid has taken TV form in the extremely unusual shape of Humax’s LGB-22DYT.


As its name suggests, this is a 22in TV – itself a change of pace from the giants we tend to find dominating our test benches. But it’s also unlike any other small-screen LCD TV we’ve ever seen, for two reasons.


First of all, whereas most little tellies are happy to sit on a small, flimsy desktop stand, the 22DYT erupts from something that looks for all the world like a fairly substantial ‘sound bar’ speaker. Which is a pretty fitting description, as it happens, for that’s pretty much what it is!


Yes, Humax has recognised that trying to fit speakers into a small LCD TV’s bodywork in any ‘normal’ way pretty much leads to sound quality that’s the crap side of rubbish. So the brand has taken the radical step of removing those speakers from the TV and incorporating them into the stand. 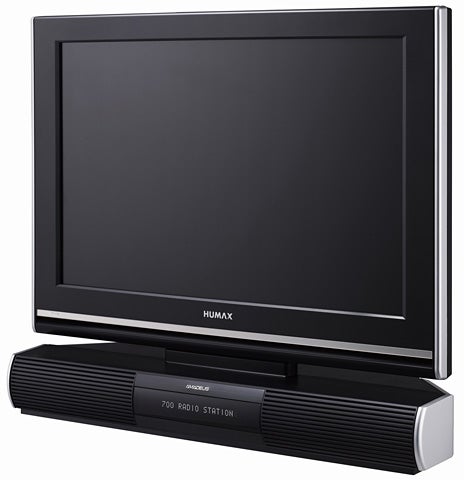 I have to say, though, that I’m not sure this idea works aesthetically. For while a similar idea on the 40in Humax LP40-TDR1 TV we tested recently looked OK, on a TV as small as this the speaker bar somehow looks too dominant, taking your eye away from the picture you’re supposed to be watching. It also looks a bit clumsy and dated, as if it’s escaped from some 1980s conceptual design exhibition.


Still, the LGB-22DYT is almost certainly going to find use as a second or third TV, not a main one. So it won’t have to go on show in your main living room where it might embarrass you when anyone pops round to visit.


Plus, of course, there’s always the possibility that your reward for taking onboard such an ‘unconventional’ design will be audio quality the likes of which has never before been heard from a small TV.


Anyway, going back to our initial discussion about just why the 22DYT stands out from the crowd, as well as its ‘speaker bar stand’, it’s also got an atypical native resolution of 1,680 x 1,050. This is clearly enough to let the TV earn its HD Ready wings, but not quite enough to make it a full HD set. Odd.


To be honest, I suspect the reason for the ‘inbetween’ resolution is the fact that the screen at the system’s heart was probably originally developed for PC rather than video use. Here’s hoping neither the resolution nor the suspected PC origins will lead to any problems with the TV’s picture quality.

The 22DYT has one or two interesting discussion points among its connections, too. First, there’s a disappointment: the provision of just a single HDMI socket. I guess a 22in TV is never exactly going to become the hub of any all-singing, all-dancing home cinema system. But it’s certainly possible that someone might want to simultaneously attach a PS3 or Xbox Elite games console and an upscaling DVD player even to a second-room TV.


Rather more pleasing is the provision of a D-Sub PC input, and everything you need to enjoy the UK’s digital terrestrial broadcasting service – including a Common Interface slot for adding a Top Up TV subscription card. Please note, though, that this is not one of Humax’s TVs with a built-in HDD for making Freeview recordings. For that functionality you’ll have to step up to the £380 LGB-22DRT.

Although you can find cheaper 22in TVs if you look around, the 22DYT is hardly expensive at just under £300. So it’s no great surprise to find it relatively low on features beyond those we’ve already mentioned. The only things of interest I could rustle up are SRS TruSurround XT audio processing to try and make that speaker bar reproduce some sense of a surround sound audio track; a handy radio alarm/snooze function; a clock function available on the front display; and a skin tone correction option.


To be honest, though, I’m actually rather glad there aren’t loads of features to get my head round, for the simple reason that the onscreen menus are a nightmare to read. Their text is way too small and this situation is compounded by the fact that the backdrop to the text is semi-opaque. Honestly, it’s hard to believe anyone at Humax has actually sat down and tried to use the TV at all in a normal room environment.

The 22DYT’s picture performance is just about as mixed a bag as I’ve ever come across, in that while it gets a few things surprisingly right, it gets a couple of others disturbingly wrong.


Let’s get this ‘wrong stuff’ out of the way first. My single biggest gripe with the set is that its odd native resolution causes it to show widescreen material using an incorrect aspect ratio. For instance, when feeding in the superb Sky HD broadcast of ”The Italian Job”, it’s blatantly obvious right away that the picture just doesn’t look quite right. The first thing you notice is that the black bars to the top and bottom of the picture don’t look as proportionally wide as they should. But then you also notice that Charlie and his gang all look considerably taller and thinner than normal, thanks to the way the 22DYT is stretching the image out vertically.


Actually, this problem doesn’t even just affect widescreen stuff, either. Switch the set into its 4:3 mode, and the image still looks noticeably stretched.


Although the degree to which you notice the aspect ratio problem varies according to the content of the image you’re watching at any given moment, it’s a problem that can prove regularly distracting, and which really should not be there at all.

The second fairly fundamental weakness with the 22DYT’s pictures concerns its colours. They don’t look particularly rich or vibrant, for starters. But worse, they also look a bit washed out, with some skin tones in particular having a distinctly sickly pallor.


A lesser shortcoming but one still worth mentioning concerns the 22DYT’s brightness. The TV’s spec sheet claims an unusually low brightness output of just 300cd/m2 (versus more like 500cd/m2 for most LCD TVs), and this seems reflected in the way the picture struggles to make its presence felt in a bright room.


Turning now to the TV’s good points, its picture is impressively sharp for such a little chap. So much so, in fact, that I could appreciate the difference between standard and high definition much more clearly than I expected. 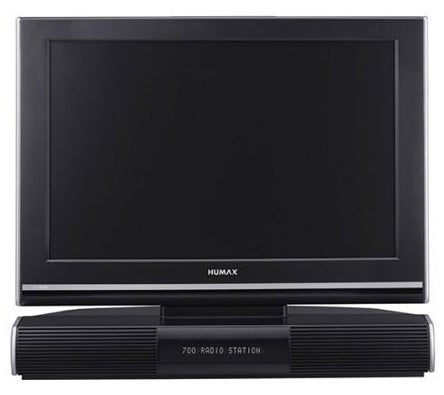 This is not meant to imply that the 22DYT’s standard definition is unusually soft or fuzzy. On the contrary, it’s actually very sharp and clean. I’m just saying that the TV has the ability to make HD look even better, despite the relative smallness of its screen!


The 22DYT is also respectable when it comes to black levels. Obviously there’s some degree of cloudiness over dark scenes such as a night-time helicopter ride over Liberty City in ”Grand Theft Auto IV”; I’ve yet to see a small LCD TV that hasn’t suffered with this LCD trait to some extent. But it’s by no means as distractingly bad as is common on screens smaller than 26in, and doesn’t leave you with a sense that great chunks of Liberty City’s impressive vistas are getting lost in the murk.


The 22DYT’s last real picture talent is arguably the most surprising: its freedom from motion blur. Well, maybe ‘freedom’ is overstating things a bit; there is certainly a trace of the familiar resolution loss as the red, white and blue Mini Coopers find their way out of Turin. But it’s far, far less of an issue than I’d expect to see on such a small and affordable set.


The last thing to cover is whether or not the 22DYT’s remarkably large set of speakers really make their size count. And the simple answer to that is yes, they do. The clarity, dynamic range and sheer power of the soundstage the 22DYT creates is startling, making it instantly, for my money, the finest sounding small TV I’ve ever heard. In fact, now I come to think of it the majority of big LCD TVs don’t sound this good either!


The Humax LGB-22DYT tries hard to please, and amid its almost eccentric approach there are a few things to admire. But the curious aspect ratio disrupts far too much of what you watch for comfort, the single HDMI is hardly enough even for second-room use, and the colour and brightness issues aren’t going to go away either.