Today is a good day to be my back. Just for once I’ve been able to take a break from hoicking around the sort of monstrously large TVs that seem to be all the rage these days in favour of something you can easily tuck under your arm.


That ‘something’ is the Humax LGB-19DTT: a 19in LCD TV which, despite its smallness and low £240 cost, boasts a built-in digital tuner and HD Ready specification. In other words, it has the potential to be a pretty much perfect option for a kitchen, study, bedroom or child’s room. All that it needs to do to finish the job is perform well. 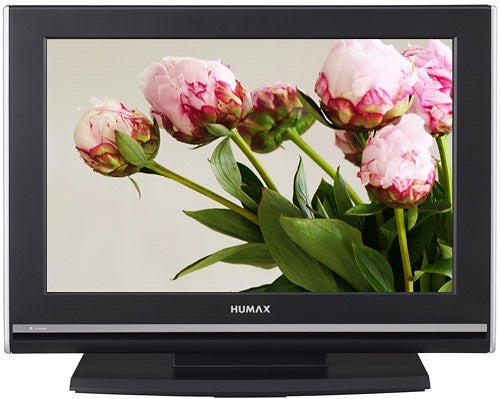 Considering how affordable it is, the 19DTT is rather good-looking by small TV standards. Its combination of a matt black bezel with a silver outer trim and shiny silver strip running along near the bottom edge resembles the current fashion among large LCD TVs right now, and is certainly a cut above the cheapo grey plastic adorned by many of its rivals. What’s more, if you don’t fancy the black version I tested, the set is also available in white or pink (!) versions at no extra cost.


In keeping with its HD Ready credentials, meanwhile, the 19DTT has got both HDMI and component video inputs – both really impressive discoveries on what’s effectively a portable TV. Plus there’s a PC port so that you can double the screen up as computer monitor, and support for more ‘old-school’ fare in the shape of an RGB SCART, S-Video port and composite video input.

The good first impressions made so far merely grow with the discovery of a claimed 1,000:1 contrast ratio – easily the highest such figure we’ve yet seen from a small TV – and a surprisingly high resolution of 1,440 x 900 pixels.


Needless to say, this resolution means the 19DTT is built in a widescreen configuration rather than the ‘square’ still adopted by many sub-20in TVs – a very sensible move when you’ve got a built-in digital tuner that receives most of its programmes in widescreen.


After first being impressed by the 19DTT’s resolution, though, it suddenly struck me that it may not, after all, be quite so great as it first appears. For if you apply a quick bit of maths to 1,440 x 900, it turns out to deliver a native aspect ratio of 1.6:1 (or 16:10 widescreen) – which falls slightly short of the full 1.78:1 delivered by a true 16:9 widescreen TV or broadcast. Despite this, 16:10 widescreen is quite a common resolution on computer and notebook displays and is largely down to the fact that it’s cheaper to manufacture.

Low and behold, this aspect ratio discrepancy is indeed reflected in the TV’s pictures, as even if you choose the set’s ‘Full’ aspect ratio option, it’s clear that normal widescreen images aren’t quite fitting fully into the screen, with a little of the image missing from the top and bottom edges. It even seemed to my eyes as if a very small distortion was stretching the image vertically. Still, while this initially irritated me, I have to say that by the time I’d finished the testing, I’d already got used to it to the point where I didn’t really notice it any more.


The 19DTT’s specifications continue to impress with the discovery that the digital tuner comes with full MHEG application support and compatibility with the Freeview 7-day electronic programme guide. 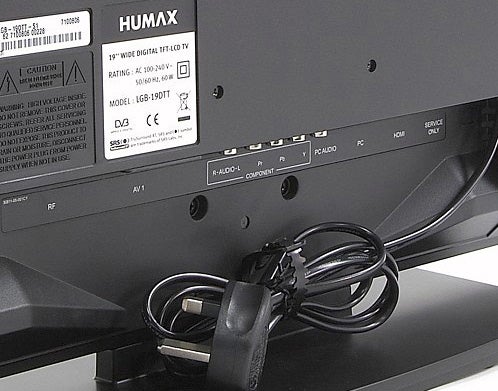 Elsewhere you can adjust such niceties as the backlight level and fleshtone balance, set alarm and snooze timers (reflecting the TV’s potential as a bedroom TV), and even call in an SRS TruSurroundXT pseudo-surround sound circuit! Given the puny sound produced by most small LCD TVs, this latter feature seems insanely optimistic, but hey – professional that I am, I’ll reserve my judgment until I’ve actually listened to it.


Starting off with the 19DTT’s pictures, though, to my surprise (given the set’s affordable price) I was pretty impressed by what it can do.

Take its black level response, for instance. Practically every small TV I’ve ever seen has suffered more or less dismally with LCD technology’s common problem with greyness over dark areas, yet the 19DTT really does have a fair stab at presenting a really quite believable representation of real black. 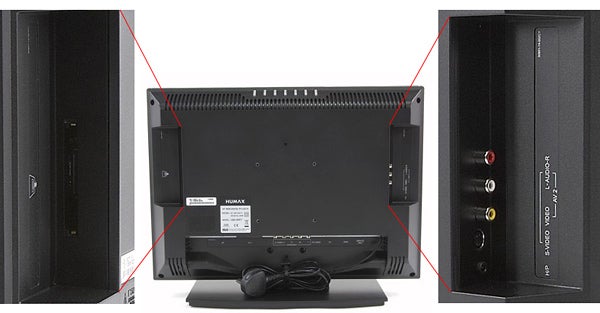 We’re not talking anything on a par with Pioneer’s KURO plasma TVs here, obviously; for instance, dark areas do still feel a bit hollow for all their black intensity. But we certainly are talking about suitably convincing black levels that allow you to actually enjoy a predominantly dark film like ”The Da Vinci Code”. Well, maybe ‘enjoy’ is a bit of a strong word for that particular film, but I think you know what I’m getting at.


It’s worth adding as a side note to this black level discussion that the 19DTT also scores over most small rivals by exhibiting relatively little backlight seepage. In other words, there are only really tiny strips of unwanted light over the picture’s top and bottom edges, rather than those nasty corner pools of light we often see.

As is so often the case, the 19DTT’s superior black levels help it produce an unusually natural palette of colours, especially with the Fleshtone feature engaged. And colours receive a further subtlety boost from the screen’s high resolution, as it allows blends to appear with surprisingly fine gradations.


More good news finds the picture looking pretty sharp and clean with standard and high definition sources alike, and this sense of clarity holds up even during action scenes thanks to some surprisingly good motion handling.


It has to be said that the difference made by the extra detail and clarity of HD sources is hard to appreciate fully on a screen this small. But considering the TV is so affordable, we guess you might as well have the HD Ready resolution rather than not, right? 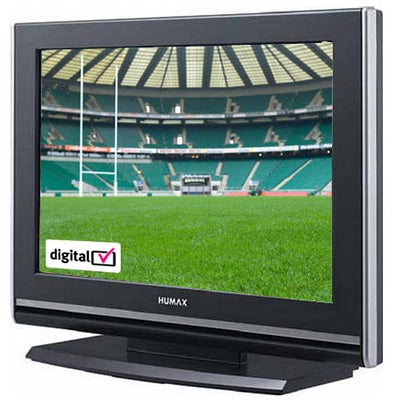 Really, there’s only one thing that lets the 19DTT’s pictures down substantially and that’s its brightness. The screen only claims an output of 300cd/m2, and this does seem reflected in the way dark areas tend to look rather hollow, as we mentioned earlier, and the way the picture loses its lustre in bright ambient lighting. Ideally you’ll watch this screen in a fairly darkened room – or at the very least you won’t place it slap bang in the middle of a kitchen’s sun-trap!


Moving on to the 19DTT’s sound, it’s par for the small LCD TV course. Which is to say, pretty useless. Things just about hold together during most ordinary TV viewing, but a film or high-octane drama really put it through the wringer. And as for that pseudo surround mode, forget it. I could discern hardly any difference in the sound whether the mode was active or not. Except that the pseudo surround actually sounded slightly worse than the normal stereo setting.


Perhaps inevitably for £240, the LGB-19DTT can’t escape all of the usual small LCD TV pitfalls. Its sound and brightness certainly fail to impress. Yet its black levels, colours and features roster do set it a notch higher than anything else of a similar size and price we’ve seen to date, so if you’re in the market for a small second-room TV, you’ll struggle to find anything better.