The HDR-1800T is an affordable Freeview+HD recorder equipped with a 320GB hard-disk drive and twin tuners. As well as providing access to the full gamut of Freeview channels, the HDR-1800T also lets you record up to 80 hours of high-definition programmes or up to 200 hours of standard definition.

The HDR-1800T’s black box design is unadventurous but attractive. At 320mm wide by 50mm high, Humax says it’s the most compact digital TV recorder to date, which means it’ll slot into tight AV shelves with minimal fuss, while the aluminium casing feels sturdy.

The fascia is minimally adorned with a few stylised buttons controlling power, volume and channel changing. A sliver of light peeps out from below the central ridge, glowing red when recording or blue when watching live TV. There’s no LED readout – everything you need to know is displayed onscreen.

On the back you’ll find a healthy set of sockets. There are HDMI, Scart and composite video outputs, plus analogue stereo and optical digital audio outs. Antiquated it may be, but the Scart output will please archivists who want to make DVDs or Blu-rays of their favourite TV series.

There’s also an Ethernet port to unlock the unit’s network functionality (more on that later) and a USB port for playback of video, music and photo files from flash drives and MP3 players. An optional Wi-Fi USB adapter is available but the fact it’s not built-in is disappointing. 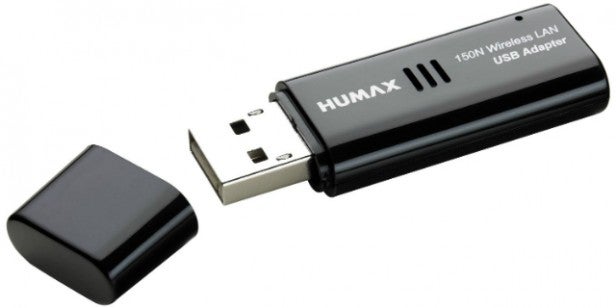 In the manual Humax talks about the HDR-1800T’s ability to record two channels simultaneously, but leaves out the best bit – you can watch a third channel while they’re recording, and not just ones on the same multiplex. Most twin-tuner recorders (including Sky+) only let you watch the two channels being recorded, but the Humax lets you continue surfing.

And like any PVR worth its salt the HDR-1800T lets you pause and rewind live TV, record a programme you’ve been watching from the two-hour memory buffer (Time Shifted Recording) or record an entire series at the touch of a button. Freeview staples like subtitles, audio description, digital text and interactive services are all supported.

On the networking side, Humax’s TV Portal brings you a selection of online content. It’s split into ‘Featured Apps’ and ‘My Apps’ – the former offers BBC iPlayer and YouTube, while the latter lets you install other apps from the App Market.

With the Ethernet port rigged up to your router, you can also stream your own content from DLNA servers on the same network as the HDR-1800T. The unit supports an impressive range of formats including MKV, AVCHD, AVI, DivX, WMV, XviD, MP3, AAC, WMA, WAV and JPEG.

Step up to the 1TB HDR-2000T and recording time increases to 250 hours of HD and 600 hours of SD, plus it comes with a wireless dongle in the box and adds BBC News, BBC
Sport and Picasa to the TV Portal.

The HDR-1800T is a really nice PVR to use. The welcoming onscreen presentation and uncomplicated menu layouts make it the perfect recorder for technophobes. The main menu is superimposed over the picture and displays colourful icons when you skip through the categories. From here you can access the channel list, TV Guide, TV Portal, setup menu and jump to video, music or photo content. 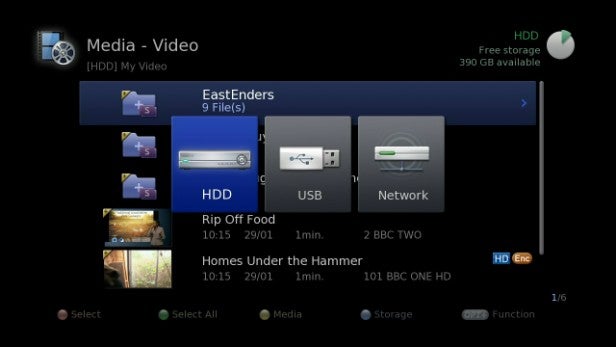 Surfing channels is easy – you can view the channel list, set up Favourite lists to weed out channels you never watch or browse programmes in the terrific electronic programme guide.

The EPG is attractive and cleverly organised. It packs in a seven-channel programme grid, live TV screen and brief synopsis without feeling cluttered, while retaining the large text and bold colours found elsewhere. Along the bottom are colour-coded options, one of which lets you search for programmes by keyword or genre. Another brings up a list of all your scheduled recordings. 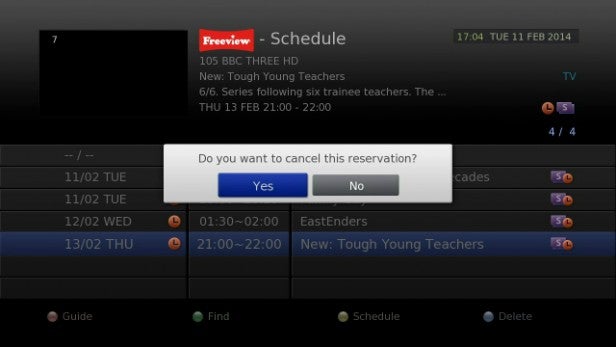 If you want to make a recording, just highlight it in the programme grid and hit OK. A dialogue box asks if you’d like to record the whole series, the whole programme or set a reminder. Easy peasy. If a recording conflicts with others, onscreen dialogue boxes let you select which one to cancel.

A scaled down version of the EPG called the i-Plate offers a quicker way of browsing. This banner appears at the bottom of the screen and displays all the relevant details about the current programme, as well as allowing you to look ahead at programmes on any channel for the rest of the week using the direction keys. It’s a godsend.

Browsing video, music and photo content is similarly easy thanks to a logical menu that displays a thumbnail for each file. You can easily switch between sources and content types using the blue and yellow buttons. Hit the Opt+ button and you can copy files from the HDD to a USB stick (or vice versa) – that goes for Freeview recordings too. 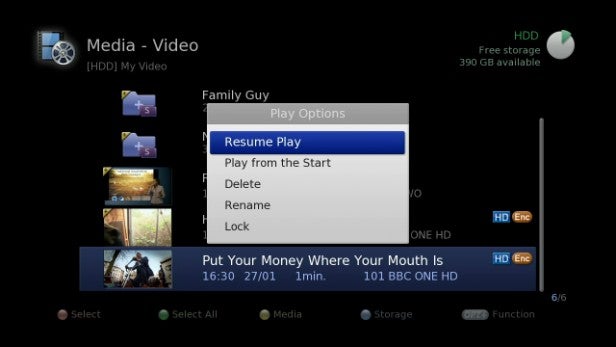 When browsing recorded Freeview programmes, the menu lacks the slickness and immediacy of the Sky+ planner but content is clearly listed with thumbnails and series linked shows are automatically placed in folders. 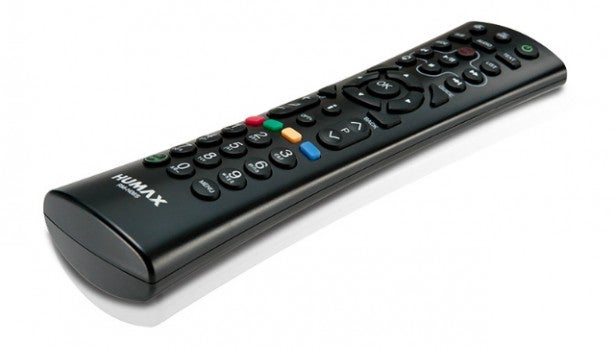 This effortless user experience is compounded by a superb remote aimed squarely at technophobes. This slender, curvy zapper boasts a sensible button layout and clear labelling. The central direction pad makes menu navigation a breeze, while playback keys are clearly marked at the top.

The HDR-1800T delivers solid and engaging hi-def Freeview pictures. The vibrant studio sets of The Jonathan Ross Show on ITV HD are faithfully rendered, with fulsome purples and deep blacks in the faux cityscapes behind Jonathan’s desk.

It easily renders fine patterns and textures like the yellow sofa fabric and the wood grain in the desk, while subtle shading and colour blends in clothing are smoothly reproduced. The guests’ impeccable skin tones are utterly believable despite the caked-on make up, and the image is consistently stable, with no signs of pixel break up or block noise.

The HDR-1800T uses a suitably high bitrate to ensure that there’s no drop in quality when you record TV shows on the HDD– they look identical to the live broadcast.

Switch to a standard-definition channel like regular ITV and cracks start to appear. The image is softer and there are clear signs of mosquito noise, particularly when faced with a lot of fast moving objects like the hyperactive studio audience of Take Me Out. But that’s just a feature of SD Freeview, not a fault of the Humax. To its credit, colour strength and fidelity is excellent and there’s a decent amount of detail in the picture.

If you’re looking for an affordable and easy to use Freeview recorder, we really can’t recommend the HDR-1800T highly enough. The slick, straightforward onscreen menus and foolproof remote make it a joy to operate, while the wide range of Freeview functionality – including the ability to record two channels and watch a third – provides all the recording flexibility you need.

But it’s more than just a PVR – with BBC iPlayer and YouTube on board you get a wealth of free video content at your fingertips, plus the wide range of supported media formats makes it an excellent entertainment hub for your DLNA and USB devices.

The only drawbacks are the lack of built-in Wi-Fi and web apps found on the step-up HDR-2000T, but for £150 these are hardly deal-breakers.

A nicely priced, user-friendly Freeview PVR that does the basics brilliantly and throws in some nifty network functionality for good measure.