The HDR-1100S is a Freesat recorder with Freetime, the smart TV service that allows you to watch on-demand content from the past seven days.

With access to more than 200 subscription-free TV and radio channels, and a built-in 500GB hard disk to record them on, it’s the ideal alternative to costly services such as Sky and Virgin. And since it’s beamed to your home via satellite, you‘re not at the mercy of poor digital terrestrial reception.

Even better news is that unlike previous Humax Freetime recorders, the HDR-1100S is equipped with built-in Wi-Fi, making it even easier to access catch-up TV. At a one-off cost of £189, it’s already looking like a good deal.

Digital TV receivers aren’t known for their breathtaking looks, but Humax has turned the HDR-1100S into a full-on fashion accessory. The unit boasts curvy white bodywork with a silver strip tracing the perimeter, making it the funkiest Freesat box around. It’s also available in black if you prefer something more conventional.

Size-wise it’s nice and compact, measuring a manageable 280mm wide by 48mm high, while build quality is generally good despite the plasticky top cover. The casing is firmly screwed together and has a reassuring heft.

Clutter is kept to a minimum, with a few subtle logos and stylised silver buttons on top for volume, channel up/down and standby. There’s no text display panel – the only sign that it’s switched on is a subtle blue light glowing underneath.

On the rear of the unit you’ll find a generous array of sockets that goes beyond the basics. Naturally, there’s an HDMI output that pipes those glorious hi-definition pictures to your TV – upscaled to 1080p if need be – ably supported by two LNB inputs, composite, analogue stereo output and optical digital output.

You can connect to the internet using either the Ethernet port or built-in Wi-Fi, and there’s a USB port for media playback.

The HDR-1100S is equipped with two tuners, allowing you to record two channels at once. You can even watch a third channel while two others are recording, although the choice of available “third” channels depends on which two channels are being recorded. 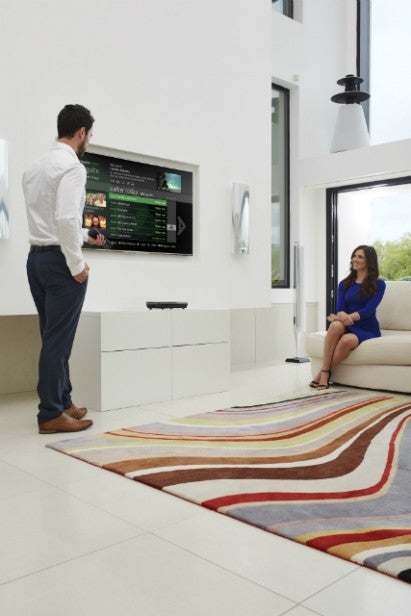 There’s a 500GB hard disk on board, but if you need more space then 1TB and 2TB versions are also available for £219 and £299 respectively. The 500GB version allows you to record up to 125 hours of high-definition programmes or 250 hours of SD. You can also pause and rewind live TV, while a 30-minute buffer memory lets you record a programme that’s already started.

The HDR-1100S offers a range of catch-up TV services, including BBC iPlayer, ITV Player, All 4 and Demand 5. You can access programmes from these services using the special Roll Back TV Guide (more on this later), or through the individual apps. Other apps include Hopster, Curzon Home Cinema, BBC News, BBC Sport and YouTube.

Unusually, the HDR-1100S also lets you stream music, videos and photos from networked PCs and NAS drives. And if you’re not into wireless streaming, you can play files from USB storage devices.

The Humax boasts wide format support via DLNA and USB – I was able to play MKV, AVCHD, DivX, XviD, WMV HD and AVI videos, plus MP3, WMA and AAC audio. FLAC and ALAC are off the menu, however.

As is the norm for Humax TV receivers, setup is blissfully simple. The HDR-1100S runs through every aspect of the procedure on the initial boot-up, including aspect ratio, postcode-specific channel tuning and Wi-Fi connection. Most Freesat receivers do this, but the clarity and friendliness of Humax’s menus is impressive.

Once installed, the HDR-1100S’s slick menu system continues to make things easy. Humax takes a cool contemporary approach to onscreen design, without compromising usability. The menus are peppered with eye-catching thumbnails and jazzy colour schemes, which will be music to the ears of inexperienced users. 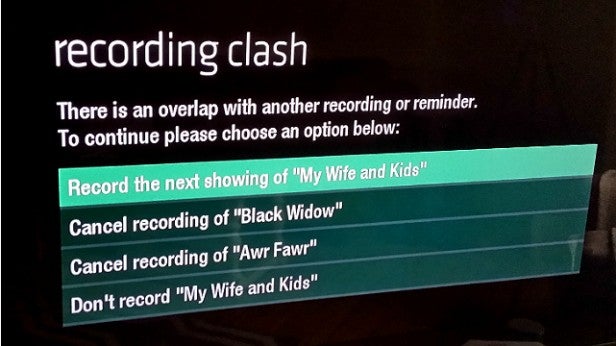 As ever, it’s the little things that matter, such as the helpful onscreen messages that pop up to help resolve recording clashes (above), record an entire series or switch to the HD version of a programme.

Most functions are carried out with impressive speed and smoothness – in fact, the only negative during my time with the Humax was that it’s slightly slow to change channel when using the P+/- keys. When that’s the only bad thing to report, you know you’re onto a winner.

Humax partners the box with a textbook remote. Its long, slender shape and gloss-white finish are easy on the eye and the thoughtful button layout makes navigation intuitive. The buttons are large and clearly labelled, with dedicated keys for all the important menus. Top work. 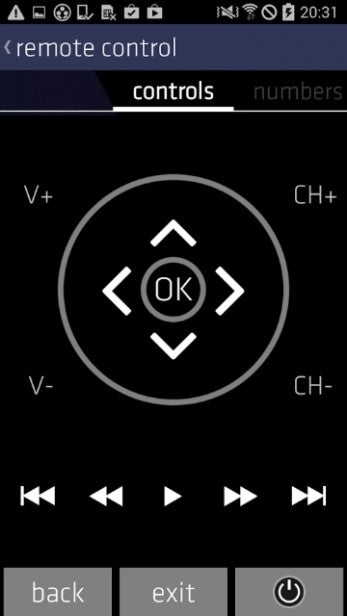 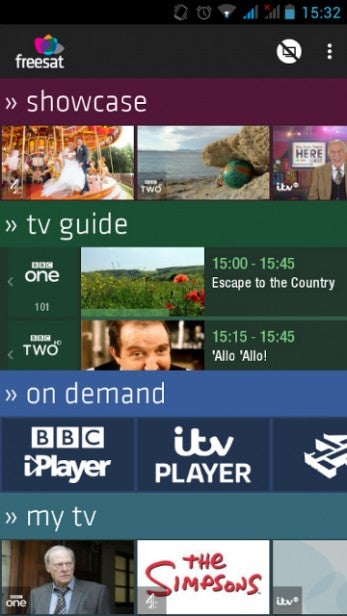 Download the Freesat app onto your Android or iOS smartphone, and you can use it to control the HDR-1100S, and even to set recordings while you’re out and about.

You can access practically all of the box’s features through the app, including the EPG, Showcase and Search, as well as launching on-demand programmes and recordings. However, you can’t watch recordings on your phone. 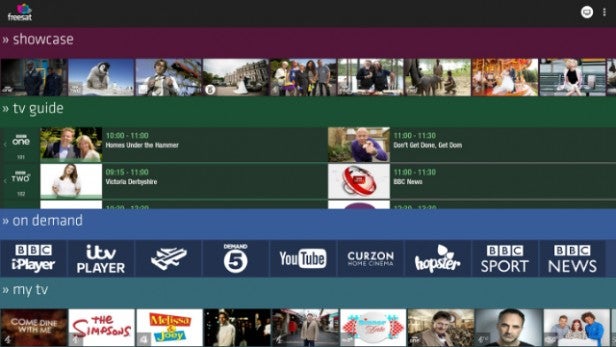 The design mimics that of the onscreen menus and is every bit as attractive, but it crashed a couple of times on my Galaxy Note 3.

Hit the Home button and the live TV screen shrinks down to two-thirds its normal size, with a three-channel now-and-next grid below it and a list of options to the left. 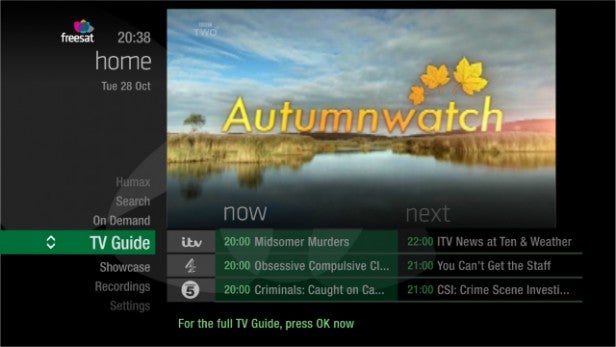 Among these options is Showcase, a Freesat-curated selection of programmes – both on-demand and broadcast – that might be of interest. You can filter the selections by genre and schedule shows to record simply by pressing OK. 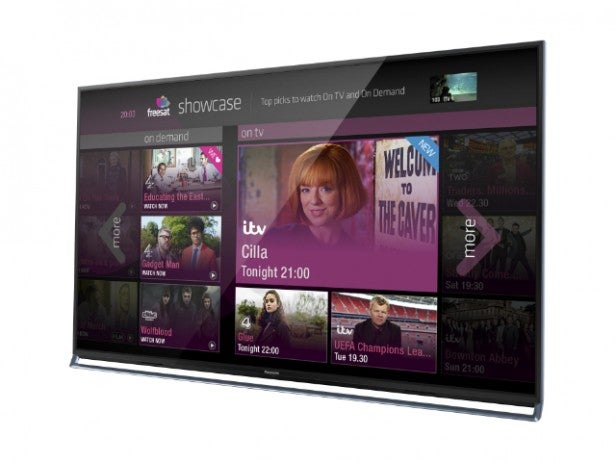 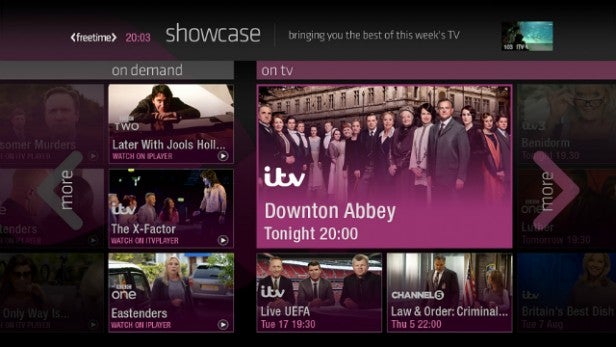 There’s also a Search feature, which lets you find programmes by keyword and a dedicated On Demand section that houses all the catch-up TV apps. A separate TV Portal area offers apps such as Flickr, Picasa, Daily Express and the pièce de résistance – Bible TV.

Recordings are presented in a simple list showing the channel logo, title, date and time. It also displays how many episodes are recorded if the programme is series-linked. A menu on the left filters recordings to help you find what you want, such as “Most Recent” and “Still to Watch”. It couldn’t be easier.

Exploring video, music and photos on USB and DLNA devices is similarly straightforward – folders and content are organised into neat lists, and it displays available cover art when playing a track.

Of course, the star attraction is the Roll Back EPG. It cleverly incorporates catch-up TV into the traditional programme guide layout. While it may seem chaotic at first, Humax’s intuitive layout means you’ll soon get the hang of it. 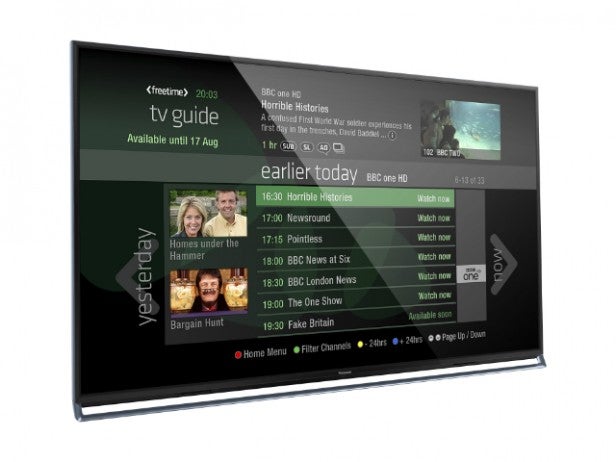 When you first enter the EPG, you’ll see a now-and-next screen showing seven channels at a time. Move the cursor right towards the “Later” icon and you can explore upcoming shows over the next seven days using the familiar programme grid layout. 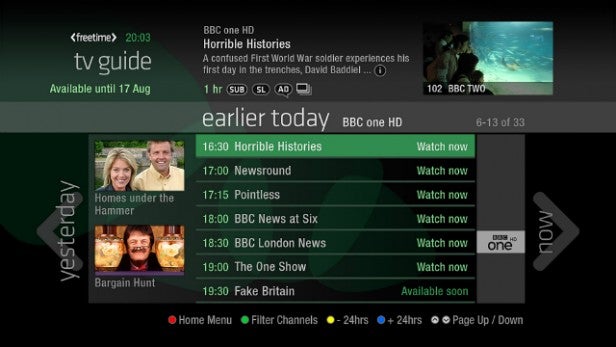 Highlight the “Earlier” icon and the Humax displays a list of catch-up content from the previous day. Keep moving left and it’ll show you content for each of the past seven days. A menu on the right lets you switch to a different channel – but when you do so, it annoyingly jumps back to the present day.

To watch a programme, just select it from the list and choose the “Watch Now” option. You can’t record it on the hard drive as you can on Sky, however.

Nevertheless, this superb EPG is packed with information and shortcuts, including the ability to filter the channels by type or isolate the HD channels. Live TV plays in a box as you browse, and it displays the synopsis without having to press the “i” button.

If you don’t have time to explore the full EPG, you can quickly check programme details using the onscreen banner. Press the “i” button and the now-and-next banner appears at the bottom of the screen, showing the current channel and two adjacent ones. Use the direction buttons to browse the schedules up to a week in advance.

In terms of picture performance, the HDR-1100S doesn’t put a foot wrong. High-definition channels look resplendent, with outstanding levels of detail and rich, solid colours. Channel 4 HD looks arguably the best, whether you’re watching daytime guff such as Posh Pawnbrokers or glossy prime-time dramas such as This Is England ’90. 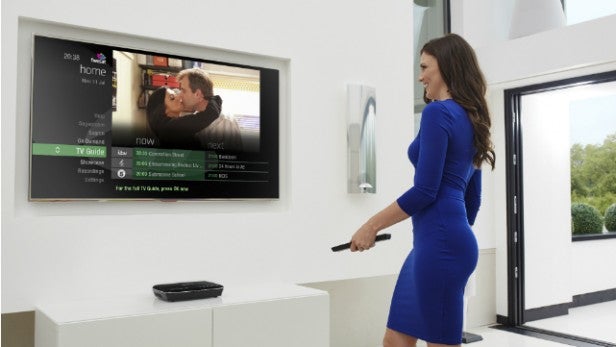 With the latter, the Humax faithfully captures all the gritty urban detail and garish 90s fashions. Well-tuned contrast makes the images look deep and punchy, with minimal noise and fluid movement. Switch to brightly-lit studio fare such as This Morning or  and their vibrant colours blaze from the screen.

The good news is that picture quality remains exactly the same when recorded onto the hard disk. Streamed HD from services such as BBC iPlayer and All 4 looks remarkably good too. 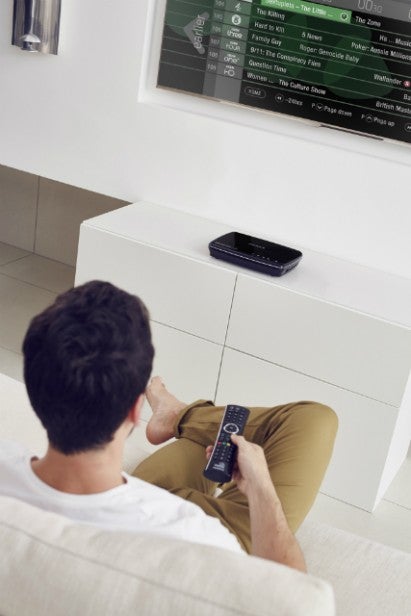 If you want an easy path to subscription-free satellite TV then the HDR-1100S is an absolute no-brainer. It’s a doddle to set up and navigate thanks to Humax’s expertly crafted menu system, which affords a high level of flexibility whether you’re recording TV or enjoying catch-up content. The intuitive Roll Back TV Guide delivers a seamless blend of broadcast and on-demand programming.

Even more impressively, the Humax goes beyond what you’d expect from a Freesat receiver. The addition of built-in Wi-Fi is a godsend, while DLNA streaming, internet apps and USB media playback push the HDR-1100S into must-buy territory.

A glitchy Freesat app and slow channel changing are the flies in the ointment, but overall the HDR-1100S is a fabulous Freesat receiver.

With its user-friendly operating system, generous features and seamless Roll Back EPG, the HDR-1100S is Humax’s finest Freesat receiver to date.