The HB-1100S is a high-definition Freesat box with a ‘roll-back’ TV guide that makes it easy to watch programmes on demand over Wi-Fi. As well as watching more than 200 free satellite TV channels, you can access catch-up TV players such as BBC iPlayer, ITV Hub, All 4 and My5 – or watch dancing cat videos on YouTube.

It’s a great way of adding free high-definition channels and smart functionality to an older TV, perhaps in a second room. There’s no hard disk drive on board, but you can connect an external hard drive to the USB port and record TV programmes or pause and rewind live TV. Throw in network media playback and a Freesat phone app, and the HB-1100S looks like a very decent proposition for the money. 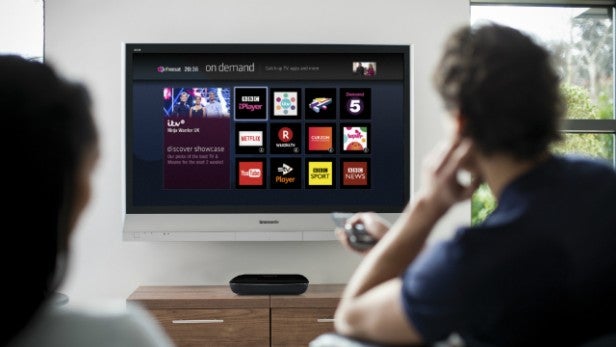 TV receivers aren’t the most glamorous of products to talk about, but Humax’s HB-1100S is an attractive bit of kit with its curvy gloss-black casing and silver trim. This sleek, compact design is a huge improvement on its predecessor, the HB-1000S, which used a larger, more conventional set-top box design. The bodywork feels a little plasticky, but it’s solidly assembled. 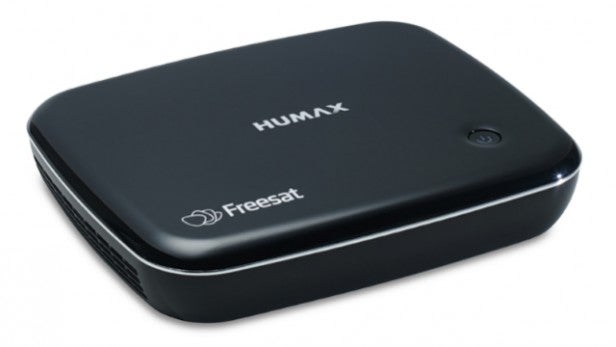 The compact design doesn’t leave room for a display panel. Instead, you get a single LED on the front that tells you when it’s awake. There’s a power button on top, but that’s your lot. On the rear you’ll find a healthy array of sockets, including an HDMI 1.4, composite video, optical and analogue RCA outputs, a single LNB input, plus Ethernet and USB 2.0 ports. As well as external HDD recording, the USB ports also lets you play music and video files from storage devices. 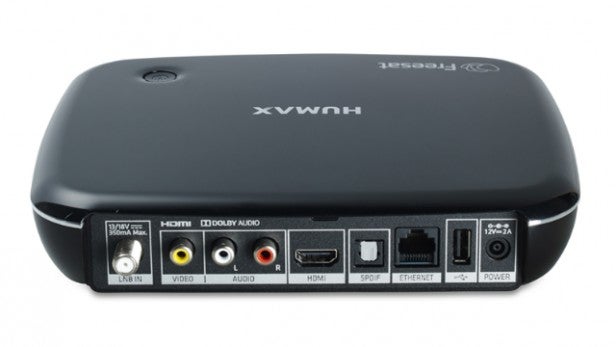 The key feature here is the roll-back EPG, which allows you to browse up to eight days ahead or look back at seven days worth of catch-up TV content. It also offers programme recommendations in the Showcase section, as well as access to all the main catch-up TV apps (BBC iPlayer, ITV Hub, All 4 and My5). 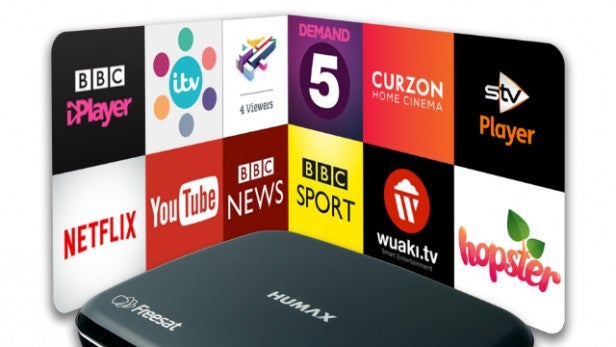 They’re joined by YouTube, STV Player, BBC Sport and BBC News apps, plus a selection of subscription services such as Netflix, Wuaki.tv, Curzon and Hopster.

All of these features require an internet connection. Unlike the HB-1000S, which required a dongle, the HB-1100S has Wi-Fi built in (802.11n), making it much easier to access the above services. If your Wi-Fi coverage is ropey, the Ethernet port provides a wired connection to a router or homeplug.

The HB-1100S is also compatible with the Freesat App (more on that later) and the Humax Eye home monitoring camera, which allows you to watch live or recorded footage on your TV. 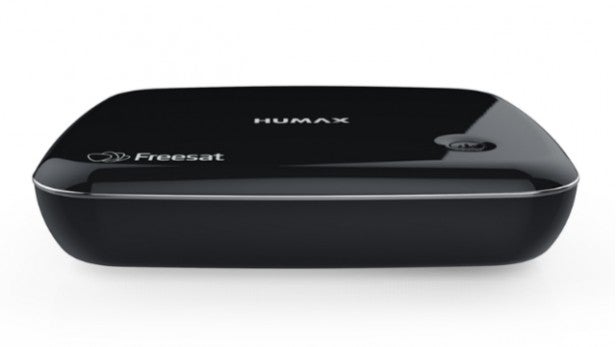 If you already have a working satellite dish installed, just screw the cable to the rear LNB terminal and away you go. On first boot-up, the Humax runs through a series of setup screens, starting with the TV settings and signal strength. It then performs a channel search based on your postcode and sets up the Wi-Fi. It’s over in a flash. 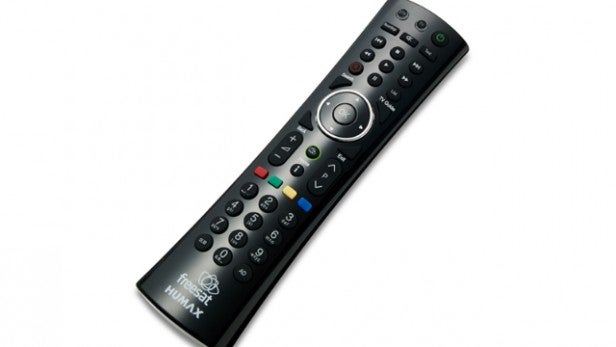 The long, curvy Humax remote is identical to previous versions and looks good in its gloss-black finish. It’s covered in buttons from top to toe, but the crucial menu controls are positioned for easy thumb access. It’s clearly labelled, well organised and pleasing to use, with each button giving a definitive click. It will suit beginners down to the ground. 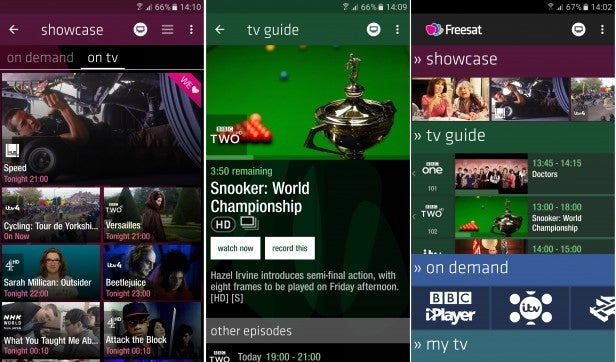 Those of a more tech-savvy bent can control the HB-1100S using the Freesat app on their phone. You can browse the EPG, launch catch-up TV apps, check out Showcase recommendations, or peruse recordings on a connected USB drive. It’s slick, attractive and works brilliantly, making great use of programme stills and channel logos. Particularly nifty is the ability to look up a programme in the EPG and start watching it at the tap of a button. 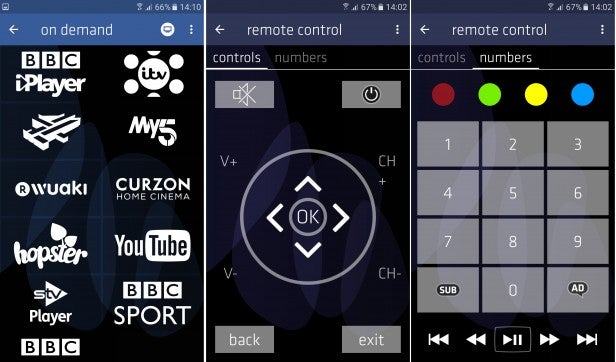 If you’re not familiar with Humax’s roll-back EPG, it may seem a little bewildering at first; but stick with it – the clever layout and fast operation make it easy to find the shows you want.

The first thing you’ll see is the Now and Next page, which lists programmes currently being broadcast, seven channels at a time. Scroll to the left and you’ll enter the roll-back section of the EPG, which displays a chronological list of all catch-up programmes, channel-by-channel (you can change the channel using the column on the right). 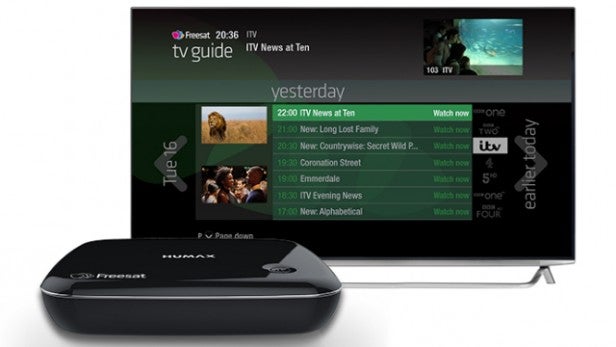 Keep moving the cursor left and it travels back through the past seven days. When you find the show you want, hit Watch Now and it starts playing. Recommended programmes pop up on each page to help you find something good to watch.

Scroll in the opposite direction, however, and you’ll enter the normal EPG section where you can browse shows over the next eight days. Programmes are arranged in a grid, which remains uncluttered and easy to follow, despite packing in lots of information.

The EPG presentation is superb, with a tasteful colour scheme and easy-to-read fonts. The lists populate quickly and the cursor moves across the page without hesitation. Live TV plays in a mini-screen at the top as you browse, while a range of shortcuts at the bottom help you move round the grid more quickly. 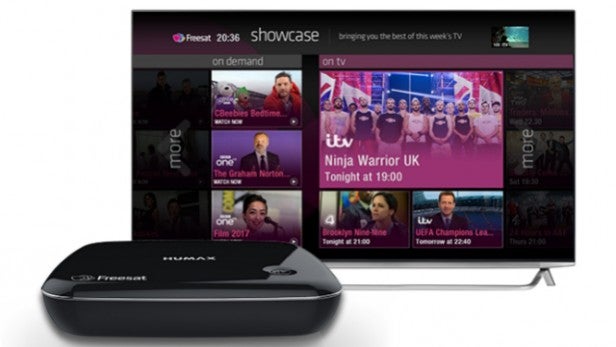 The rest of the on-screen menus are equally attractive. Every page is designed for maximum simplicity, but with an overriding sense of sophistication. This is a first-class user experience. 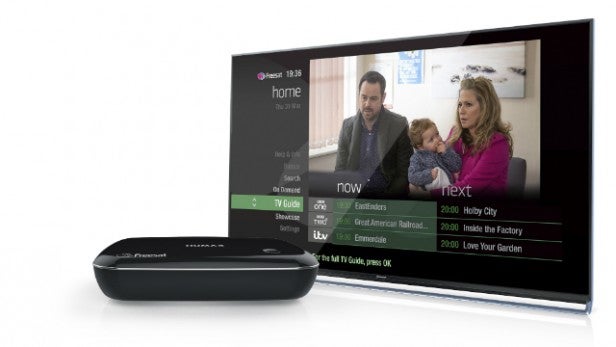 The HB-1100S is a surprisingly slick network streamer, too. Using a clear menu structure, it navigates through packed NAS drives quickly and starts playing tracks instantly. The Now Playing screen displays all the relevant metadata, artwork and playback options without looking cluttered.

Flicking through the wide range of Freesat channels, the Humax delivers excellent picture quality. Naturally, attention is drawn to the hi-def channels and their rich, blemish-free colours and crisp detail.

Free-to-air high definition TV has been around for a while now, but hasn’t lost its power to dazzle – particularly when you watch sumptuous BBC dramas such as Versailles or The Last Kingdom. The sets, scenery and costumes are bursting with texture, while the colour palette looks natural and blacks are lustrous. 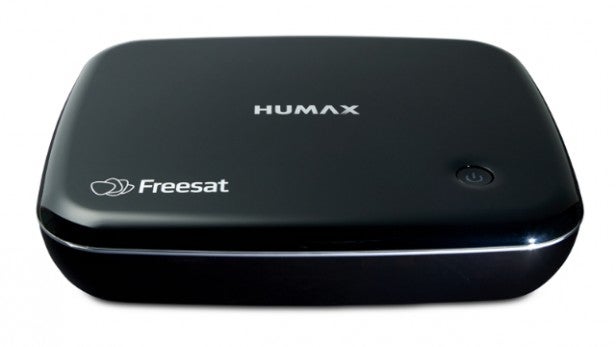 Objects move fluidly without motion blur, and there’s no evidence of mosquito noise or blocking. Colours blend smoothly and edges are well defined.

With the HDMI output set to 1080p, upscaled SD channels also look surprisingly good. Yes, there’s a drop in detail and an increase in block noise, particularly with a lot of small, fast-moving objects on the screen (confetti at a football match caused some shimmering). However, this is common to most digital TV receivers; on the whole picture quality is solid, no matter which channel you’re watching. 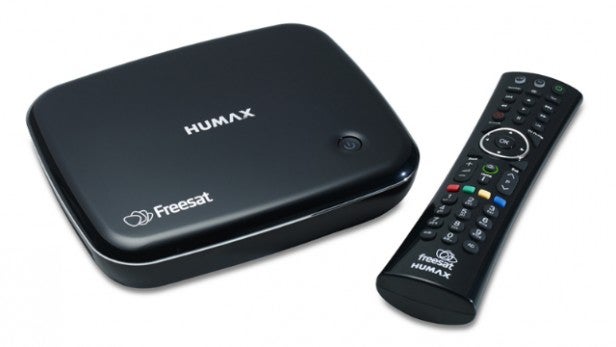 Sound-wise, the Humax is loud and dynamic enough to be heard over the hubbub of my living room. The box has its own volume controls independent of the TV, so I pushed it to 100 and used my TV remote to control the loudness.

As a video streamer the HB-1100S generally works well, particularly with NAS drive content, but watching BBC iPlayer proved frustrating. The stream frequently jumped back a few seconds during playback; at other times it would freeze completely and show an error message. Of course, there could be external factors at play, but since my other resident TV receivers have no such problems, it does raise a few questions. Other apps such as All 4 and ITV Hub didn’t suffer the same problem. 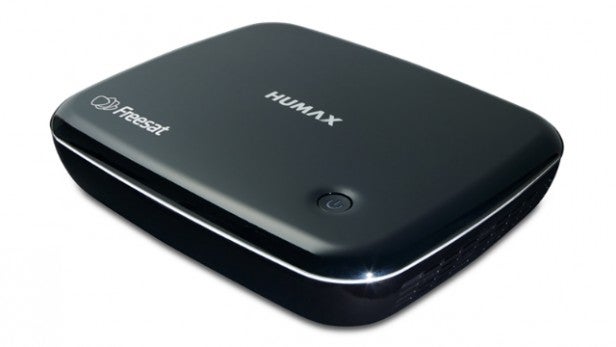 If you’ve decided that Freesat is the platform for you, and you don’t need PVR-style functionality, then the HB-1100S is a superb choice. Not only does it do the basics very well indeed, it also goes above and beyond the call of duty with plenty of nifty features that enhance the user experience.

From the clever roll-back EPG to network streaming and on-demand apps, there’s plenty here to keep you entertained beyond the broadcast schedules. It’s easy to install, a breeze to operate and delivers crisp, radiant pictures to your TV. It even looks nice.

Only glitchy BBC iPlayer streaming rained on the parade – in all other respects, the HB-1100S is a slam-dunk.

A slick, stylish and feature-packed Freesat receiver that justifies every penny of its price.