The FVP-4000T is the first Humax PVR equipped with Freeview Play, a new connected service that combines live broadcasts and catch-up TV in a single electronic programme guide. You can access catch-up content from BBC iPlayer, ITV Player, All 4 and Demand 5 simply by scrolling back through the EPG.
It boasts a 500GB hard disk to store recordings (a 1TB version is also available) and built-in Wi-Fi to make network connection a cinch. First impressions of Freeview Play were positive in my review of Panasonic’s flawed DMR-PWT550 Blu-ray player/PVR combi, but I’m hoping Humax’s impressive-looking PVR can unlock its full potential.

Humax has gone to town on the FVP-4000T’s adventurous design, offering two rather middle-class-sounding colour schemes – Cappuccino and Mocha. Cappuccino features a gorgeous brown faux-leather top panel with a gold trim and white base, while Mocha sports a dark-brown top, silver band and black base. Both are enhanced by curvy side panels and attractive stitching around the top panel, making them remarkably stylish by PVR standards.

The FVP-4000T is compactly sized and robustly built. A row of buttons on the top panel allows you to change channels or control the box’s built-in volume, while an LED in a small window on the front reveals the unit’s status.
On the rear is a generous set of connections, including HDMI, optical, analogue RCA and composite video outputs, an Ethernet port and RF input/output. There are two USB ports – one on the side and one on the rear – which allow you to play music, video and photo files from flash drives.

Freeview Play is the star attraction here – more on that later – but there’s plenty more besides. The built-in Wi-Fi connection allows you to access a wide range of online apps in the “On Demand” menu, including YouTube, Dailymotion, BBC News and BBC Sport, with Netflix likely to be added in early 2016.
You can also stream music, video and photo files from DLNA devices on the same network, or play them from USB flash drives. Supported formats include MP3, WMA, WAV, AAC, WMV, AVCHD, MP4, AVI, MOV, DivX and MKV, but I was unable to play MKV, FLAC and ALAC.
The FVP-4000T’s 500GB hard disk lets you store up to 300 hours of recordings – 600 hours on the 1TB version – and with three Freeview HD tuners on board, you can record four channels simultaneously while watching a fifth. This represents an unprecedented level of flexibility on a Freeview PVR. 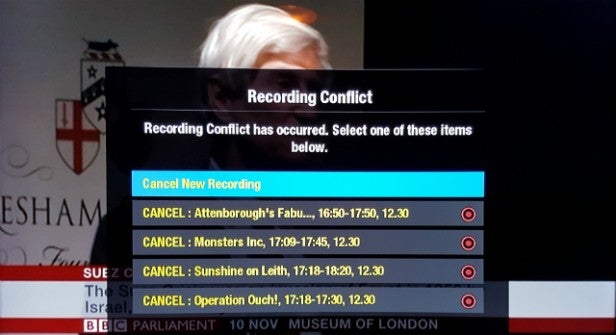 Of course, the hard disk also lets you pause and rewind live TV, while onscreen messages alert you to recording clashes – but with three tuners on board, you probably won’t see those very often.

With its simple, uncluttered layout, eye-catching thumbnails and magnified text, the FVP-4000T’s EPG has clearly been designed with technophobes in mind. It works beautifully, but lacks the clear-cut organisation of Panasonic’s EPG.
Hit the Guide button and the first thing you’ll see is a Now and Next programme grid showing five channels at a time. Each row displays the current broadcast, with a column on the right showing the programme up next. Channels are clearly labelled with familiar icons and thumbnails for the current programme (if available).
You can move up and down the channel list using the up/down keys or jump a page using the CH keys, while a long press on the left or right keys lets you jump straight to a specific day. Channels can also be filtered by genre.

Scroll left and you’ll enter the catch-up TV part of the EPG, which sticks with the same five-channel format as the rest of the EPG. Any programmes available to stream contain a “play” icon – to view it, simply hit OK and press the “Watch Now” button.
It’s simple to navigate, particularly once you’ve lived with it for a few days, but I prefer the layout of Panasonic’s EPG, which arranges catch-up content into neat columns for each day. Humax’s layout is less ordered, and as a result it can be a little confusing when you’re trying to find a particular programme.
Scroll to the right and you can start browsing the schedule for the next seven days. When you move to a new day, the relevant date helpfully flashes up on-screen. Select a programme using the OK button and you’ll see a synopsis plus a few options – Record Whole Series, Record This Programme or Set Reminder. Cleverly, if a repeat is due to be shown, the Humax gives you option to stream it via catch-up TV rather than wait for it to be shown live.

The rest of the Humax’s on-screen menus are superb. The Home Menu is superimposed over live TV and features a row of large icons across the bottom of the screen. There are five options – On Demand, TV Guide, Recordings, Media Centre and Settings.
The On Demand menu contains the full range of catch-up TV portals and apps, all of which are displayed as large tiles, making it easy to find the content you want. The lower half of the screen houses a selection of lesser-known services, including games, puzzles and lifestyle apps.
The Media Centre is your starting point for exploring DLNA servers. Folders follow a logical sequence and the layout retains the large thumbnails and jazzy colour schemes of the other menus.
The Recordings menu is designed with similar simplicity. You can choose to view by channel, day or location, and in each case programmes are accompanied by a large thumbnail. The Schedule tab displays any recordings you’ve programmed. 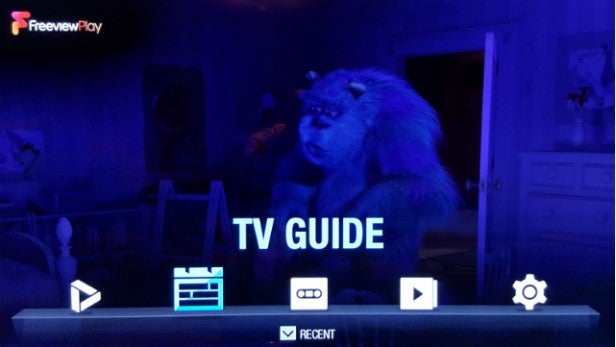 If you don’t want to delve into the full Freeview Play EPG then you can hold down the direction pad keys and access the on-screen banner, which gives you an overview of what’s on for the rest of the day. The banner scrolls across the middle of the screen and uses large thumbnails to illustrate programmes. It’s a nice touch and indicative of the FVP-4000T’s sophisticated yet flexible approach.
The thoughtfully designed remote makes operation as intuitive as possible. It sports big rubber buttons and bold lettering, with the most-used keys placed exactly where your thumb expects them to be. The direction pad and surrounding keys are particularly well organised, while the Home and On Demand keys are coloured blue to stand out. And with its brush-effect bottom-end it willl look nice on the coffee table too.
If you can’t be separated from your smartphone then Humax has launched a couple of apps for that too. The first is a remote app that lets you control the FVP-4000T; the other streams live and recorded programmes from the box, allowing you to watch TV around the house or away from home.
The remote app works well, passing commands instantly over the Wi-Fi connection. It uses a basic but effective layout that closely replicates the physical handset.

As for the Live TV app, I was able to access hard-disk recordings easily but there’s a fairly long wait before they start playing. The channel list and Record menus are carefully optimised for the smartphone screen, with a logical and uncluttered layout – the latter even displays thumbnails for each recording. The app is simpler and more co-operative than I expected but is best used in small doses.

After living with the FVP-4000T for a few days, I found it to be a slick and obliging PVR. The triple tuner arrangement reduced my recording clash count to zero and the Freeview Play EPG made life easy when looking for programmes I’d missed.
Picture quality is uniformly excellent. The box is at its best with high-definition fare such as Fargo on Channel 4HD. The cinematic visuals and bleak colour palette are beautifully handled, plus there’s tons of detail bursting from the screen – skin textures are clearly rendered and the 1970s-style clothing looks sharp and vivid.
Record programmes onto the hard disk and any drop in quality is imperceptible. You get the same crisp detail and vibrant colours, plus there’s no pixel shimmering or break up during fast-moving football matches and movies.
That goes for standard-definition recordings too, although obviously the source broadcasts aren’t up to the same standard. Shows such as The Big Bang Theory on E4 look soft and fuzzy, plus the hues of Sheldon’s shirts are a little too warm, but it won’t affect your enjoyment in any way.
The quality of shows streamed via Freeview Play is excellent, an improvement on the gauzy images offered by the Panasonic DMR-PWT550. Some artefacts are visible, but they’re not as pronounced. Football matches and brightly-lit studio shows such as Only Connect look solid and stable, with strong colours and a surprising degree of subtlety.

Overall the FVP-4000T is a top-drawer PVR that offers excellent value for money at under £200. Its seamless integration of the new Freeview Play service makes it easy to stream programmes from the last seven days without having to trawl through individual catch-up services. The on-screen menus are attractive and intuitive, while the presence of three tuners brings an unprecedented level of Freeview recording flexibility.
Still need convincing? The classy Cappuccino styling makes this one of the most attractive PVRs on the market, plus its wealth of networking features – DLNA file streaming, online content and smartphone apps – make it much more than a mere PVR.
Grievances are minor – the Freeview Play EPG doesn’t organise catch-up TV as well as Panasonic’s DMR-PWT550, and streaming TV through the phone app can be a chore. However, given the mountain of positives elsewhere it seems churlish to complain.

Not only is Humax’s first Freeview Play PVR a joy to use, but it’s also packed with handy features, looks gorgeous and delivers the goods visually – only an untidy catch-up EPG rains on the parade.