Although we were highly impressed by Humax’s Foxsat-HD Freesat receiver when it launched last year, we felt that a vital part of the puzzle was missing, namely the ability to record programmes. The only way of doing it is to hook the box up to a DVD recorder or VCR, which feels somewhat antiquated in the days of Sky+. But now the company has launched this PVR version which makes it a lot more convenient to record your favourite programmes and could pose a serious threat to Sky’s dominance of the digital PVR market.


Unless you’ve been living on Mars for the last year, you’ll know that Freesat is a subscription-free service that provides the ideal solution for people who can’t get Freeview or don’t want to pay Sky’s monthly fees. You get a wide range of free-to-air TV and radio channels, as well as high-definition channels from the BBC and ITV.


The Foxsat-HDR features a 320GB hard-disk, which dwarfs the 160GB hard-disk inside the Sky+ HD box and allows you to record up to 80 hours of hi-def programmes or 200 hours of standard-definition programmes. It also boasts twin satellite tuners, enabling you to record one channel while watching another or record two channels while watching a third.

In addition to the impressive hard-disk capacity the unit also supports Freesat+, which like Freeview+ is a group of features that makes it really easy to record programmes using data from the respective broadcasters. They include Series and Split Recording; Accurate Recording, which tracks the start and end times of programmes and adjusts the recording schedule accordingly; Schedule Tracking, which records the programme if it moves to a different day or time, and Alternate Instances, which searches the EPG to find another broadcast if the recording schedule overlaps.


The unit constantly records up to two hours of TV into a buffer memory, which allows you to pause and rewind live TV, but sadly you can’t retrospectively record programmes from the buffer. You can also start watching a programme before it has finished recording, or ‘chase play’ in marketing speak.


Humax has put a lot of effort into the unit’s design, resulting in a stylish, robustly-built machine. It’s a lot slimmer and shallower than the Sky+ HD box, and the blue-tinged reflective fascia injects a touch of glamour into its otherwise modest black finish. There’s a backlit display panel bang in the centre, which clearly shows the name of the current channel and other information like the output resolution.

The entire front panel drops down to reveal a bank of regularly used buttons, a common interface smartcard slot and a USB port, which enables you to move MP3 and JPEG files between a pen drive/external HDD and the unit’s hard-disk, turning it into a multimedia hub. But even more impressive is that you can archive TV recordings on an external hard-disk.

On the back are two LNB inputs, supplying the signals for the twin satellite tuners, plus an LNB output. If you don’t have two separate feeds you can loop the signal through to the second input, but this only allows you to record one channel and view a second. Elsewhere the rear panel boasts a generous range of connections, including an HDMI socket that supports 576i/p, 720p and 1080i output, two SCART outputs (one of which outputs RGB, S-video and composite, the other S-video and composite), composite and stereo audio output. You’ll also find an optical digital output that delivers Dolby Digital sound from broadcasts that support it, an Ethernet port for future IPTV applications (such as BBC iPlayer) and a second USB port that performs the same functions as the one on the front. 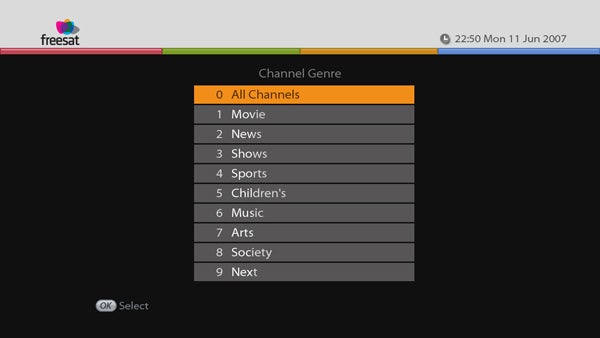 Setting up the Humax couldn’t be simpler. When you first boot it up (which takes a surprisingly long time) you’re guided through an installation wizard that sets the basics and then proceeds to check for connected dishes. After you’ve entered your postcode in order to get the correct regional variations, it tunes the 106 TV and 35 radio channels in ultra-quick time and confirms all your settings in a handy Result screen.


And once you’re up and running, the unit is an absolute joy to use. Every single aspect of the operating system oozes sophistication and user-friendliness – the jazzy, vibrant menus put Sky+ to shame, using colourful, hi-res graphics and a straightforward structure, while in terms of responsiveness it’s one of the slickest digital TV receivers we’ve ever encountered. What’s particularly helpful is the way every menu screen is accompanied by a legend at the bottom showing what buttons you need to press. 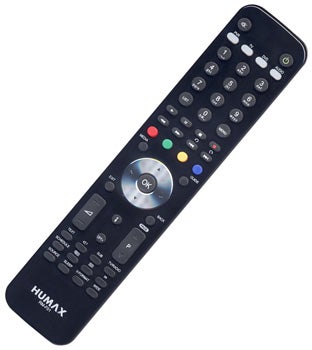 It’s complemented by a terrific remote that’s clearly been designed with simplicity in mind. The buttons are large, well spaced and plainly labelled, plus the gloss black finish and silver menu controls give it a dash of elegance to boot.


The interface is packed with smart touches, such as the magnificent i-Plate display that displays every conceivable piece of information about the current programme, and the Play Bar, a timeline that shows you where you are in relation to live TV during timeshifted playback. Also impressive is the amount of flexibility when navigating the channel list, which can be narrowed down to favourites, HD channels or individual genres.

The EPG is also superb, using an instantly accessible grid layout and excellent use of the remote keys to skip forward in time or switch to a List view. When you set something to record, it asks if you want to record the whole series or the single event, and if a programme is being simulcast in HD it asks which version you want to record.


Finding recordings is easy thanks to the Media List’s terrific layout – it’s broken down into video, radio, music and photo and from here you can setup playlists or copy content to a USB device. 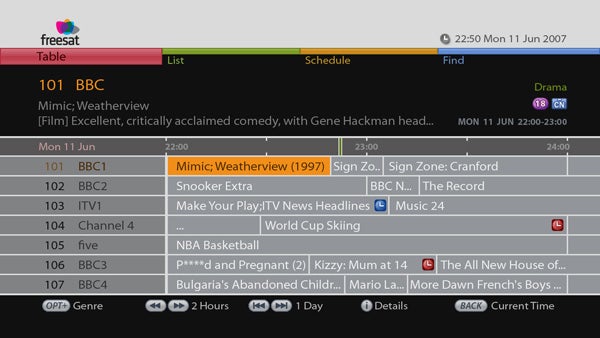 There are a few other helpful features on board, such as lightning-quick digital text, SD channel upscaling, audio description support, auto padding and Instant Replay, but unlike the Foxsat-HD there’s no non-Freesat mode, which means you can’t access the hundreds of other free-to-air satellite channels out there.


In operation the Humax is a real trouper, delivering consistently clean, solid picture and sound quality, and playing back video with pleasing smoothness and stability. Many people will also be concerned about fan noise, but we’re happy to say that the unit runs as quiet as a mouse.

The quality of standard-definition pictures on this box compares very well with those of Sky and Freeview, but as with any digital TV platform the quality varies wildly depending on the broadcast quality – ITV channels, for example, look awful but the BBC’s roster looks a lot sharper and cleaner.


HD material looks fantastic too. BBC HD’s mixture of costume dramas, wildlife shows and sitcoms are delivered with the sort of mesmerising sharpness that we’ve come to expect from this channel, and there’s no doubt that hi-def makes the Foxsat-HDR a much more compelling proposition than any Freeview box – although the limited HD content is still one of the main downsides of the Freesat platform.


If you can get over Freesat’s limited hi-def content and the lack of support for non-Freesat channels, the Foxsat-HDR makes a fantastic digital TV proposition. There’s a capacious hard-disk on board, its faultless operating system makes it easy to use and picture quality is as good as it gets. It’s also stylish, operates with no fan noise and is packed with more features than you’d expect for the money. In fact, the Humax is so good it might even tempt Sky customers to make the switch just for the hell of it.