The Humax DTR-T1000 is the first YouView PVR

It’s the first time that Freeview and online portals have been integrated in this way, bringing all available content together into one easy-to-understand interface, which makes things much simpler for newcomers to the whole TV streaming phenomenon. Sky and Virgin Media offer a similar mixture of live and on-demand content but you’re tied into pricey contracts and subscriptions – YouView is yours for a one-off fee. Similarly the latest smart TVs and PVRs offer online access alongside the regular Freeview channels, but not as part of a single integrated service.

Away from online access, the DTR-T1000 is a competent PVR with twin tuners and a 500GB hard-disk drive that can store up to 300 hours of SD-quality programmes or 125 hours of HD content. So if all you want to do is watch and record Freeview channels without the added complication of online content, then you can.

Design
The box itself is immensely attractive, clad in a sleek gloss black finish and packed into a compact 380mm-wide casing. The look is classy and minimal, with gently curved edges giving a touch of elegance. On the front is a wide display panel that shows the full name of the current channel in red lettering, but during playback of recordings it switches to the name of the programme and the elapsed time.

In the middle, the blue ring of light surrounding the power button catches the eye, while on the right a row of four buttons for changing channel and volume feature. There’s also a USB port on the front but it can’t be used for media playback from storage devices – it’s for Humax’s LAN dongle as the DTR-T1000 lacks built-in Wi-Fi.

Connections
On the rear panel is a generous selection of sockets that combine the old with the new, ensuring compatibility with older TVs. Alongside HDMI and optical digital audio outputs are Scart, composite and analogue stereo outputs, plus an Ethernet port and a second USB port.

Features
Despite all the great things on the Humax DTR-T1000’s spec sheet, we should first discuss its most glaring omission – Wi-Fi. A supposedly cutting-edge product like this really should have built-in wireless web connectivity given its emphasis on simplicity and convenience. Instead you have to hook up the Ethernet port to a router or homeplug adapter. An optional dongle at least gives you a wireless alternative, but that’s extra cost and hassle some buyers could do without.

Elsewhere, the 500GB hard-disk is a decent capacity, while twin Freeview HD tuners allows you to record two channels simultaneously, or watch a programme from the start while it’s still being recorded. The beauty is that you can even watch a third Freeview channel or stream from online services while two recordings are taking place, showing what a versatile recorder this is.

The Humax brings together content from the main online catch-up TV services – BBC iPlayer, ITV Player, 4OD and Demand 5 – as well as Sky’s Now TV service. YouView’s creators have hinted that they’re in talks with hundreds of other content providers, so there’s plenty more content to come.

Operation
The YouView slogan is ‘Extraordinary Choice, Extraordinary Control, Extraordinarily Simple’, and the third part is certainly true. Every single aspect of the DTR-T1000 is designed to provide maximum ease of use – even down to little things like the attached battery flap on the back of the remote to stop you losing it. You also get LAN and HDMI cables in the box.

Setting up the Humax is easy enough, although rigging up mains HomePlugs and LAN cables is a mild inconvenience if the Humax is placed nowhere near your router. HDMI simplifies connection to your TV and you can boost sound quality by hooking up the HDMI, digital or analogue outputs to your sound system (the Humax is Dolby Digital Plus and Pulse compatible). 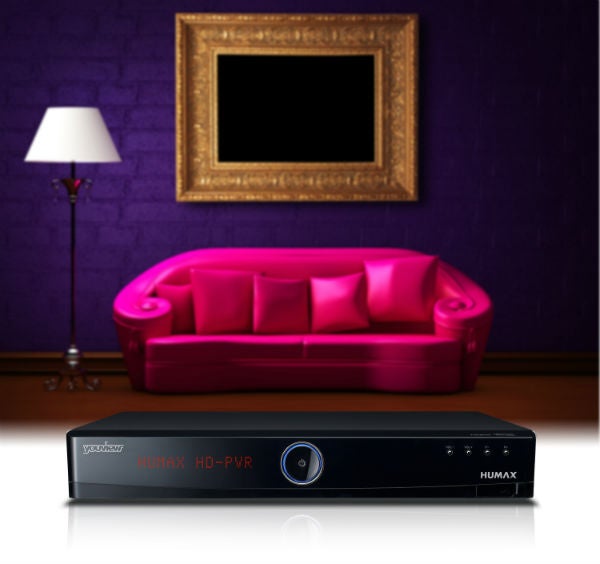 On first boot up the step-by-step wizard uses plain English and clear, engaging displays. It handles all the key settings, including channel tuning and online connection.

The key to the DTR-T1000’s success is its user interface. The classy onscreen design is perfectly pitched at the audience – simple but not patronising. All of the onscreen menus are informative, logical and displayed in a tasteful colour.

At the heart of the DTR-T1000 is its unique EPG. Bring up the guide and you can go back through the last seven days and select any programmes available on the online TV players, as well as zooming up to eight days ahead and setting programmes to record in the usual way. The six channel programme grid is large and uncluttered, with live TV playing in a box at the top, and you can skip days using the remote’s forward/back keys.

Select a ‘past’ programme and the Humax jumps to the relevant online player (if available) and starts streaming. In some cases you have to sit through adverts as you would on your PC but most start playing quickly – 4OD shows even announce that ‘you’re watching 4OD on YouView’. Obviously it’s not a unified viewing experience, as each player has its own look and layout, but that isn’t a big problem given their natural intuitiveness. You can set the Humax to always play the high-definition version of streamed content when available, provided your broadband connection is fast enough (the minimum recommended speed is 3Mbps).

You get all the usual PVR features, like pause/rewind live TV, series and split recording, green button trailer booking and onscreen alerts to avoid clashes.

The Home menu places banners at the top and bottom of the screen, allowing you to carry on watching TV while you navigate. It provides access to the Guide and the setup menu, as well as the MyView section where all recordings are stored.

This menu also provides alternative ways of accessing online content. In its ‘On Demand’ section, you can visit the online players directly, filter content by genre or search for programmes by keyword with predictive text. The Humax brings up thumbnails of all relevant content on catch-up TV portals, with the number of episodes found. It’s one of the slickest and most versatile PVR GUIs we’ve encountered.

There’s an ‘info’ key on the remote that brings up details about the current programme, and although it goes into far more detail about the programme than most PVRs, you can only view details for the programme you’re watching and not any others. 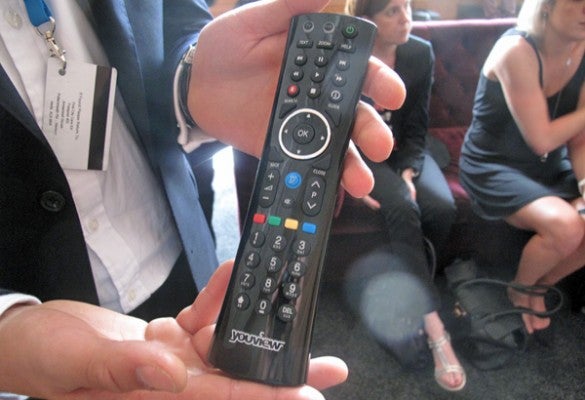 Humax has put a lot of thought into the DTR-T1000’s remote. The inwardly curved sides not only look elegant but make it remarkably ergonomic, while the buttons are large and arranged for maximum convenience – music to the ears of the elderly and technophobes. The gloss black finish makes it surprisingly sexy too.

Performance
In action the DTR-T1000 is a slick and assured performer. In terms of operational speed, it responds instantly to remote commands and zips from menu screen to screen very quickly. This comes as a pleasant surprise in the EPG, where the complex layout and extra days don’t make it any slower to navigate than a regular EPG.

Live high-definition pictures on BBC HD and Channel 4 HD look remarkably crisp and clean, with bold colours and fluid movement. The Humax draws out fine detail beautifully without any pixel noise or shimmering.

Standard definition channels look hazier, with waxier skin tones and an outline of smeary noise surrounding the contestants on BBC One’s Pointless, but that doesn’t stop the pictures being perfectly watchable. In SD or HD these pictures are perfectly preserved on the hard disc with no additional noise.

We’re highly impressed by the quality of streamed content. It differs according to the quality of the broadcast stream and broadband speed, but most of the content we streamed looked smooth and reasonably sharp. It would be almost on a par with broadcast SD Freeview pictures if it wasn’t for the extra noise that flickers gently when characters move around. But considering it’s being beamed over broadband it’s much better than you might expect.

Verdict
YouView gets off to a flying start thanks to Humax’s marvellous DTR-T1000. Mixing broadcast and on-demand content is an irresistible idea in itself, but the success of this PVR lies in the way Humax has combined everything in such a slick and user-friendly way. The online and Freeview sections are seamlessly interwoven within the great-looking EPG, while the rest of the menu system is simple yet sophisticated.

What’s more, the 500GB hard-disk offers ample recording time, and there’s plenty of recording flexibility – particularly the ability to record two channels and watch a third, which is an unexpected bonus.

Our only complaint is that there’s no built-in Wi-Fi, which would have made this even easier to use, but that aside the DTR-T1000 is a wonderful PVR that allows live and streamed TV to live side by side.