Where previously manufacturers were struggling to set a purpose for smartwatches, they’ve seemingly found one in integrating fitness tracking – just look at the Apple Watch Series 2. As such, it isn’t surprising to find fitness at the core of the Huawei Watch 2 range.

Huawei has incorporated a number of features from its other wearable, the Huawei Fit, to bolster the Watch 2’s fitness-tracking credentials. Similar to the Fit, you have access to training plans – such as building up towards a marathon – which you can access daily to determine your training schedule for any given day, whether that be attempting to add some distance to your run or having a recovery day. 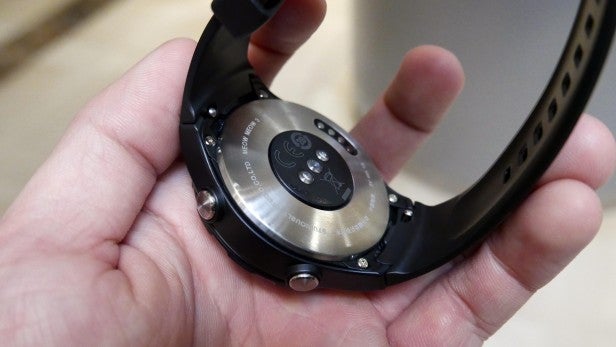 When I first reviewed the Huawei Watch 2, it was a little before its general release. This meant one of the problems I encountered was the Watch 2 not being supported by the Huawei Wear app and the Huawei Health app not being available on the app store. This meant that activity and exercise data wasn’t able to sync to my companion smartphone for better analysis.

Fortunately, this has now been resolved and the Huawei Watch 2 is properly supported by Huawei’s suite of apps and the Health app has made a return. 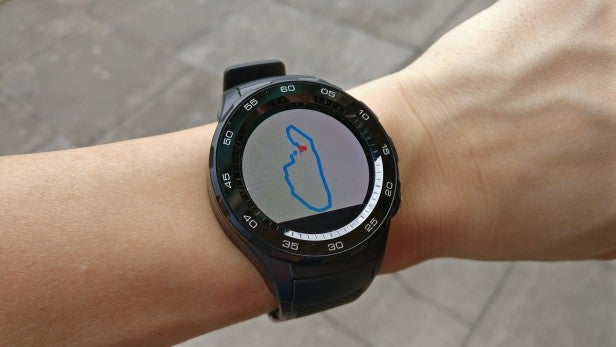 Of course, with standalone apps now available, you’re free to use your own workout app of choice – such as Strava, which has a version available for Android Wear 2.0 devices.

Google Fit itself is also much-improved on Android Wear 2.0, and integrates a degree of rep-counting for activities such as its “Squat Challenge” – which in testing counted reps as expected.

But for the purposes of this review, I continued to use Huawei’s own app. It’s nice and clean and quick to get started, with a number of preset workouts such as running, indoor cycling or walking. Then there are more specific workouts such as Fat-burning and Cardio. 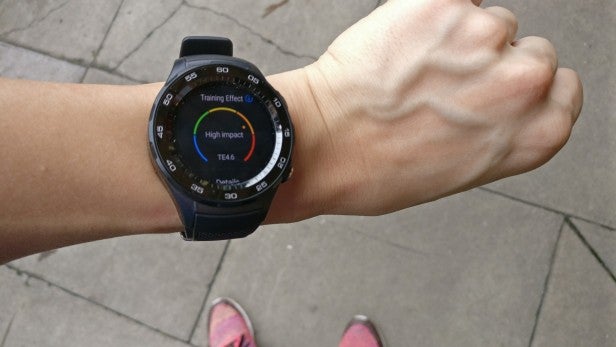 Going for a run, the Huawei Watch 2 achieved a GPS lock very quickly, so there wasn’t that annoying standing around in the cold before I could set off. During the run I wore a Fitbit Charge 2 on my opposite wrist alongside a Jabra Elite Sport in my ears for its heart rate monitoring.

Once you hit start, you get a 3-second countdown before you set off. The display then shows your heart rate, time running and, in prime position on the display, your choice of data metric such as pace, cadence, altitude or steps. Just touch and hold the display to choose what you want at-a-glance access to and the data points can be swapped around.

Your heart rate is clearly shown across the top of the display, against a clear colour wheel to show which heart rate zone you’re currently in – a useful tool if you focus on heart rate zone training.

During my run, I found the heart rate detection was pretty close to the Jabra Elite Sport that was taking readings from my ear. The Huawei Watch 2 would occasionally struggle to keep up when there were rapid changes in heart rate – such as short sprints to overtake pedestrians, or zipping across a traffic intersection – but eventually, the results would level out within around a 3-5BPM range. Not bad for an optical heart rate sensor. 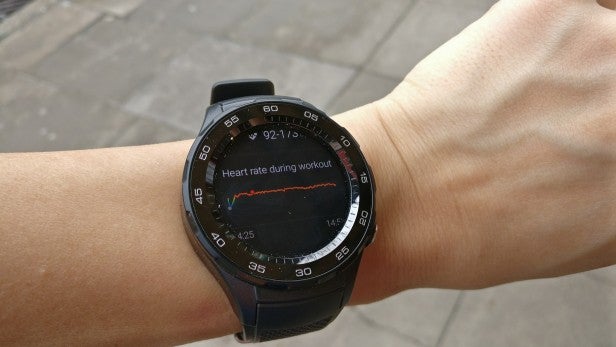 The distance covered was what you’d expect for a watch with GPS. Annoying as it is, different GPS sensors will result in different readings for a number of reasons – poor signal being one – but the Huawei Watch 2 wasn’t far off my phone’s readings.

Post-run and you get some useful analysis beyond the basic distance and pace. A Training Effect score indicates the level of your effort; a VO2 maximum estimation provides an idea of your overall fitness level; and a recovery time needed measurement lets you know how long before your body is back at peak performance.

These are all genuinely useful for those looking to improve performance, so are compelling reasons to opt with Huawei’s own running watch app.

For the more basic activity tracking element, I found the step-counting was consistently around 200 steps behind the Fitbit Charge 2. You do get move reminders each hour if you’ve been sedentary for that period, including some that have you perform stretches; an animated avatar on the watch takes you through each movement. There’s no built-in automatic sleep tracking from Huawei, or from Google Fit, but third-party apps are available.

With a 420mAh battery, the Huawei Watch 2 is rated at having around two days’ battery life, which in testing was spot on – if not perhaps a little reserved in its estimation. You’d want to charge before your second night in any case, since it won’t quite make it to the morning. 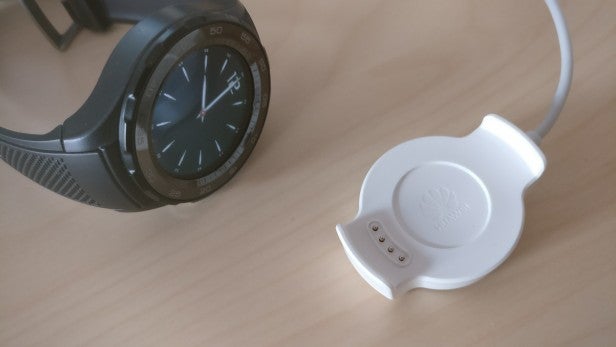 During a workout, you can expect about 10 hours of battery life with continued GPS and heart rate tracking, which is very good. Interestingly, there’s a “Watch Mode” available as an app you can run at any time, or something that kicks in automatically when the battery is critically low.

This simply displays a analogue watch face with your step counting as a basic complication. The always-on display is also turned off. If you turned this on with a freshly charged battery, you should  expect more than 21 days of battery life – although, of course, you’re missing out on nearly all of the smart parts of your smartwatch. 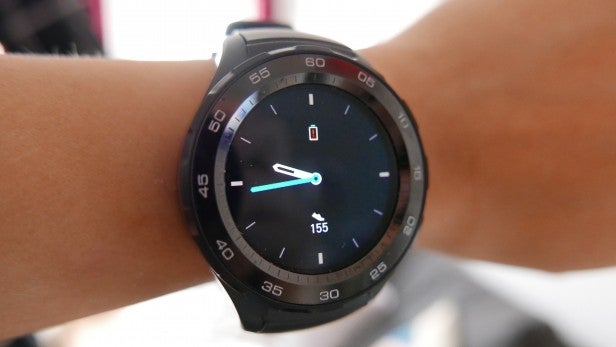 If you let it kick in automatically when the battery is critically low, you should get another day. It’s a handy feature for anyone who, like me, has felt the pain of being asked the time when wearing a dead smartwatch.

The watch is charged via a magnetic charging dock, which attaches easily without fuss. It doesn’t really prop up your watch, though; I prefer watches that can double as a bedside clock when charging overnight but it is at least very secure.

Should I buy the Huawei Watch 2? 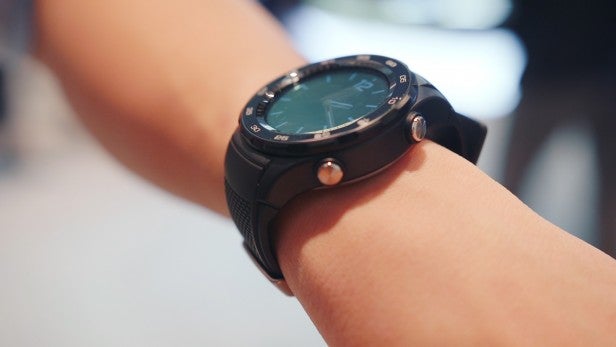 If your focus is predominantly on fitness tracking and you want a smartwatch to accompany you on a run, the Huawei Watch 2 ticks a lot of the right boxes thanks to its feature set. It’s lightweight and comfortable, and even looks fairly attractive for a sports watch.

However, if you’re coming from the original Huawei Watch then chances are you’re going to find it a step backwards in terms of design; it feels generic and uninspiring. The small display appears worse because of that thick bezel, which means you’re dealing with a large watch casing that offers no benefit.

The Watch 2 is also unlikely to have much appeal to those with smaller wrists due to its chunky design.

As one of the first few watches to launch with Android Wear 2.0, however, it’s a promising start – but not quite the ultimate Android Wear watch I was hoping for.

The Huawei Watch 2 has plenty to appeal to runners, but a bland design and small screen means it falls just short of the podium.