What is the Huawei Tron?

The Huawei Tron is an Android-powered games console that the Chinese manufacturer better known for making phones and tablets says it will be able to play PC, PS3 and Nintendo DS games, though quite it would do so legally is a discussion for another day…

Following in the footsteps of micro consoles like the Ouya and GameStick, the Tron is currently only expected to go on sale in China for around $120-$150 (Around £90) along with a wireless controller and some powerful specs under its tiny hood. 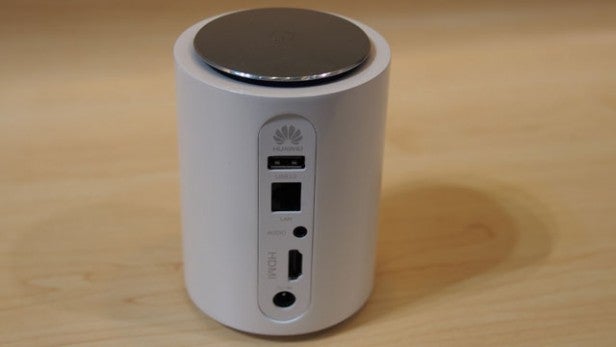 The cylindrical shaped console that looks a bit like a Mac Pro shrunken down is going to be available in glossy black and white versions and actually look suprisingly sleek. There’s a large standby button on top that glows blue when the console is turned on and around the back features UBS 3.0, LAN, Audio in and a HDMI port that connects the Tron to a TV.

The wireless controller closely resembles the Xbox 360 and Xbox One controllers with X,Y,B,A action buttons, two analogue sticks, D-Pad, triggers and bumper buttons all similarly positioned. Huawei also includes View, Menu and Mute buttons with a headphone jack and a large circular touchpad at the top of the pad to use for games that require touchscreen and mouse control.

The complete setup is relatively compact so it wont take up plenty of living room space, but the plastic build on both the console and controller does feel a little on the cheap side. It doesn’t really match the Ouya’s more attractive steel metal body either and looks a lot more sleek in black than it does in white. 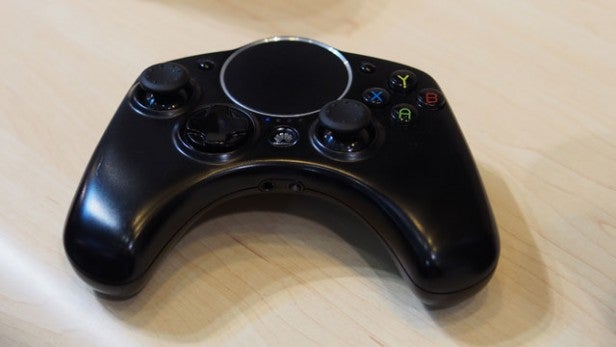 The Tron runs on a skinned version of Android Jelly Bean opting for its own user interface that let’s you view games, video, applications, settings and access the Huawei’s own store to download games. There’s no access to Google Play, though Dead Trigger 2 was one of the games optimized for the Tron. Huawei says 12 demos will be available at launch including PC titles ported to the platform. The Tron will apparently run PS3 and Nintendo 2DS games, but Huawei was unable to say which games are set to get the Tron treatment and how this would happen. 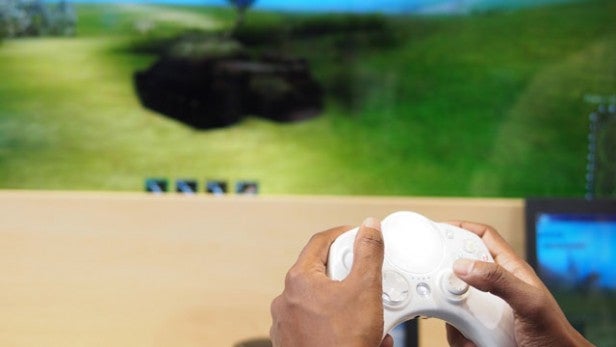 Powering the Tron is a Tegra 4 processor with 2GB of RAM and a choice of 16/32GB internal storage to save content like games and video which can be expanded up to 64GB via the Micro SD card slot. It also supports WiFi a/b/g/n/ac and Bluetooth 3.0 that used to hook up the controller. 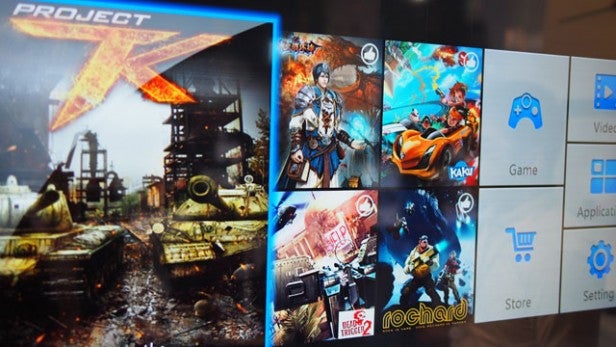 Testing the Tron with the not particularly enthralling tank simulator Project TK, the controller handles well and buttons were very responsive. We didn’t, however, get to put the big circular touchpad to good use. Gameplay runs nice and smooth thanks to its up to date Tegra 4 processing power and the only real signs of lag appear when you are moving through the home menu UI.

Huawei is not ruling out the Tron from shipping outside of China, although from what we’ve seen we don’t think it will be sorely missed. The console and controller as a package is well equipped to play mobile and tablet games, but the lack of Google Play access is going to be issue if it does ever make it out. Tipped to cost around $150 (£90) around it would be one of the cheapest Android based micro-consoles available but could be too restrictive to really have long term appeal.