The P40 is a great affordable flagship phone in most respects. It has the best camera available at its price, outperforming the pricier iPhone 11 when it comes to versatility in particular, and its hardware and software come together better than we expected them to.

The vanilla Huawei P40 undercuts the Samsung Galaxy S20, despite packing more megapixels and a mightier zoom. With no wireless charging and a lower refresh rate screen though, have too many compromises been made to hit its £699 price?

£699 is something of a no man’s land when it comes to smartphone prices. It isn’t quite a flagship cost with the iPhone 11 Pro and Galaxy S20 Ultra costing well over £1000, but neither is it an upper-midrange price, like the £499 Realme X2 Pro or Samsung Galaxy A-series phones.

It’s a new niche of ‘affordable flagship’, and it’s likely where many cost-conscious tech fans pining after flagship features will settle when buying a smartphone during these financially challenging times. 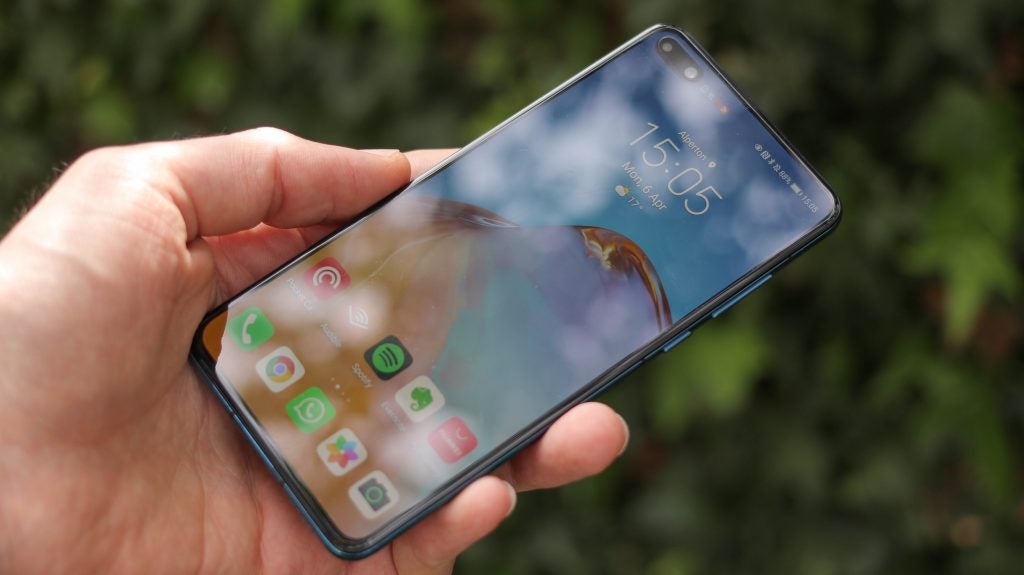 When we first saw its specs, the P40 felt like an instant compromise alongside the P40 Pro – less zoom, smaller, inferior screen, more traditional design and no wireless charging. But, actually, after over a week with it (and specifically its camera), it offers something different, and is a decent bit of tech in its own right, especially for anyone after a smaller smartphone footprint.

Like the P40 Pro, the P40’s albatross is its lack of Google Play Services, which continue to hurt Huawei’s Android devices. That said, if you can get past that, you won’t find a better camera than the P40 for the price.

There’s something to be said for small phones with flat screens, and the Huawei P40 checks both boxes.

At 6.1-inches, it’s easy enough to manage one-handed, and the lack of curves means accidental presses aren’t an issue. That said, the phone is also a unit – well built, dense and could do some damage if dropped on a toe – trust us. 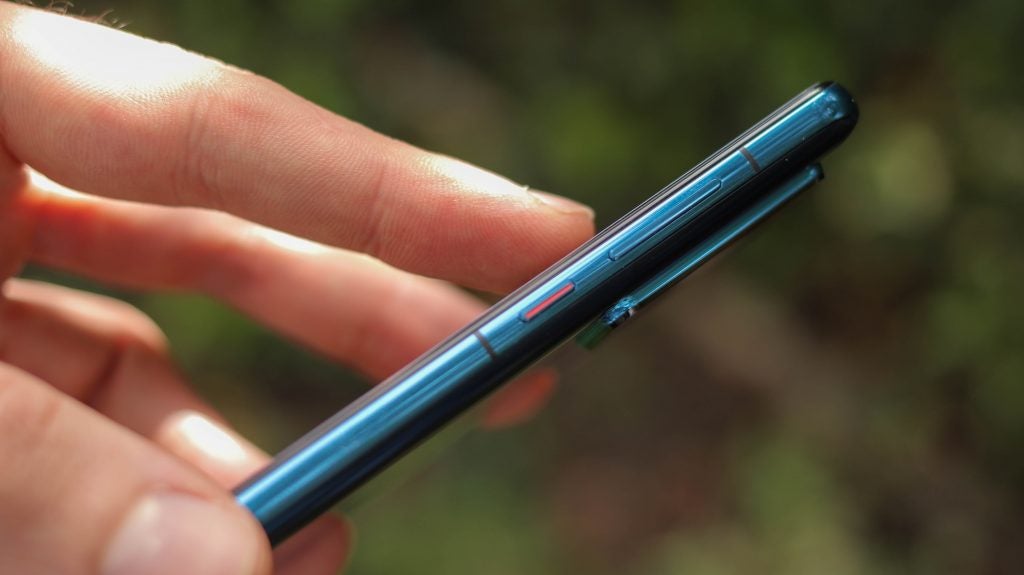 The curved glass back and buffed metal frame feel great, while the flat screen is low on bezels, but big on punch hole cameras, with a pill-shaped dual selfie camera in the top left.

The P40’s buttons are on the right, while all the other points of interest are at the base – a mono-speaker, SIM card tray, and a USB-C port. You can pick it up in three colours – Deep Sea Blue, Ice White and Black – with all packing a fingerprint-loving gloss finish.

The Huawei P40’s primary camera is almost identical to that of the P40 Pro, save for three letters – OIS. It features the same 50MP Ultra Vision camera with an f/1.9 aperture and a 23mm focal length, but the image stabilisation is electronic, Huawei terms it AIS. 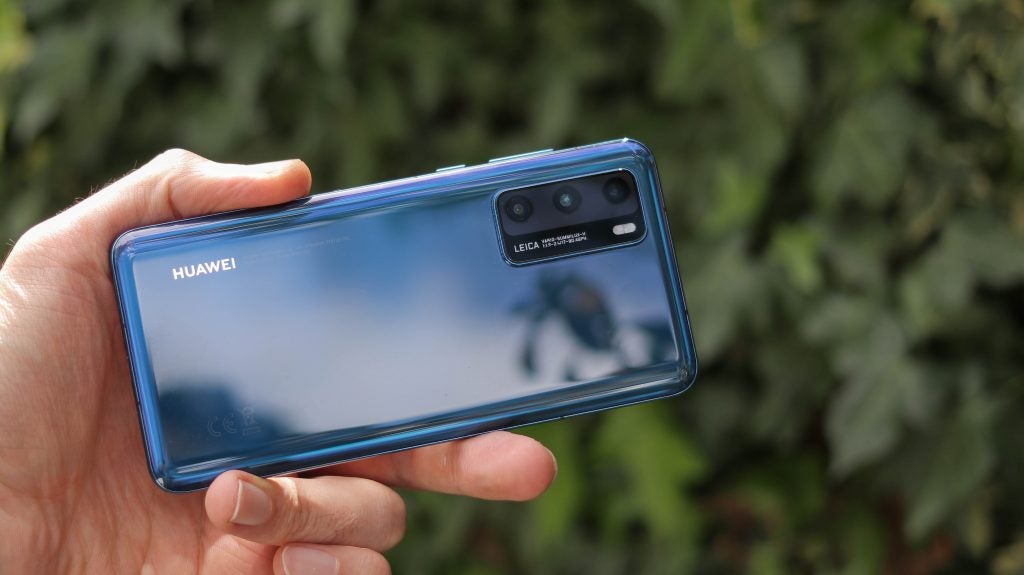 OIS is, however, found on the P40’s telephoto camera which delivers a 3x optical zoom, equating to an 80mm focal length, and there’s also a 16MP ultra-wide camera with an f/2.2 aperture and a 17mm angle of view.

We’ll get this out of the way – all three cameras deliver more detail and arguably better results when shooting stills than the Galaxy S20 and S20 Plus. That’s a pretty huge deal considering the P40’s price. 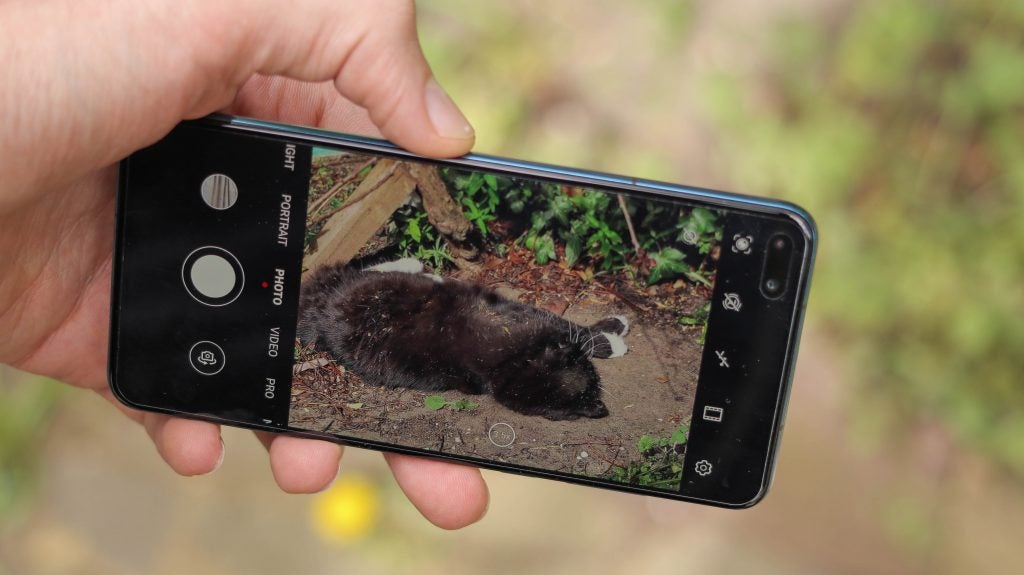 Photos captured on the main camera are exceptional. The sensor’s 50MP resolution produces 12MP images that grab loads of detail, building on the 10MP shots older Huawei phones, including the P40 and Mate 30 Pro captured.

Dynamic range is also excellent for the most part, though shadow boosting can be a little overzealous at times. Saturation and sharpening are relatively tapered compared to processing on older Huawei phones and are scaled right back when set aside snaps from the Galaxy S20 series. 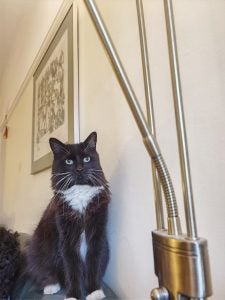 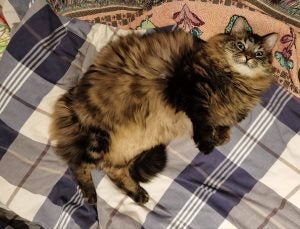 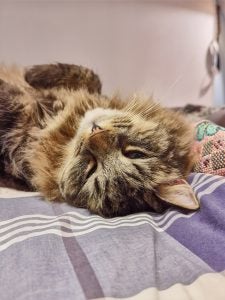 The phone’s strength extends across all three cameras. Its telephoto camera outperforms the OnePlus 7T Pro, S20 and S20 Plus, but falls behind the Oppo Find X2 Pro, S20 Ultra and, of course, the P40 Pro. We can’t state this enough though, for the price, it’s the best you can get when it comes to Android cameras.

As for the ultra-wide camera, it isn’t quite as wide as some but fits the bill when it comes to detail. Thanks to the fact it features autofocus combined with a macro mode, it’s more versatile than that of the iPhone 11 Pro and Samsung Galaxy S20. 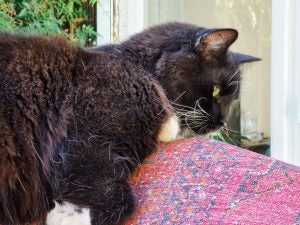 Some smart modes get rid of elements in shot and help with edits, but even without them, the P40’s camera will still be head and shoulders above the £699 Android competition.

The same can be said of the selfie camera, which also stacks up well in real-world use. Its 32MP resolution is ample, and the primary sensor is paired with a secondary IR camera for more secure face unlocking. It also shoots up to 4K front-firing video, which looks great.

Speaking of video, this is one area the P40 does well, but the S20 series does slightly better, with its snappier focusing. Footage captured on the main camera looks stellar, is well stabilised, and any fans of more natural levels of saturation and punch would prefer Huawei’s video style to Samsung’s.

Unlike the competition, the P40 doesn’t feature a high refresh rate display, instead, capping out at 60Hz. It also loses out on the accreditations other displays so proudly tout – there’s no official HDR badge here, though you do get a perfectly respectable OLED panel with FHD+ 2340 x 1080 resolution.

Viewing angles are excellent, brightness is good indoors and out, and while we would have liked a smaller punch hole and a higher refresh rate – either 90Hz or 120Hz, the P40’s screen nevertheless does a decent job day-to-day.

It’s challenging to test a smartphone to its fullest when you’re self-isolating, so while our real-world use case wasn’t too demanding, the P40 aced our battery benchmark tests. Particularly, it delivered amongst the most impressive screen-on time we’ve seen to date, with a 90-minute video depleting it by around 7% at full brightness.

Practically speaking, light users should be able to get two days out of it, and moderate to heavy users will unlikely struggle to go from morning to night on a single charge, unless you’re 5G downloading and Netflix watching all day.

The phone doesn’t charge as quickly as the P40 Pro, which powers up at 40W charging rates. Instead, the P40 charges at 22.5W, making it from 0 to 100% in just over an hour. Additionally, it doesn’t feature wireless charging.

Powered by a Kirin 990 paired with 8GB RAM, the Huawei P40 isn’t the most powerful £699 smartphone, but it’s plenty powerful nonetheless, and this is reflected in day-to-day performance. 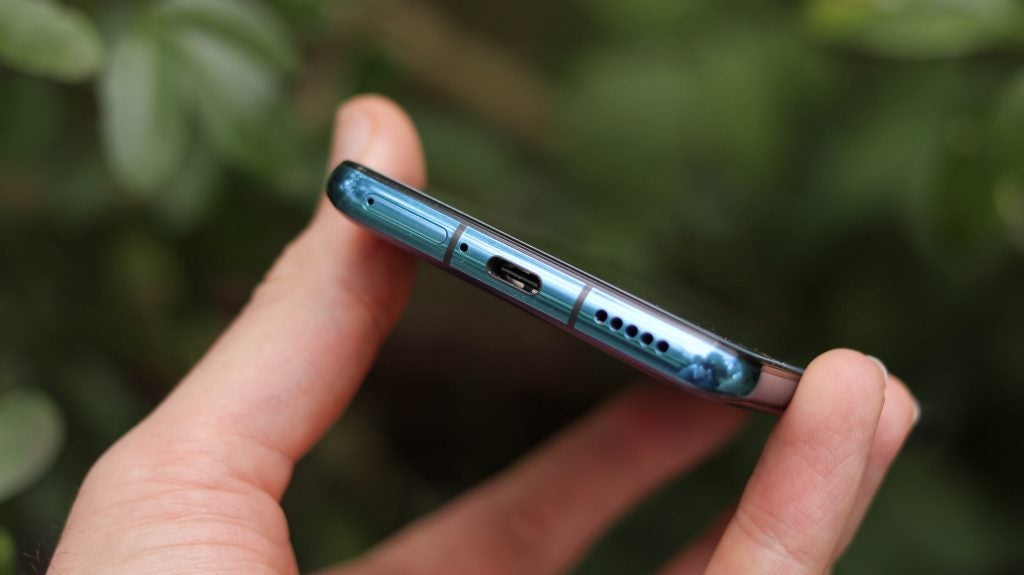 Whether gaming, UI swiping or photo editing, we didn’t find ourselves waiting for anything. The phone’s internal storage is either 128GB or 256GB, and it supports Huawei’s Nano Memory cards too.

With 5G data speeds – not a given at the price, fast WiFi and NFC, not to mention a responsive under-display fingerprint scanner and fast face unlock, nothing major is missing here when compared to pricier flagships.

Huawei P40 Software – How much of a problem is no Google?

Huawei’s software story is a mixed bag right now. It’s better than it once was – when the Mate 30 Pro launched, the AppGallery was anaemic at best. Now, it’s fleshing out nicely.

Once we were concerned about how you’d get apps onto a Huawei phone, now we’re more concerned that some apps just won’t work on one. Take Uber, for example, or the Marvel Comics Unlimited App, or even Asana, a popular project management tool. None of these will work without Google Services, which is missing from Huawei phones – here’s the Huawei trade ban backstory in case you missed it. 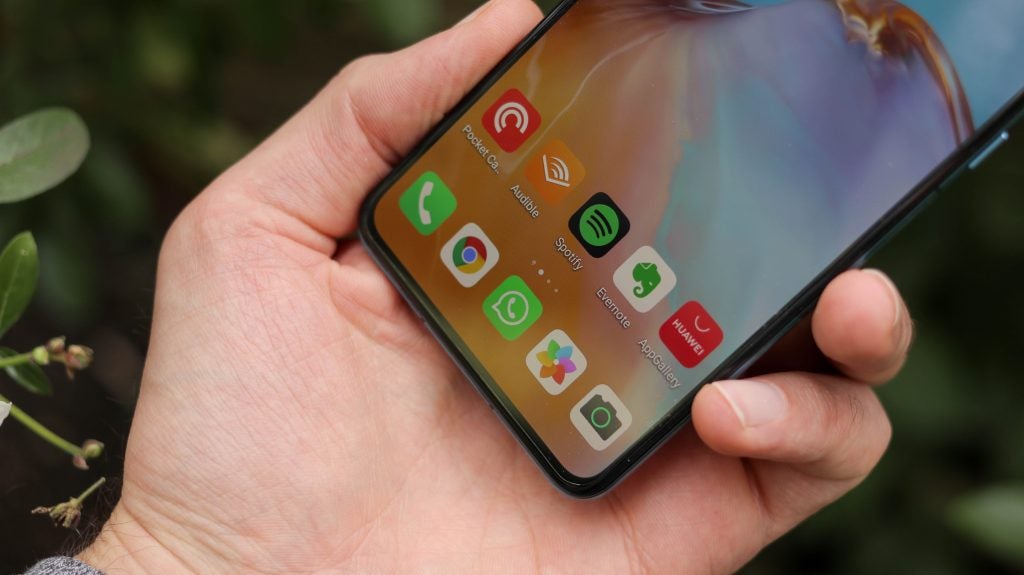 The Google apps that won’t run include Docs, Drive, Gmail, the Play Store and YouTube or YouTube Studio. Additionally, Google Meet won’t run, nor will Hangouts, so if your business is set up as a G Suite organisation, then a new Huawei phone won’t make sense.

That said, there are some surprise wins too. Google Maps, Translate, and Chrome all work great – albeit without linking to your Google account. Considering there’s currently no mapping solution available natively, it’s a very good job Google Maps works.

For anyone less beholden to Google, therefore, the P40’s software is excellent 95% of the time. The camera UI, which was the main thing we used is nippy, the core UI is smooth and stable, Huawei has supplemented Android 10 with some great multi-tasking features, and it’s easy to find apps for it.

To get apps onboard the P40 or P40 Pro, you can use Huawei’s AppGallery, a third-party app store, including APKMirror, or you can download them directly from the host site – Facebook and WhatsApp make their APKs available, for example. This takes a bit of scouting around but isn’t too arduous.

Should you buy the Huawei P40?

The P40 is a great affordable flagship phone in most respects. It has the best camera available at its price, outperforming the pricier iPhone 11 when it comes to versatility in particular, and its hardware and software come together better than we expected them to.

It also undercuts the Samsung Galaxy S20 5G by £200, and the vanilla S20 by £100, despite delivering superior imaging clout. That said, with no wireless charging or 90/120Hz displays, sacrifices have been made.

The main reason not to recommend the P40, is, unsurprisingly its lack of Google services. Check out this review’s software section for more, but Google fans or anyone bound into its ecosystem will want to avoid the P40 as a result.

If none of that puts you off though, pick one up, by all means. After all, the P40 could be the perfect affordable flagship for anyone trying to consciously uncouple themselves from Google’s mighty grip.