The Huawei P20 Lite has some of the nicest fit and finish in the mid-range space, plus some powerful features that set it apart from the competition – but an older processor means its days are numbered.

What is the Huawei P20 Lite?

The P20 Lite hopes to embody the looks and sensibilities of Huawei’s flagship P20, but without the top-shelf price tag.

To achieve this, the device swaps out the company’s most powerful processor for a more modest chipset, adopts a few subtle design differences and shoots using a distinctly different dual camera setup.

At a glance, you’d be hard-pressed to tell the Lite apart from its more distinguished and capable sibling. By eye they’re around the same size (although the full-fat P20 is marginally taller, narrower and thicker), sport a similar glass and metal construction, and the front of each phone is dominated by an expansive, elongated display.

That said, there are some cues that hint at the Lite’s more affordable nature. Unlike the P20’s body, where the curved cover glass flows into the metal banding around the phone’s edge, the Lite has a more distinct seam line where the two materials meet. Arguably, it isn’t as elegant to the eye, but in the hand it provides an extra groove under-finger for improved grip. 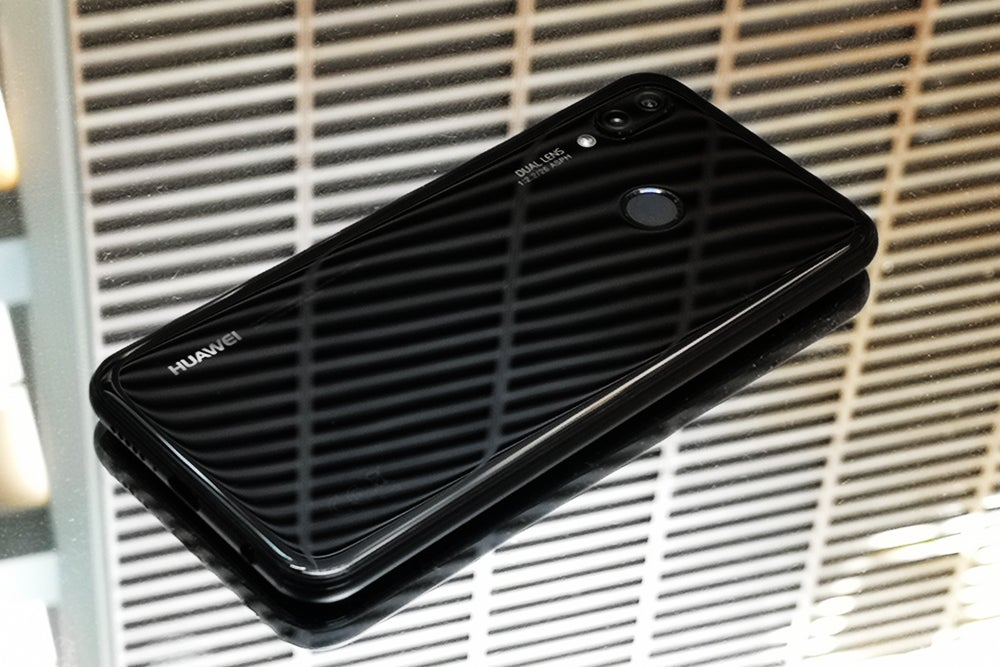 All of the phone’s metal hardware controls lie along its right side and are comfortably positioned for use with either hand, and the volume rocker sitting above the power key.

A hybrid SIM tray can be found on the phone’s left side; depending on the region in which you pick up the P20 Lite, it will accommodate a nano-SIM and a microSD card, or grant you the ability to trade the microSD card out for a secondary nano-SIM.

As with most of Huawei’s 2018 handset lineup, the P20 Lite makes the jump to a USB-C connection at its base for added convenience, most notably thanks to its reversible design. Unlike the standard P20’s microphone and speaker grilles, the Lite retains a standard 3.5mm headphone jack along its bottom edge, too. This is great news for those who haven’t yet made the jump to wireless Bluetooth headphones or those who don’t subscribe to a dongle-filled future.

One of the first things that you might find surprising when picking the P20 Lite up is how, in a way, it lives up to its name. At 145g, this is a surprisingly lightweight handset, especially considering the liberal use of glass across its back.

Aside from obvious shortcomings, such as the need for constant polishing if you’re not a fan of fingerprints and smudges, there’s also the added fragility that such a material choice brings.

In the case of the Lite, this risk is compounded by the fact that, unlike many of the increasing number of glass-backed phones now on the scene, there’s no specialist material science at play here. Corning’s Gorilla Glass has cemented itself as the de facto toughened glass brand to use on tech, but in the case of the P20 Lite, all you’ll find is off-the-shelf tempered glass. As such, handle with care.

There’s also no water-resistance at play here – a key selling points of the standard P20 and P20 Pro – so the Lite is best used clad in a case and away from showers, puddles and pools.

A keen eye might also spot that Huawei has relocated the fingerprint sensor compared to the other P20 handsets. Instead of mounting a thin strip of sensor beneath the display, a much larger circular sensor can be found at the centre of the phone’s rear, set into the glass – similar to last year’s P10 Lite. 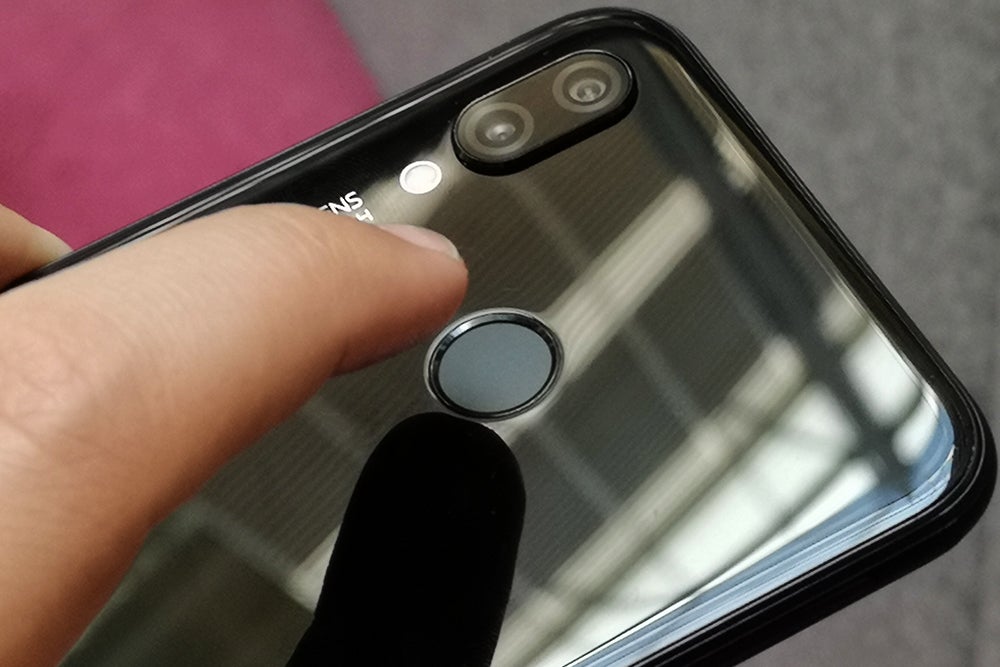 In everyday use, this actually makes for far more comfortable and sensible placement; it sits where your fingertips will naturally rest. However, in conjunction with Huawei’s software, it also supports a myriad of gestures that help enhance user interaction – more on that later.

In the smartphone world, 2018 has come to be considered as ‘the year of the notch’. The Essential Phone and iPhone X popularised this design quirk last year, and we’ve subsequently seen more and more handsets adopting a notched screen in order to push the boundaries of just how much of a phone’s frontage can be occupied by display.

In the case of the Lite, Huawei is actually giving you an imperceptibly larger panel than the one used by the vanilla P20 (5.84 versus 5.80-inches on the latter), with a tall 19:9 aspect ratio to boot. It actually makes for one of the best screen-to-body ratios out there (80.5%) when compared against other devices around the Lite’s price point.

The notch itself is about half the width of the one found on the iPhone X, leaving plenty of space within the UI for various indicators and notification icons on either side. If you don’t like staring at the notch, Huawei has included a software solution to hide it– this colours the notification bar black to match it, where possible. It’s a smart inclusion, if you’re not notch-inclined and prefer the slim-bezelled look of devices such as Samsung’s Galaxy S9. 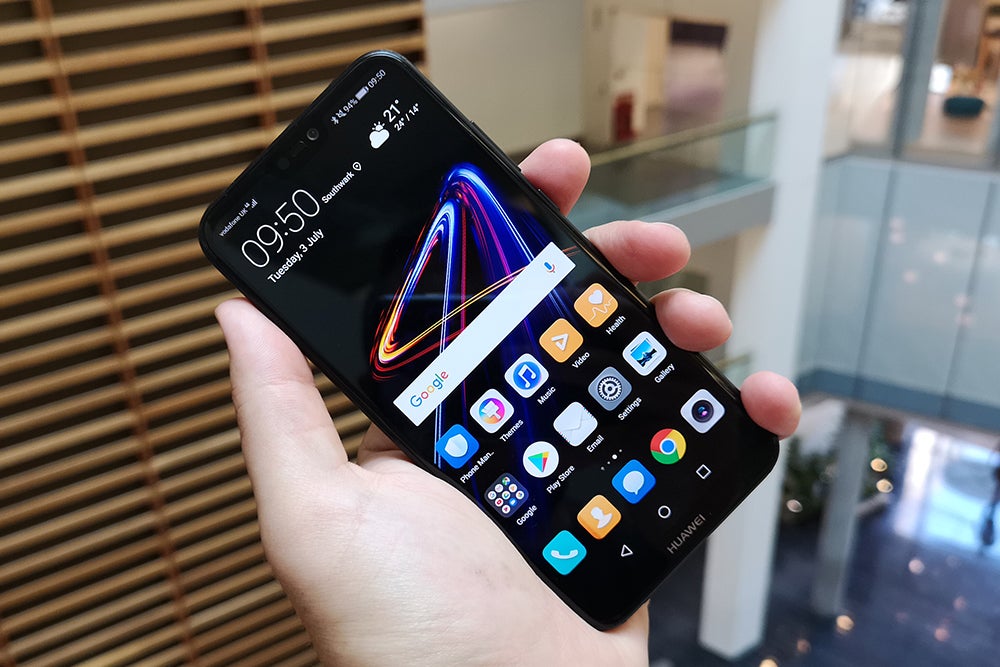 Reaching the top of the screen one-handed is also possible, albeit with the need for a little shimmy of your hand up the body of the phone. There is, in fact, a one-handed mode baked into Huawei’s Emotion UI overlay that’s also readily accessible via a quick swipe across the on-screen navigation keys. It shrinks down the interface towards the bottom left or bottom right, to make reaching the top of the UI or one-handed typing that much more palatable.

As for the quality of the screen Huawei’s used, the P20 Lite rocks a Full HD+, 2280 x 1080 LTPS (low-temperature polysilicon) LCD, which technically places it above the standard P20 with regards to pixel density. On paper, it means sharper imagery than Huawei’s flagship. However, like the difference in their screen sizes, the gap is too narrow to suggest it’s actually advantageous.

Unlike the larger P20 Pro, there’s no HDR support on offer to tie into services such as YouTube or Netflix. Nevertheless, in general use, the Lite still pushes out pleasing visuals. Colours and contrast both appear balanced, with natural-looking imagery and smooth motion. Whilst there’s little obvious distortion at more extreme viewing angles, brightness drop-off can be quite severe.

As well as automatic brightness adjustment, which for most smartphones is a given at this stage in the game, the P20 Lite also provides you with fine-grain control over the display’s colour temperature. This lets you jump between three preset colour profiles, or manually edge it towards the colour tint of your choice. Personally, I prefer the stock setting, as it looks as though Huawei’s display technicians have done their job with the default profile.

There’s also an Eye Comfort mode, which is great if you’re prone to eye-strain or you’re a habitual late-night Instagram peruser. It adds heavy-handed warming to the screen’s colour temperature, which reduces the amount of blue light emitted, making visuals easier on the eye and brain in such conditions.

You can enable it manually, schedule it so that its effects turn on and off automatically at times set by you, and adjust just how much of a warming effect it has on the appearance of the Lite’s display.

At the heart of the P20 Lite lies Huawei’s own HiSilicon Kirin 659 octa-core chipset. It’s become the brand’s go-to processor for its beefier 2017/2018 mid-range phones, powering everything from the Honor 7X to the Huawei P Smart.

It’s a perfectly competent piece of hardware, but a little long in the tooth at this stage. It’s most frequently compared against the likes of Qualcomm’s Snapdragon 625, which itself is an older chipset by today’s standards. Huawei has paired the 659 with 4GB of RAM – which, on paper, bodes well for the phone’s general performance and long-term stability.

In practice, it’s a decidedly middle-of-the-road setup that translates to smooth operation when swiping around the UI. It’s comparable to any flagship, but cracks begin to show when you open and switch between apps frequently.

Almost without fail, opening a fresh app will land you on a blank screen for a few moments before the interface pops up, and hopping from one app to another or multitasking results in dropped frames throughout the interface’s animations. Although neither trait hinders everyday use, they both remind you that despite this being a member of the P20 family, it doesn’t come as tightly wound as its flagship-class siblings.

Huawei does include its own Phone Manager app, which is designed to keep things tidy behind the scenes and help maintain long-term stability. If you’re concerned about performance dips, this should be your first port of call. Not only will it give you some indication of whether or not everything is as it should be, but it will also provides you with the means to rectify things if there is a problem.

It features one-touch operation and awards the Lite with an overall performance score, but includes standalone cleanup and virus-scanning tools too.

Some low-end and mid-range phones fall down on limited internal space, but there are no such concerns with the P20 Lite. At approximately 10GB, a sizeable fraction of the phone’s ROM is occupied by system files out the box. However, with 64GB to play with overall (32GB and 128GB versions are available in other markets), there’s still plenty of room for media, apps, games and files. Plus, unlike the higher-end P20 devices, the Lite supports microSD expandability (up to 256GB).

Emotion UI (or EMUI) has always been a heavy-handed Android overlay that takes some getting used to if you’ve not encountered it before. By default, there’s no apps drawer (although more recent iterations of the interface include the ability to add it back in), there are a number of unique gestures and shortcuts to learn, and Huawei bundles a sizeable number of its own apps on there too. 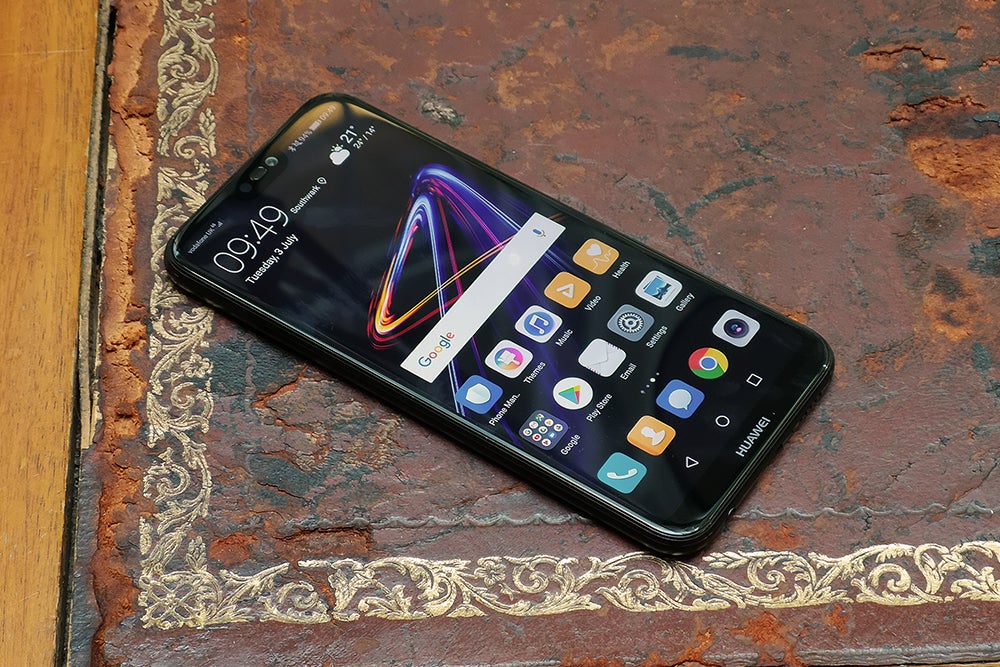 It’s mildly disappointing that the Lite loses out on running the absolute latest versions of both Android and EMUI, as enjoyed by the standard P20 and P20 Pro, but the Android 8.0-based experience (with EMUI 8.0) on top still feels current.

It’s no Nova Launcher, then, but you’re given plenty of opportunity to personalise the P20 Lite’s interface. The most prominent is by way of Huawei’s own Themes app, which features both official and fan-made offerings, organised by category and popularity. You can customise all manner of quick settings within the notifications pane and it seamlessly integrates app shortcuts, first introduced on Android O.

As well as the aforementioned one-handed mode, you can jump into split-screen multitasking by way of the app switching/overview key. This is via a long-press and tap from within an app, or a couple of taps from anywhere – and if apps aren’t optimised for the phone’s elongated screen, there’s an built-in tool in place to force them to scale appropriately.

Despite warnings that this feature might not be compatible or cause problems with some app, it worked flawlessly in my testing 100% of the time.