If you're after a media machine with a high-res display that will easily handle gaming then the Huawei MediaPad M5 8.4 is a good pick.

In 2018, Android tablets are pretty much dead. There are barely any firms making new models, and Google rarely adds new features through big software updates.

Yet this hasn’t deterred Huawei, which is persevering with a range of new MediaPads. The lineup consists of two 10.8-inch models and an 8.4-inch version – which I am reviewing here.

With its aluminium body, smooth back and curved corners, Huawei’s MediaPad 8.4-inch doesn’t tread new ground for tablets. It has the whiff of an iPad, but without being too brazen about it.

It feels well built and is super-light at 316g. I’ve been carrying it around in my bag for a few weeks now and it barely feels heavier than the Kindle Oasis it replaced. 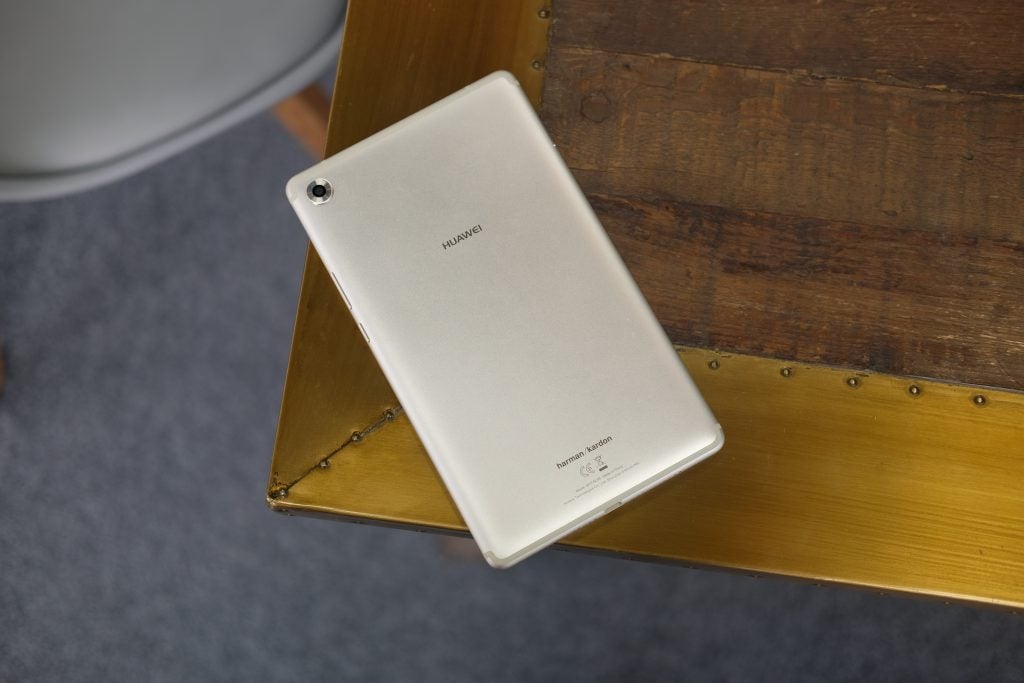 The front of the device is dominated by the display, but unlike many of the new phones coming to market this year it retains a bezel around it. This is fine on a tablet, since it gives your hands something to grip onto. A fingerprint scanner sits below the display and it works superbly; a Huawei logo and front-facing camera sit above it. The overall design is clean and basic.

One glaring and, frankly, ridiculous omission is the lack of a headphone jack. I’m happy to live without one on a phone, since it’s a small and slim device that often loses the 3.5mm port to aid water-resistance. But neither are the case on the MediaPad M5, and it seems Huawei has ditched the port simply to be able to extend the dual speakers that sit along the top and bottom edges – which in my opinion is a silly sacrifice. At least there’s a 3.5mm dongle in the box.

The Huawei MediaPad M5’s 8.4-inch panel is comfortably the best thing about this device. .

The sharp quad-HD LCD panel – OLEDs are rare on tablets and super-expensive at this size – is colourful and bright. It can’t match the iPad range nor Samsung’s Galaxy Tab S3 for sheer quality, but it offers an decent improvement over the panels used by Amazon on its Fire tablets.

However, I do take issue with the widescreen 16:10 aspect-ratio: tablets are far more usable in a squat 4:3 format. It’s better for reading and browsing and means that apps don’t feel quite so stretched. 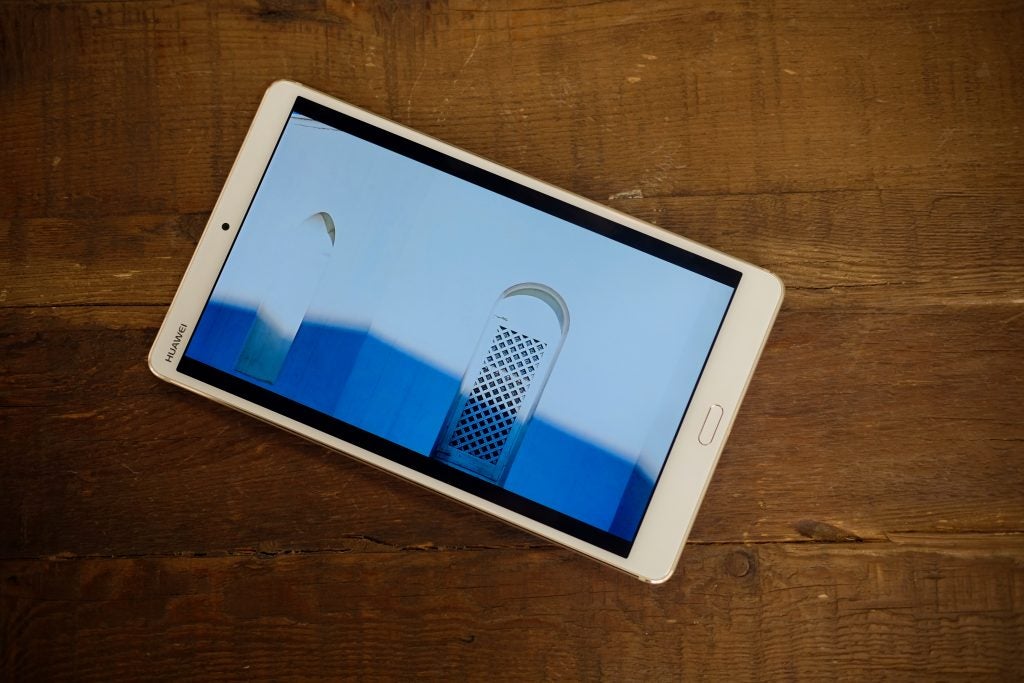 But my biggest issue with the display is that there’s very little that can take advantage of it. Like many Android tablets – usually cheaper ones, I must say – the MediaPad M5 8.4 lacks the right support for streaming HD video. This means you’ll be limited to SD streaming on Netflix, Prime Video and Google Play Movies. For a media-dedicated tablet, this appears to be a major oversight.

The 8.4-inch version of the M5 also lacks both the stylus and keyboard support of its bigger brother – although this fits with Huawei’s idea of this being a tablet predominantly for Netflix binging, as opposed to work.

Powering the Huawei MediaPad M5 8.4 is the Kirin 960, a slightly older chip that Huawei has used in phones such as the Mate 9. It lacks the AI smarts of the newer Kirin 970, but it’s perfectly adequate for a tablet.

My biggest issue with the previous MediaPad tablet I reviewed – the 8.4-inch M3 – was that it struggled with anything taxing. Boot up a game such as Real Racing, or try to work on a large photo file, and you’d end up stuck in a loop of lag and crashes. That’s no longer the case here, and I’ve been impressed by how well this dinky tablet performs. 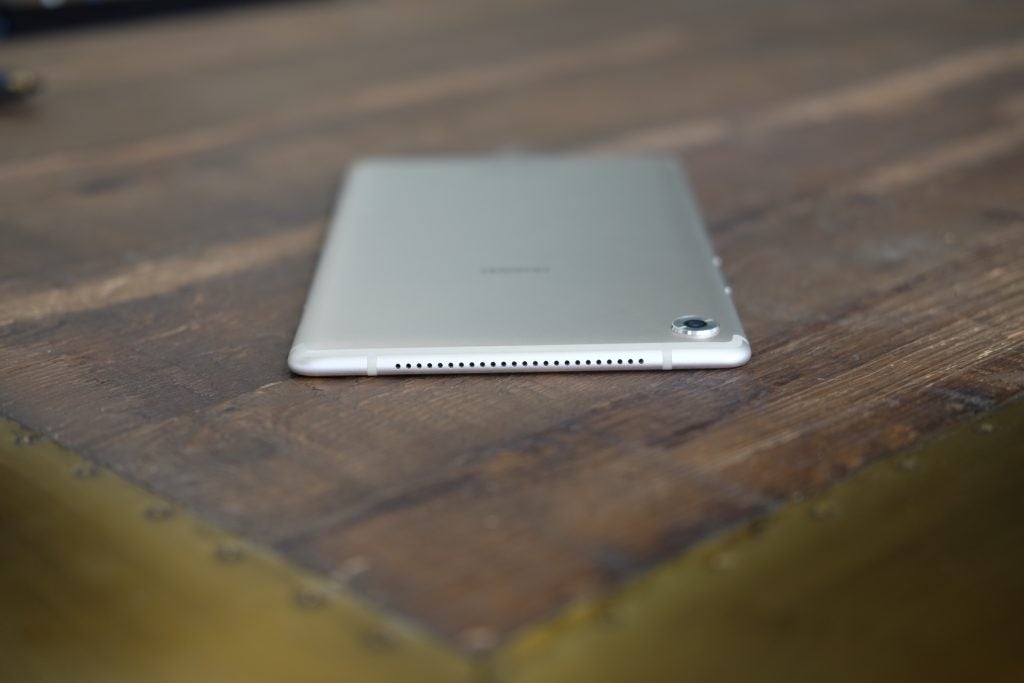 Google Play isn’t full of graphically intensive titles, but I could happily play Lara Croft: Go or Horizon Chase without any dropped frames. The 4GB of RAM is plenty, too, keeping apps in memory long enough so that you don’t feel like you’re reloading everything all the time. Storage starts at 64GB, with a slot for a microSD for expansion.

The speakers are pretty decent, too, again adding to the media theme of this device. They’re not front-facing as they are in the Pixel 2 XL, instead pushing the sound out from the bottom and top edges. Sound is loud and far better than the iPad Mini or any other similarly sized slate. My only issue is that it can often sounds artificially enhanced and quite echoey as a result. Hi-Res audio is supported and Huawei has teamed up with Harman, a part of Samsung, to tune the speakers.

I still find it bizarre that a tablet such as this has a camera on the back. Surely, it’s is likely that someone who spends upwards of £300 on a fairly niche device such as this will also be carrying around a smartphone. Even if it’s something as well-priced as the £150 Moto G5, then it will provide a better experience for taking pictures.

The images produced by the tablet are fine – colours are quite well produced and the camera app is surprisingly quick – but everything feels too bright and fake. There’s an 8-megapixel camera around the front that actually takes okay selfies and works well for video chats, alongside having support for 4K video recording. However, due to the lack of any obvious form of stabilisation, footage looks very shaky.

Huawei will be selling both LTE and Wi-Fi versions of the M5 8.4. I’ve been testing the 4G LTE version, and having a small tablet such as this always connected is surprisingly useful. You can even use it to make calls and send text messages.

Huawei hasn’t yet mastered mobile software, instead cramming its EMUI skin with far too many iOS-like features. But, on a tablet it doesn’t prove anywhere near as annoying as it does on a phone.

There are still far too many pre-installed games that I’d recommend you delete instantly. There are lots of duplicate apps, too. Look past these issues, however, and it’s a fairly good experience. It’s quick and not overly complicated to navigate.

EMUI runs on top of Android 8.0, so you can utilise handy features such as minimising certain video windows for better multitasking. Being able to pop up a Netflix video while you continue using the tablet for scrolling through Twitter is a handy addition.

The lack of any real tablet apps for Android doesn’t make much of a difference here, since the MediaPad M5 8.4 appears to have been treated like a very large phone by the operating system. This means apps such as Gmail, which does have some tablet benefit, renders as it does on your phone. 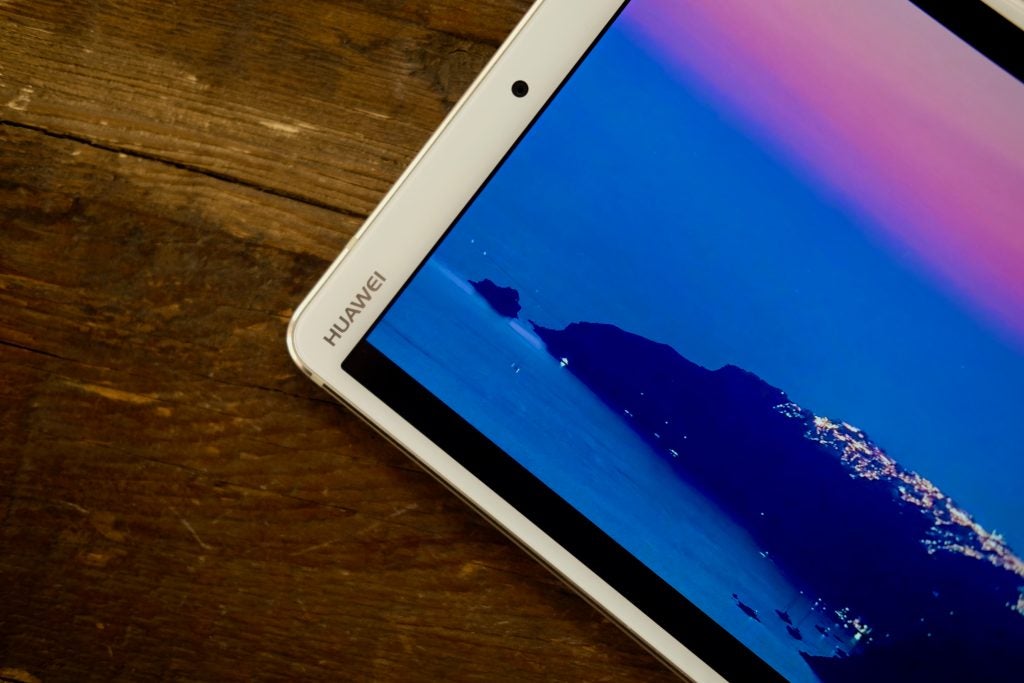 Like lots of Huawei tablets, the MediaPad M5 8.4 refused to successfully benchmark any test. Both AnTuTu and Geekbench crashed out halfway through, or threw out an error message at the end. As a result, I can’t provide any benchmarking scores currently. I’ll update the review if I manage to get it going. Realistically, though, the scores provided by these benchmark apps wouldn’t have had any bearing on the final verdict.

There’s a 5100mAh cell tucked inside the MediaPad M5 8.4 that has impressed plenty over the past few weeks. Standby times are great – vital for a tablet that is likely to spend much of its time idle – and an hour of streaming Netflix (at SD resolution, of course) consumed only 6%. That’s slightly higher than I’d get from an iPad Mini, and on a par with an Amazon Fire tablet.

Charging is via the USB-C port on the bottom of the device, and it powers up fairly quickly through the included power adapter. It will take around 3 hours to go from 0%-100%, which is what I’d expect from a tablet. 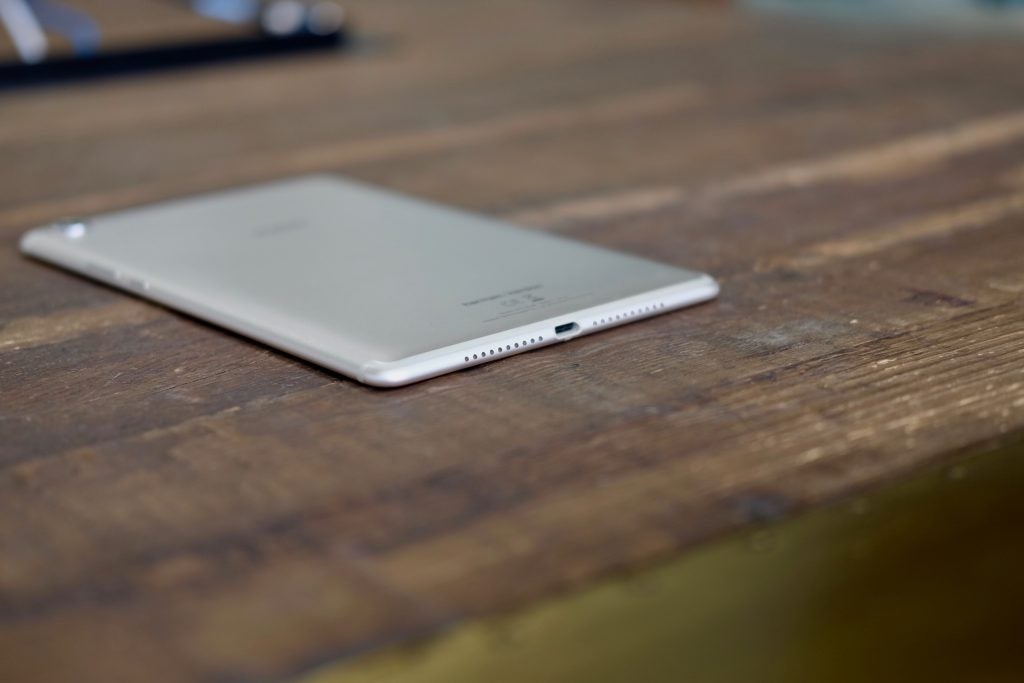 The biggest reason to buy the Huawei MediaPad M5 8.4 is that there isn’t much else on the market like it; it’s mainly Amazon that manufactures Android tablets of this size. This means that if you’re after a media machine with a high-res display that will easily handle gaming then the Huawei MediaPad M5 8.4 is a good pick. The iPad Mini from Apple is an option too, but that’s showing its age now.

However, there are far too many shortcomings with the MediaPad M5 8.4-inch for me to wholeheartedly recommend it to most people. The lack of HD streaming on Netflix and headphone jack are ridiculous omissions for a media-centric tablet.

A small tablet that packs good specs and a nice screen, but the Huawei MediaPad M5 8.4 feels like a missed opportunity.