The Huawei MateBook X is a brilliant ultra-portable laptop for those who find 1.3kg computers just that bit too heavy.

The Huawei MateBook X is an extreme lifestyle laptop. Sounds like a contradiction, doesn’t it?

This means Huawei has put all its attention into making the MateBook X as light and portable as possible without any obvious signs of compromise in its build. Get this: the Huawei MateBook X weighs around 300g less than the MacBook Air, and still feels incredible.

This is undoubtedly one of the best 1kg laptops ever in terms of fit and finish. You pay for it, as the MateBook X costs roughly the same as a MacBook Air specced up with the same 16GB RAM and 512GB SSD. And those Apple upgrades don’t come cheap.

Paying Apple money for a Huawei gadget may seem a big ask in a year the company’s reputation has taken such an almighty hit. And there is little reason to spend this much if you won’t appreciate how thin and light the Huawei MateBook X is.

The MateBook X’s design is its primary reason to exist in the wider MateBook range. It doesn’t offer the excellent value of the MateBook 13 or the power of the MateBook X Pro. You’d buy one of these laptops because you want something flashy, thin and light.

The MateBook X weighs 1.005kg according to my scales, is only 13.6mm thick and has a tiny footprint. Its 3:2 aspect screen reduces its width compared to other 13-inch laptops.

Three elements make the MateBook X stand out even among high-end slim and light models. First, it has one of the best implementations of a magnesium-aluminium alloy I’ve seen to date. 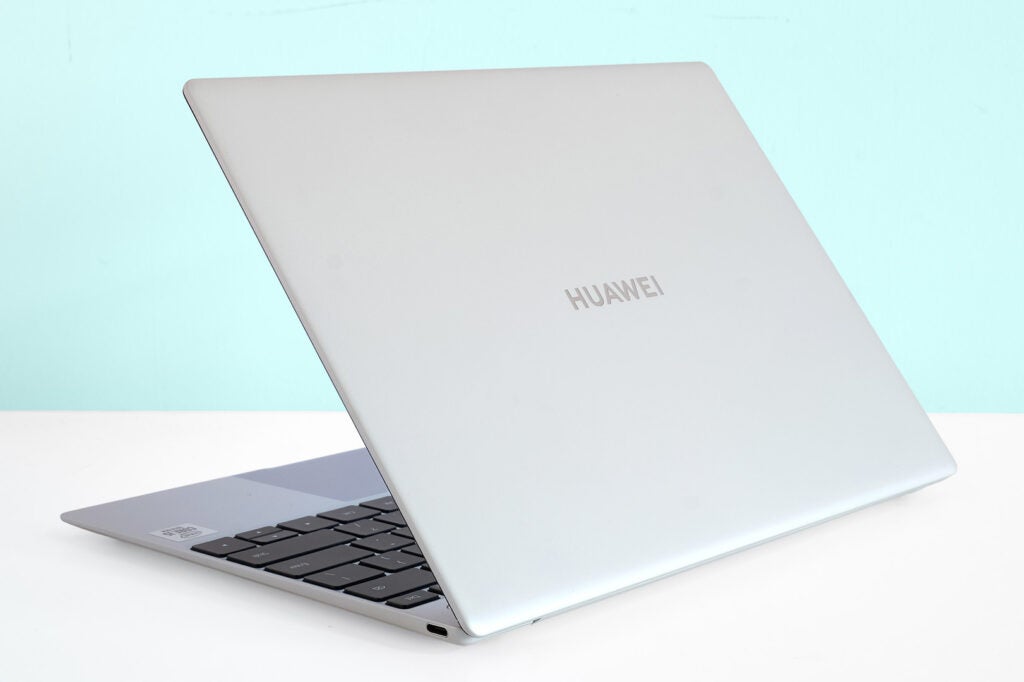 Magnesium is lighter than aluminium, but a magnesium-rich alloy can feel a little like plastic. The MateBook X absolutely looks and feels like metal, and the satin-matt finished used in each panel is excellent.

The Huawei MateBook X also has a very carefully designed display hinge that can be opened with one finger, without making the base lift off a table. And yet there’s still virtually zero screen wobble when you use the laptop on your knees.

The Huawei MateBook X is also dense, MacBook-style dense. A lot of very light laptops have a hollow feel, but there’s none of that here. 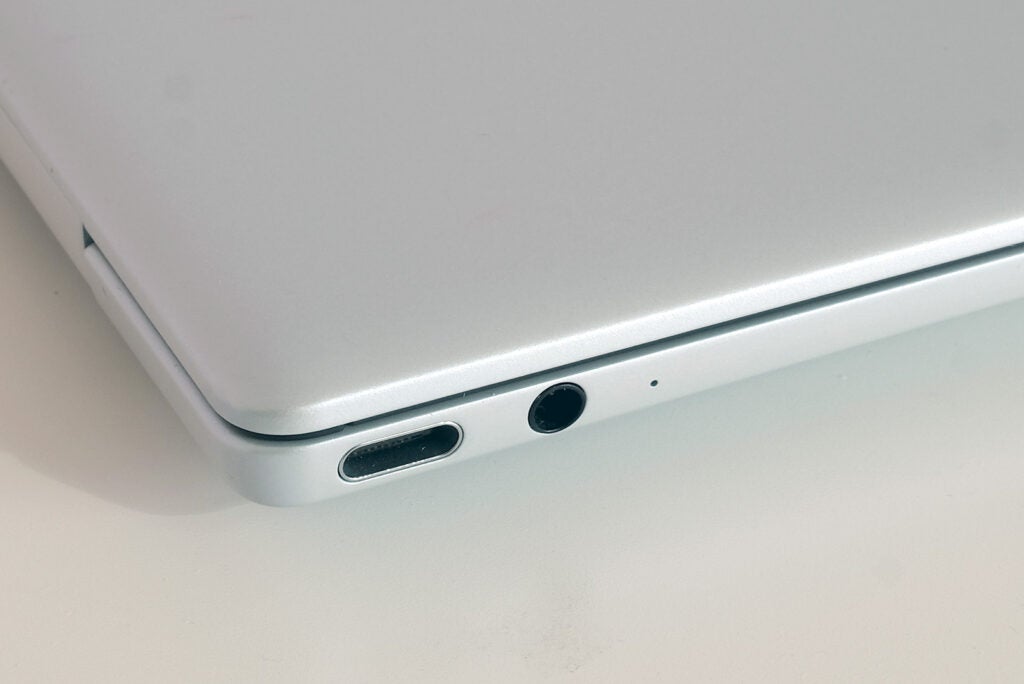 The Huawei MateBook X’s rigidity is also superb given its extremely low weight. Pick it up by one corner and there’s only fractional bowing of the frame. The screen is as stiff as they come. The keyboard doesn’t flex under the finger pressure of typing. Several aspects of the MateBook X’s design are quite exceptional.

Of course, the actual reason to buy a MateBook X is how breezy it is to use. Whether you’ll take it from room to room or country to country, there’s a specific appeal to a laptop this light that still feels solid and surprisingly tough.

The Huawei MateBook X has minimal connections. There are two USB-C ports. And, unfortunately, neither is a Thunderbolt connector. They do support DisplayPort, though, so connecting a monitor is no problem.

You get no memory card slot, no full-size USB.  But there’s good news. You get a MateDock 2 in the box. This features most of the bits the MateBook X misses including full-size USB, a USB-C, HDMI and VGA.

The Huawei MateBook X has a fairly shallow keyboard, but a very good one. Its keys aren’t light and clicky, but they have the darker character of a much deeper keyboard. I find it comfortable to type long-form articles on, and fast do to so.

It’s better than I expected after first using the MateBook X. I’ve never been a fan of slimline laptop keyboards, as someone who often uses a mechanical keyboard, but this is probably one of the best typing surfaces in a laptop of this size.

There’s a two-level backlight too. It’s nothing too special, with a distinct blue hue and only moderate top brightness, but it does the job. 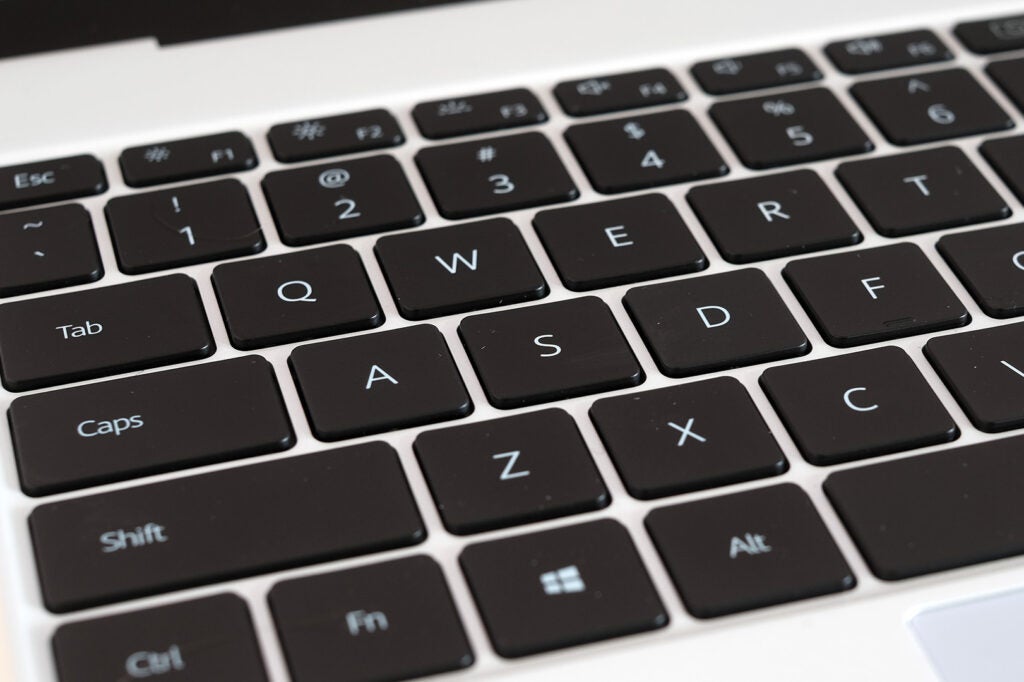 Huawei goes the extra mile with the trackpad, with mixed results.  This is not a traditional pad. It uses a haptic motor to deliver the “click”, although the pad itself does move slightly under the pressure of a finger press too.

Such a design means every millimetre of the MateBook X’s pad can be used as the clicker. There’s no dead zone. For a feel closest to a traditional pad I recommend setting the feedback to max and the sensitivity to “medium” or “low”. 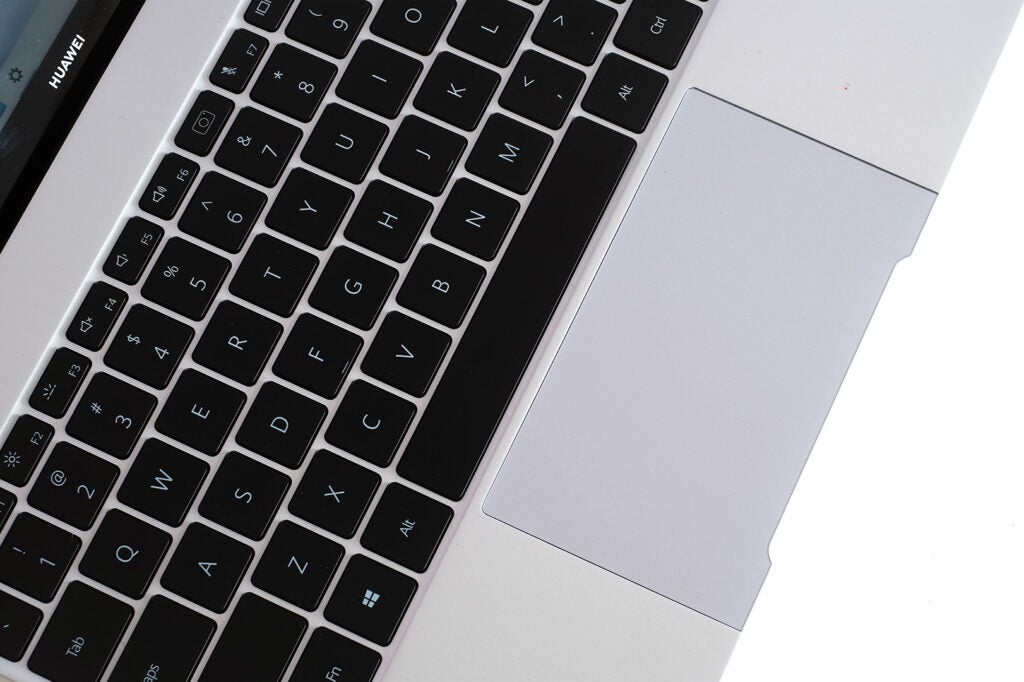 I have no complaints about the MateBook X pad’s size or materials. It’s a very large pad for a laptop this small, and the surface is excellent textured glass. The laptop also has a fingerprint scanner, in the ring of bright silver above the keyboard. It offers above average reliability for Windows 10 unlocking.

The webcam is less hot. Not only does it uses an uninspiring 720p sensor with similarly unimpressive image quality, but it also lives under one of the F-keys. It may be a clever way to keep screen borders trim, but the angle is very unflattering when you jump into a Zoom call.

The MateBook X features a 13-inch LCD of 3000 x 2000 pixel resolution. At this size that means you get a very sharp screen image. This is a touchscreen, but the hinge does not let you move the screen back particularly far for hybrid-style use.

This is a 3:2 aspect screen, reducing the width of the laptop while keeping a good screen area. Such a display shape is beneficial for many kinds of productivity apps, but is not so hot for video, which usually comes in 16:9 or wider. Play a movie and you’ll see black bars at the bottom and bottom of the image.

Colour and contrast are both good. I recorded a contrast of 1660:1 with a SpyderX Elite colorimeter, which is about as much as you can ask for from an LCD panel. And it means movies and games look rich and punchy. 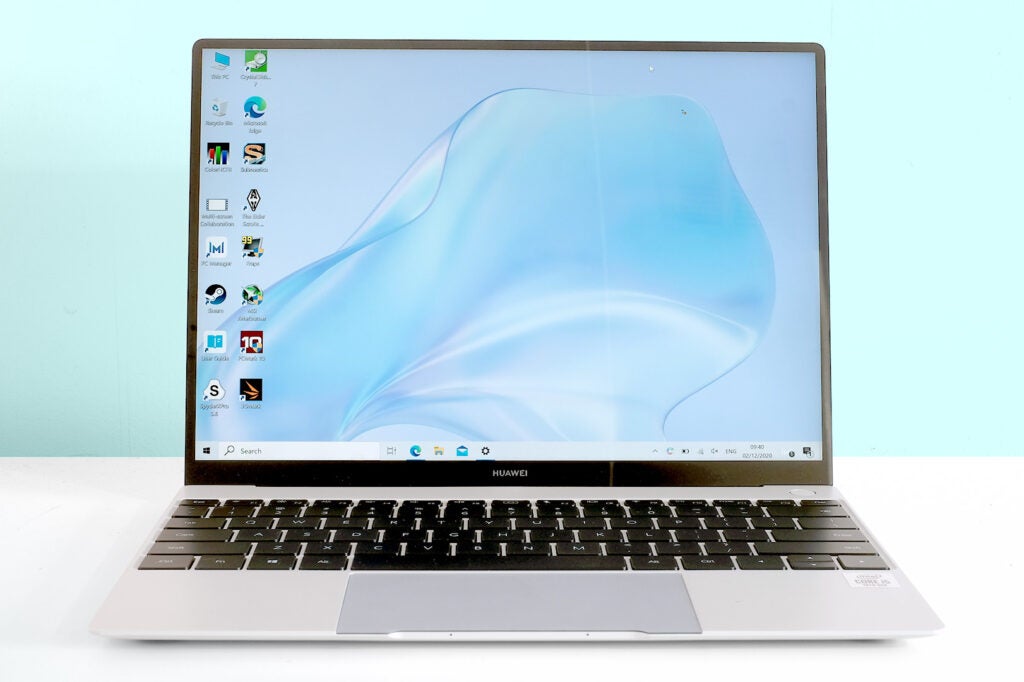 The Huawei MateBook X does not have a wide colour gamut screen, but again the results are easily enough to satisfy. It covers 98.5% of sRGB, but isn’t quite good enough to accurately present colours for professional-grade work with photos and videos.

Maximum brightness is 390 nits, just 10 off the figure Huawei claims on its product sheet. This is bright enough for comfortable use outdoors, particularly as the glossy glass screen also has a reflection-reducing layer.

The Huawei MateBook X does support HDR video, but not HDR apps or games. And while the 60Hz refresh rate is standard, pixel response times are sound. I haven’t noticed any motion smearing or blur when playing games.

A 3:2 display may not be the perfect fit for video, but I think the MateBook X actually makes an excellent portable TV in a pinch, and it’s all down to the speakers.

This laptop has the kind of speaker power that belies its size, which you only usually see in MacBooks. Huawei packs a lot into the MateBook X. It sounds a bit like a small Bluetooth speaker, which is high praise for a slim laptop.

Performance – Decent speeds without a fan

The Huawei MateBook X is not intended to be a true performance laptop, but the hardware inside is solid.

You get an Intel Core i5-10210U, a quad-core chip with eight threads, 16GB DDR3 RAM and a 512GB SSD. Plenty of room, plenty of RAM and a CPU plenty of less weight-obsessed laptops use. The mid-range version of the Dell XPS 13 has the same processor.

Light work in industry standard applications like Adobe Photoshop is no problem at all. However, Huawei did make one bold decision with the MateBook X. It doesn’t have a fan, meaning all heat dispersal has to happen primarily through heatsinks, which is a slower process.

But how does this affect real-world performance? Laptops use something called thermal throttling to avoid overheating. This means the clock speed of the processor is reduced, to lower the heat created, when it gets warm.

I ran the Geekench 5 benchmark to see how long the Huawei MateBook X can hold onto its peak “turbo” performance. Its first result was 3185, fairly similar to what you’d see from a Dell XPS 13 with the same processor.

However, after that the MateBook X’s throttling kicks in, the score drops to 2915 and then further. 2478 was the lowest score recorded, 77% of the max. Passive cooling means you only get a few minutes’ worth of the Intel Core i5-10210U’s turbo mode.

What does this mean in practice? If you want to edit video, you’re much better off with a MacBook Air, which has bafflingly good performance for high-intensity tasks like this thanks to Apple’s new M1 processor.

It is no real issue for standard office-style jobs, though. Even when throttled the MateBook X runs Windows 10 smoothly. The SSD is fast too, with write speeds of 2983MB/s and writes of 3387MB/s.

There’s no separate graphics chipset here, you just get the Intel UHD graphics section of the Intel Core i5. It’s basic, and only really suitable for low-demand games, or older ones.

Under strain, the Huawei MateBook X makes no noise, because there’s no fan. Despite this, I’m impressed by how little the laptop heats up. Sure, the bottom gets warm but there were no red hot moments during testing. And, just as impressive, there are no major heat hotspots. Huawei’s engineers really seem to know what they are doing.

It lasts almost exactly seven and a half hours when streaming 1080p video at 150nits brightness. You don’t get all-day use, but we’re not miles off. That video streaming figure is about what you can expect if you write documents and check your email, but anything more taxing will reduce the battery life further.

Once again, I can’t help but avoid referencing the Apple MacBook Air here. It will last almost twice as long off a charge, thanks to Apple’s revolutionary M1 processor. 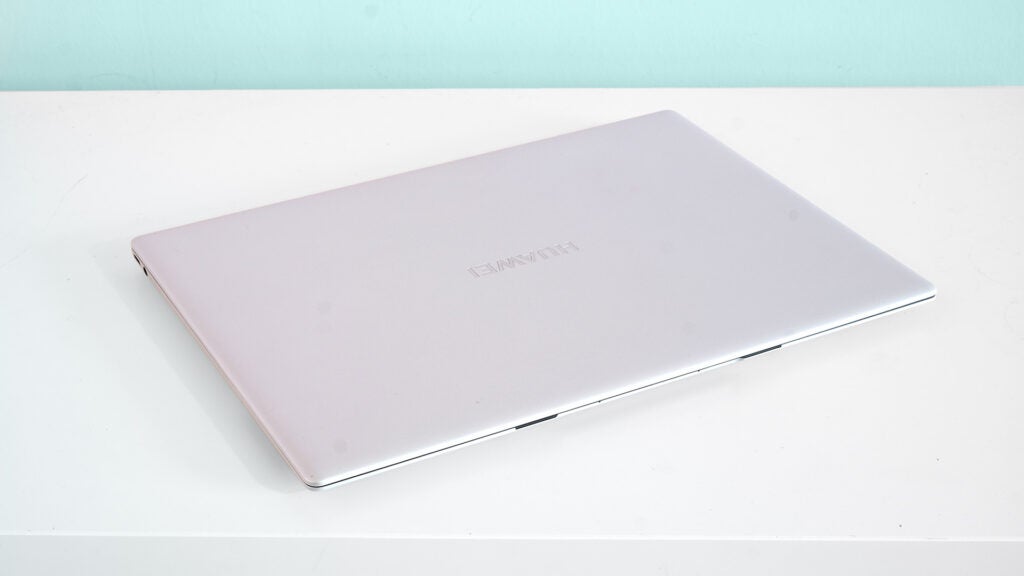 Sub-8-hour battery life is a hit to the MateBook X’s travel-ready cred. But what Huawei squeezes out of this form, with an Intel Core i5-series CPU, still seems fairly good.

The Huawei MateBook X’s power adapter is also quite small. It’s more like an oversize phone charger than a laptop brick, and uses a completely removable USB-C cable, making it easier to pack away.

You should buy the Huawei MateBook X if…

You shouldn’t buy the Huawei MateBook X if…