Is the Huawei MateBook 13 the ideal Windows alternative for those disappointed by the latest MacBook Air?

Huawei’s laptop division has launched a steady stream of surprise hits over the last few years. Whether it’s through sleek designs or inventive quirks (like hiding the camera inside a function key), the devices have easily matched the quality we’ve come to expect from Huawei’s excellent, award-winning phones.

In the US the MateBook 13 will retail for $999 and $1299 depending on which configuration you get. It’s been given an unspecified January release date. We’ll update this page when we know more about its UK price and other details. 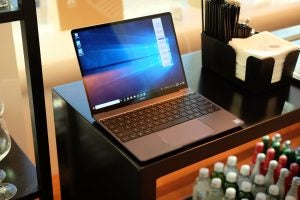 At CES 2019 in Las Vegas Huawei another Matemook to its laptop lineup, and it has the MacBook Air 2018 right in its sights.

During an early demo of the laptop, Huawei reps told me the MateBook 13 will sit between the flagship MateBook X Pro and the education-focussed MateBook D – offering a stylish, powerful package for a price that’s cheaper than Apple’s recently refreshed MacBook.

There will be two versions of the MateBook 13 available when it goes on sale: one that starts at $999, and another at $1299. I’ll get onto the specs shortly but whichever model you pick you’re getting a sleek, well designed laptop that certainly feels as nice as a pricier machine.

The aluminium body has a strong whiff of Apple about it, however it stands up on its own thanks to a nice sandblasted finish and either a silver or grey colour option. There are two USB-C ports, one on either side, along with a headphone jack. In the box Huawei includes a 65w USB-C fast charger than it says will fast charge the laptop and your phone. 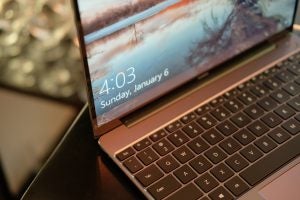 Pop open the display and you’ll find a 13-inch panel (in what Huawei calls a 12-inch laptop) with a minimal bezel running around the sides. This isn’t quite on the level of bezel reduction as the Huawei MateBook X Pro – that had a bezel so thin it needed to put the webcam into the keyboard – but it’s thin enough to give it that modern look.

The panel itself has a 3:2 aspect ratio and a 2160 x 1440 resolution, along with a perfectly fine 300 nits of brightness and touch support. The demo room I tested the laptop in wasn’t the best lit, but colours looked nice and viewing angles were good. That 3:2 aspect ratio does make it a little annoying for video though, giving you thick black bars either end of your content. At least your content should sound good though: Huawei has partnered again with Harman Kardon for the speakers and there’s support for Dolby Atmos too.

Below the display is a chiclet style keyboard with 1.2mm key travel and a really nice feel. As someone who is used to the Butterfly switches seen on the quite frankly awful MacBook Pro keyboard I immediately felt more comfortable typing on the MateBook. There’s enough space between keys and I didn’t find myself constantly hitting the wrong button. It’s got a backlight too and there’s a fingerprint sensor tucked below the power button. The large trackpad was equally impressive, reacting to my taps and swipes without lag or stutter. 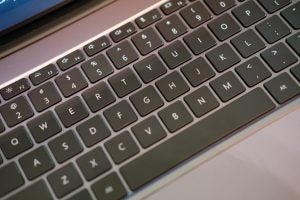 If you plump for the $999 model (there’s no UK or European pricing yet) you’ll get the silver model with an 8th Gen Intel Core i5, integrated graphics, 8GB RAM and a 256GB SSD. The $1299 option seems the more enticing though, upping that to an i7 processor with NVIDIA GeForce MX150 graphics and a 512GB SSD. Both feature the U series of Intel processors. Huawei is also including a year of Office 365 and a dongle in the box that gives you a USB type A port, HDMI, VGA and an extra type C port – a really nice touch. 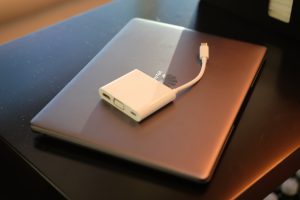 I didn’t spend long enough with the devices to judge performance, so that’ll have to wait for our full review. The same goes for battery life.

Huawei’s laptops have so far been great and this latest addition again looks rather impressive. the design is slick and the it feels like a small laptop that could happily replace a tablet in your bag and do a lot more.