Hands on with Huawei’s spec-packing, yet affordable, G8.

When a brand-new product gets announced with just a brief mention of the specs and not much else, I would normally assume that it wasn’t going to be much good. But that can’t be said for the Huawei G8.

Announced alongside the much more hyped Mate S at IFA 2015 in Berlin, the G8 is certainly less flashy than its Force Touch boasting brother, but it is by no means worth dismissing. It has a strong spec-sheet and should come in at a price-point that puts right in the firing line of the Moto X Play and the OnePlus Two.

Just like the Mate S, the G8 is built entirely from metal. And it looks good. The back has a nice feel about it and it is great to hold, though if I had one complaint it would be that it feels a little thick. It’s not, it’s just 7.5mm thick, but you definitely feel it when you hold it for an extended period of time. At 167g, this is quite a weighty device. 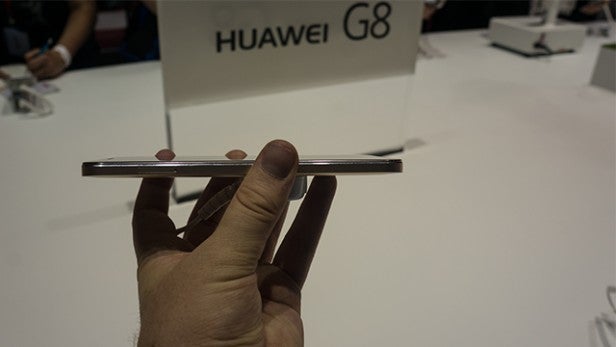 There’s also quite a lot of bezel action going on, especially around the top and bottom. I did notice it instantly, but it wasn’t something that would put me off picking one up.

As the Huawei G8 has 5.5-inch display, it’s certainly not going to be for everyone and it’s definitely a large device, but it doesn’t feel too big. 5.5-inches seem to be the default size for a display these days, so if you’ve had your hands around the Moto X Play then this isn’t a big size jump.

The screen itself is decent, but it is rather reflective. To be fair, the lights in the demo room were bright, so in normal conditions I’d expect it to perform much better. With a 1080p resolution and a ppi of 401, the panel is sharp, but colours seem a little oversaturated and even with the slider pushed up, it lacks brightness. But, this is a mid-range phone so I’m not fussing too much. 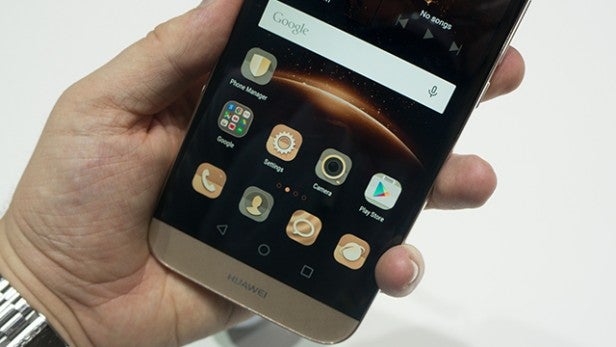 Two of the phones biggest tricks are on the back – the clever, incredibly accurate fingerprint sensor and a 13MP camera. I’m a big fan of fingerprint sensors on phones, it makes unlocking them simple and ensures you have an extra layer of security, without faffing with a pin code.

But, the sensor here has some extra tricks up its sleeve. A swipe down on it brings down the notification shade, while a quick flick across skips through photos in the gallery app. And because it’s not a button, you just rest your digit on it, rather than pressing down.

As I mentioned earlier, the 13-MP shooter on the back certainly packs the specs, especially at this price. Optical image stabilisation is included, and it shows with low-light snaps, with a dual-tone flash thrown in to complete the package. My few samples images came out packing plenty of details and colours looked accurate. On the front you’ve got a 5MP sensor to handle those selfles. 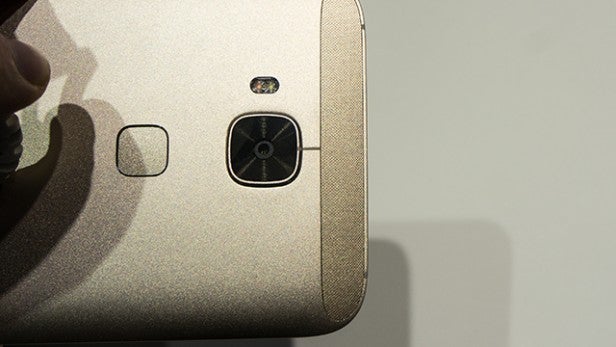 Powering the devices is a Snapdragon 616 processor, a somewhat surprising move from the Kirin chips Huawei normally uses, and a healthy 3GB RAM. The octa-core chip seems to handle things well, though I’d like to use it more before a final judgement on the performance. Muilt-tasking is smooth though, always a bonus.

As I highlighted in my Mate S hands-on, the main issue I have with Huawei’s devices is the overly colourful and transparent UI. EMUI, which runs on Android 5.1, is full of ugly icons, apps I don’t want installed and changes that take away from using an Android. There are strange quirks too, like the status not blending in with the app like it should.

Even though it got a matter of seconds of attention during its announcement, I quite like the G8. It’s a solid mid-range device with a fantastic fingerprint sensor, a feature packed camera and seemingly enough grunt under the hood to get the job done.

Would I pick one over the fantastic Moto X Play? I’m not so sure, but if a metal build is important too then you might be swayed. I’m interested to see how the battery copes, Huawei’s a day of full so i’ll be putting that to the test for the full review.