The Huawei FreeLace Pro is a decent step forward on the firm’s original neckband headphones and a solid choice for casual listeners given their low price. But, audio quality still isn’t good enough to keep discerning listeners happy.

The Huawei FreeLace Pro are the latest flagship wireless headphones from the tech giant behind some of 2020’s finest camera phones.

They differentiate themselves from the sea of other headphones from competing phone makers by sporting an atypical, neckband design.

From a distance they look like a very minor update on the distinctly mediocre original FreeLace earphones reviewed in 2019.

But under the hood Huawei’s made a number of subtle improvements that make the new Pro model a clear step up on their predecessor. Highlights include upgraded drivers, active noise cancellation (ANC) and battery improvements.

The only downside is that, despite offering stellar value for money, there are better sounding true-wireless sets around. This is a key factor that makes them a solid choice for casual listeners, but ill-suited for anyone with a trained ear.

The Huawei FreeLace Pro looks a lot like their predecessors at first glance. The buds have a collared cable design with a controller on the right and battery pack on the left. They also have the same atypical charging mechanism.

Detach the right earbud from the remote and the USB-C input is revealed. The idea is you charge the earphones using your phone and Huawei’s nifty “HiPair” tech, which reportedly lets you stack up 5 hours of listening off a 5 minute charge.

The feature works well enough and is one of many little touches that make the FreeLace Pro feel like a well designed product. The buds have a magnetic docking system that lets you lock them together when they’re not being used. 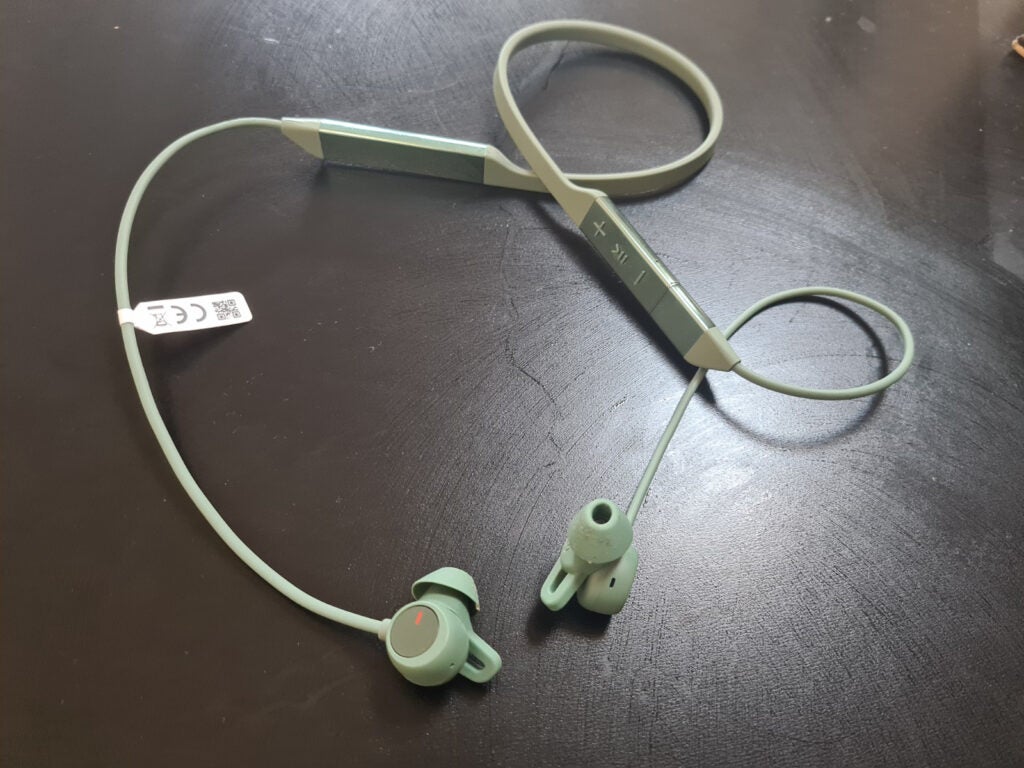 The nifty “smart switch” is also particularly handy. This is a cool option that lets you switch to the previous device the FreeLace Pro was paired with by double tapping the remote’s power button. This may sound small, but it’s a nice touch that made switching music source between my phone and smartwatch on the fly a hassle-free experience.

Build quality is also excellent, with the buds designed to be IP55 water resistant, which will be a boon for runners or gym goers. The only downside is that, despite coming with a solid set of wing tip options, it can be tricky to get a completely airtight seal with the FreeLace Pro. For general use the fit was solid, but during extended runs and workouts, like HIIT training, the seal would regularly break.

I’d also have liked Huawei to have included some way to tighten the cable length round the back, like you can on the Jaybird Tarah. Without it the collar band has a tendency to flail and move when working out, breaking your concentration and flow. Though being fair to Huawei, this is an issue I experience on most neckband earphones. I had the same problem with the competing Adidas RPD-01, which are bespoke sports headphones. 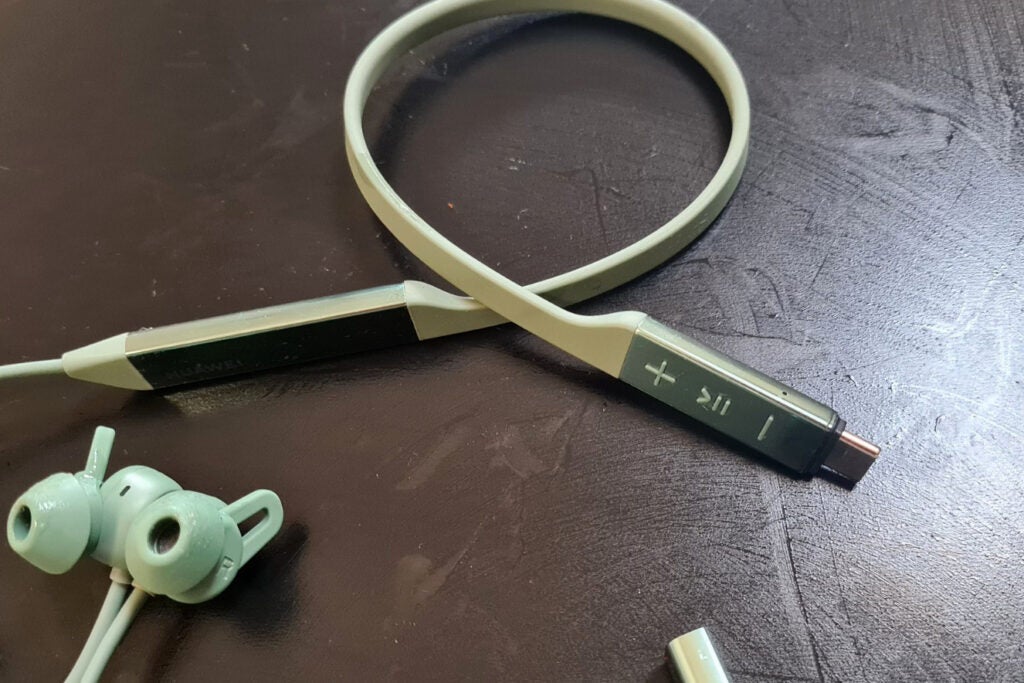 The addition of ANC, a new triple-mic noise cancellation system and larger drivers, rounds out the FreeLace Pro’s suite of upgrades.

The addition of ANC is a luxury that’s still not guaranteed on a set of earphones at this price. There’s no getting round the fact the ANC isn’t as powerful as more expensive true wireless sets like the Amps Air Plus and Cleer Audio Ally Plus. But they match, if not beat most similarly priced sets, like the Honor Magic.

The ANC is powerful enough to drown out the background noise of a road outside my flat’s balcony, which means it should be good enough to cut out distractions in most offices. A nifty ambient mode also makes it easy to stay safe when out and about. This is turned on/off by tapping the left bud. However it’s not effective enough to completely drown out background noise when travelling on a train.

Mic quality is excellent, however. The new triple mic noise cancelling tech produces stellar call quality throughout testing. Even in incredibly windy conditions the person on the other end of the line was able to hear what I was saying and vice versa. This is an achievement beyond most of the wireless headphones I test.

The only downside is that, despite all these perks, the FreeLace Pro still offers users average audio quality. The 14.2nm dynamic drivers are a massive step forward on the 9.2mm parts used in the original FreeLace and help the Pro variant offer significantly better dynamism. Sweeping ballads have more impact and post crescendos have a more noticeable swoop to them. 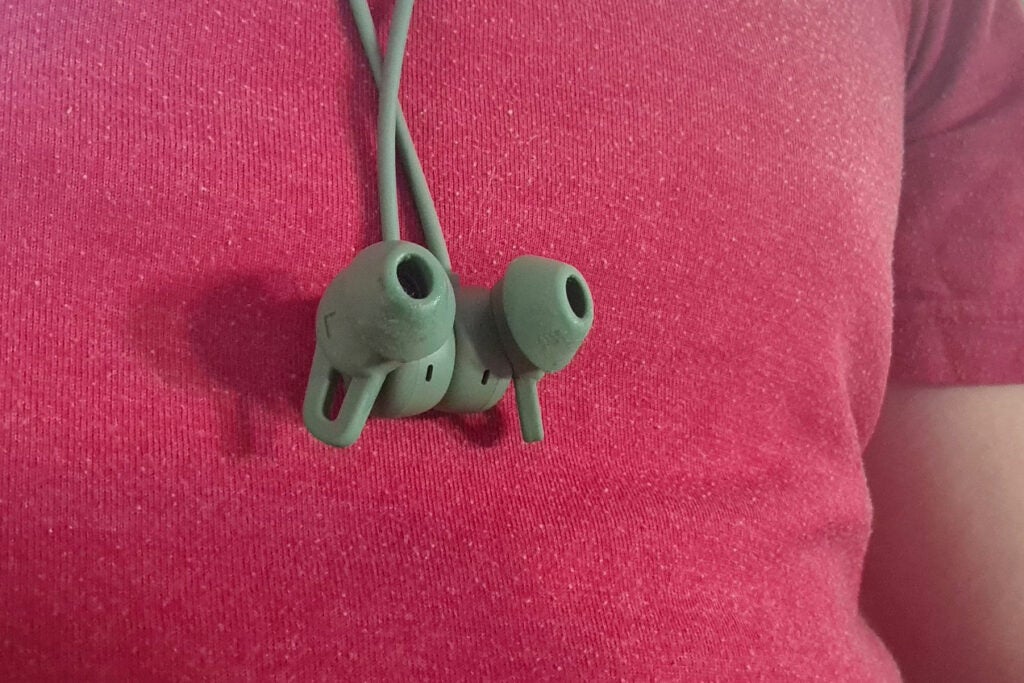 To casual listeners the bass is also suitably powerful and gives the Pro model a more vibrant sound. But there are issues with tonal balance and control.

Though it’s more powerful, and far from the worst I’ve tested, the low-end is a little flabby. This is particularly noticeable when listening to bass heavy genres like synthwave and blues. Sibilance can also creep into highs, giving attacking metal and punk tracks a slightly unpleasant sound, though thankfully these incidents aren’t uniform.

A few months ago I’d have forgiven this as at this price audio quality is always compromised and the FreeLace Pro are every bit as good as most competing neckband and sports sets, like the Adidas RPD-01. The only collar set I’ve tested to significantly beat the FreeLace Pro are the NuraLoop, which cost close to twice the price.

But there’s no getting round the fact you can get better sound true wireless sets these days. The Edifier TWS6 offers better, more balanced sound and comes with the added boon of aptX and AAC support, a feature missing on the FreeLace Pro, for example.

Battery life is an area the FreeLace Pro excels at, which is no surprise given the size of the earphones’ battery. The Pros are quoted as offering the same 16 hours listening with ANC on.

With real world testing, using the FreeLace Pro as my primary work and gym headphones I found the quoted life is accurate, so long as you don’t crank up the earphones volume. Listening to music for a few hours of the workday each week, and during my morning workout I easily got at least five days use out of them before needing a recharge.

Should you buy the Huawei FreeLace Pro?

If you’re a fan of neckband earphones and don’t have oodles of cash to spare, the Huawei FreeLace Pro are a solid option. They offer usable ANC, decent battery life and a wealth of smart features that differentiate them from the competition.

The only downside is that, despite positive work by Huawei, they still sound distinctly average. More serious music listeners will be better off investing in a more expensive set, or considering a better sounding true wireless set, like the Edifier TWS6.