The Huawei Band 3 Pro is one of the best-value fitness trackers around before you start digging into the world of little-known Chinese brands you’re unlikely to find on sale at many reputable retailers. It has a bold screen, simple interface and full GPS. Fitbit and Samsung don’t even offer these in bands for much less than £100. The Huawei Band 3 Pro does not handle notifications perfectly and needs more watch faces. But if you want to up your running or cycling game with some motivational metrics, this is one of the best deals going.

The Huawei Band 3 Pro is one of the best fitness trackers for the price. It is exceptional value compared to rivals from Fitbit and Samsung.

For £60 you get a colour OLED (organic light-emitting diode) screen, glass screen cover, part-metal case and full GPS. The Huawei Band 3 Pro is more capable than the Fitbit Inspire HR and Samsung Galaxy Fit. And both are significantly more expensive.

There must be a catch, right? Not really. The Huawei Band 3 Pro’s handling of notifications is basic but only marginally worse than that of the competition. We wouldn’t buy one for swim tracking, though. There is a dedicated swimming mode but the lack of physical buttons makes it seem like a poor fit for sport underwater. 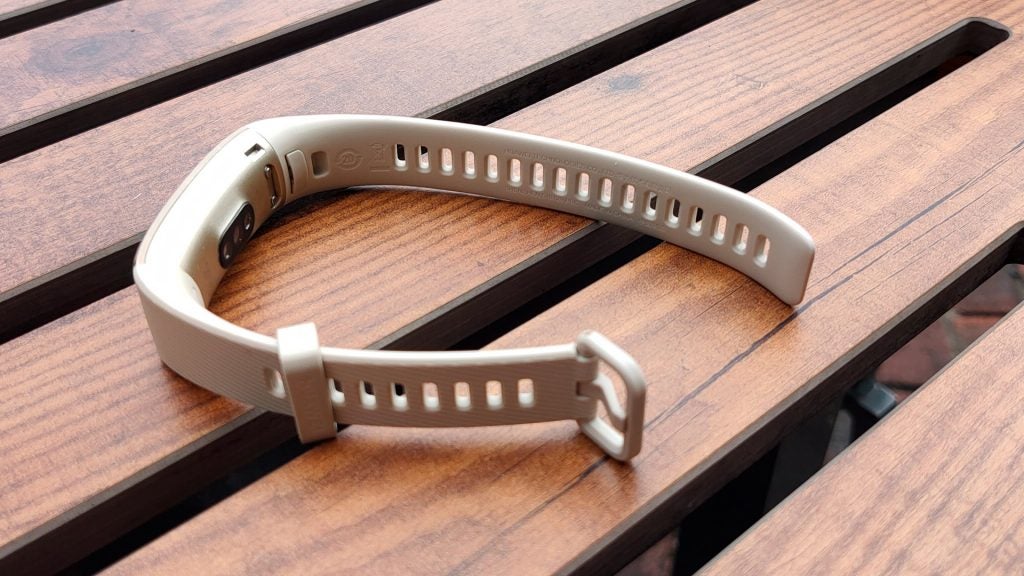 Huawei wearables, just like Huawei phones, often have a slightly lower-end Honor cousin. The Honor Band 4 is the Huawei Band 3 Pro’s, and the differences between them also tell you what’s special about this band.

The Honor Band 4 is smart and minimalist but Huawei’s Band 3 Pro is a little showier, and a little larger. Its screen has a glass top layer. A frame of brushed and bevelled aluminium sits around it. 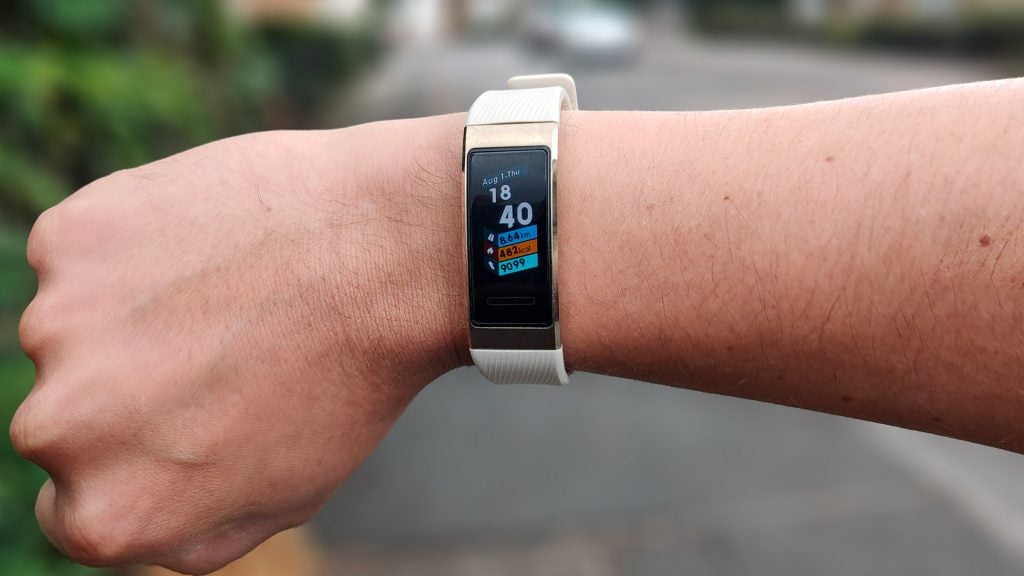 This gives the Huawei Band 3 Pro a jewellery-like quality. Gold gadgets are never my first choice but I’ve grown to appreciate the look over the weeks. It’s classier than most £50-odd wearables and there’s a black version too if gold isn’t your style.

A glass-covered screen should also give the Huawei Band 3 Pro a tougher face than most. But my time with it is a reminder toughened glass isn’t immune to damage. I’ve managed to give it a 3mm scratch. 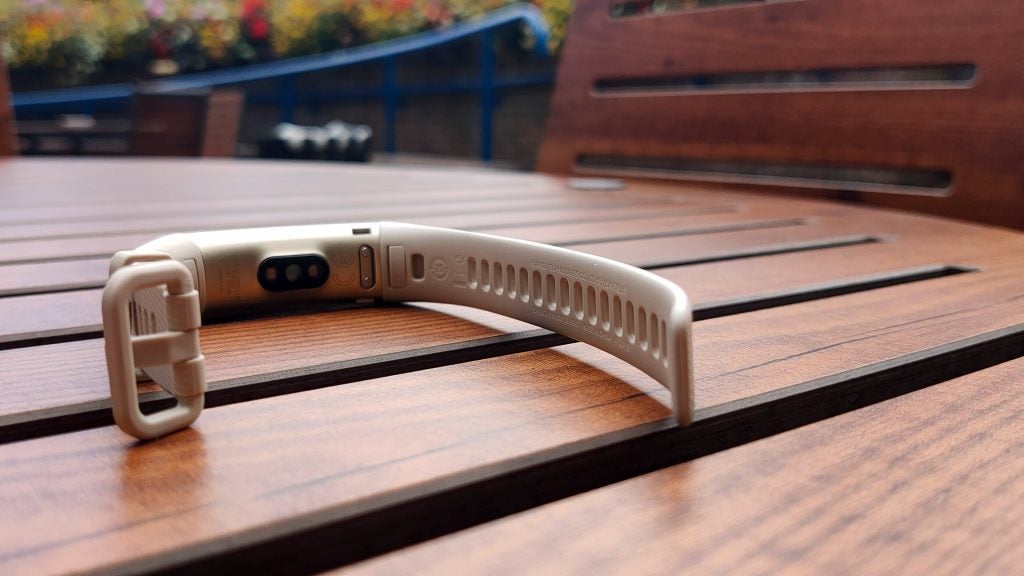 The Huawei Band 3 Pro is also ready for the swimming pool. It has 5ATM water resistance or 50-metre depth for ten minutes. In practical terms that means snorkelling is fine, diving is out. This is no longer anything special. Rivals have this “full” water resistance too.

Don’t go thinking this is an all-luxury wearable either. The Huawei Band 3 Pro’s metal surround is just a veneer on top of an otherwise plastic shell and the band is standard silicone.

Huawei uses a one-size-fits-all approach, with a watch-style strap that has 17 fit gradations. These little holes also function as ventilation but most users are likely to find a lot of spare strap left at the rear to be held down with the sport-style stay. Samsung’s Galaxy Fit includes two strap sizes and that would be handy here. But when we’re paying just over half the price, complaining too much seems almost ungrateful. 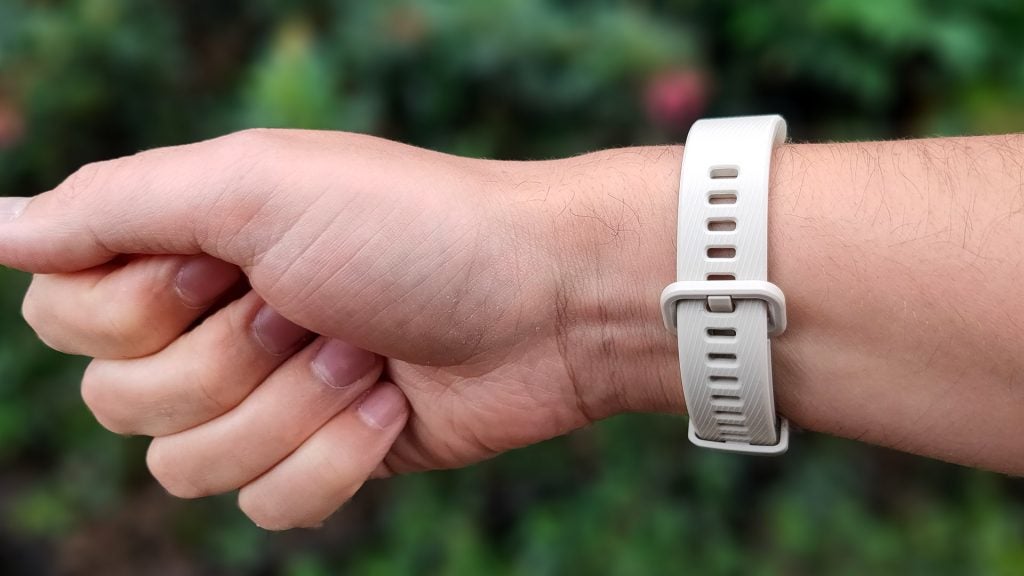 The Huawei Band 3 Pro is also simplified by its complete lack of buttons. It is controlled using the touchscreen and a touch panel below, which is probably just an extension of the same capacitive layer used by the display.

I have switched between several sub-£100 Fitbit and Samsung wearables over the past two months, and it has given me a renewed appreciation for the Huawei Band 3 Pro. This is simple software that doesn’t do a great deal. There’s no weather widget, no stress monitor, no guided breathing exercises. But the Huawei Band 3 Pro does feel responsive. Part of this is down to simple, solid speed. The way it reacts matters too. 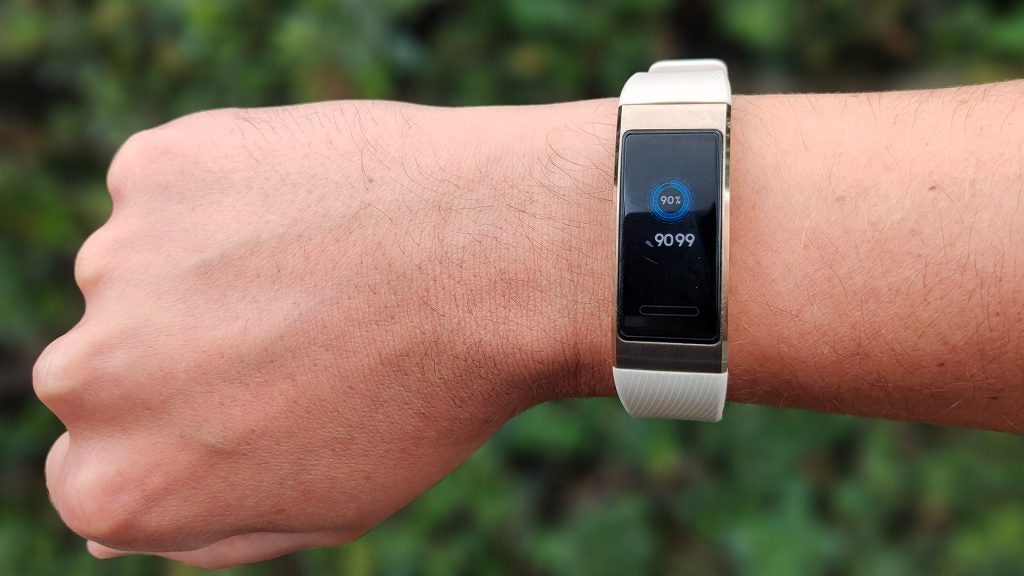 The interface is a series of pages, arranged vertically. They move along with your finger swipes rather than mechanically in one preset animation, for a feel that is a little closer to that of your phone, instead of an ultra-basic watch environment (which is what this really is).

Its screen is pleasant too. The Huawei Band 3 Pro has a 0.95-inch colour AMOLED (active-matrix organic light-emitting diodes) display of 120 x 240 pixels, just like the Samsung Galaxy Fit. Each interface page uses its own shade, for a colour-coded look. 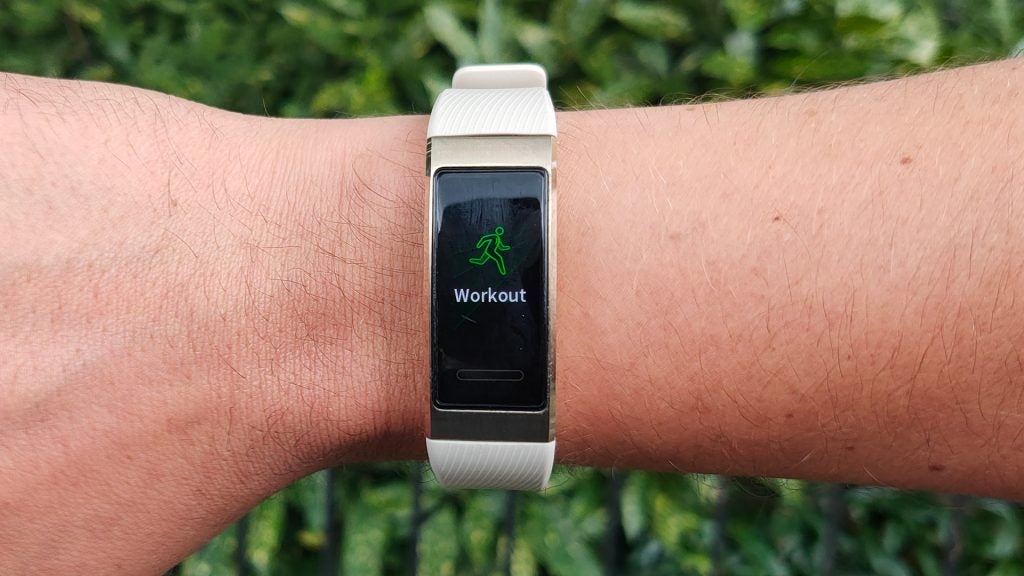 There are three brightness levels and the top one is easily powerful enough for bright days. As is the case for other bands in this class, you have to change the levels manually. This is a process Huawei could make quicker, as it makes you dig into the settings menu.

Frequent runners might as well keep it on the brightest setting. Thanks to the OLED display tech, the watch does not look glaringly bright at this level, as only the text and graphics are illuminated, as opposed to the whole screen.

Watch face selection is a weak point. There are just three to choose from, which is pretty pathetic. One is a classic analogue watch face. The other two have digital displays. All three are fairly well-designed and feature extra information like your step count and the date. But Huawei could have made a lot more of this screen. 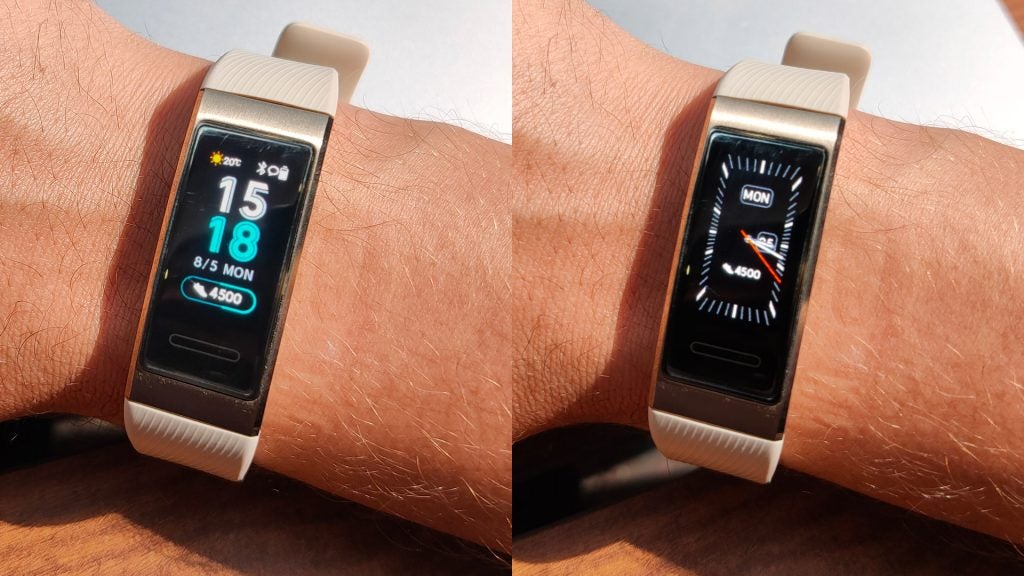 The Huawei Band 3 Pro may lack customisation but it does not miss out on fitness tracking tech. You get full GPS, which lets it track your runs and cycles fully without a phone.

If you don’t listen to music or podcasts while running, you only need to bring your house key. This makes the Huawei Band 3 Pro a much better serious exercise tracker than either the Samsung Galaxy Fit or the Fitbit Inspire HR.

The Fitbit has to be connected to your phone to map runs and the Samsung only uses its accelerometer. That means no mapping and, in the Fit’s case, pretty poor distance estimates. 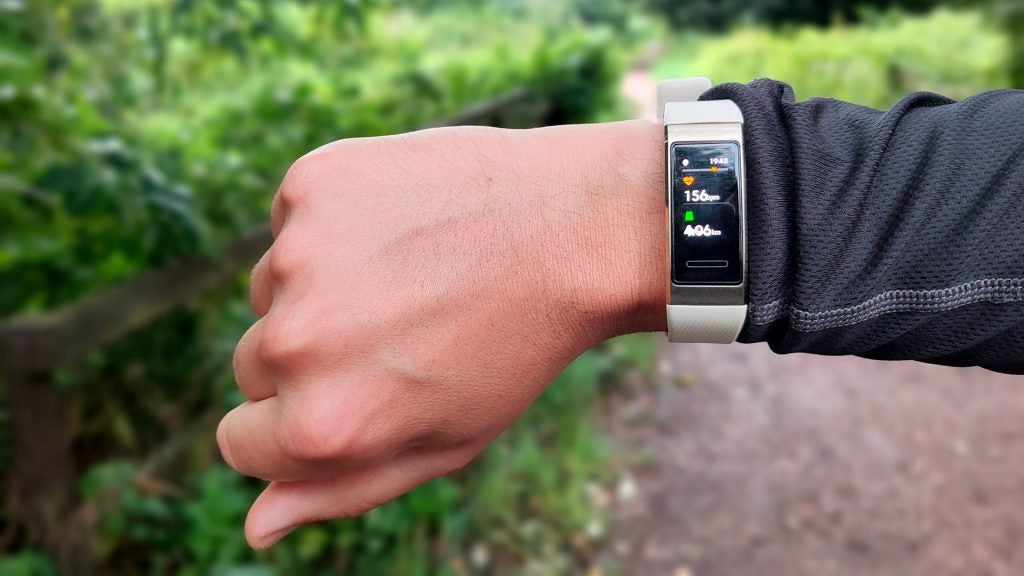 Huawei even tries to get close to the experience offered by a Garmin watch. When you go for, say, a 5K run, the Huawei Band 3 Pro displays a “performance indicator” stat as you run, which tells you how today’s performance compares to your current baseline.

If you research online, you may see some reports that the heart rate sensor “misses” chunks of data, showing heart rate levels that just don’t map with exertion. However, Huawei seems to have fixed this, as the graphs I see now are consistent with cadence and largely accurate. 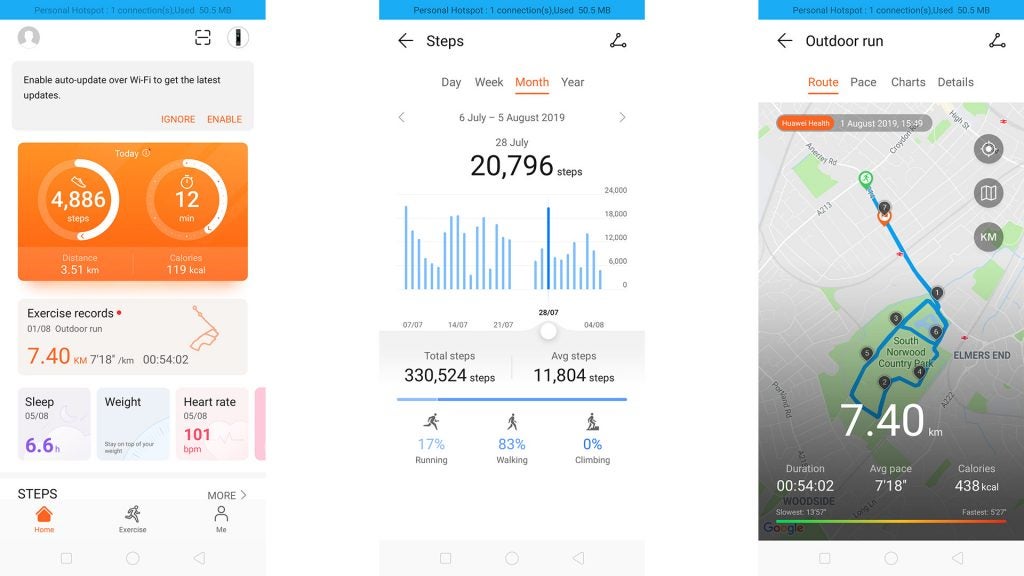 Like a lot of wrist-worn sensors, the Huawei Band 3 Pro may not react to heart rate leaps as quickly as a chest strap, but it compares very well with the competition. Huawei is also much more confident than any of the other big names in the way it relays data in the Huawei Health mobile app.

Rather than producing a smoothed-out graph of readings, Health lets you see discrete heart rate results for each second of your runs or cycles. Once again, this is more like Garmin’s approach than Fitbit’s. I can’t say I make great use of this fine-grain information, but I am a fan. There’s no attempt to hide flaws in the sensor or software with “averaged out” results.

For a £60 fitness band, the Huawei Band 3 Pro is surprisingly hardcore, if you want it to be. 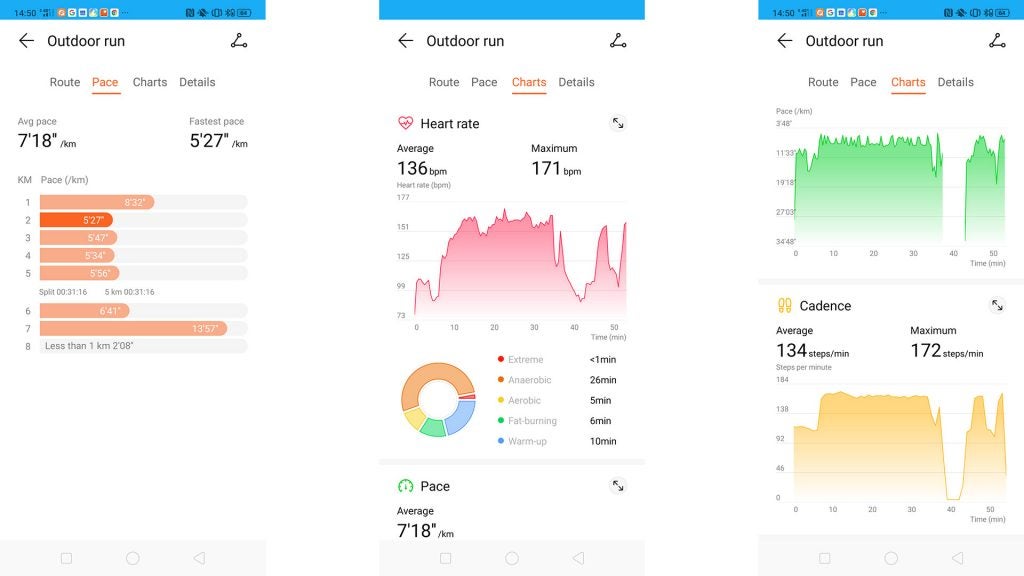 The big caveat is one I have already mentioned. There’s a swimming mode that claims to be able to tell between different stroke types, and, like most, can tell when you complete a lap. However, as all the inputs are based on capacitive “buttons”, you can only really stop the tracking when you’ve left the pool and given the display a thorough shake-off. This is where a physical button is handy. 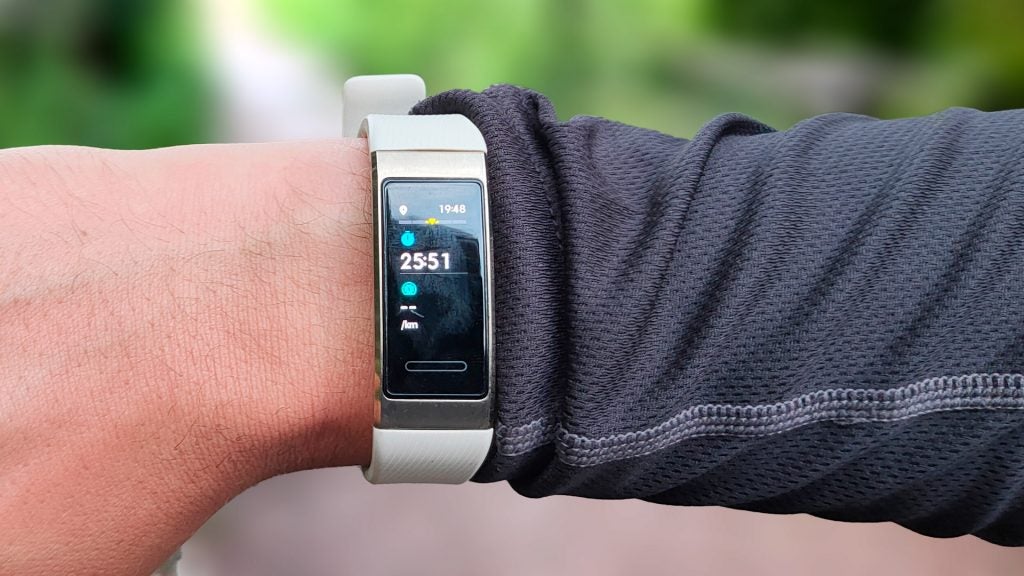 Notifications are the Huawei Band 3 Pro’s other big weakness. The most important basics are here. It can receive message alerts and random notification fluff from any apps you choose but the way it displays them is relatively awkward and clunky.

The Samsung Galaxy Fit and Fitbit Inspire HR both feel more comfortable with notifications. I still find the Huawei Band 3 Pro useful for a quick glance at a WhatsApp message when walking around but you can’t reply on the Band. Looking through several messages is a bit like rifling through a pile of Post-it notes left by a disorganised housemate or partner. 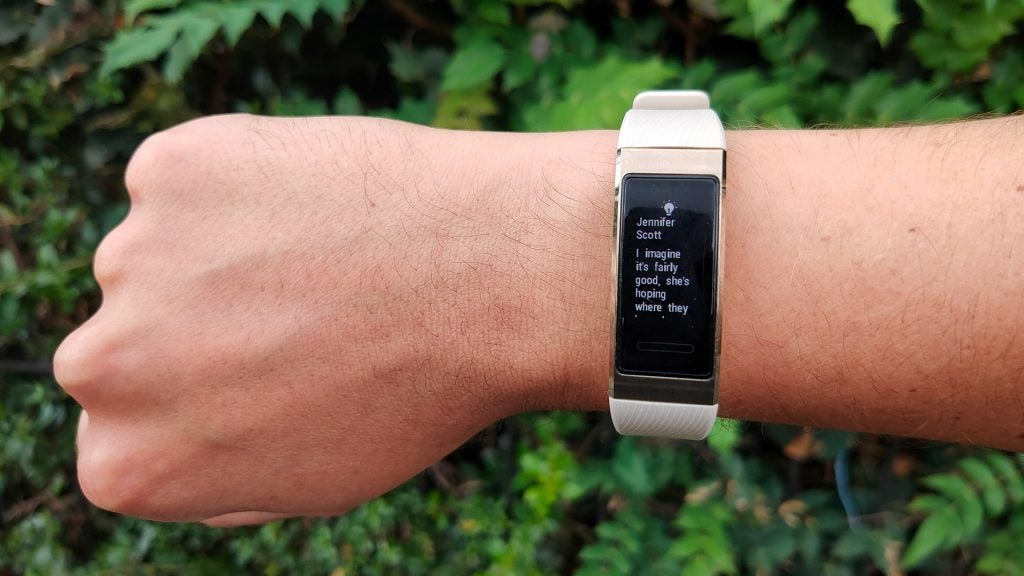 As someone who tends to run regularly rather than swim, I found that notifications are the one significant issue of the Huawei Band 3 Pro.

The tracker does have a few extra features but they are nudged into the system rather than upfront on the top layer of the Huawei Band 3 Pro. There’s a stopwatch, a timer and you can use the Band to find your phone. Pressing the “find phone” option sets off an alert on your paired device.

This gadget tracks sleep too. Huawei embellishes the feature with a load of advice and “TruSleep”, which uses the heart rate tracker for better results, separating the night into light sleep, REM and deep sleep periods. It also rates your breathing quality.

It pulls a lot of visual information out of relatively little tracked data. However, it does at least contextualise it, letting you know if the consistency and quality of your sleep is below average. 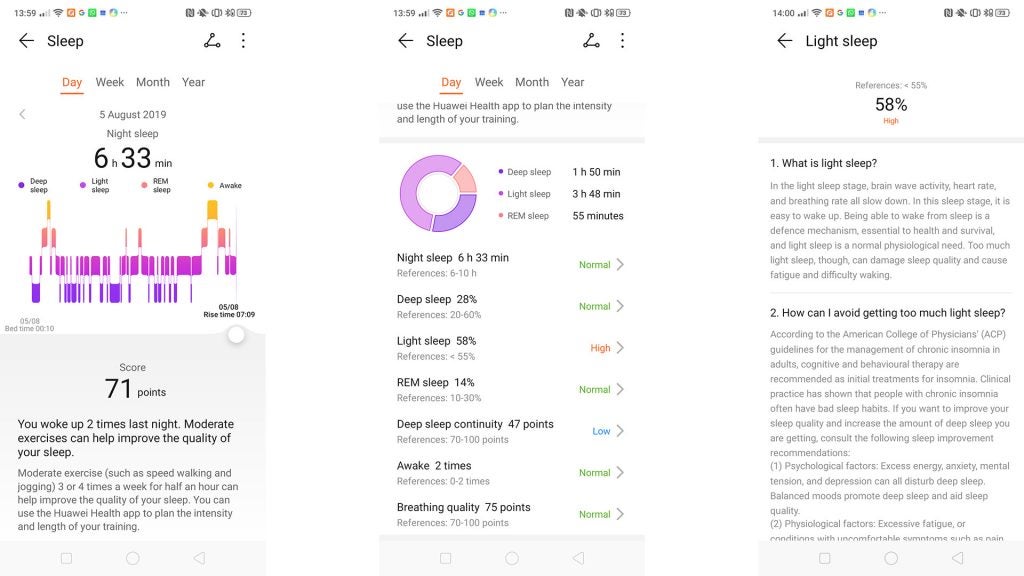 The Huawei Band 3 Pro has a 100mAh battery, 20mAh less than the Samsung Galaxy Fit. Fitbit doesn’t talk about the capacity of the Inspire HR but its capacity is likely to be similar.

You’d expect these wearables to last a similar amount of time off a charge, but they don’t.

The Huawei lasts for ages, far longer than the other two. Huawei says it can go for up to three weeks without a recharge. I’ve seen it last a full week with notifications, constant heart rate measurement and a couple of GPS-tracked exercise sessions.

That last one is the real power suck. The Huawei Band 3 Pro lasts for up to seven hours of GPS, which is similar to some entry-level GPS running watches. 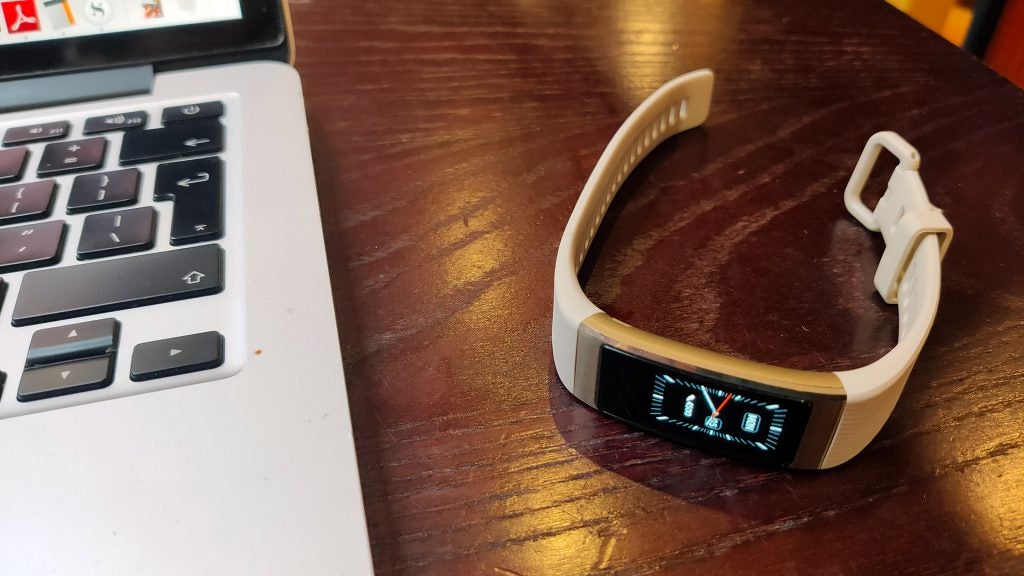 Should I buy the Huawei Band 3 Pro?

The Huawei Band 3 Pro is one of the best-value fitness trackers around before you start digging into the world of little-known Chinese brands you’re unlikely to find on sale at many reputable retailers.

It has a bold screen, simple interface and full GPS. Fitbit and Samsung don’t even offer these in bands for much less than £100.

The Huawei Band 3 Pro does not handle notifications perfectly and needs more watch faces. But if you want to up your running or cycling game with some motivational metrics, this is one of the best deals going.