The G6 runs on Android 4.3 Jelly Bean with Huawei’s Emotion 2.0 Lite running on top. This means that there’s no app drawer, like the one you find on an Android phone running custom-free version of Google mobile operating system. Instead, Emotion 2.0 Lite re-creates the iOS experience in keeping all apps on the main homescreens.

There are four homescreens in total to start with, one of which is plastered with some not very useful widgets and another where you’ll find folders named Tools, Google Apps and Top Apps. The latter includes Facebook, Twitter and Kingsoft Office. Fortunately, there’s very little in the way of bloatware. Huawei does include native applications for music, time, email and calendars, but you are going to replace these with Google’s own app or third-party ones from the Google Play Store.

One native app that does stand out is the Phone Manager, which scans the phone and will tell you if there’s trash you can delete or quickly view how many apps are running. It’s a handy way to monitor and quickly view what’s soaking up the battery life and will hopefully help keep the phone more secure. 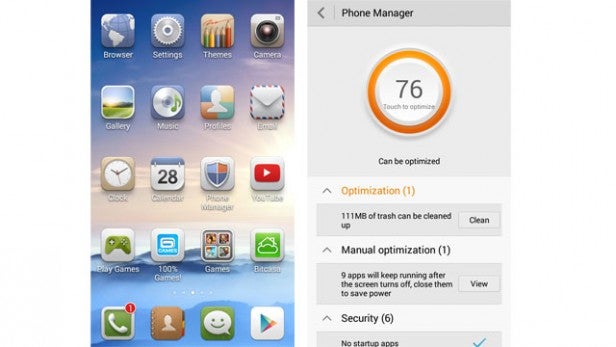 There’s 8GB of built-in storage, but after the apps and the OS only 4GB if free so the microSD card slot hidden behind the removable cover is going to be valuable if you like downloading big games or storing music locally.

Moving everything to the homescreens means it’s very iPhone-like as an interface. The more colourful, playful approach won’t be to everyone’s taste, but Huawei tries to address with themes to change the appearance.

There’s four already pre-installed on the phone and there’s more online, though just like the Ascend P7 it’s not particularly clear how to locate them. The ones you do have to pick from are not that much different from eachother and still make the interface look a little childish. 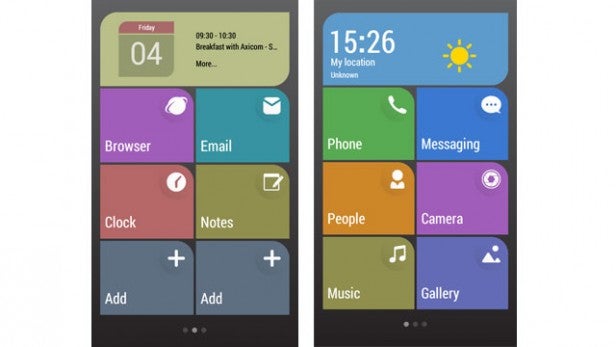 Pressing down anywhere on the homescreen launches a window where you can make further adjustments, including screen transitions and a simplified user interface that swaps the icons for Windows-style tiles. This is actually a more attractive interface and we’d happily swap this for any of the themed interfaces.

Navigating and generally getting around is at least a clean and swift experience, although apart from when you get typing on the keyboard. Despite hosting sizeable keys the frustration of hitting the wrong keys was a constant issue whether predictive text or standard typing mode is activated.

The G6 is powered by an Snapdragon 400 1.2GHZ quad-core processor with 1GB of RAM to help take care of multitasking giving it undeniably mid-range phone credentials, the same processor as in the Moto G. Like the Motorola phone this is more than capable of keeping things running smooth.

Switching homescreens is nice and quick and appllications don’t take an age to launch. Graphically, games like Real Racing 3 run without any hitches, so gaming should be no problem here either.

Even the 1GB of RAM doesn’t appear to have an adverse effect on running multiple apps and scoring a 1155 multi core score in Geekbench 3  it matches the Moto G (1155) and beats the the Xperia M2 (1061), which runs on the same Snapdragon 400 CPU. Huawei has managed to get the right amount of power under the hood for this £200 smartphone.