The Huawei G300 is offered at an extremely attractive in price. With Android smartphone prices dropping through the floor recently, with some handsets available for as little as £40 on Pay as You Go it’s sometimes hard to gauge why one is better than another. However, these cheaper android phones often have very low resolution screens or wheezing processors that lead to sluggish performance. The Huawei G300 is an altogether better compromise. It’s still very affordable, but has a large 4in screen and a decent 1GHz processor. Currently this phone is available exclusively on Vodafone for £100, plus a £10 top up, or for £199.99 Sim Free, so can it challenge the likes of the Orange San Francisco II as the budget smartphone to beat? 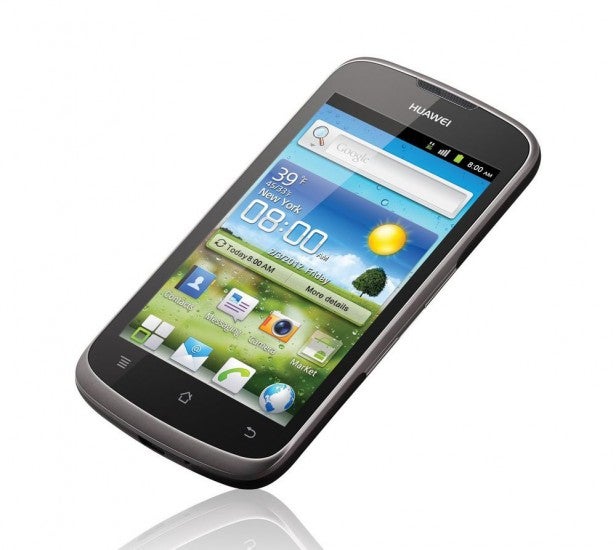 The Huawei G300 manages to avoid some of the pitfalls of a lot of budget phones. Firstly its build quality is actually quite good and sturdy. It doesn’t feel like a cheap handset, but rather gives off quite a solid and robust impression when you hold it.

Secondly, the design avoids looking dated and is quite easy on the eye. Although the case initially appears to be made from metal, it turns out that this is just plastic with a metallic coating. Nevertheless, it looks convincing and contrasts quite nicely with the glossy white plastic edges at the top and bottom of the handset. The corners are rounded too, which helps it sit more comfortably in your hand than phones that have more angular styling, such as the iPhone 4S. 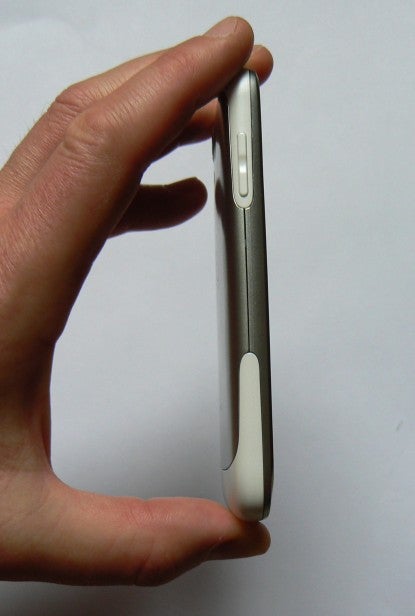 Naturally the front of the Huawei G300 is mostly taken up by the large-ish 4in screen, but at the bottom there are also touch buttons for the option, home and back functions. These are backlit too, which is handy when you’re using the phone at night. Hardware buttons have been kept to a minimum – there’s just a power/lock switch at the top as well as a volume rocker button on the left hand edge – and the placement of the headphone jack at the top and microUSB port at the bottom may be pretty traditional, but it’s just how we like it.  Thankfully, there’s a removable battery that sits behind the snap off cover on the rear and when the cover is removed you can also easily get at the microUSB card slot. 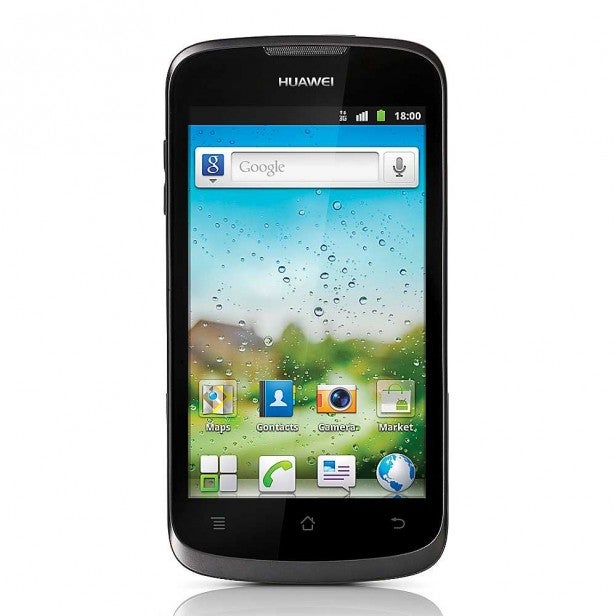 The rear of the phone is also home to the 5-megapixel camera. There’s no front facing camera either, so you can’t use the handset for video calling in apps like Skype, which is a bit of a shame, but understandable given its modest asking price. There’s relatively little shutter lag when firing off snaps and the autofocus is pretty quick too. Snaps in good lighting conditions tend to look better than you might expect from a budget blower, as they have strong levels of detail and sharp edges.

However as light decreases so does its performance, with a lot of noise creeping into shots. It also doesn’t handle shadow detail very well. You can call the LED flash in to play to help it out when you’re shooting in low light, to help improve things.

The Huawei Ascend G300 is built around a single core 1GHz processor and has 512MB of RAM. There’s also 4GB of ROM, although only around 2.4GB of this is available for storing apps and your own data such as photos and videos. Nevertheless, it does have a microSD card slot that accepts cards of up to 32GB in size, so for a fairly modest additional outlay you can have quite a lot of storage space to hand. 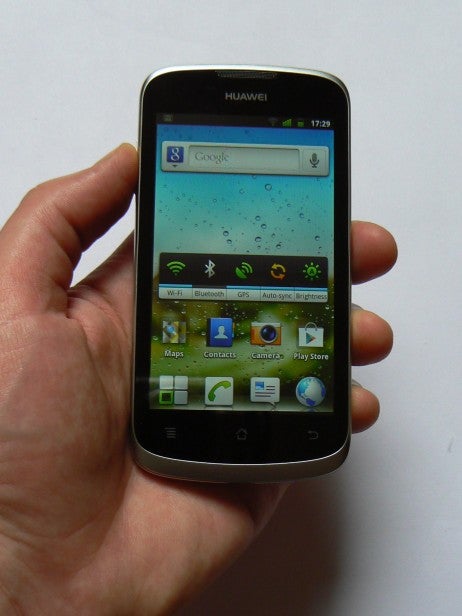 On the whole the phone performs pretty well. It’s obviously not as speedy as today’s high-end dual and quad-core phones, but apps load relatively quickly, scrolling is smooth and on most sites the browser feel reasonably nippy. That said, it does take a while to render more complicated websites and scrolling can become choppy on image-heavy sites.

Also, 3D games tend to tax its hardware to the limits and although standard definition video plays fine, it struggles with 720p HD video files. These issues were reflected in its benchmark results. In BrowserMark it posted a score of 66424, while in SunSpider it managed to reach 3270 – a fair bit behind the likes of the iPhone 4S and Galaxy Nexus, but at the same time way ahead of the Orange San Francisco II.

The limits of the single-core processor showed though in the Linpack test where it posted a score of 9.57 miliseconds and in the GL Benchmark standard Egyptian test, which is a good indicator of 3D gaming performance, it only managed 20frames per second. Nevertheless, for a phone that costs £100, these results are still very impressive and put it at the head of the budget smartphone pack. 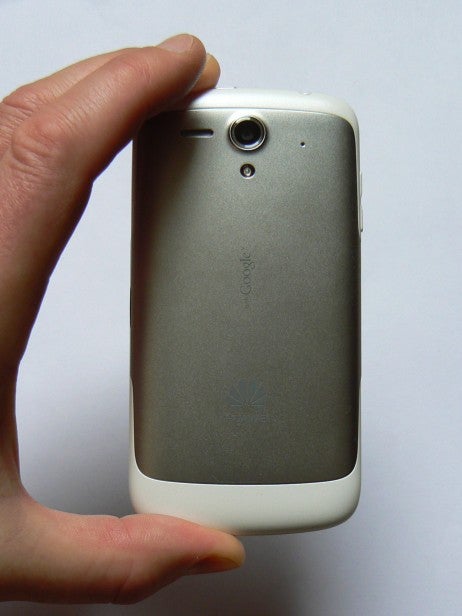 Undoubtedly the best thing about the Huawei G300 is its screen. At 4in it’s nice and large, but also has a decent resolution of 480 x 800 pixels, so text, graphics, videos and snaps still look very sharp and detailed. It produces vivid, yet natural colours, and while it could have a touch more brightness – especially when you’re using it outdoors – it’s still miles better than most of the screens we’ve seen on most budget Android phones.

On the operating system side, the G300 comes loaded with Android 2.3 Gingerbread. Huawei has added its own skin over the top, but the changes are relatively minor, which is no bad thing in our book. There are five homescreens by default, on to which you can add widgets and shortcuts.

There’s also a customisable shortcut bar at the bottom of the screen. This has one immovable icon that takes you to the apps drawer, with the other three set to take you to the SMS, dialer and browser, although you can edit these last three to launch pretty much anything you choose.

Huawei has changed the lock screen too.  It has a circle in the middle with four functions dotted around it for unlock, SMS, camera and call log. You drag the lock button to one of these icons to launch that function.  It’s a pretty neat and useful feature and similar to the lock screen on the Ice Cream Sandwich (ICS) version of Android. Speaking of which, Huawei says that it will release an update to ICS for the phone later in the summer. 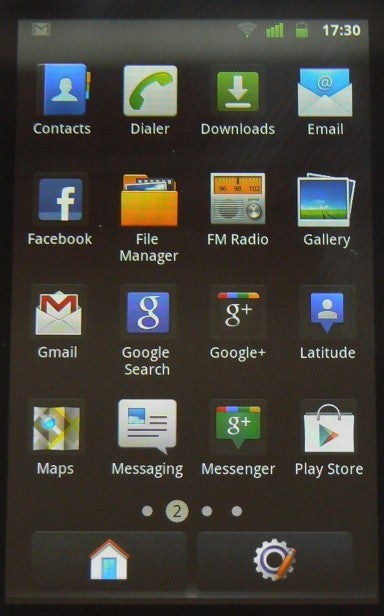 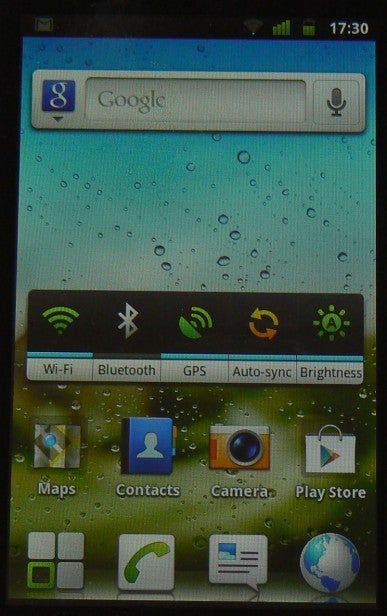 Early versions of this phone had a bug in the firmware that caused the volume to stick at a very low level. However, Huawei has now fixed this and we didn’t experience any problems with it. It’s not the best phone we’ve ever used in terms of call quality, as the earpiece could do with a tad more clarity, but it’s far from the worst either and we don’t think most people will have a big problem with it.

The Huawei G300 relies on a removable 1,500mAh battery for its power and its battery life actually isn’t bad. It’ll easily last a day before needing a recharge, which is more than can be said for a lot of budget Android handsets.

The Huawei G300 is an easy phone to like. It has a smart and robust design, good battery life, a great screen and punches above its weight in the budget phone performance stake. In short, we think that at £100 on PAYG it represents a total bargain and is even better value for money than the likes of the Orange San Francisco II. 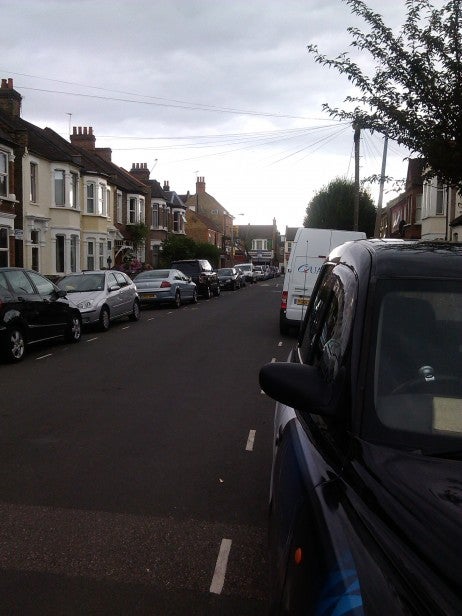 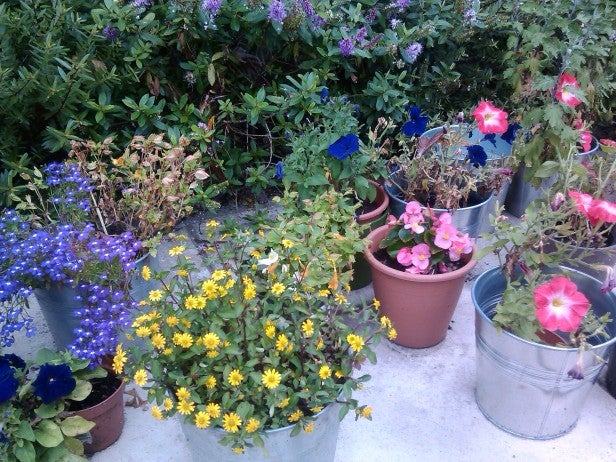 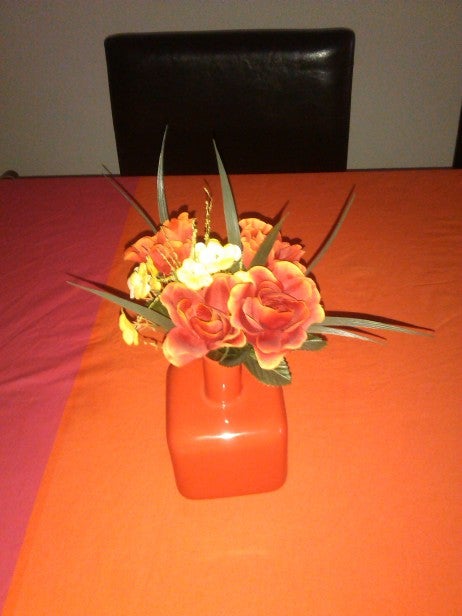