The Huawei Ascend D2 runs Android Jelly Bean at its core, and on top sits the Emotion UI. This adds a bunch of minor additional features to Android, such as Face Recognition in the gallery app, but also fundamentally changes the way the OS is arranged.

Rather than maintaining the two-part structure, of home screens and the apps menu, all the phone’s features are bunged into non-deletable folders on one of the Huawei Ascend D2’s home screens. In a very basic sense, it’s a half-way house between iOS and Android. However, it’s something that may initially confuse long-term Android users. 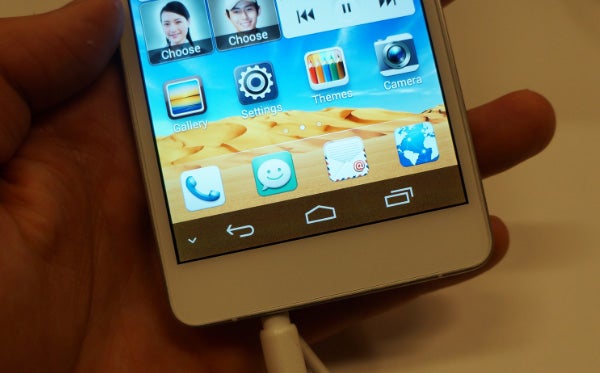 There are a few instances of this playing fast and loose with the rules of Android. For example. You can flick away the Android Jelly Bean nav bar, and once it’s hidden it’s not entirely clear how you should navigate (remember, there are no hardware soft keys). This feature is there presumably to show off the impressive 5-inch screen as much as possible

It is right to show off the Ascend D2’s screen too – it’s mightily impressive. Five inches across and Full-HD resolution, its specs match the very best phones announced. It uses a variant of IPS technology rather than AMOLED, and is both dazzlingly bright and flawlessly sharp. 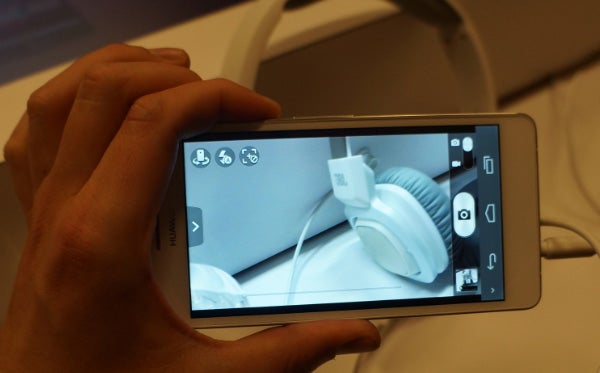 The only argument that can be made against the Huawei Ascend D2’s screen is that its resolution is well into diminishing returns. Huawei’s Richard Yu admits he can’t tell between a 300-odd dpi screen and the 443dpi of the Ascend, and we’re hitting the wall of meaningful progress at this point. There’s work to be done on contrast and screen reflectivity still, but the phone performs well on these fronts too.

The impressive-sounding specs continue with the Huawei Ascend D2’s cameras. There are two of them, the main rear one using a 13.-megapixel sensor, wide f/2.2 aperture and a single-LED flash. 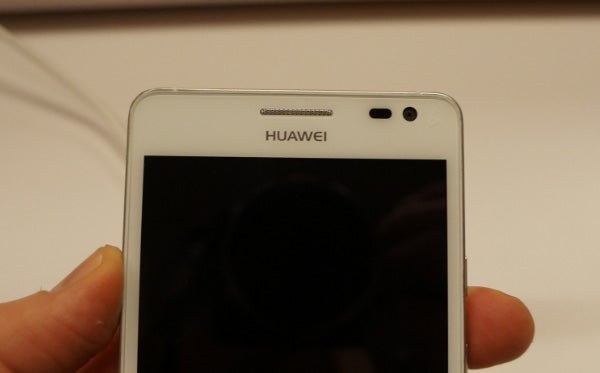 We didn’t get to assess the image quality of the shots, but there’s little of the shutter lag seen in the last Huawei phone we reviewed, the budget Huawei Ascend G330. Focusing speed and shutter times weren’t quite a match for the iPhone 5’s, but that could have been down in part to the lighting of the environment. We’ll be back with the full conclusion in our review.

Topping off the impressive feature list for the Huawei Ascend D2 is battery. It has a 3000mAh battery, significantly larger than the Samsung Galaxy S3‘s 2100mAh unit – without an immediately noticeable weight sacrifice too.

Huawei says that the phone will last for a solid two days thanks to a combination of this generous capacity and power management optimisations. To top it off Huawei claims the Ascend D2 charges 25 per cent more quickly than the Samsung Galaxy S3. With the scent of fierce competition in the air, we’ll wait until we get our review handset in before coming to any conclusions.

Can the Huawei Ascend D2 really compete with the Samsung Galaxy S4? Commercially at least, it seems unlikely. Without Samsung’s brand cache and with those lingering ties in the minds of many to the brand’s budget origins, the phone may struggle if priced anything less than extremely aggressively. We’re also not convinced all of its UI tweaks will be considered bonuses by everyone. However, that does not mean Huawei has produced anything less than an excellent phone in the Ascend D2, even if it doesn’t have its own personality to speak of.