An Alexa-powered smart speaker and 4G wireless router all-in-one, the Huawei AI Cube appears to be a versatile device that can do plenty while replacing your fixed-line broadband. Sadly, the experience doesn't match up to the promise. Relatively poor sound quality, a comparatively high price, and the lack of many features present on Amazon Echo devices detract heavily. Available on the Three network, broadband performance also varies depending on location.

What is the Huawei AI Cube?

The Huawei AI Cube is an unusual hybrid. It’s a smart speaker with Amazon Alexa, similar to an Echo, but it’s also a 4G router. It takes a mobile internet signal, just like that of your phone, and broadcasts it through your home. Up to 64 devices can connect concurrently, making it a feasible alternative to standard home broadband; no more phone line required.

The Huawei AI Cube is full of promise, but we’d suggest you manage your expectations. 4G speeds still vary hugely from place to place, and it’s only a “passable” smart speaker. Sound quality isn’t close to matching the Sonos One, and Spotify support is included at the time of review.

However, if 4G speeds are good in your home and you find a competitive data plan, the AI Cube lets you take a completely different approach to connecting your home. In south east London in mid-late 2019? We’re not convinced just now. 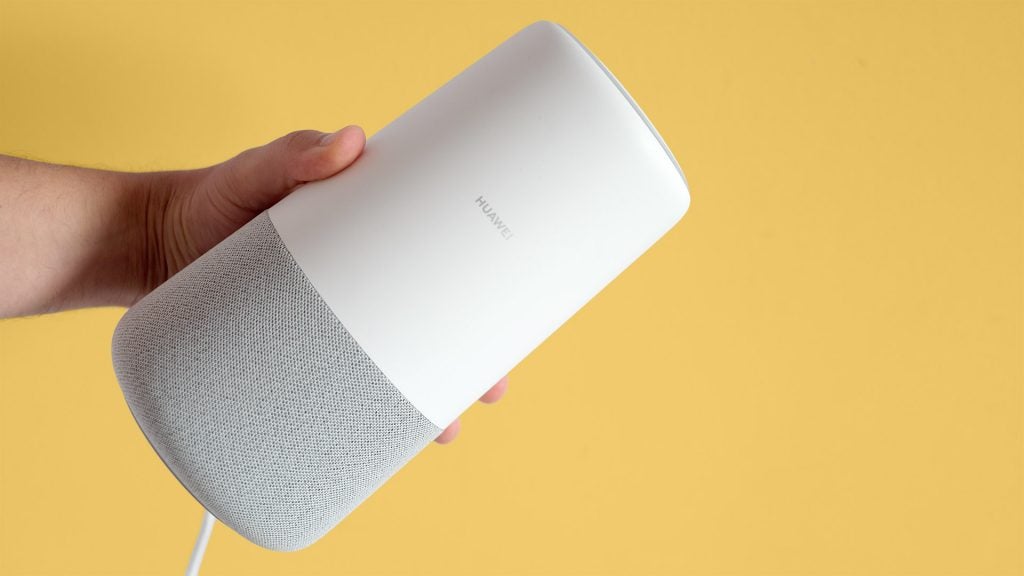 Huawei AI Cube – It can get the best out of 4G, but location is important

If you’re reading this from the UK, you likely have stumbled on the Huawei AI Cube through Three. The network provides the smart speaker as part of its 4G home internet service.

You can use a SIM card and the Huawei AI Cube as a replacement for traditional home broadband thanks to Three’s more-than-reasonable data plans. You can currently sign up for “unlimited” data at £26 a month, with the first six months are charged at half price.

But should you take up the offer? It’s a question I’ve asked myself recently. Virgin Media has a monopoly on fast internet in my area, but seems to consider regular price increases a fun hobby.

Three HomeFi isn’t a perfect solution for south east London yet. The speeds I see are invariably slower than traditional home broadband, by a huge margin, and less consistent. 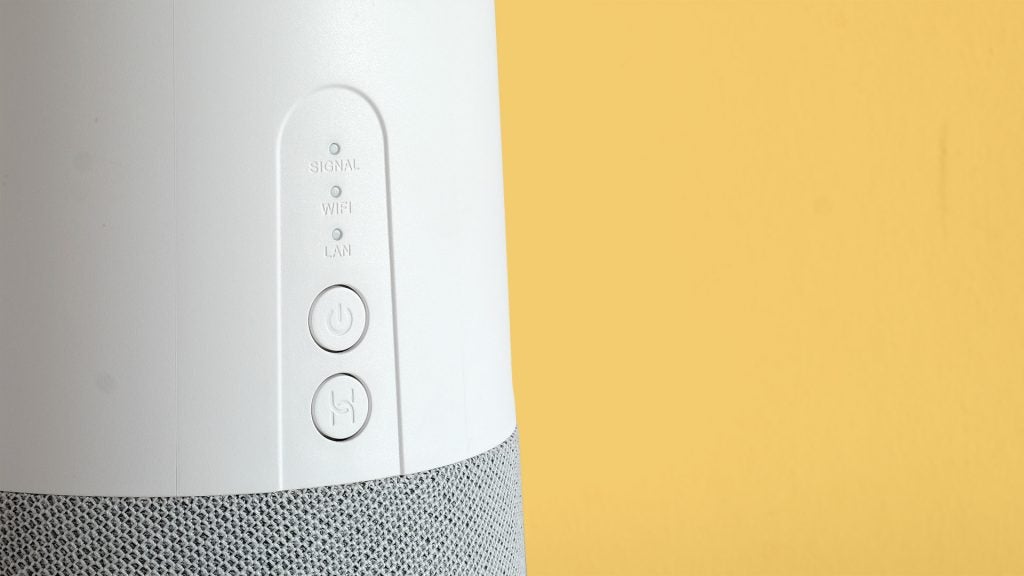 The fastest recorded speed was 8.2Mbps, after using the companion Huawei HiLink phone app, which has a handy signal strength meter to find the area of strongest signal in the home. Speeds tested throughout the days dropped below 1Mbps at times, tending to hover around 2-3Mbps.

Three also provides my phone service, so I had an opportunity to compare the results. The Huawei AI Cube tends to provide slightly faster speeds than the phone, but this isn’t always the case since they’re quite unpredictable.

This is only really proof of how much 4G speed relies on geography. I regularly hit 30/40Mb speeds when out in the world, downloading podcasts on my phone. If you have an unlocked phone then it may be worth trying out a Three SIM before signing up for a Huawei AI Cube with a contract. You may have a far better experience — some people report 30-40Mbps speeds. 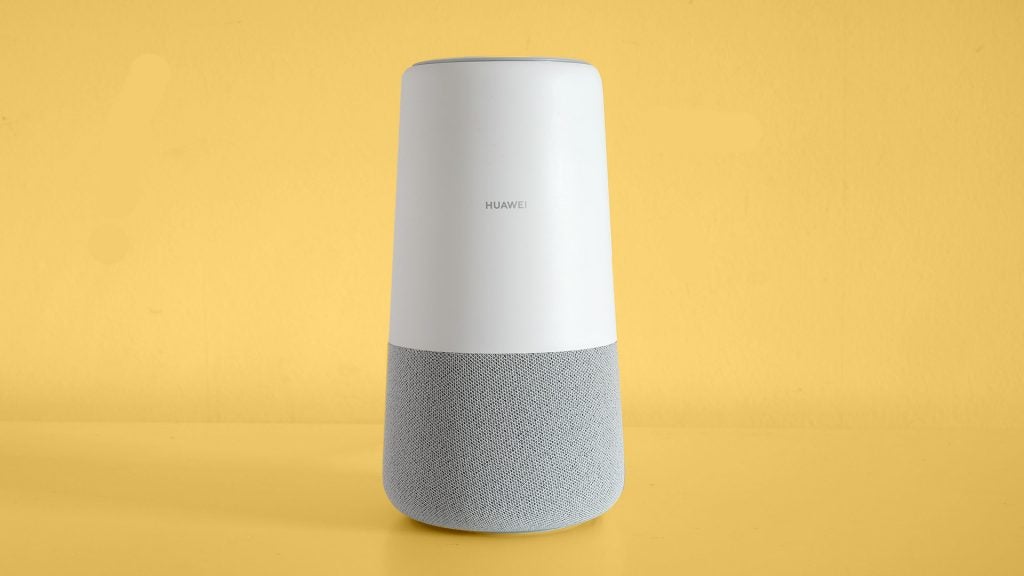 My flat is well in a zone considered to offer “indoor & outdoor” 4G coverage, so these 3G-style speeds are disappointing. You can try out your own address at the Three website. Three claims the HomeFi offers an average of 14Mbps.

The Huawei AI Cube’s own networking hardware is basic, but still much better than the experience you’ll get using your phone as a hotspot.

It can connect to 64 devices simultaneously and has a CAT 6 4G modem capable of 300Mbps down and 50Mbps up. You’re not going to get close to touching that ceiling here. There’s also a single Gigabit Ethernet port, which allows for some way faster than those attainable through a 4G internet connection. 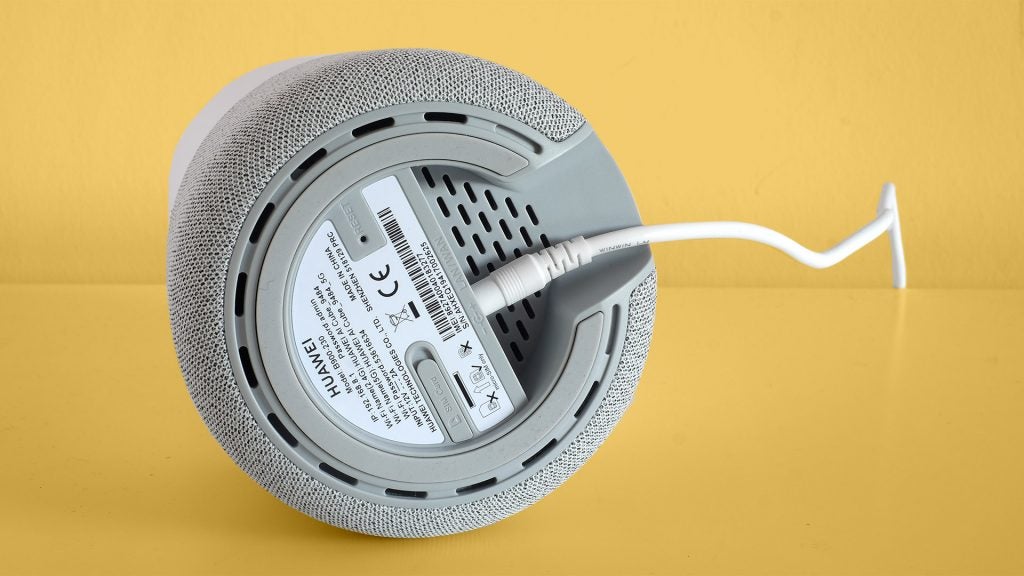 The Huawei AI Cube is a slight missed opportunity as a connected party device, too. The lack of a battery means it needs to be plugged in at all times. If it did have its own power source, you could theoretically use it as a portable streaming music speaker that doesn’t require your phone; just ask Alexa.

Of course, this isn’t what the AI Cube is about, particularly from Three’s perspective. It’s a vehicle for Three’s home broadband. To make it portable would almost be to make it too powerful.

Huawei AI Cube – It has Alexa but misses many features

Nor are there any of the other common wireless speaker methods on offer. The Huawei AI Cube doesn’t have Bluetooth and doesn’t show up in the Spotify app; there’s no support for Spotify Connect.

This speaker brings to light how good we have it with cheap Bluetooth speakers and seamless “multi-room” style unit from Sonos and the like.

The AI Cube also appears to be less responsive than Amazon’s Echo speakers when treated as a pure voice command speaker. Alexa devices use either a light ring or a tone to let you know the speaker has heard you. The Huawei AI Cube uses an LED light ring around its top, but its output is so meek that even in a room with a fair amount of ambient light, you’ll barely see it.

And, as a result of mediocre 4G performance in my home, music cut-outs and general unresponsiveness proved common in my flat.

Since the AI Cube is Alexa-enabled, it also misses out on many of the features of true Amazon Echo speakers, including the ability to make calls. You can’t group the AI Cube with your smart home devices, which makes voice control more difficult as you have to say the name of the device you want to control. With groups, an Echo speaker knows which smart devices are around it, for easier control – such as being able to say, “Alexa, turn on the light.”

The Huawei AI Cube has issues, but its looks are perfectly pleasant. It’s 22cm tall, and curved to match other smart speakers. Grey fabric covers its lower part, and there are touch panel buttons on its top allowing you to control volume without using any voice commands. You’ll also find a physical button up here that disables the mic.

Like the camera sliders of Echo Show speakers, Huawei makes this button stand out – as if buttons are more trustworthy than touch pads. 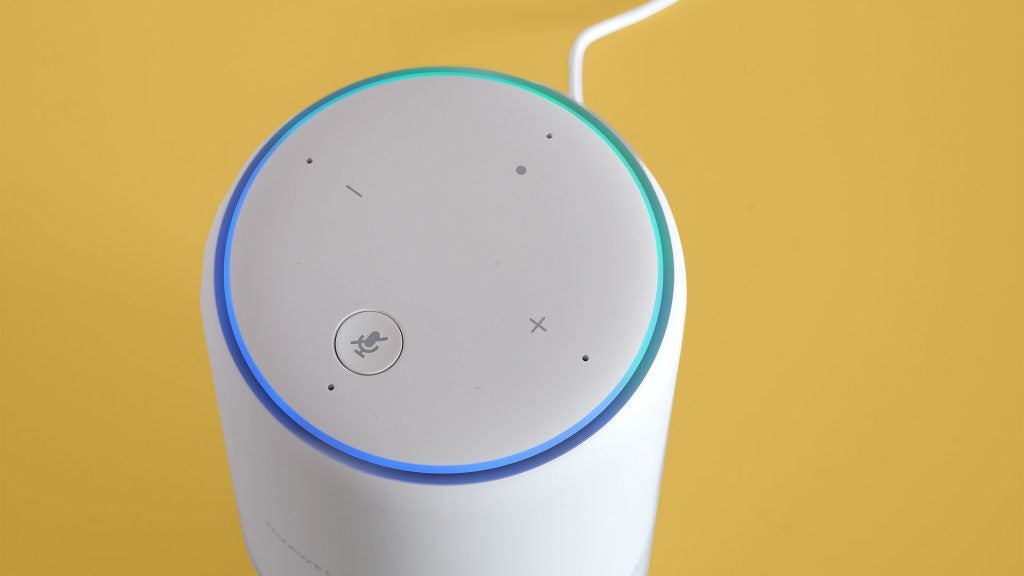 There are four mics rather than the seven used in Amazon’s own Alexa units, and no connectors beyond the Ethernet socket on the back. It’s stripped-back compared to both wireless speakers and routers. But the main aim here is to avoid a clunky router-like look – and in that Huawei has succeeded.

The Huawei AI Cube has one active driver and a pair of passive radiators. This tells you that first, this speaker doesn’t offer 360-degree sound. All the higher-frequency information comes from its front, although the side-firing radiators do help to disperse the sound and give it a perception of width.

Amazon’s Echo Plus uses downward-firing drivers and a wave reflector to fire out sound in all directions. The AI Cube’s array is more conventional.

This would be fine if Huawei didn’t market this speaker as “360 degree” – but it does. To make this claim remotely convincing a speaker needs active drivers that output higher-frequency sound on at least two sides. Emitting a bit of bass from the sides doesn’t really count.

The passive radiators used here are important, though. They ensure the Huawei AI Cube has a semblance of bass, avoiding a sound that’s all too weedy. 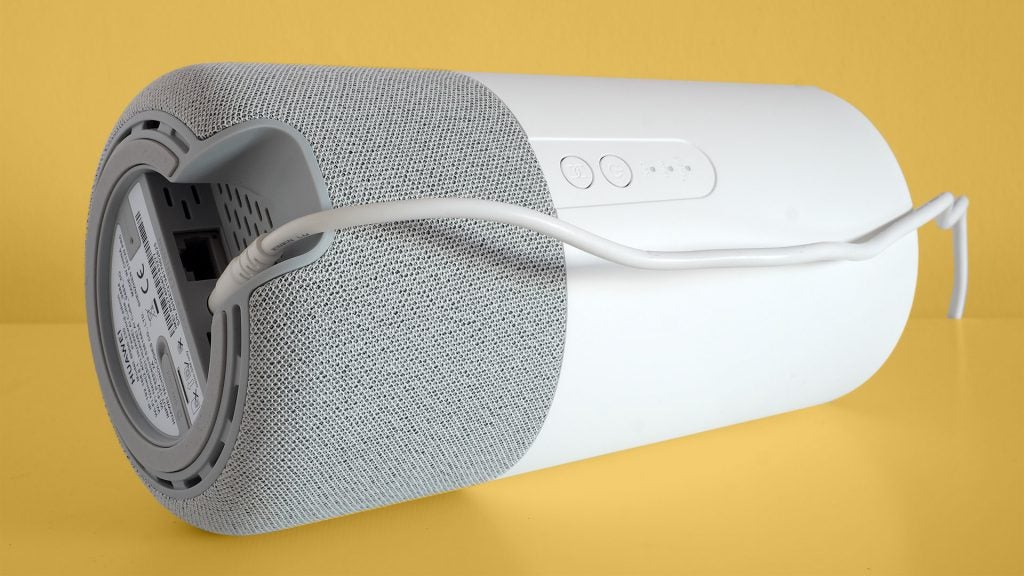 Compare it to the best-in-class smart speakers and the Huawei AI Cube doesn’t come off well. The Sonos One decimates it on every audio front. Its bass is far deeper, its mids are more detailed and better projected, dynamics are leagues ahead; the scale of the sound is barely comparable.

The Huawei AI Cube doesn’t offer the sound to match its stature. Limited dynamics make it flat, the mids are basic, and the bass doesn’t have the punch or depth to make music sound particularly lively.

Comparing the Sonos to the Huawei isn’t entirely fair, however. The Sonos One sells at the same price, but doesn’t have a 4G modem. But comparisons to cheaper speakers reveal the same issues.

I listened to the Huawei AI Cube alongside the Bluetooth Ultimate Ears Boom 3 and Jam Heavy Metal, alongside the Echo Show 5 Alexa speaker. The two cheaper Bluetooth speakers still present a much more engaging sound, with deeper bass, more involving mids and better scale. Thankfully, it does beat the £79.99 Amazon Echo Show 5 in some respects. There’s slightly better detail to the upper-mids, which makes the AI Cube sound more refined. But the Show 5 tries harder to offer “fun” bass, and isn’t actually that far behind in the sound quality stakes.

For context, the Amazon Echo Show 5 is a cheaper than the Huawei AI Cube, and has a display. 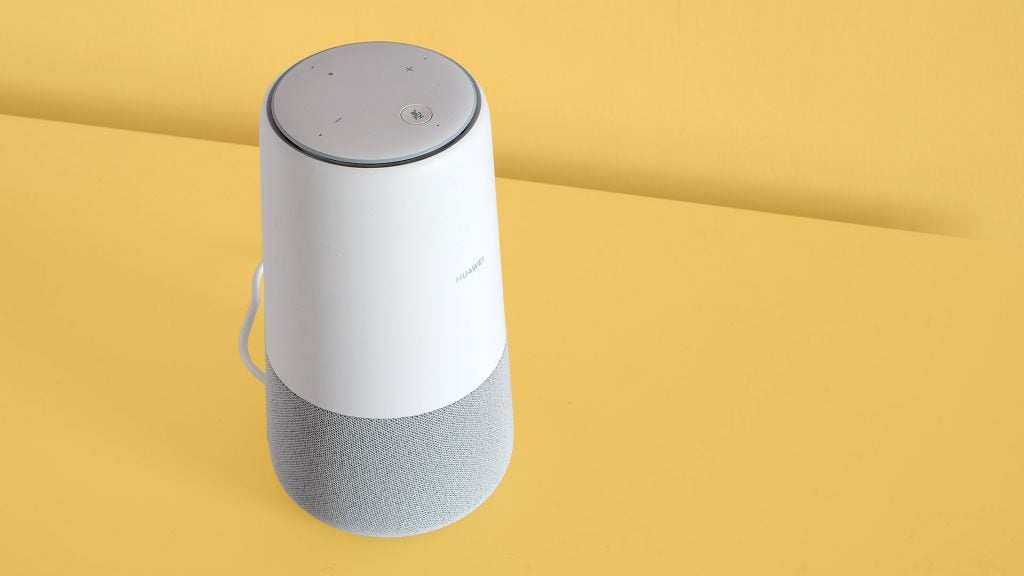 Should I buy the Huawei AI Cube?

Don’t buy the Huawei AI Cube expecting it to replace both your hi-fi and your router. Its smart speaker side looks the part but, ultimately, is a disappointment. There’s no support Spotify as of yet, and sound quality is mediocre at the price.

Pair the AI Cube with one of Three’s unlimited data plans and it becomes far more interesting, if you have a decent connection to the Three network at home. My experience was poor, with the AI Cube far too slow to replace my broadband. However, if you have excellent Three signal in your home and already have no love for the traditional broadband suppliers, it could be worth a go. There’s a 14-day returns policy, so you shouldn’t find yourself immediately locked into a 12-month contract if your connection proves as poor as mine.