The trouble with people is they’re not all the same. Some like it hot, some like smearing jam on themselves, some like football, some even like the iPad! And when it comes to smartphones, it’s no different. Are you a speed freak, is the screen size all important, or is it all about what apps you can get? Well, if your preference is for a smaller than average smartphone, that’s a bit cheaper as well, then the HTC Wildfire S should be right up your street.

The latest addition to HTC’s smartphone lineup is the successor to last year’s Wildfire and targets the same audience; those looking for a phone both smaller and cheaper than your average smartphone. It comes with a few notable improvements, including a higher resolution screen, so considering how much we liked the original, this one’s sure to impress… right?

Well, yes, it does, mostly. For a start the chassis is beautifully crafted. There aren’t the great swathes of aluminium found on the Desire S but the screen surround is made from this material while the back has a nice soft touch plastic finish. Combined with the glass screen and some subtle touches, like the slim band of lighter coloured plastic that sits between the front and back plates and the plain silver strips that make up the volume and power buttons, you have a device that is elegant and strong yet cute. 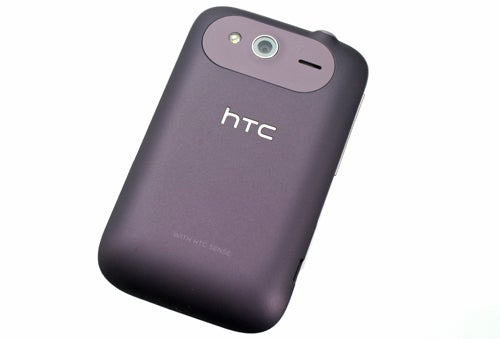 Okay, so the mauve colour of our review sample probably has something of a niche appeal but even despite this, we rather like it.

General handling is also excellent. The shorter stance makes it feel noticeably more secure in the hand than larger phones, aided by the soft touch backing – the power button is also easy to reach. At 12.3mm thick, it’s actually a bit porkier than many larger smartphones but this in fact aids usability, making it easier to grip. Only width is on par with most smartphones, its 59.4mm statistic almost equalling that of the 59.8mm Desire S.

There aren’t too many slip ups when it comes to features, either. You get a microUSB socket, a headphone jack, a microSD card slot under the battery cover for adding more storage, and a rear facing 5 megapixel camera with LED flash. Only a front facing camera and microHDMI video output are obvious omissions, and neither is yet commonplace or essential.

What you most obviously sacrifice when opting for a smaller phone is screen size, and indeed the Wildfire packs only a 3.2in model. While technically only 0.3in smaller than that of an iPhone, the difference is noticeable, and of course the iPhone screen is already looking a bit small compared to some smartphones.

For general navigation, web browsing, looking up a contact and such like the Wildfire does fine, indeed the quality of the display is excellent. Its viewing angles are good, colours are punchy but accurate and the improved screen resolution (up from 240 x 320 to 320 x 480) makes all the difference over the original. 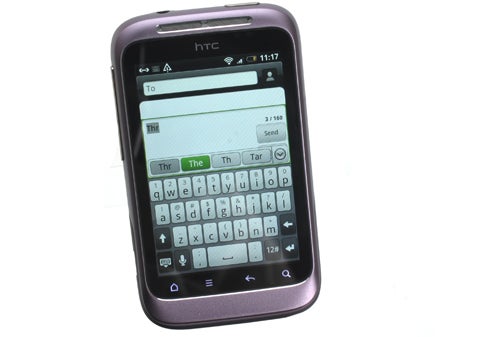 However, it’s a bit small for sitting back and watching a video of any length and more importantly it feels a little cramped for typing. Indeed, this is for many people going to be this phone’s Achilles heel. Typing at a steady pace was fine, but as soon as we tried to crank up our speed it simply couldn’t cope, getting almost every word wrong. We’re talking typing pretty fast here and of course there’s a large degree of human error but at the speed we type comfortably on a Sony Ericssson Xperia Arc, the Wildfire S was hopeless. It isn’t helped by the addition of HTC’s own on screen keyboard, which we actually think is worse than the standard Android one. Then again, as long as you’re more of a tortoise than a hair when it comes to typing, you should be fine. Those with small fingers may also have more luck.

Something else that doesn’t help the typing proficiency of this phone is its speed. Sporting just a 600MHz CPU, the phone can get a bit laggy while typing fast, and even navigating around the interface causes the odd slight pause. You can alleviate this somewhat by clearing the homescreens of most widgets, and again typing slower will heed better results, but those of you used to careering around your smartphones will find the Wildfire S not up to snuff. 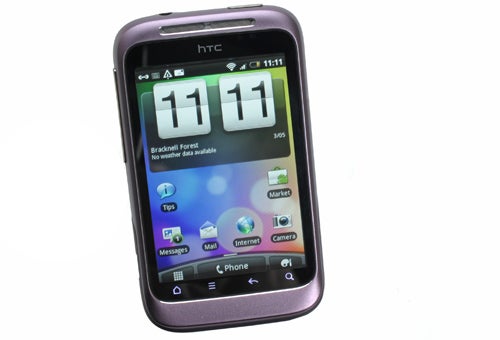 One area where the lack of speed is felt most acutely is gaming. You can get away with the likes of Angry Birds just about – it’s playable if a little stuttery – but more graphically intensive fare like Reckless Racing is something of a no go.

All is far from lost for the Wildfire S, though. If you stick to smartphone basics like email, web browsing, Facebook, Twitter, GoogleMaps and YouTube you’ll be fine and indeed the Wildfire S perfectly fulfils its remit as a more compact and bijou version of larger smartphones – after all, you’re to expect a degree of compromise from a smaller device. 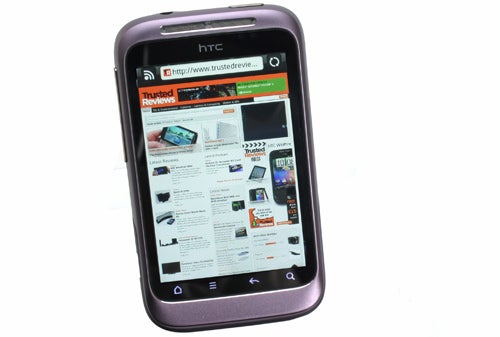 One area where this phone should be right on the curve is its OS. It runs the latest 2.3 version of Android so is packed with features. That said, because HTC has meddled with things, the benefits aren’t quite so obvious or indeed present at all. As well as the aforementioned changes to the keyboard, HTC also uses its own (admittedly quite good) text selection and editing interface, and the general smartening up of the interface that Google did in the latest version of its OS is masked by HTCs own stylings. 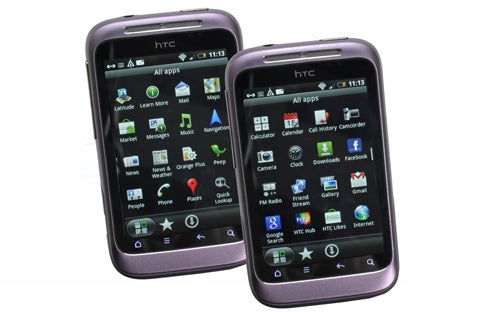 None of this is disastrous but it all adds up to an experience that feels not as good as it could have been. 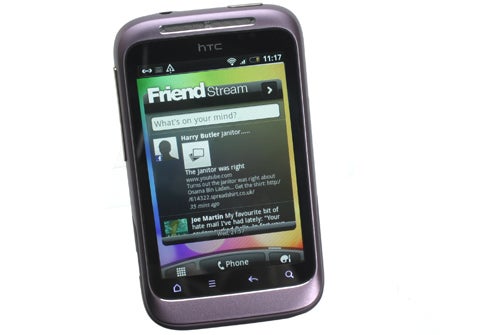 One positive addition is HTC Sense. This brings together information from Facebook and Twitter and adds it to your contacts, giving you the ability to view all your friend’s information from a single view. In truth we’ve never really used this facility but it can be useful if you’ve forgotten a friends Twitter tag for instance or if you’re chatting to someone over multiple messaging services.

The lack of HDMI output will be a disappointment for some but with such a modest CPU onboard and such lowly multimedia support, it’s a feature that would’ve been next to useless anyway. We loaded the Wildfire S up with a selection of videos and found that only the most basic mp4 format was supported and even then quality has to be pretty low for the phone to cope playing it back. 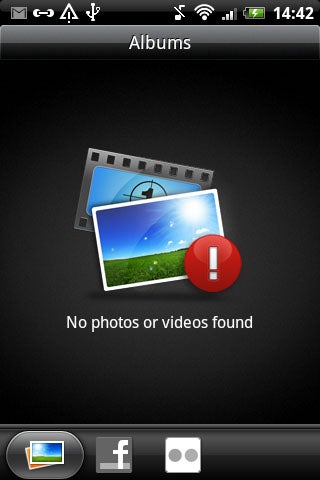 Thankfully, due to the quality of the screen, headphone jack and speaker whatever you’re watching is generally easy to make out both visually and aurally. The music player has a fairly crude interface but if you load a microSD card up with correctly tagged mp3s and pop it in, it quickly and easily sets about arranging them into a neat library. Playback quality is decent too. 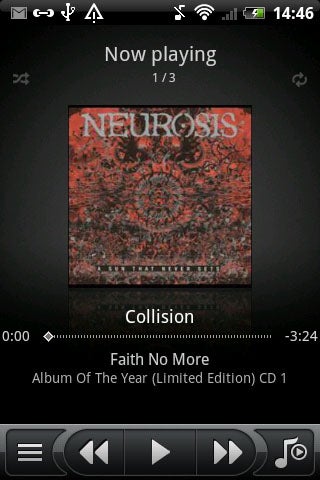 HTC has never been known for its cameras and the Wildfire S isn’t going to break that trend. The 5 megapixel shooter does the basics with autofocus onboard allowing for in-focus up close shots and an LED keeping things visible in the dark. However, colour accuracy is a bit hit and miss and general sharpness is pretty poor. 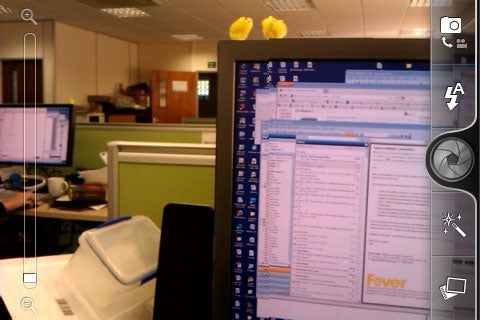 Video is also available but it’s not HD. Moreover, the framerate is only 24fps, resulting in a juddery look to any form of motion. It’s also poor at handling changes from dark to light areas with noticeable steps as it changes from one to the other, instead of a smooth transition.

Thankfully call quality is much more acceptable with no obvious deficiencies to note. Battery life is likewise better than we might have expected, though realistically you’re still going to want to charge it every other night.

When it comes to price, the Wildfire S comes up against that perennial nuisance of the budget smartphone market, the Orange San Francisco (ZTE Blade), which with its large high resolution screen for just £90 or so is still an incredible steal. However, on most other fronts this phone’s ~£220 price is on the money. Certainly it’s at a similar level to most other alternative smaller Android smartphones. 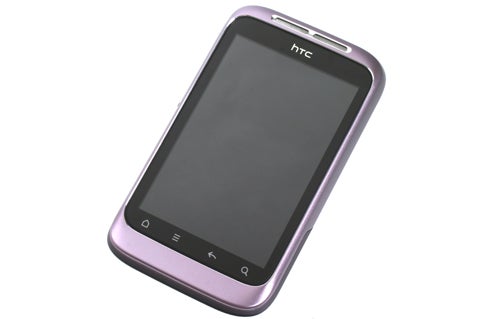 Ultimately, then, this phone’s appeal comes down to whether you can accept the compromise of a smaller slower smartphone. If you can then it’s definitely one of the better examples but if not, well then I’m impressed you’re still reading!

If you find most smartphones too large and expensive then the HTC Wildfire S could be right up your street. It’s cute, well built and packs in all the essential features, and most importantly has a higher resolution screen than its predecessor. However, it is a bit slow and still hasn’t fixed the fundamental issues of being a smaller touchscreen phone, namely the screen being too small. So, if you really have your heart set on a smaller smartphone then the compromises you have to accept are manageable and it compares well to the competition. However, if you’re just after a cheaper smartphone, there are better, larger alternatives, especially discounted models from last year. 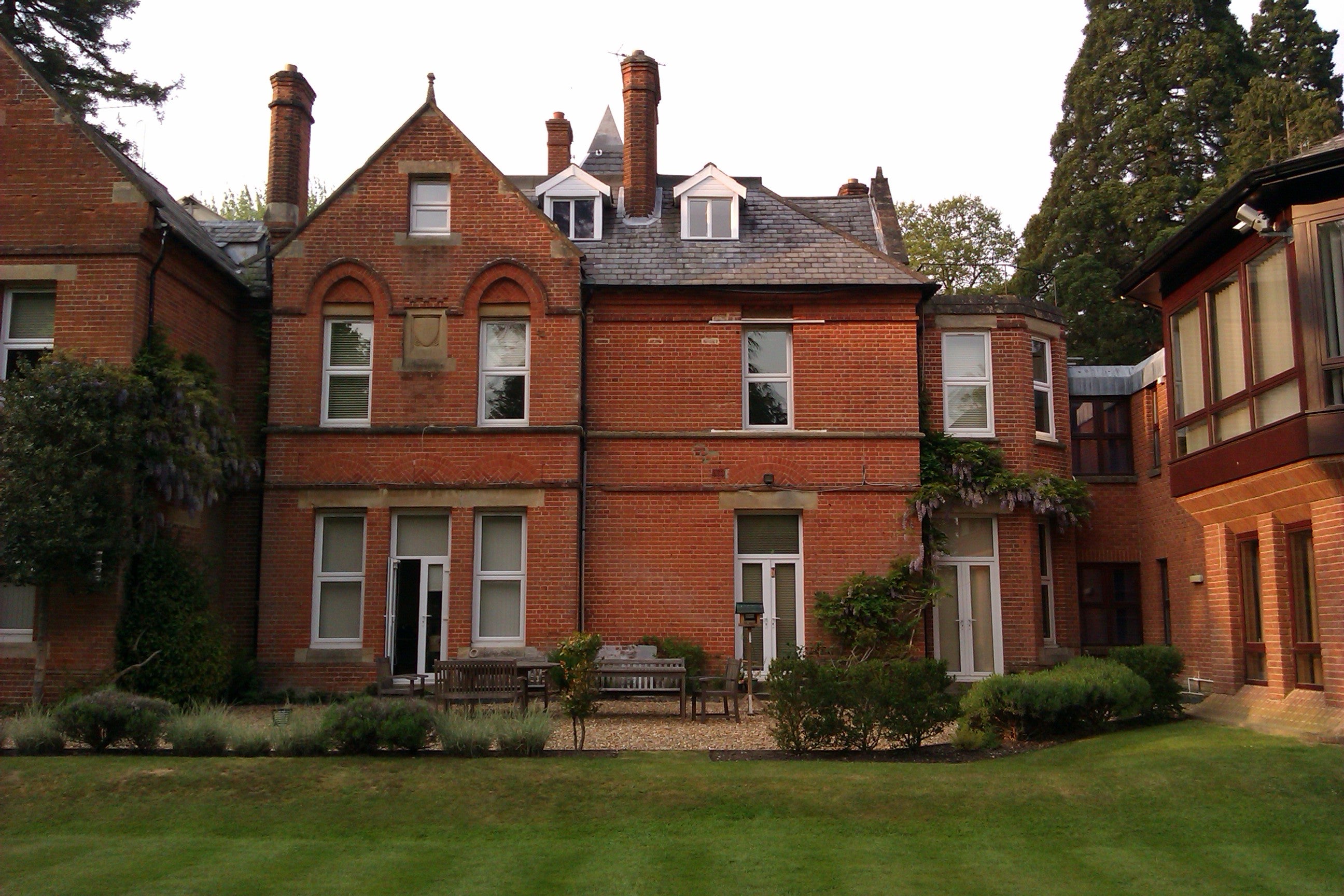 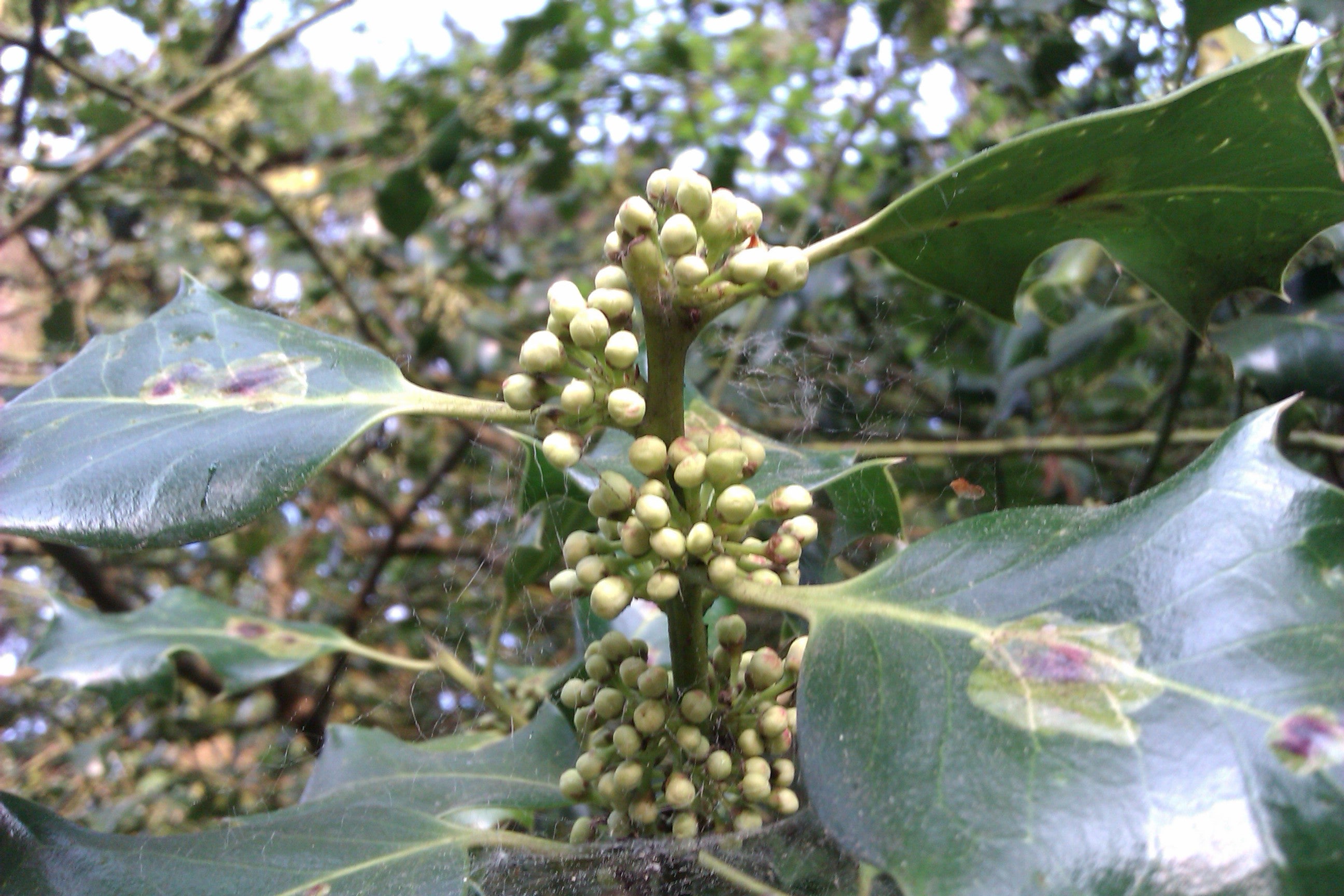 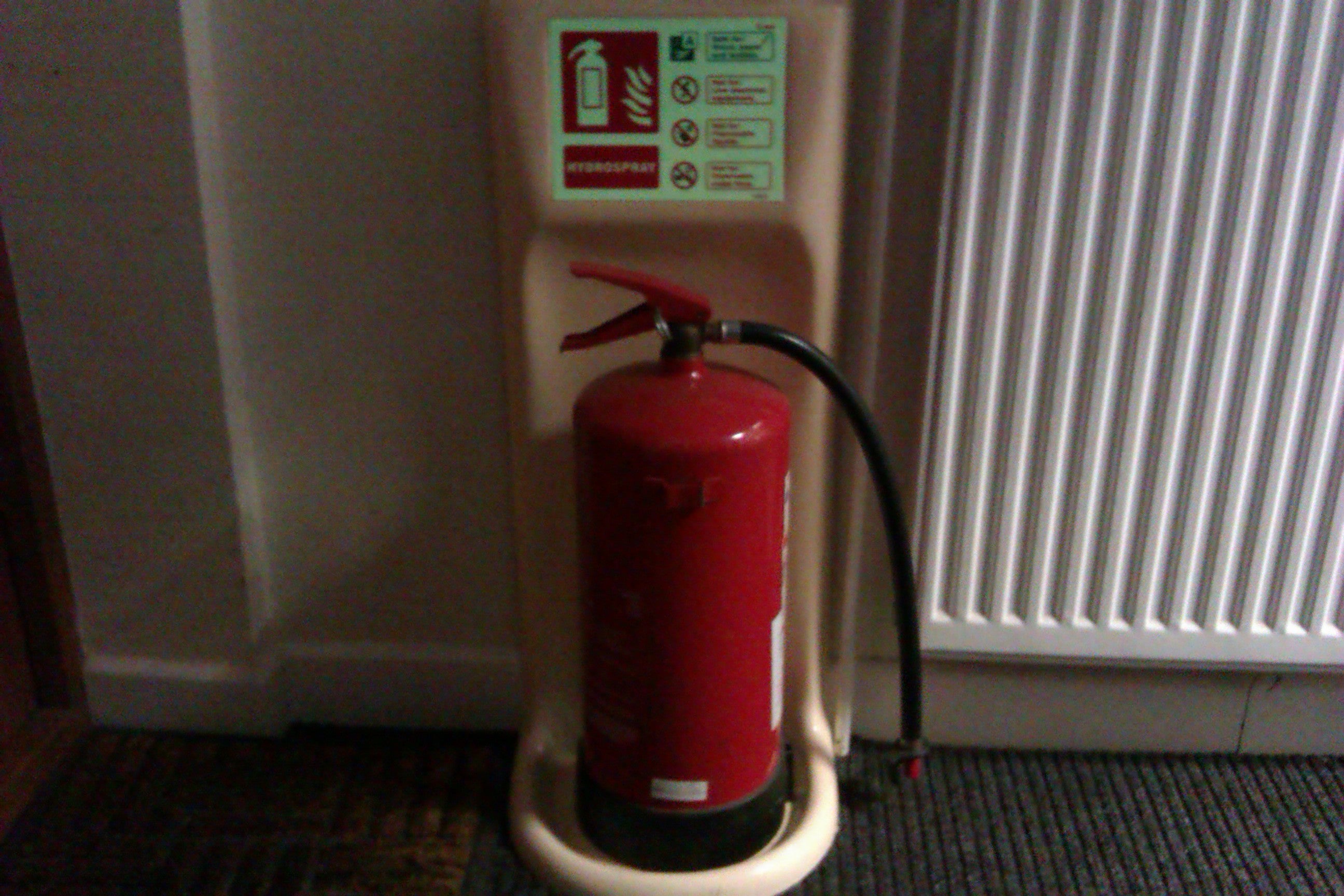 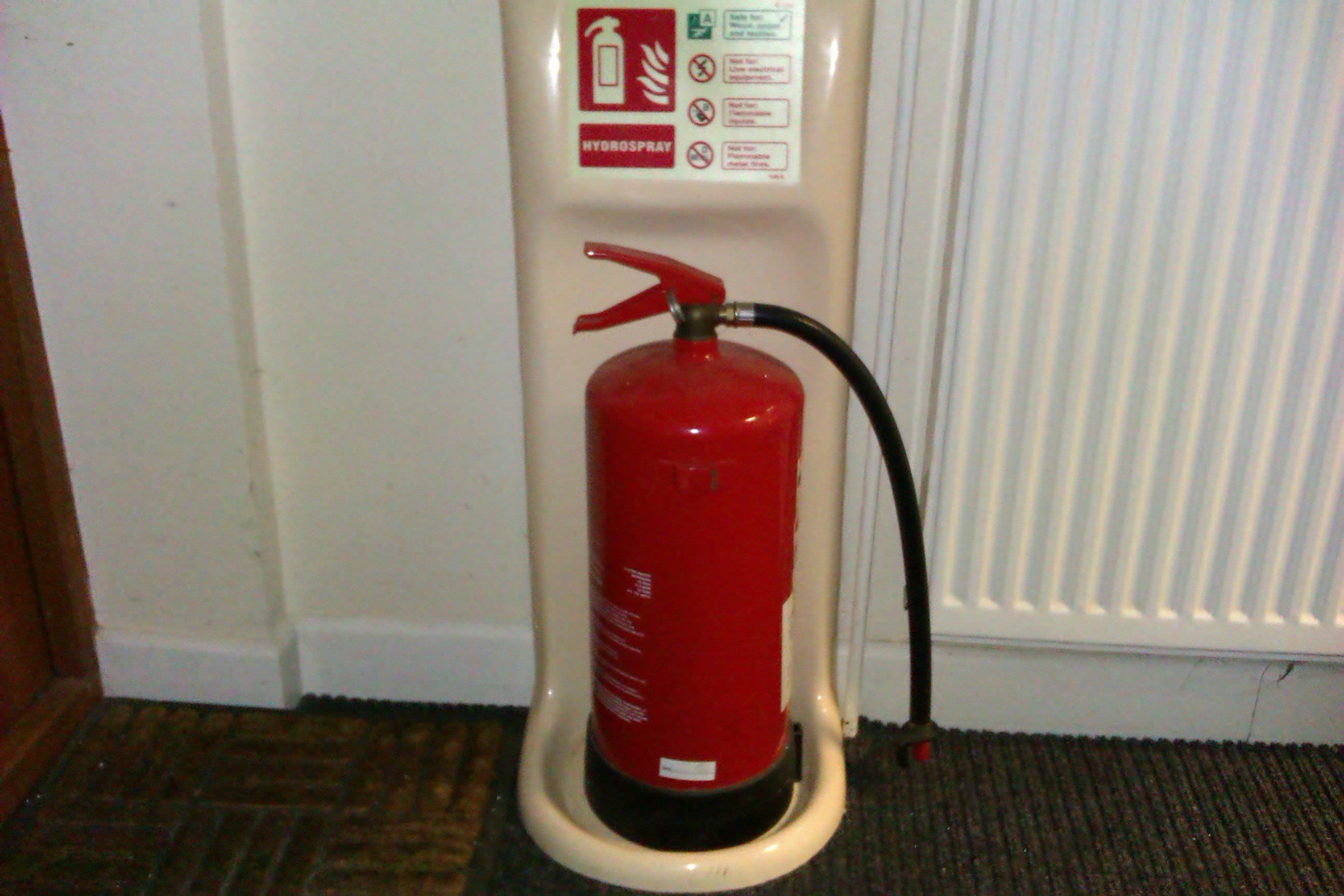