We’ve long-held the belief that what the mobile phone market needs is a small, low-cost handset that packs in all the key features of top end smartphones and is reasonably well made. We’ve had reasonably feature-packed cheap handsets like the T-Mobile Pulse and we’ve had small handsets like the HTC Tattoo and HTC Smart, but none has yet delivered on all fronts. Hoping to finally crack the nut is the HTC Wildfire.


What makes this phone special is that, while its processor is only 528MHz and its screen only 3.2in with a resolution of just 240 x 320, it retains all the build quality of its bigger siblings. Indeed, this can be thought of as the child of the HTC Desire and Google Nexus One sporting as it does the key features of these two handsets, namely the metal and soft-touch plastic construction, glass capacitive touchscreen, touch sensitive buttons, and an optical trackball.

That combination of factors makes this easily the most attractive small Android handset we’ve seen. The taupe metal sections and grey soft-touch plastic create a great muted combination of colours, while the smooth expanse of that glass screen looks as good as ever. Moreover, this is as well put together as any handset we’ve ever seen (iPhone 4 aside) and really just highlights our problems with the build quality of more premium handsets like the Sony Ericsson Xperia X10 and Samsung Galaxy S – if HTC can do it at this price than those handsets should be just as good for twice the price.

The phone’s small size also makes it nicer to handle than many larger handsets. Certainly it’s a darn sight easier to reach with one hand the screen unlock button on the top edge of the phone. Admittedly with dimensions of 106.8 x 60.4 x 12 mm, it’s not the smallest of small handsets so it may still be too hefty for some. However, it is around 8-12mm shorter than the big-guns and around 20g lighter as well.

Along with the unlock button there is a headphone jack on the top edge, while the left is home to a volume control and microUSB socket for charging and plugging the phone into a PC. There sadly isn’t a dedicated camera button, which makes taking photos slightly cumbersome. At least the camera application is fast and easy to use and produces acceptable quality photos of up to 5 megapixels. As ever they’re still some way off even a basic dedicated compact but will do for the occasional snap of friends. However, video is rather let down by a low resolution of 320 x 240 that is simply not enough to see any sort of detail. At least with an LED, you can capture both videos and photos in the dark.


”Update: Upon further investigation, we came to the conclusion that the images and video we first assessed were hampered by a smudged lens. We’ve now updated the above paragraph pertaining to the camera quality and updated the samples pictures at the end of this review. ”

Upon seeing the row of touch sensitive buttons that run underneath the screen we were very apprehensive as those on the Nexus One were rather poor. Thankfully there are no issues with those on the Wildfire, in fact they’re very responsive and easy to use. We still feel, however, that Android devices in general have too many buttons – the search and back buttons in particular are superfluous and should be replicated in software on a touchscreen device.


Likewise, while the optical trackpad that sits below the buttons works very well, it is so seldom used that it really could/should be dropped. In fact this is one thing the Samsung Galaxy S got spot on as it used just three buttons (home, back, menu) and no trackball of any description. 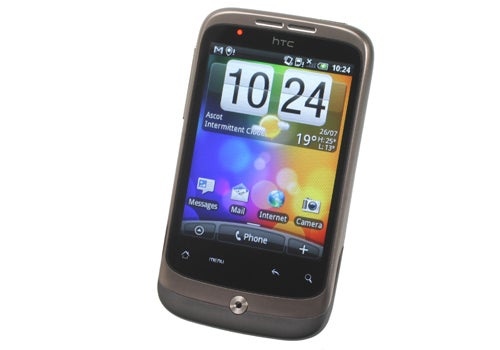 Take the back off and you’ll find a 1300mAh battery, which is slightly less than the 1500mAh cells you get on most larger phones. Nevertheless, due to the smaller screen, we found battery life was on a par with those devices. Typically you’ll want to charge every night or you’ll be running very low towards the end of day two, but conservative users might stretch to three days. Thankfully you don’t have to remove the battery to reach the microSD slot, which lets you add up to 32GB of storage to the miserly 128MB built-in. 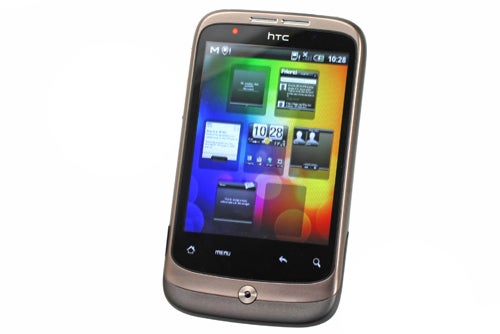 Turn on the Widlfire and inevitably the low resolution of its screen is immediately obvious; pretty much everything looks pixellated and almost blurry. There’s no denying it’s a limiting factor. Certainly you won’t want to watch high quality videos, view many pictures, or read large amounts of text (i.e. eBooks) on it. However, in general use it’s absolutely fine. Normal web browsing, reading emails and texts, navigating on Google Maps, and using Facebook is easy to do without too much hassle.


One potential problem is that some Android apps don’t support such a low resolution, with games being the obvious casualty. The vast majority of general productivity apps do, however, as do some games. Potentially more of a problem is that the soon-to-be-released version of Android, 3.0 Gingerbread, has a minimum hardware requirement that will mean it definitely won’t work on this device. 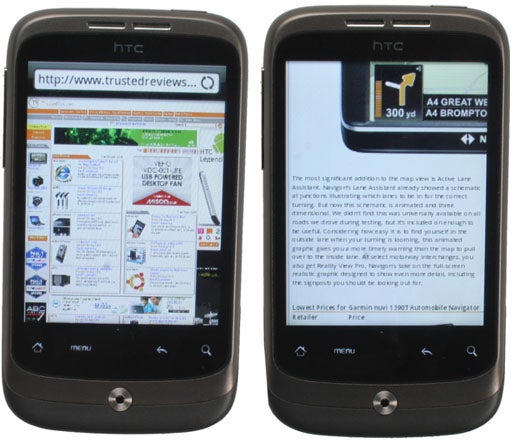 As it ships, the Wildfire comes with the 2.1 version of Android, which is one step behind the latest 2.2 version that adds native Adobe Flash support, quick switch multi-language keyboards, and many other small improvements. However, 2.1 is still very capable and we expect a 2.2 update to arrive at some point.

Being an HTC handset, the standard Android interface is replaced with the Taiwanese company’s Sense UI. This now familiar customisation provides a horizontal array of seven desktops which you can place shortcuts and widgets on, while along the bottom of the screen are shortcuts for the main menu, the phone, and for customising the home screen layout. 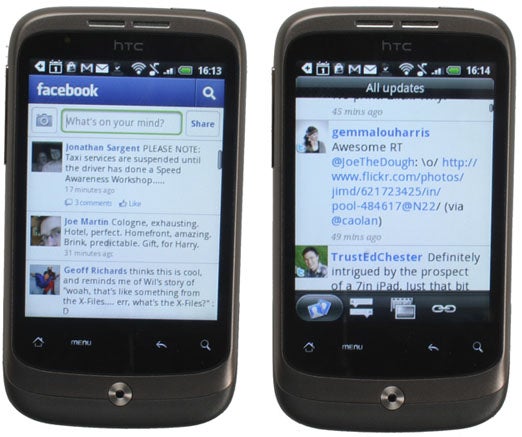 The general look has also been tweaked giving it a slightly smarter all over grey appearance, while many of the core applications, like email and gallery, have also had a visual overhaul. They do look nice, but we don’t actually think they add a lot in terms of usability. Certainly based on these tweaks we’d be glad to see the back of custom Android skins as Motorola has recently alluded to.


Overall, though, the Wildfire holds up very well in general use. When you first setup the phone it can seem rather sluggish, which one immediately puts down to the 528MHz processor, which is not a patch on the 1GHz (1,000MHz) ones used on many larger models. However, turn off all the, largely superfluous, widgets that HTC has loaded on by default and it soon quickens up to the point where it’s plenty fast enough.


Messaging abilities are good if not outstanding. SMS exchanges are stored in conversations and several email accounts can be accessed, including Microsoft exchange accounts. You can’t, however, view messages from all your accounts in a single inbox (as you can on the iPhone 4) and email exchanges aren’t arranged into conversations. HTC’s FriendStream pulls in status updates and messages from a number of different social networking services, and you can also add Facebook information to your contacts (which of course are imported from your Gmail account). 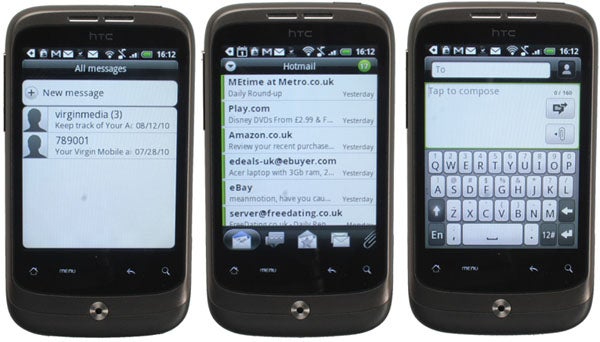 Despite this version of Android having no official support for Adobe Flash, HTC has still enabled it in the web browser so you can watch streaming video and play all manner of silly flash games, though this is one area where the slow processor really struggles. Overall the web browsing experience is very good, though. You obviously need to zoom in quite a lot to make text readable, but with the text reflow feature text is automatically squashed to fit the width of screen you’re using, meaning less scrolling from side to side. The multi-touch pinch to zoom gesture is also supported.


Typing on the small screen is a little more difficult than on larger devices, but thanks to the wonderfully responsive touchscreen it’s still considerably better than many cheap rivals. 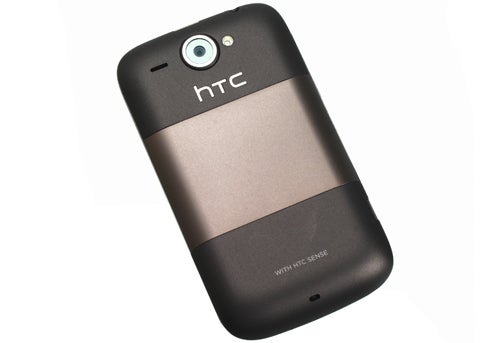 As for actually making calls on the Wildfire, it’s okay but not exceptional. Earpiece volume is adequate, but it can get a bit distorted at high levels, likewise the microphone can sound a little harsh and doesn’t support noise cancelling.


The HTC Wildfire isn’t perfect. Its low resolution screen won’t appease heavy users, or those looking to enjoy games and video. Also, the phone isn’t actually ”that” small for such a low resolution screen. However, it has all the essential features of a smartphone, and the screen is still adequate for web browsing, social networking and most apps. Most importantly, though, no other phone of its size and price offers this level of design and build quality. Based on this it’s easy to recommend. 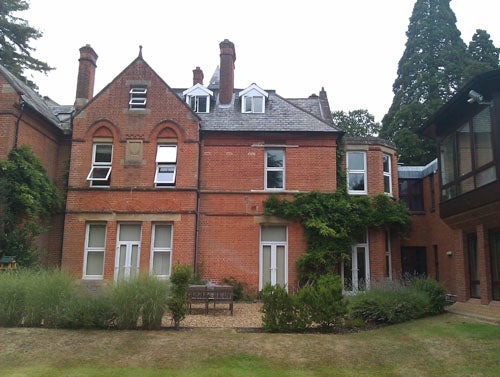 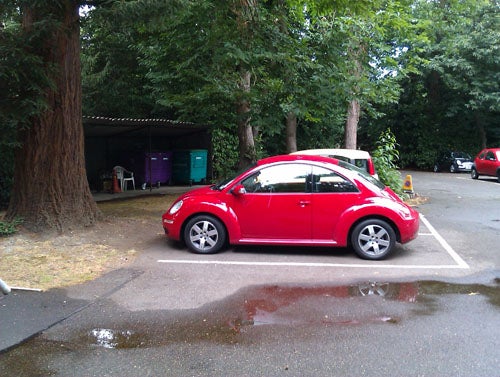 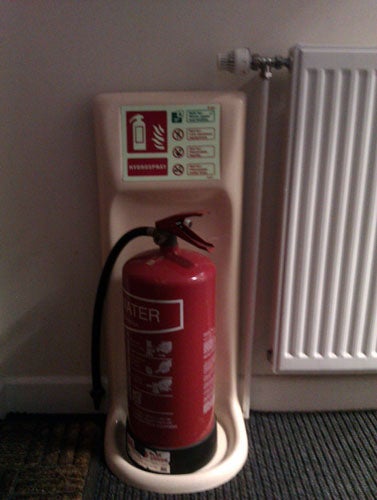 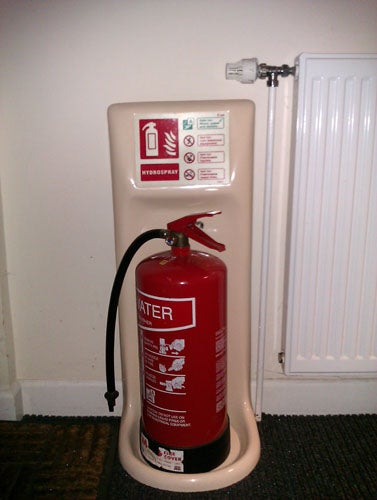