The HTC U11+ is a 0.5 upgrade to the company’s previous flagship, the HTC U11. It’s a minor refresh akin to OnePlus’ upgrade of the OnePlus 5 to the OnePlus 5T.

It offers updates to the U11’s design and hardware, including an improved screen and larger battery. If it was released half a year ago, it would have been one of 2017’s best handsets – and even now it remains a solid choice that will meet most buyers’ needs. But into 2018, with the threat of next-generation handsets, it feels a little late in the game. 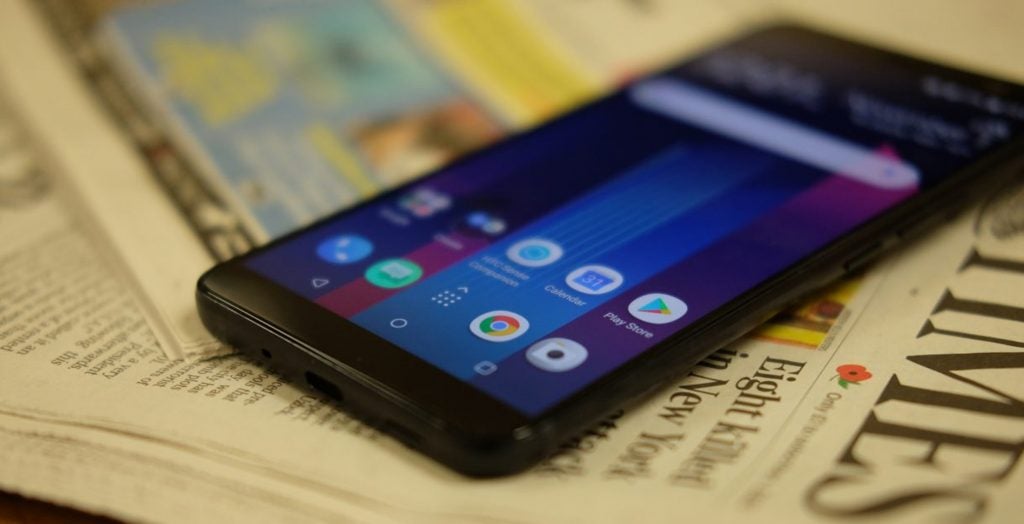 At first glance, the U11+ doesn’t look like a huge departure from the U11. The only obvious difference between the two is that the U11+ is slightly taller and thinner than its predecessor and has a significantly smaller bezel. But unless you hold the two back to back, you’re unlikely to notice the changes.

Both phones have the same ‘Liquid Surface’ design that debuted on HTC’s previous U Play and U Ultra handsets. It replaces the unibody metal design for which HTC was well known, with a combination of metal and glass.

While I can see from an engineering perspective the reason HTC has opted to make such a move – metal bodies and antennas don’t play well together and are a faff to make work – I’m still not completely sold on the new look for variety of reasons.

For starters, although the black unit I tested looked super-swish out of the box, within minutes of picking it up, the rear of the devices was covered in smudges and fairly grubbly-looking.

In addition, the glass back feels like it’s been bolted on to the metal frame. This makes the U11+ fairly cumbersome in the hand compared to other top-end, mixed-material phones such as the Samsung Galaxy S8 and iPhone X. 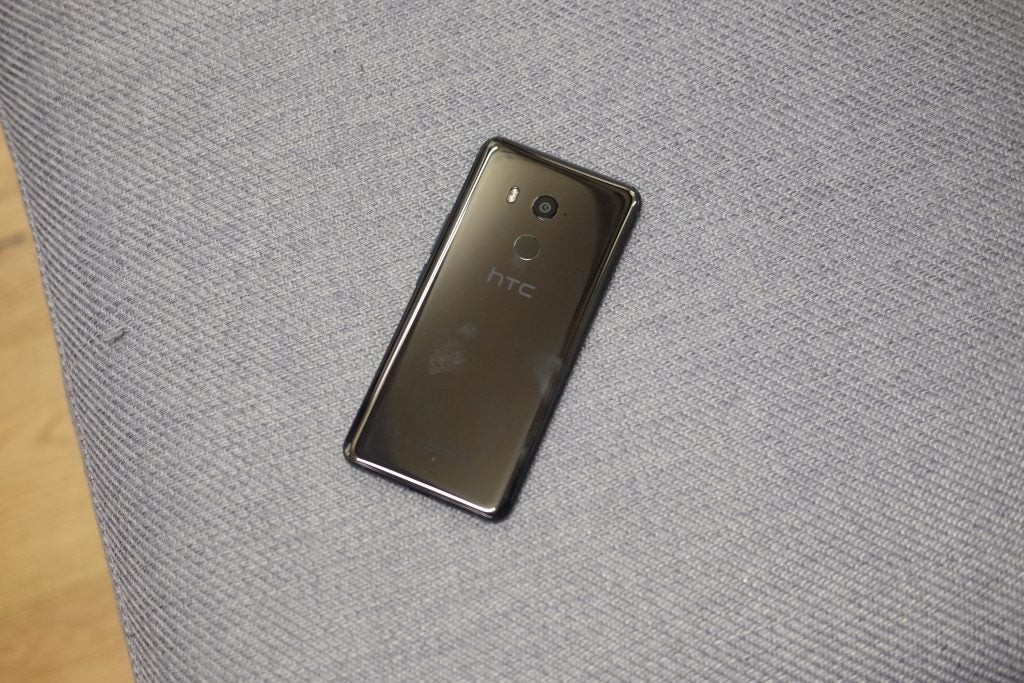 I’m also not a fan of the fact the U11+ is lacking a 3.5mm jack, although this is a grumble I have with pretty much every modern flagship – damn you, Apple, for starting this trend.

However, outside of these niggles, the U11+ does tick all the right boxes. Round the back you’ll find a fingerprint scanner that proved accurate and reliable throughout testing. The USB Type-C port at the device’s bottom offers decent charge and data transfer speeds, and the inclusion of a microSD card slot makes it quick and easy to expand the U11+’s healthy 128GB of built-in storage.

Audio and recording quality, too, remain key selling points for the U11+. Like the original U11, the U11+ features 24-bit Hi-Res Audio support, HTC BoomSound speakers and four omnidirectional microphones for voice recognition and recording.

As before, the BoomSound speakers are a cut above those included in most phones, making movie-watching and listening to podcasts a significantly more pleasant experience. But I still wouldn’t want to use them to listen to music as at max volumes since they can take on an acidic quality. The only handset to offer better audio is the Razer Phone.

The four omnidirectional mics remain as impressive as ever, and ensure the U11+ is excellent at recognising and enacting voice commands – which is handy, since it’s one of the only handsets to feature built-in support for both Alexa and Google Assistant. In addition, thanks to the reappearance of HTC’s Edge Sense feature, the assistant can be activated by squeezing the phone – as seen in the U11 and Google Pixel 2.

Build quality of the U11+ is solid. Despite being a dirt magnet, the phone is fairly rugged for a glass-backed handset. After a week using the U11+ as my main phone – without the included case, but which I recommend most people use – the phone remains scratch-free, even after an accidental encounter with a hardwood floor. The IP68 certification translates to a reasonable degree of water-resistance, although you wouldn’t want to go diving with it in tow. 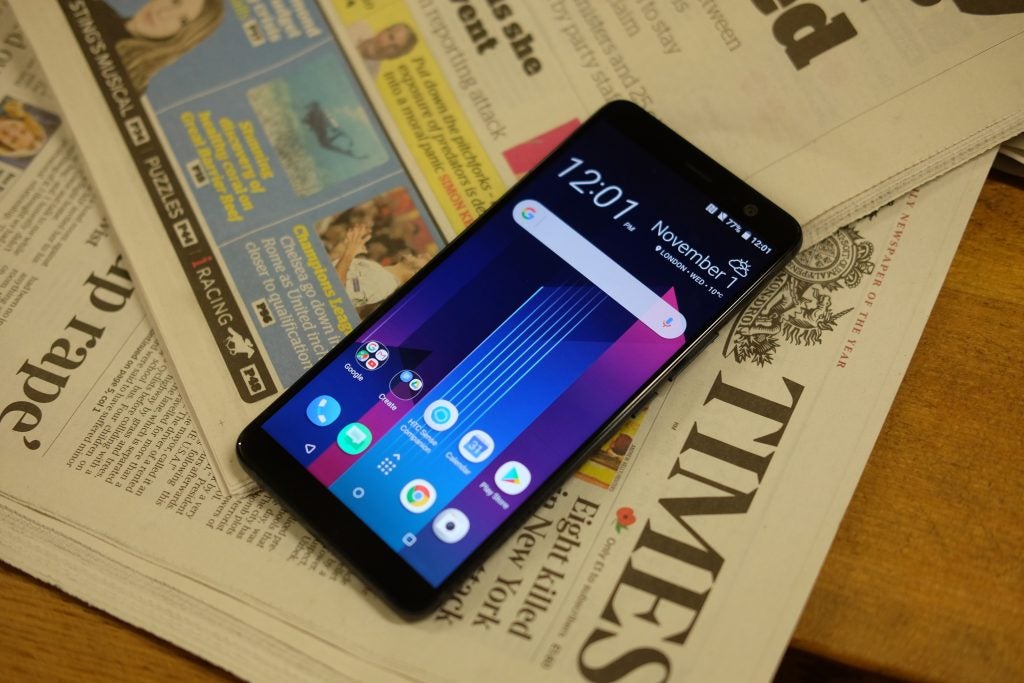 HTC has loaded the U11+ with a sizable 6-inch Quad HD+ display with an 18:9 aspect ratio. The screen is an upgrade on the regular U11’s 5.5-inch, quad-HD display in a number of ways – and I’m seriously impressed that HTC has managed to load such a big panel into the device without having to radically increase its overall size.

The screen remains LCD, rather than OLED, which means black levels aren’t quite as deep as seen on competing handsets such as the Samsung Galaxy S8 or Google Pixel 2. However, whites are noticeably cleaner and colours are well represented.

Unlike the Google Pixel 2 XL, which had a horribly calibrated OLED screen, colours on the U11+ look vibrant without being overcooked, and I didn’t see a noticeable shift to any side of the RGB spectrum. Top-notch maximum brightness levels also mean the screen offers contrast, despite the less inky blacks.

The resolution bump is good, but being honest, I didn’t notice a difference until I placed the U11+ and U11 side by side and spent more time than I’d like staring at the two screens. At this size, anything above FHD is going to look sharp and crisp.

HTC says it the display will be HDR10-enabled through a software update later in the year, but at the time of review, it wasn’t available.