HTC, manufacturer of Windows Mobile powered PDAs and smartphones launched itself as a brand in the UK around a month ago.


At the time, HTC announced two new handsets, and first under the microscope is the ‘TyTN’ – pronounced ‘Titan’. While this SMS-inspired spelling seemed clever at first, it’s getting to be a bit of a pain.


As a device though, the TyTN itself though is far from a pain. If you read Riyad’s reviews of the T-Mobile MDA Vario and the Orange SPV M5000 you are half way to understanding what the TyTN is all about because it is MDA Vario in size and shape but with the SPV M5000s 3G capability.


Both the MDA Vario and SPV M5000 are made by HTC and the company is continuing its strategy of doing deals with operators so that they can provide subsidised handsets.


So if you would like the TyTN after you’ve read this review you have three possibilities: buy sim free from a vendor like Expansys (very expensive and the reason for the low Value rating), take one of the Expansys options that includes an operator tariff, or keep your eye on your favourite operator for a few months to see if they start to stock it. 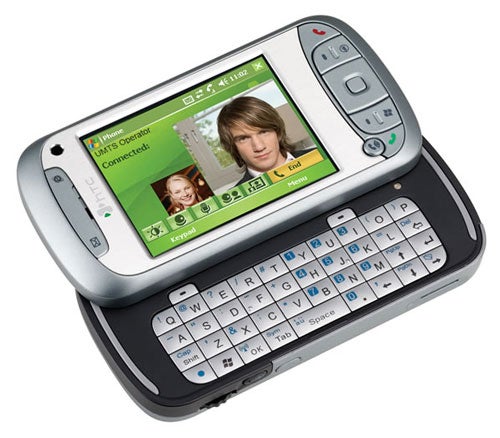 The TyTN is slickly designed. My current handset of choice is Orange’s SPV M600 because it sits as neatly in the pocket as most smartphones and yet delivers what you’d expect from a Pocket PC. But for a little more bulk the TyTN adds a keyboard and 3G capabilities, including video calling.


Much of the extra size is required to cater for the keyboard which slides out from the left long edge of the casing. Windows Mobile 5.0 supports both landscape and portrait format screens and with the keyboard hidden, the 240 x 320 pixel, 2.8in screen defaults to portrait format. Slide the keyboard out and this reorients to landscape, a far better format for dealing with text entered into the built in email software or Word Mobile.

The keyboard looks a little lost in the surroundings where others tend to stretch to the full space available. But actually I found it as quick and easy to use as that of Orange’s SPV M5000. The overall weighting of the device is such that it sits neatly between two hands while you thumb tap. One handed use is possible but only with a bit of finger contortion. The keys are illuminated by a blue backlight which is rather nice.


Two keys map to the Windows Mobile left and right soft-menus which saves you prodding at the touch screen, but sadly HTC has not found room for a number row. Number keys are embedded into the main qwerty section, and you can use them by hitting a key marked with a large dot. If you are on the Today screen this will start you entering numbers for a call and if you are in Word Mobile you’ll start putting numbers onto the screen. 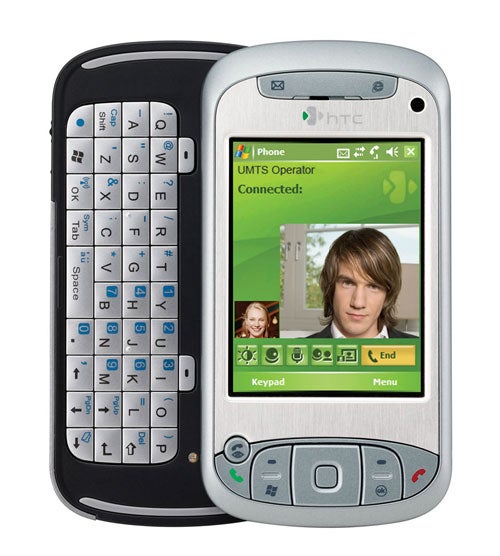 There are a few other useful odds and ends on the keyboard. The same ‘dot key’ can be used with other keys to launch the Windows Mobile file explorer and to ‘page up’ and ‘page down’ though on my review model these two functions seemed to be inverted. It can also be used with another key to toggle on and off the built in Wi-Fi (802.11b and g are supported). Bluetooth is also built in but frustratingly, there’s no keyboard shortcut launch key.


There are a few symbols such as ‘@’, ‘?’ ‘&’ and ‘!’ accessible from the keyboard but no ‘£’. Another ‘dot key’ combination opens the symbols section, where this and plenty of other symbols are hiding. You can feel smug knowing that the ‘$’ also needs to be accessed like this.


Much of the rest of the hardware design will be very familiar to those used to SIM supporting Windows Mobile Pocket PC devices.

Below the screen is a bank of buttons. Call and End buttons are at the far left and right respectively. Centrally located is a large navigation key. Between this and the Call and End buttons on the left and right are two rockers. The upper part of both controls the Windows Mobile softmenus. These are a little out of alignment but don’t take a lot of getting used to. The lower part of the left button runs the Start menu from which you can get quickly to applications and settings. The lower part of the right button provides the OK/back function.


There is a small round button on the left of this collection which takes you directly to the on screen dial pad from where you start both voice and video calls.


There are two more buttons above the screen. These launch Pocket Internet Explorer and the Windows Mobile messaging centre for email, MMS and SMS management.


Also above the screen to the right is the small camera you use for video calls. A larger lens is on the back, and this shoots stills at up to 2-megapixels. Both self portrait mirror and flash are included, and there is a small mechanical switch with which you access the camera’s macro mode. I wouldn’t suggest trying to use this as your only digital camera, but it produces reasonable enough shots.


There are a lot of buttons on the left and right edges. On the left edge is a button that on a short press launches the voice speed dial software (you have to set up tags for this) and on a long press starts a voice recording. The OK/back button works in conjunction with a scroll wheel with up, down and push functions. The two are slightly offset from each other and fall very nicely under the thumb. 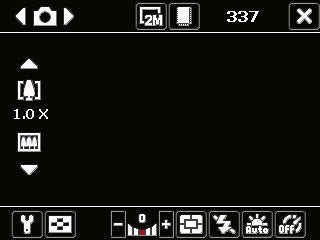 On the right is the power button and Windows Mobile 5.0 Comm Manager launch button. Here you can control Bluetooth, Wi-Fi, your SIM and other aspects of wireless communications. On the bottom of the right edge sits the camera launch button, and when you run the camera the screen defaults to widescreen mode for shooting, offering a range of icons that enable you to access settings around the top and bottom edge.

On the bottom edge of the casing is the infra red port, a battery cover lock and the mains power socket which is mini USB. The device reset button is also here. The stylus sits in a housing on the bottom right back corner of the casing. It is an extending type but only fully extends to a little over 80mm, and is very lightweight. It is disappointing.


The processor in the HTC TyTN, a 400MHz offering from Samsung, seemed well up to the task, and HTC provides 64MB of RAM and 128MB of ROM. After a hard reset I found my review device to have a shade under 50MB of free Storage memory which is not a huge amount. 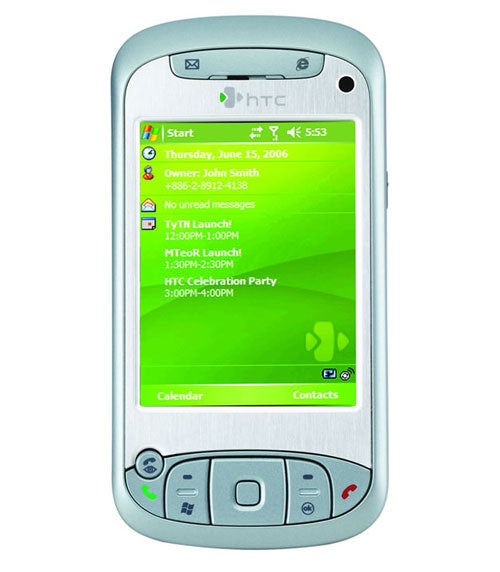 You can expand on this using the awful little microSD cards that I loathe. They are just too tiny and fiddly. The card lives in an unprotected slot on the bottom left edge of the casing. HTC doesn’t provide a card, so one may be your first add-on purchase.

The battery run-down test – looping MP3s with the screen forced on and the SIM turned on too, delivered just under 10 hours of music. In everyday use the TyTN didn’t need charging more than every couple of days, though if you intend to use it as a music player clearly you are going to want to charge daily.


I’d been waiting for a smaller format 3G connected Pocket PC for a long time, and the TyTN lived up to my expectations. It’s neat, tidy, well designed and pocketable. The keyboard works well and it is nice to see the scroll wheel return.

I would have liked a hold button as it is easy to accidentally hit some of the side mounted buttons. A bit more memory either built in or on a supplied card would have been nice too. And the stylus is poor too. But taken as a whole the TyTN brings the Pocket PC format up to date nicely.