Never believe the hype – it’s a saying that I place great faith in, because (most of the time) it’s true. I’ve lost count of the number of times a movie that’s been hyped as the “must see” of the year, complete with fabulous trailers and impressive special effects, has turned out to be a turkey. It doesn’t just apply to movies: it happens in sport (take the Dutch national football side – so often highly rated, so often also-rans), and often in the technology industry too.


Apple is the chief culprit when it comes to hyping its products, but mostly it’s worth putting up with because the end product so often delivers. The iPhone, for instance, was so hotly anticipated you’d have forgiven most people for being cynical upon its arrival. Amazingly, in most respects it actually exceeded expectations. But where that product ultimately delivered on the hype, the HTC’s Touch Diamond – desperately touted in all corners as Windows Mobile’s answer to Cupertino’s belle du jour – sadly, doesn’t. I’ll get my apologies out for delivering the verdict so high up in the review right now, so sorry, but iPhone killer this ain’t.


One of the main reasons it’s so underwhelming is its build quality, which is disappointingly plasticky. You can take or leave the Nokia Prism-like multi-faceted rear panel, but the cheap, shiny finish is about as far from the iPhone’s solid metal build as you can get. Flip the phone over and the theme continues. The flat, flush-to-the-edges screen and sharply-tailored corners are smart enough, but the button panel below the touchscreen again looks poorly finished. Worse still, the four-way directional buttons surrounding the small, circular select key are stiff and often difficult to operate without accidentally pressing neighbouring controls. 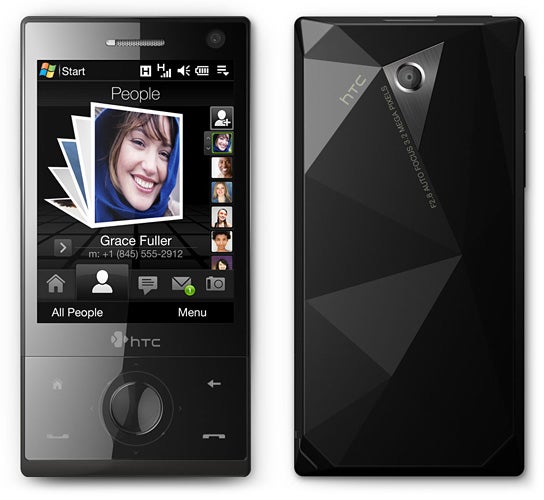 I was expecting more, so much more, from a firm that in the past has delivered such fantastic handsets as the TyTn, TyTN II, S710, and the S730. But next to those phones, the Touch Diamond feels much cheaper.


And it has to be said that the Diamond’s interface – HTC’s new Touchflo 3D – does an excellent job of masking the inadequacies of the Windows Mobile front end. So much so, that if you didn’t know its background, you’d initially think it was a pretty slick phone. It’s certainly a big improvement on the original Touch’s thin veneer.

When it first fires up, you’re confronted with a nifty clock display with numerals in the style of a flip-number calendar, and a summary of recent missed calls and approaching appointments below it. Along the bottom, in a strip, are shortcut icons to access other enhanced pages. The only remaining remnants of the Windows Mobile Today screen run along the top and bottom edges, with the familiar start menu and status icons at the top and context-sensitive soft keys at the bottom. Naturally, everything here can be navigated with a flick of the finger on the Diamond’s hard surface screen.

It’s not just the Today screen that’s had the Touchflo treatment, however. There’s slick new styling elsewhere too. On the contacts screen, pictures or silhouettes of people you call regularly are presented in a Rolodex-type graphic – again navigable with a sweep of your pinky. Text messages fly in and out of the screen as you scroll through them, and the first few lines of the latest email appears as a letter poking out of an opened envelope. Fans of the HTC weather display won’t be disappointed either – it’s here again in all its glory, this time equipped with fancy transition animations.


The input methods are as good as ever, too, with a choice between traditional T9 entry, a compact 20-key QWERTY layout like the physical one available on the Touch Dual (or Touch Plus on T-Mobile), plus a full-sized one-letter per key QWERTY keyboard for when predictive text isn’t appropriate. All the keypads are sensibly designed and remarkably easy to use, and as a result I found entering text on the Diamond easy and stress-free, especially when using the 20-key QWERTY pad in predictive text mode. 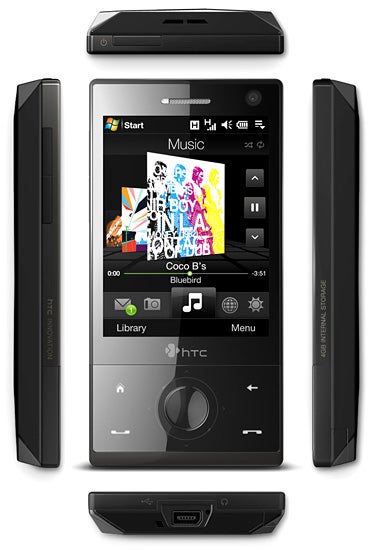 It’s a similar story for pictures and videos, which also see a big finger-friendly boost over the dour Windows Mobile effort. Even the music application is a world away from Windows Media Player’s horrible interface, with album art on a rolodex-style front-end and an iPod Touch-style navigation of your music library underlying it. The settings also get the glossy, iPhone-esque treatment: ringtones and sounds, and communications settings, for instance, are available without having to delve into Windows Mobile’s confusing menus.


It’s the best all-round effort at hiding Microsoft’s interface away that I’ve yet seen, and its best feature is yet to come. Included with the Touch Diamond is a tweaked version of Opera Mobile that, incredibly, rivals the iPhone’s Mobile Safari browser for usability. You can’t use a pinch of the fingers to zoom in and out, sure, but it operates in a largely similar way to Safari, presenting a zoomed out view of a page initially and then allowing you to quickly zoom in and out (here with a double tap) then pan and push the page around with your finger. In fact I found the page rendering engine to be slightly more reliable than the iPhone’s on some tricky websites. I visited a number of sites that didn’t quite appear perfectly on the iPhone and the page was spot on with the Diamond.

There’s even some good news on the hardware front: the stylus (for the rare occasions you need it) is magnetised and snaps away beautifully into the bottom right corner. Take it out when you’re on the phone and you can even set it to launch the notes application automatically – a nice touch. The phone also has accelerometers inside that sense when the phone has been flipped into landscape mode. There’s even an addictive little game on board that takes advantage of these sensors – called Teeter: you tilt the phone to roll a ball around a maze, avoiding dropping it in holes along the way. 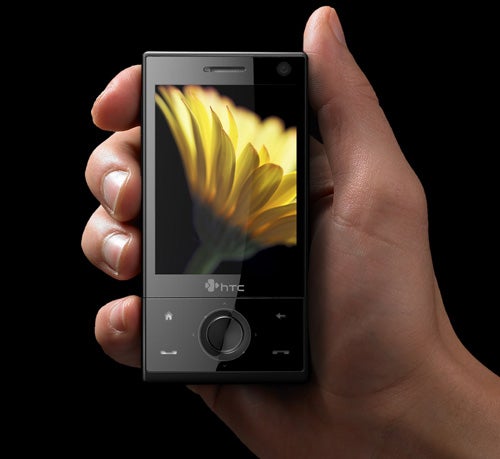 And there are all the usual high-end HTC bells and whistles when it comes to hardware too. You get tri-band GSM, HSDPA with support for speeds of up to 7.2Mbit/sec, Bluetooth 2.0, 802.11bg Wi-Fi and, of course, a GPS receiver. There’s a 3.2 megapixel camera on the rear (though this isn’t much cop – focus is hit and miss to say the least) and a VGA one on the front for video calls. Under the hood is a 528MHz Qualcomm processor, plus a healthy dollop of RAM (192MB) a decent 256MB of ROM and another 4GB of internal storage too, which will be good for a fair few photos, video clips and music files. 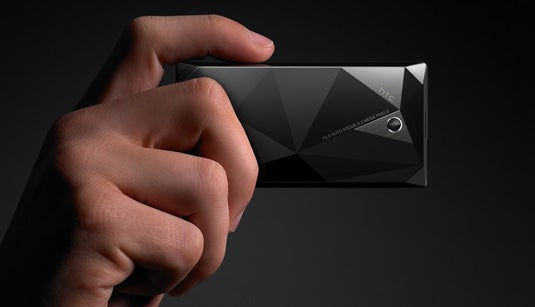 However, you still don’t have to dig very deep before Windows Mobile starts to surface – it’s a tad disappointing that you have to get the stylus out to set the alarm, for instance, and clicking appointments launches the usual boring style-free Windows display. HTC’s Touchflo 3D is also far from perfect. Foibles include no easy way to turn of the alarm when it goes off – the only way I managed this was to poke the narrow status bar at the top, then press the notification icon on the following screen, then dismiss the alarm – hardly what you want when you’re half-awake at 6am. HTC’s latest software is also far from 100 per cent stable. I had to restart the phone at least once a day because it simply froze and refused to get going again.

And there are other, more serious problems here. The main issue is performance. In adding all these extra whiz-bang features to Windows Mobile, it seems that HTC has seriously compromised the Diamond’s responsiveness. I expected the 528MHz processor to absolutely fly, especially with Windows Mobile 6.1 Professional at the helm and a whopping 192MB of RAM, but I was all-too-often left twiddling my thumbs waiting for it to respond. Battery life is impressive from a pretty low-capacity 900mAh lithium-ion unit, but one-and-a-half to two days with light use is still a long way from being completely acceptable. And the phone also runs amazingly hot – after a brief five minute session browsing the web at HSDPA speeds, the rear panel was starting to make my fingers sweat. 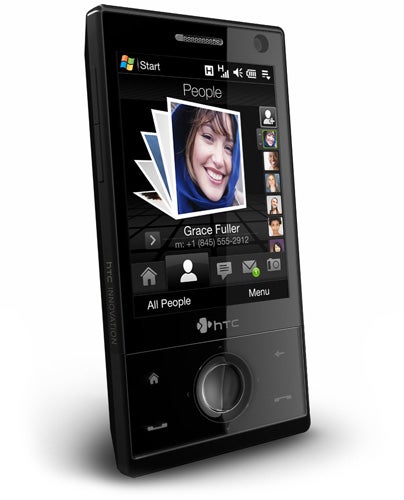 Further disappointment comes in the shape of HTC’s proprietary ExtUSB headset/headphone connection – you’ll have to buy yourself a converter if you want to use anything but the rather rubbishy wired stereo headset included in the over-engineered pyramid-shaped box. In a phone that wants to challenge Apple’s finest, this is a major oversight.


Most unusual of all, however, is that there’s absolutely no way to expand the memory in this device. While 4GB may be a generous inclusion, surely you’d want to give owners the option to quickly transfer large files and install memory hungry applications, such as sat-nav software, without compromising the phone’s media storage capacity. But there’s no microSD slot anywhere to be seen.


The Touch Diamond packs in a lot of features and is a good effort by HTC to rival the iPhone’s touchscreen usability while retaining the power and extensibility of Windows Mobile. But despite the hype, the Diamond is distinctly half-baked.


Granted, the Touchflo 3D works better than ever to turn Windows Mobile into a genuine phone interface. It hides the ugly-duckling Windows interface away successfully, and browsing the web on HTC’s version of Opera Mobile is fantastic. But as a complete package, the Touch Diamond just doesn’t convince. Not only does the build not reach the standard set by the iPhone or even the previous generation of HTC Touch phones (this is especially disappointing given the £400+ price tag), but the performance is laboured and the software not entirely stable.