As we have seen with the
HTC Titan, the Taiwanese manufacturer is certainly betting on the
fact that WP7 has a bright future. While the Titan is the flagship
model in the new Mango line-up from HTC, the Radar is very much the underling.

On first viewing the HTC
Radar looks a lot like a run-of-the-mill Android phone which HTC has been producing in the last couple of years. Part Desire, part Wildfire,
the design of the Radar is completely underwhelming. 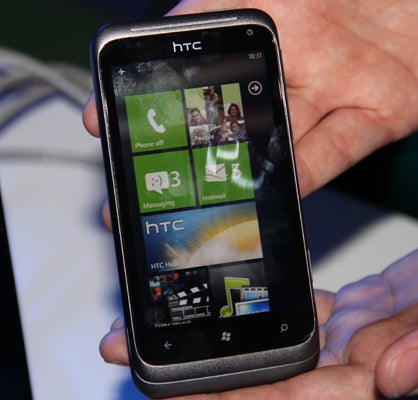 The Radar has a 3.8in LCD
touchscreen with a WVGA resolution of 480×800 pixels. This makes for a nice
bright display though viewing angles were only average, and certainly not as good
as those on the Titan. Moreover, the 480×800 resolution is the minimum require by Microsoft for its phones, so why HTC didn’t go for a better screen on either the Radar or Titan is perplexing.

The phone measures 120.5 x
61.5 x 10.9mm, though in the hand it certainly felt a lot chunkier. It weighs 137g and felt solid and
comfortable while we were handling it – which owes much to the aluminium unibody
design.

Below the screen sit the
ubiquitous WP7 buttons, which in this case are capacitive touch sensitive, and a rather large ‘triple-chin’ bezel which
does nothing for the look of the phone. Above the screen sits a VGA-quality
front-facing camera for soon-to-be supported Skype video calls.

Looking around the sides,
the left-hand-side is home to a microUSB port for charging while on top there is
a 3.5mm headphone jack and the power button. Meanwhile the right is home to the volume
rocker and the physical shutter button for the camera.

The rear of the phone is a
three-tone effort we’re used to seeing on HTC’s Android devices with a five megapixel
camera sitting between an LED flash and a speaker grille.

The camera has the same f2.2
aperture lens with backside-illuminated sensor we saw on the Titan, and if
anything the low-light performance on the Radar was better than on the larger
device, giving bright, clear results in pretty dark conditions.

Backing up the hardware are a
couple of new shooting modes, Panorama and Burst Shooting. Both are very easy
to use with only one press of the shutter button needed for both and on-screen
guidelines telling you where to point the camera. 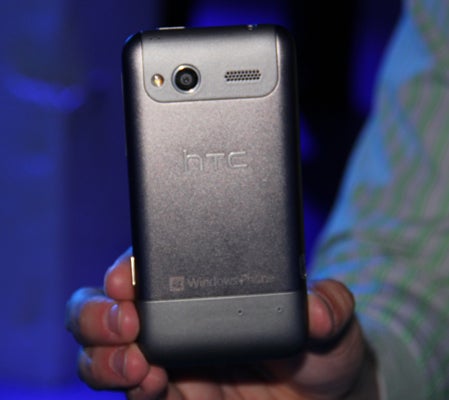 Looking at the interior of
the phone, it is powered by a 1GHz Qualcomm Snapdragon processor backed-up by a
rather measly 512MB of RAM. Internal storage of 8GB is available but no possibility
of expansion via microSD card. The Radar has a 1520mAh battery promising up to
10 hours talk time – though we’ll have to wait for the full review to check that
out.

As we said with the Titan,
the Mango software experience will be pretty uniform across all new WP7 devices,
thanks to Microsoft’s strict guidelines. They have allowed a couple more
pre-installed apps from manufacturers this time round though, and HTC is hoping its
offerings will help differentiate it. 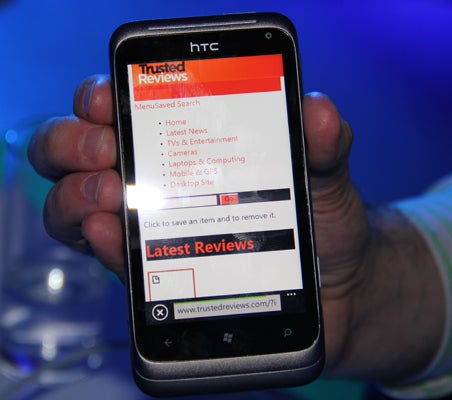 The two most prominent apps
are the updated HTC Hub and the brand new HTC Watch. The Hub is where users can
go to get all their social networking updates in one place, plus news, stock
market prices and much more. It’s a slick app, though we did notice a delay in
the content loading, which could be down to the lack of RAM (though admittedly the Wi-Fi connection at the launch event was not lightening fast either).

HTC Watch, which we first
saw on the Sensation, will give users of the Radar access to thousands of TV
shows and films, but how many will want to pay for the films to watch on the 3.8in
screen is debatable. 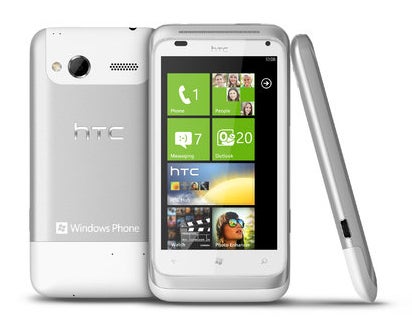 The Radar, which will come in Active White or Metal Grey, is a phone which
has all the basics in place: decent screen, five megapixel camera, WP7 Mango
software and a nice aluminium unibody feel. The problem is that we’ve seen
this dozens of times before with Android and 1st gen Windows Phone handsets and the Radar looks as if it’s
12-18 months out of date. Add to that the slowish processor and low RAM, and it
could be a phone that slips under many people’s Radar.