The much-written-about HTC Touch has been the subject of many a heated debate among followers of the smartphone industry in recent weeks. Some love it, others (including our very own esteemed editor) are not so keen.


But one thing is clear: it is a departure for the firm that doesn’t quite work, and it is one that certainly won’t do what it was originally intended to do – which was run the Apple iPhone juggernaut off the road, or at least give it a bloody nose. And, on top of all that, overlaying a simple touch-driven interface on top of Windows Mobile isn’t the revolution we were hoping for.


The new P6300 smartphone (around £400 SIM-free) represents a return to business-as-usual for HTC and anyone expecting iPhone-rivalling fancy pants features will be sorely disappointed. This is, pure and simple, a Windows Mobile-based PDA phone with no fancy extras, aimed at business or corporate users.


And that’s exactly what it looks like when you pull it out of the box for the very first time. It’s grey and unassuming, more accountant on an audit than advertising executive on a brainstorming session. It doesn’t look particularly cool, but it goes about its business in an understated sort of way. 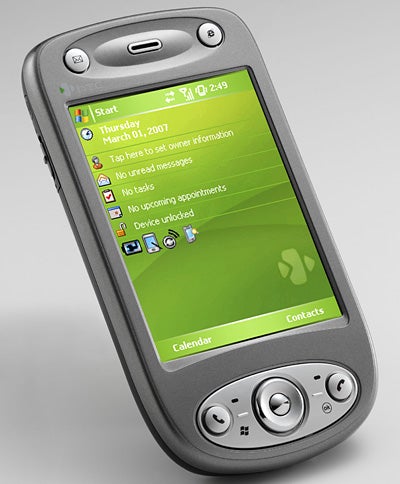 The front is dominated by a large 3.5in, 240 x 320 resolution screen surrounded with some sensibly arranged and simple buttons. Above it are shortcut keys for messaging and Internet applications. Below it are the usual smart phone controls for picking-up and hanging-up calls, while a pair of soft buttons and a Windows Start button flank a D-pad, used for navigating Windows Mobile’s often complicated and cluttered screens.


The edges of the P6300 are, thankfully, just as uncluttered. On the right hand edge you’ll find the stylus stowed away and a shutter button for the two megapixel camera. On the left is a rocker for the volume plus a key for accessing the device’s voice control centre. This can be used to launch applications or phone speed dial contacts and it works really well – as long as you don’t mind people staring at you in the street as though you’ve just escaped from Broadmoor.


On the top edge is the power switch and an SD memory card slot and at the bottom, a rather odd-looking hybrid mini-USB socket – used for syncing, charging and for connecting the proprietary hands-free headset supplied in the box. And though confusingly it looks different to a standard mini-USB socket, this ‘ExtUSB’ socket will in fact still take standard cables, so you can use your power cable in the car, or spare USB lead at your desk in the office to charge it. And, while I’m on the subject of box contents, the P6300 comes with a USB wall wart charger and a quality belt clip case as well.

Despite the fact that the P6300 has most things a power user is likely to need in a smartphone – there’s Bluetooth 2.0 and 802.11g Wi-Fi built in – there are some notable omissions. Most noticeably the P6300 doesn’t have the sliding keyboard that the HTC S710 and P4350 employ to great effect. This is despite being both larger and thicker than both – it measures 129.7 x 69.8 x 18.8mm – and the lack of keyboard hampers both the writing and editing of documents and emails. No matter how hard Microsoft tries with its handwriting recognition and various other methods of touchscreen text entry, it just can’t compete with a halfway decent keyboard – even a really small one.


The P6300 also lacks 3G. So the potential for browsing the Internet at speed while you’re out and about is restricted too. Also disappointing is the fact that the P6300 still uses Windows Mobile 5.0 rather than the latest 6.0 version. And there are no other extras either, such as GPS.


But, with all of that taken into account, there are some positive things to say about the dowdy P6300. First, although it does lag behind in terms of the version number, HTC has included compatibility with Microsoft’s Push Email here and includes Microsoft’s Mobile Office Suite with Word, Excel and PowerPoint in addition to the standard specification as well. 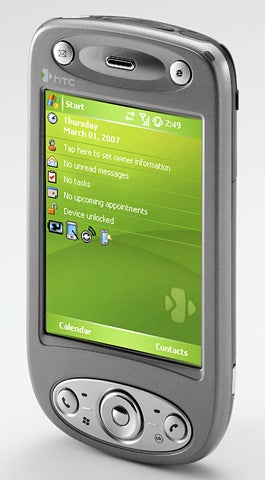 Second, the 400MHz Samsung processor that powers the whole shebang seems to be very nippy, which is not something you can say about all Windows Mobile smartphones. Click the power switch and it starts up in just a few seconds from cold – no hanging around – while start-up from standby is instant. Launch an application and it pops up straight away, with no spinning Windows graphic to stare at in growing desperation.


And third, battery life is excellent. After two days of occasional use as a phone, during which time at least two hours were spent connected to the home and office Wi-Fi connections, and leaving it in standby the rest of the time, the battery gauge was still displaying 60 per cent remaining. That’s better than I usually get out of my ageing Sony Ericsson K800i.


Ultimately, though, I suspect that the only people who will be really interested in the HTC P6300 are IT managers specifying smartphones for their mobile workforce who want to give their users a reliable way of accessing Push Email and the facility to read and edit office documents.


I say this because there’s no killer feature to lure consumers to the P6300. It’s not particularly sexy. It’s not small or slim. And it isn’t particularly innovative. But, like the accountant mentioned earlier, it does a job and it does it competently.