When HTC brought out its connected Windows Mobile PDA, the TyTN, it was generally greeted with very positive vibes. I certainly rather liked it when I reviewed it back in July last year. The TyTN’s stand out feature was a keyboard that slides out underneath its long edge.


A bit later last year Riyad came out in favour of Orange’s incarnation of the TyTN, the SPV M3100 and again the sliding keyboard was an important factor.


Now the sliding keyboard is back, but the P4350 doesn’t quite have the wow factor that the TyTN and SPV M3100 did, because it is rather less than leading edge in some other respects. 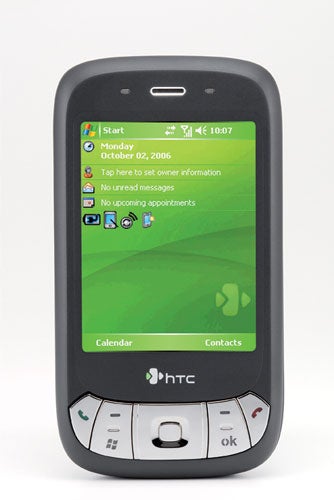 The most notable problem is that the P4350 is Quad-band GSM but lacks 3G. Given that Windows Mobile connected Pocket PCs are ideal for Web surfing and that the keyboard makes mobile email more attractive, the absence of 3G speed really bites. Bluetooth and Wi-Fi are both here, but there is no infra red.


This PDA is based on Windows Mobile 5.0 for Pocket PC Phone Edition. This has recently been surpassed by Windows Mobile 6. I expect the two versions of the OS to sit side by side on products in the market for a while, so this doesn’t immediately make the P4350 a poor choice. But there are some important improvements in Windows Mobile 6 and without them you aren’t getting the best available experience.


This Pocket PC takes a standard approach to design in that the front controls are underneath the screen while several additional controls sit on the left and right edges. 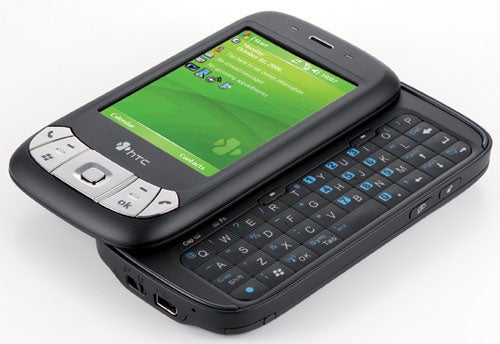 On the left side there is a volume rocker and a button that activates the built-in camera and can then be used to shoot images. On the right is a shortcut button to the Windows Mobile Comm Manager for controlling wireless communications. A short press of this starts voice control software while a longer press lets you make a voice recording.


The front buttons are large, flat and frankly, ugly. They are all very easy to hit and are responsive enough but I just don’t like the look of them. Call and End buttons are on the far outside edges, with a navigation key in the centre and soft-menu rockers with OK and Start Menu functions in-between.


The P4350 is rather heavy at 170g, and you’ll be aware of its presence if you carry it in a pocket. Its ‘footprint’ is in keeping with the current crop of Pocket PCs though. It measures 109mm tall and 59mm wide, not much taller than many ordinary phones and not a huge amount wider.

It is 17mm thick, which makes it barely any thicker than O2’s XDA Orbit and T-Mobile’s MDA Compact III, which I reviewed together earlier this year and it is remarkable that it can accommodate a keyboard.


The good news is that the keyboard is very positive to use. You wouldn’t want to write long documents with it, but it is perfectly fine for email, SMS creation, or a little bit of document editing. The individual keys are just about as large as they could possibly be given the available space and they fit nicely under both thumbs when holding the P4350 in two hands. 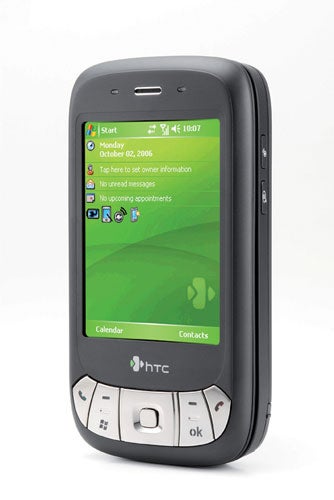 Two tiny soft-menu keys sit above the QWERTY row. There is no separate number row, but numbers are embedded onto the keys. Those keys that don’t offer a number have a symbol or function instead, and to get any of these you hold down a control key.

There are key combinations for opening up the Comm Manager so you can quickly get to Bluetooth and Wi-Fi, for going to the Windows Mobile File Explorer and for opening up a picklist for the full range of symbols. One of the symbols you’ll need this for is ‘£’, but then neither ‘$’ or ‘€’ are on the main keyboard either. There’s a neat way of accessing the kinds of characters you need for words like fête. You type an ordinary ‘e’ then use the function key and space bar to cycle through alternative characters till the ‘ê’ appears on screen.


When you slide the keyboard out, the screen automatically reorients itself into landscape format and emits a little trilling noise as it does so. Close the keyboard up and the screen goes back to portrait format – with another accompanying mini fanfare. When you want to flip the screen without sliding out the keyboard, there is a tappable icon on the Today (main) screen that does the job. 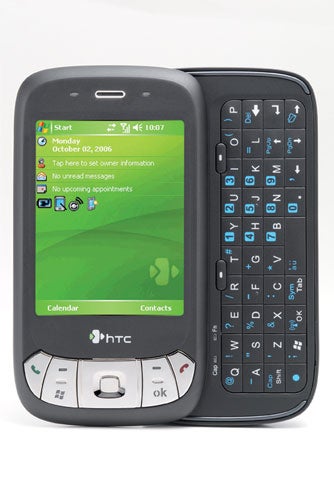 After a hard reset the P4350 reported 37MB of free storage memory for your own data and applications. This should be enough for most people to get going with calendar and contacts synchronisation and to get working with mobile email. If you find you need more, for example if you want to store large files such as music on the device, then there is a microSD card slot on the left side of the casing, protected by a soft rubber cover.


The 2-megapixel camera does a reasonable job outdoors but was very poor when used indoors. The photo of the coloured dish, taken under normal household lighting and with automatic settings, is way off the mark. The background should be white and some of the colours on the dish are just wrong. 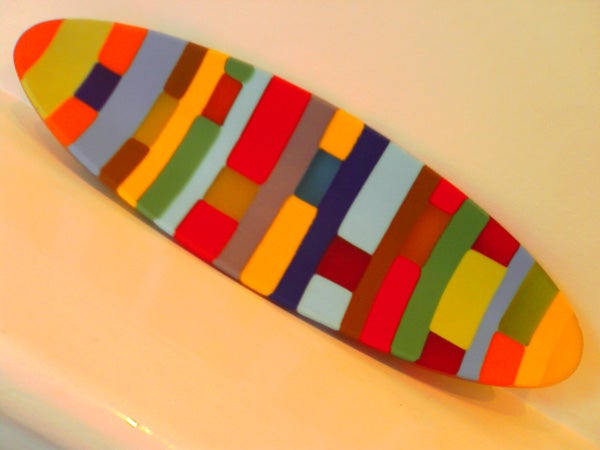 Battery life proved to be pretty solid. I got six hours 40 minutes of non-stop music played from a microSD card with the screen forced on. This is not exceptional, but it is not poor either.


HTC has made some very impressive Pocket PCs. The P4350 is not one of those, being in most respects average, in others below par. The keyboard is its star attraction but on its own it is not enough to sell this Pocket PC to me.