The HTC One Max’s most eye-catching feature is the fingerprint sensor on the phone’s back. This is just the second super high-profile mobile to use such a sensor, having been implemented in the iPhone 5S.

Is this just a ‘me too’ effort, or something worthwhile? We don’t think too much of it.

The HTC One Max uses a capacitive sensor that maps out the conductive properties of your digit – it’s a fingerprint, but not one of curvy lines and an optical CSI-like image. Unlike the iPhone 5S you have to run your finger across the sensor rather than placing your finger on it. If you haven’t used the iPhone’s sensor before, you simply need to place your digit onto the Home button to unlock the phone. 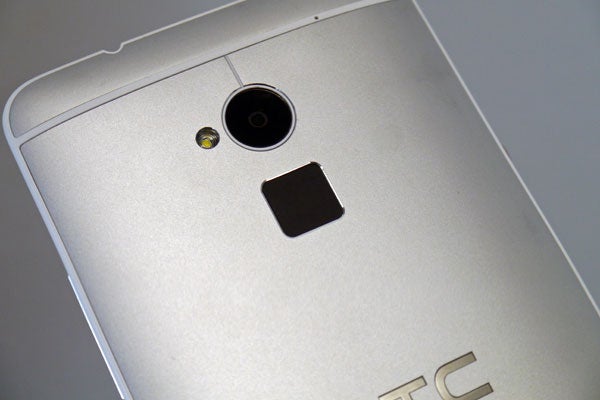 Although the security of fingerprint sensors like the HTC One Max’s have been discussed at length, what they are really about is convenient. And the Max’s one isn’t.

More often than not, the HTC One Max failed to correctly recognise the finger, and it forces you to enter a pre-determined password after three attempts. It’s not a finger-friendly password either, but a keyboard-entered one.

Part of the issue is that for the sensor to accurately map your finger, it needs to pass straight down the middle of the sensor panel. That you’re always doing so ‘blind’, and that the phone isn’t the easiest to wield at the best of times makes this easier said than done in real-life use. You shouldn’t have to try to use something like this.

HTC has done its best to make the One Max’s sensor more useful than the iPhone 5S’s, though. It can be used from the lock screen to launch any app you fancy, rather than just unlocking the phone. And you can ‘train’ the phone to recognise three different fingers.

It’s a great idea, but it highlights two more problems. First, you can’t use it outside of the lock screen – even though it would make sense as a quick app launch function (it’s far too high up the body to be swiped accidentally). Second, only your index fingers are remotely comfortable to use with the sensor thanks to the size of the phone. Swapping hands to launch a different app once again wipes out the convenience benefit.

The fingerprint scanner is ultimately a misfire.

The HTC One Max has a 5.9-inch 1080p screen. That’s the same resolution as the 4.7-inch HTC One, stretched over a much, much larger area.

However, sharpness remains excellent. The mobile phone market is currently a bit obsessed with the pixels-per-inch rating of screens, and in this sense the HTC One beats the Max – with 468ppi to the Max’s 373ppi. Like most obsessions, though, it’s not healthy. There’s little different in perceptible sharpness between the two phones. 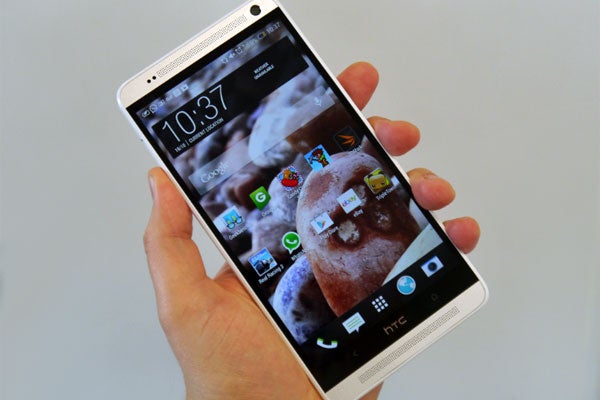 The HTC One Max uses an LCD-type display, and it’s a good-quality panel. Contrast is good, black levels are decent and colours are fairly vivid without oversaturating reds in the way AMOLED screens like the Galaxy S4’s often do. They do appear slightly cooler than the very best screens out there, though.

That a phone this high-end has a great screen is no surprise. Phones and tablets currently lead the way in terms of screen development, having pushed public expectations much more quickly than TVs.

A more interesting question to ask is – does the size of the One Max’s screen add that much?

In day-to-day use, we found the 5.9-inch screen to be more of a pest than a bonus. It makes navigating the phone and typing one-handed a pain, and HTC hasn’t done a great deal to force the HTC Sense UI to make the most of the screen inches.

When it is a blessing, though, is while playing games, browsing the web or watching film. Playing Real Racing 3 is so much more immersive on an HTC One Max than an iPhone 5S. It’s much closer to playing a game on a small tablet like an iPad mini or dedicated gaming device like a PS Vita – and without anywhere near as much of the inconvenience of a tablet.

As we half-expected of a phone this large, top brightness isn’t quite on-par with the HTC One. However, as there’s a solid anti-reflective coating on the One Max’s display, we never found outdoors use to be much of a problem.