The HTC One Max is the third phone to use HTC’s UltraPixel camera. But what exactly is UltraPixel technology all about?

The term ‘UltraPixel’ is just an HTC marketing term, but what it refers to is genuinely interesting. Rather than bumping-up the megapixel count to produce a more impressive-sounding camera, the HTC One Max decreases the number of megapixels in order to result in larger sensor pixels. 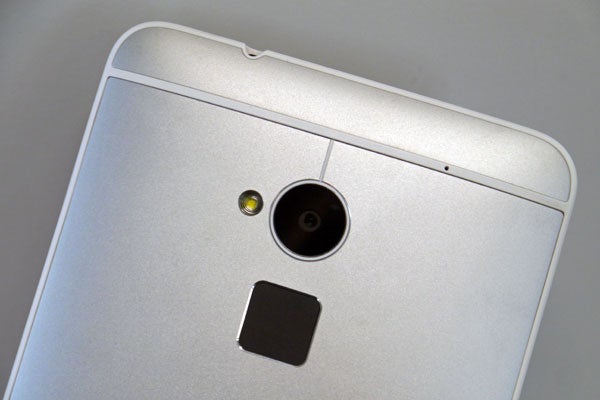 Detail is sacrificed, but you get superior low-light performance and improved dynamic range. For the spec-heads out there, the HTC One Max uses a 1/3-inch sensor of four megapixels, resulting in sensor pixels of two microns a piece – much larger than the Galaxy S4’s 1.1-micron pixels. The lens has an f/2.0 aperture, which is among the fastest you’ll find too.

Let’s see how the UltraPixel trade-off pans out.

Detail and Exposure
At pixel level, it’s very clear that the HTC One Max is incapable of capturing anywhere near as much detail as the competition. A four-megapixel sensor can only do so much. 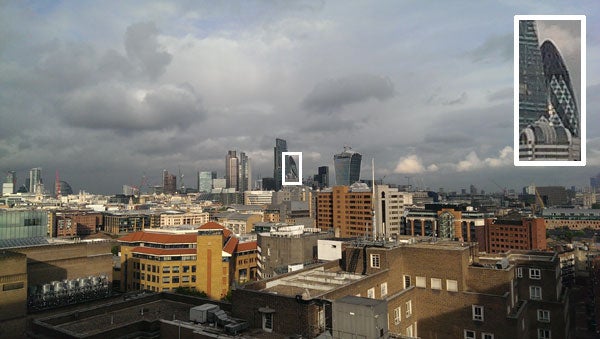 A solid photo, but not one that holds-up to zooming-in 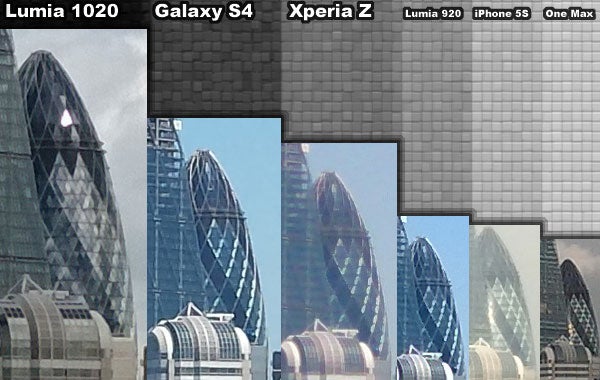 The One Max’s camera is one of the least detailed in its class at 1:1 pixel level

However, the HTC One Max is a pretty reliable snapper. Dynamic range is well above average when using the normal shooting mode, making your photos appear (from a distance at last) detailed and vital even when the day is a bit… miserable.

Photos do get particularly noisy towards the edge of the frame, though. In short, don’t expect to be making a poster out of your HTC One Max photos – they’ll look rubbish.

Depth of Field
Shallow depth of field effects are the best way to produce arty-looking photos without spending much time setting up a shot. A good camera will be able to blur-out the background of an image to make the subject ‘pop’ all the more. It’s so effective that some phones have started using fake shallow depth of field modes to mitigate the limitations of their cameras.

The HTC One Max is capable of above-average shallow depth of field effects. It’s not quite the superstar bokeh (that’s the blurry effect) performer that the 1020 Lumia is, but it is superior to the Galaxy S4 and iPhone 5S in this respect. The film-like grain that’s seen across the phone’s photos helps to add to the artsy vibe too. 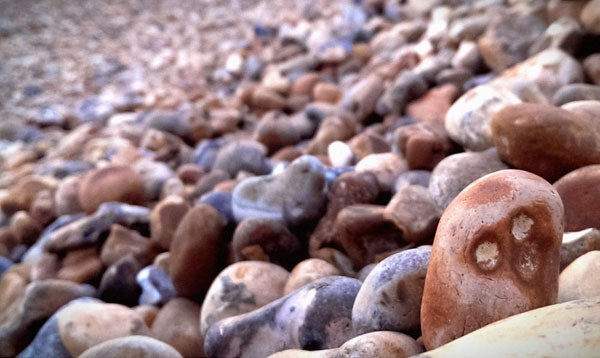 HDR
High dynamic range is a mode that merges multiple photos at different exposure levels. Automatic HDR modes like the HTC One Max’s take these shots in very quick succession so that you don’t need to use a tripod as long as you have a steady-ish hand. It’s dead easy to use.

HTC’s HDR mode is extremely effective in most conditions, largely avoiding the cartoonish effect of some other phone marker’s attempts. It’s even more effective than Samsung’s too. 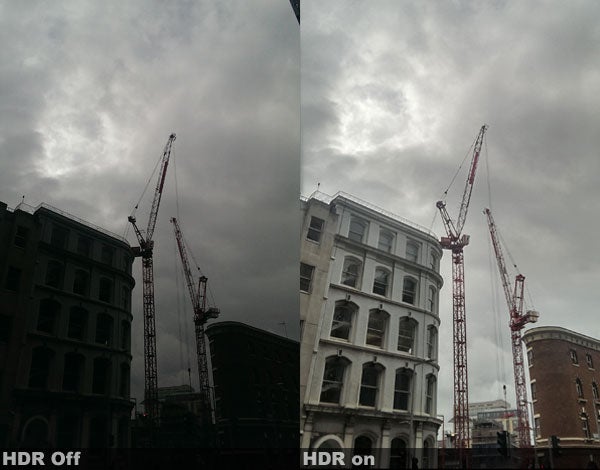 However, it’s so aggressive that we wouldn’t recommend it for everyday
shooting. The effect is just that bit too strong, taking away your
ability to use shadows as part of a photo’s composition.

It also has a
habit of overexposing areas of an image – it’s more concerned with
revealing shadow detail than solving overexposure in skies (which can
also be fixed with the best HDR modes). The overall level of exposure is raised, meaning it’s not much good for ‘cooling down’ bright skies. 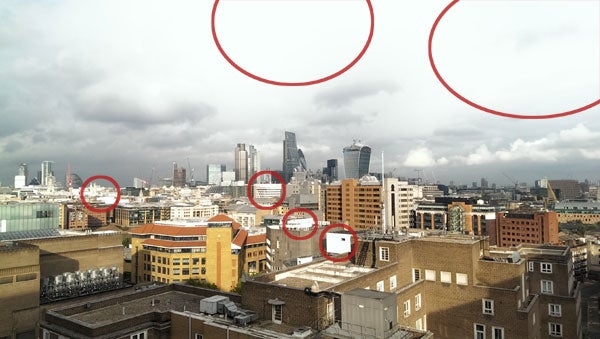 …but sometimes it just causes overexposure

The Max’s shot is not dramatically less noisy, but white balance is far better. Colours are spot-on with the HTC One, while they’re a way off with the original HTC One. We imagine this is likely to be an improvement of HTC Sense 5.5, or another sequential upgrade our HTC One hadn’t received yet, but it’s good news regardless. 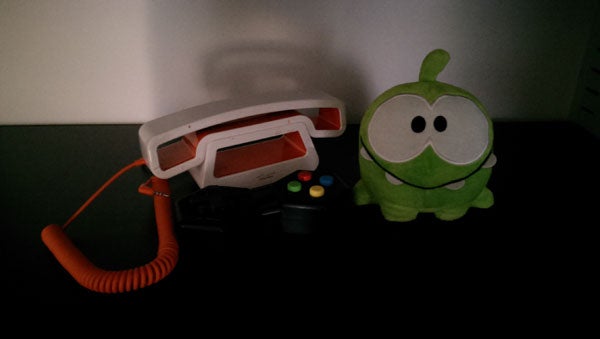 As we’d hoped, low-light performance is good. (shot without flash in a dark room) 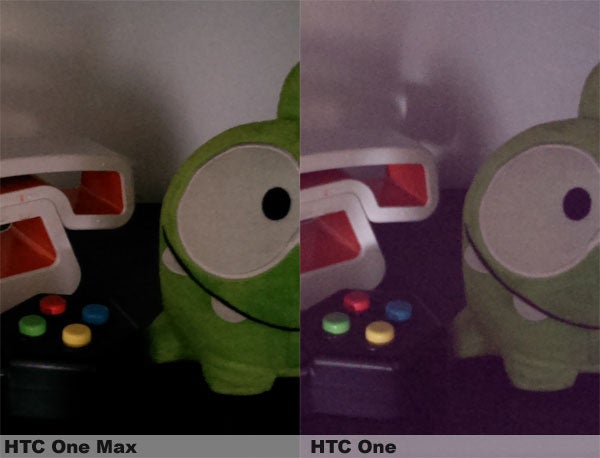 In fact, it’s significantly better than the HTC One (update may fix this)

To give some context to these shots, phones with middling or poor low-light performance leave the scene very dark, with ill-defined objects.

Performance and Camera
The HTC One Max’s camera app is mostly a joy to use. It’s simple, with an almost bloat-free interface. There are no unnecessary visuals here – as seen in Samsung’s Galaxy phones.

It also puts the most commonly-used features at your fingertips. ‘Normal’, ‘Night’ and ‘HDR’ modes are right up at the top of the menu system (and are the ones we use most). As we found with the HTC One, Zoe mode is given undue prominence – HTC is pretty proud of it. However, as we found with most of Samsung’s more involved modes, most people probably won’t use it.

Zoe captures a sliver of video along with each photo, letting you create little animated montages of your daytrips (etc. etc.). However, it also ruins the immediacy of the camera, and gives much less satisfying feedback for each picture taken. 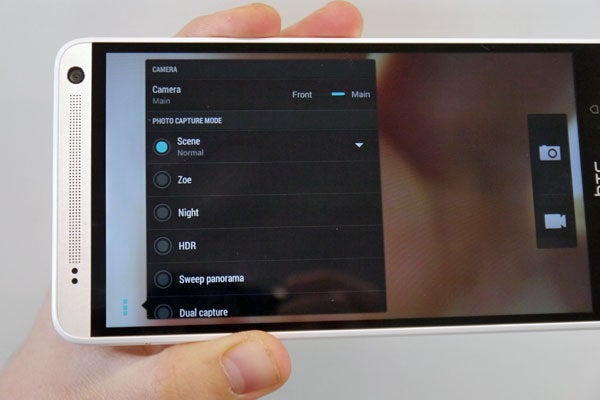 We’ll be blunt – we don’t get Zoe. As cute as some of the results produced by HTC’s marketing team might be, we don’t find it satisfying to use in the real world. It’s for real show-offs only – part of HTC Sense 5.5 is that it makes your Zoe video montages easier to share online.

Use the more traditional modes, though, and shooting is a joy with the HTC One Max. Focusing is fast in anything but terrible lighting, there’s no significant shutter lag and the delay between shots is tiny. As much as we love the Nokia Lumia 1020’s camera for its superior image quality, this one is a whole lot faster.

Creative Modes
Like the iPhone 5S, the HTC One Max gives you easy access to a bunch of creative filters. You get the standard colour filters, as well as more dynamic ones that create a fisheye and mosaic effects.

Video Capture
The HTC One Max can capture decent-quality video, but it doesn’t make it one of its key features. We’ve started to see phones that can take 4K video, but the phone makes do with 1080p. Given how few people own a 4K TV (or will own one in the next two years) it’s not something to mourn.

It does have video HDR, though, which applies the same principles we saw in HDR stills to video. It’s a great feature, and a sign that this is a top-end phone, but we found the results to be a bit flickery-looking when dealing with changes between bright and dark areas.

Front Camera
As well as a feature-rich main camera, the HTC One Max has a decent front camera. It’s a 2-megapixel f/2 sensor that shoots video and stills at 1080p resolution.

It employs pretty serious noise reduction that leaves images looking heavily processed. However, it is good fun. There’s an HDR mode for the front camera, and you can apply the same sort of ‘live’ creative filters you have access to with the rear camera.