The 8-megapixel camera on the Desire 610 is reasonable for a phone at this price and certainly trumps the Moto G’s 5-megapixel one.

In well-lit conditions, like the sunny day we were testing the camera with the help of the London skyline, the Desire 610 does well. Colours are accurate and it captures enough detail from the distant Gherkin building. Edges are a little fuzzy, but overall quality is decent for a phone camera. 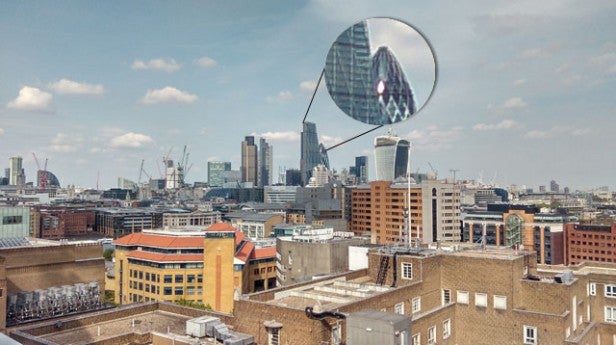 Compare it to the Moto G photo taken just a few minutes earlier and the difference is striking. Clouds are more clearly defined on the HTC Desire 610, colours much better and there’s a lot more detail – look at the building in the centre of the picture and you’ll notice that the latticework of metal is much clearer than on the Moto G. 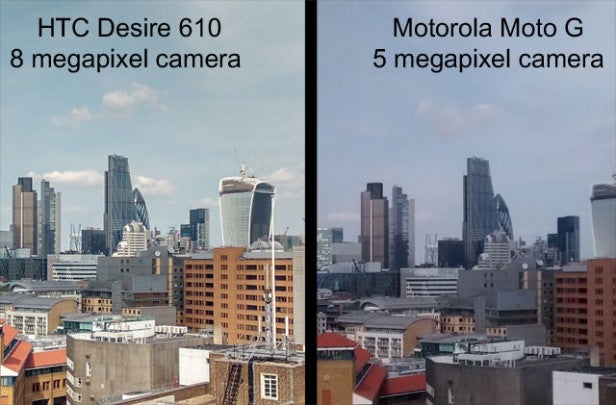 Closer up the HTC also does a decent job, although it does struggle with the opulent purple flowers we shot. As you can see when we blow up the picture to its full size, the flowers look a little flat and the colours are patchy. We’re nit-picking a bit here though; it’s unlikely you’ll be viewing these images at full size. 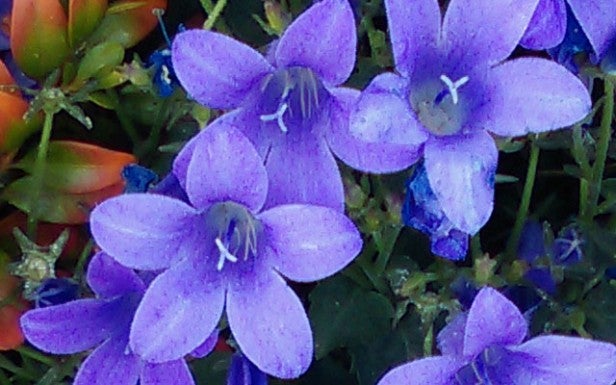 HTC’s camera app is dead simple to use. While you don’t get all the bells and whistles you’ll find on the HTC One M8 or Samsung Galaxy S5, the HTC Desire 610 is perfectly suited for some happy snapping.

You can also shoot full-HD video with the camera with good results. We were able to shoot some decent video footage even during a bumpy car ride.

The 1.2-megapixel front camera also does a good job in well-lit conditions. Video calling and the occasional selfies work well. You even get a timer in selfie mode so you can set yourself up just right for the perfect duck-face. Or not.

Both processors are evenly matched in our benchmark tests with the S4 mini performing slightly better than the HTC in Geekbench 3 (1,099 vs 1043), whereas the HTC Desire 610 wins in the 3D gaming benchmark with a score of 4,871 vs 4,783 in Futurmark’s Ice Storm Unlimited test. These are tight margins, however, that you probably won’t notice in real-world use.

In use the HTC is zippy enough when scrolling through menus and opening apps. If you like intensive 3D games you might want to opt for a more powerful phone, though. We experienced some slow-down on some intensive 3D games such as Dead Trigger 2 and Asphalt 8, although both were quite playable for the vast majority of time. If you don’t play games on your phone, or your gaming is limited to 2D puzzlers, then you’ll have no problem at all and will appreciate the experience on the 4.7-inch screen. 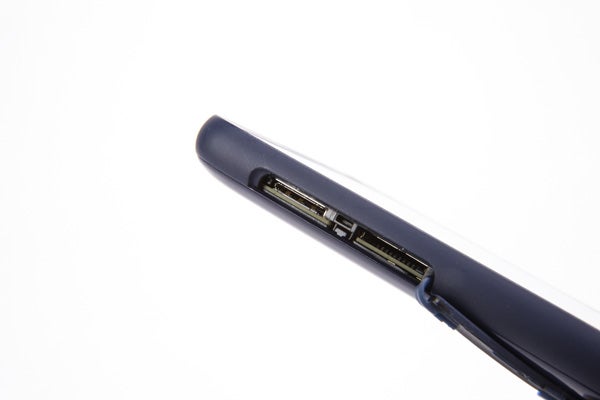 You’ll need a nano-SIM, like the one found in the iPhone 5S and 5C to connect your Desire 610 to a network. Once you do the HTC lets you connect to the internet using speedy 4G. You also get the standard Bluetooth 4.0, Wi-Fi (802.11 b/g/n) and NFC.

Onboard storage is just 8GB but the microSD slot hidden behind a flap accepts cards up to 128GB in size – more than enough for the vast majority of users. The only other connector is a micro-USB 2.0 port for charging (not MHL compatible).

The Desire 610 runs on Android 4.4.2 KitKat with Sense 6, HTC’s latest version of its mobile software. Sense 6 is HTC’s layer that goes on top of Android to give its phones their own distinct flavour. 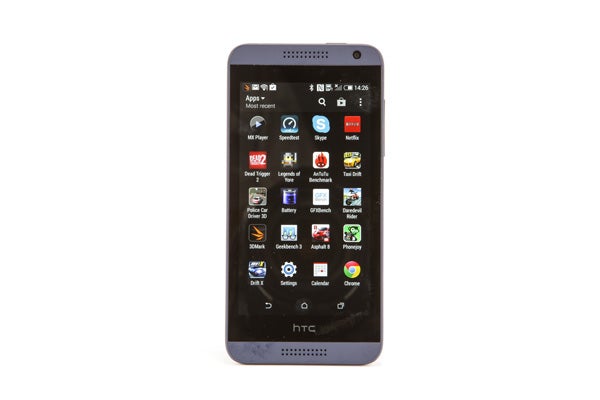 It is a reasonably light touch and anyone familiar with stock Android should have no problems picking up and using the HTC Desire 610. In the unlikely event you do have any problems there are plenty of helpful pop-up tips and guides that get you on your way.

Some of the highlights of the HTC’s software are the Kid Mode and Parental Controls apps. These allow you to set up profiles for your children so that that can safely play on your phone without accessing inappropriate content or “accidentally” deleting all your contacts. It also has oodles of free content you can download, from kiddie friendly games to hundreds of age appropriate cartoons. it’s perfect for keeping the wee nippers quiet for hours. 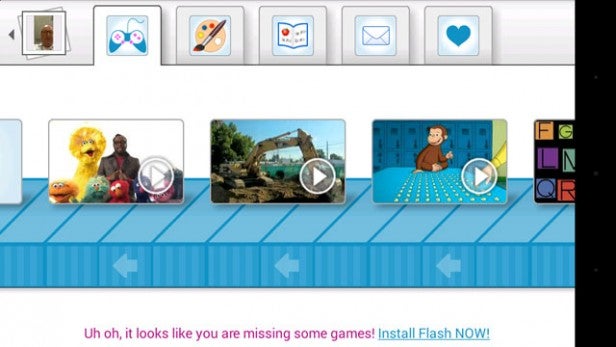 BlinkFeed has also had an update and now lets you easily access the content from your favourite news websites in a constant stream.

In all other respects the interface of the 610 is much the same as any other Android phone.