The HTC Desire 500 runs Android 4.1.2. This is a tad disappointing considering the LG L7 II, a similarly-priced Android phone, runs 4.2.2. This means you miss out on a few features, such as wireless display support via Miracast (though DLNA is supported) and a few other tweaks. It’s nothing too serious, however, particularly as the HTC Desire 500 has Google Now and also runs HTC’s Sense UI 5.0. Sense UI is one of the better manufacturer skins going, the highlight of which is BlinkFeed.

BlinkFeed pulls in Facebook, Twitter and assorted news feeds (customisable feeds from reputable sources) to give you an up-to-the-minute feed of everything that’s happening everywhere. It’s accessed as a kind of full screen widget that’s just a swipe away from your main homescreen. It’s neat, slick and a genuinely useful addition to your phone. 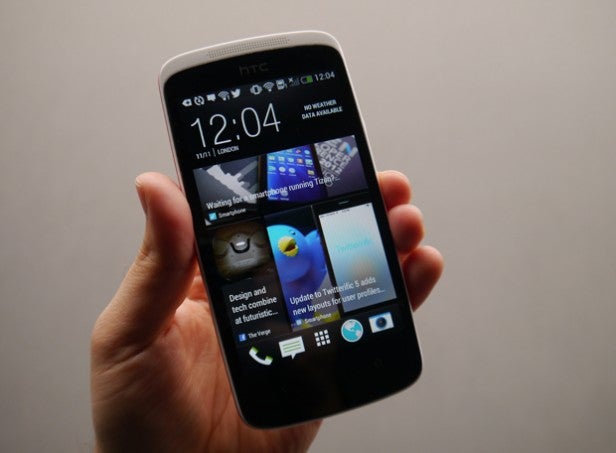 Dig deeper and you’ll find HTC does a decent job of tidying up Android’s rather utilitarian settings menus into something friendlier and more accessible. The only part we’re not so keen on is the setup, which has rather too many steps to jump through for our liking.

You have to setup an HTC account to use HTC’s (admittedly rather useful) backup service, sign-in to Facebook to get Blinkfeed up and running, and you’re offered the chance to log-in or sign-up to Dropbox as part of its deal with HTC that gives you 25GB of storage. We love the extra cloud storage, but we could live without quite so many prompts just to get started.

If we’re being picky, by default you have to dig through menus to access the brightness controls, which is annoying. This is nothing a well-placed widget won’t fix, though it’s something novice users might not think of. In mitigation HTC leaves a toggle for the ‘power saver’ feature permanently present in the notifications tray – more on which later in the review.

The other irksome feature common with all HTC phones is the language toggle on the keyboard itself. It sits next to the spacebar, which means it’s all too easy to accidentally hit it and end up changing the language on your keyboard. It’s annoying and totally unnecessary. 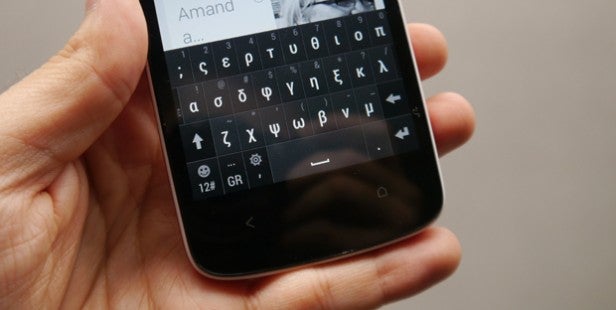 Inside the HTC Desire 500 beats a quad-core Snapdragon 200 processor running at 1.2GHz and 1GB RAM. This is enough to keep HTC Desire 500 going at a decent lick, though it does occasionally stutter a little when downloading apps in the background. It’s a barely perceptible difference, however, which only results in the occasional bit of jerky scrolling. Overall it’s slick and responsive in general use.

The Desire 500 CPU scored 834 in the Geekbench 3 benchmark, which makes it around a third faster than the dirt cheap ZTE Blade V and over twice as fast as the aged iPhone 4S. This is a decent result at this price, though it’s alarming (for HTC) to note that the Nexus 5 is over three times faster in the same benchmark. The fact the Nexus is ‘only’ £100 more SIM-free (and about the same over the length of a contract) is just another reminder of what good value the Nexus 5 is. 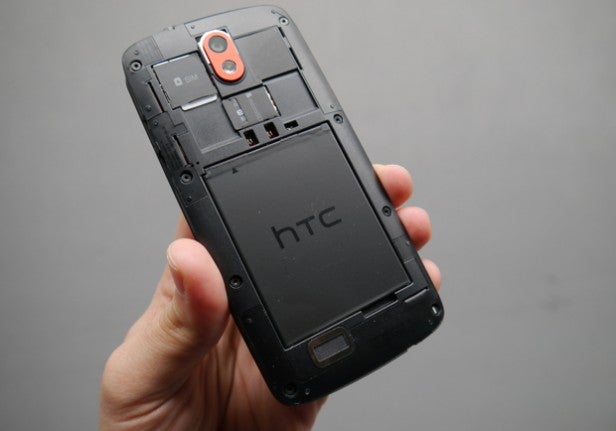 More pertinent to the HTC is that it’s nearly twice as fast as LG L7 II in the same test, the latter being around £20-£30 cheaper SIM-free. That’s a decent gain for a small amount extra, and it definitely shows in the HTC Desire 500’s responsiveness.

In the 3D Mark Unlimited gaming test the Desire 500 scored 3,100 compared to the 2,290 of the LG, a circa 15 per cent improvement. This doesn’t make the HTC Desire 500 a gaming behemoth by any stretch, but we managed to play the likes Dead Trigger 2 with no problems at all. Real Racing 3 runs smoothly, too, though with noticeably downgraded, jagged visuals compared to higher-end phones.