Starting our day at around 7am, we spent an hour on the train browsing the web on 3G and catching up on the morning news. By the time we reached the office the Desire 500 was down to 83 per cent. The phone then spent most of the day idle but for the occasional bit of web browsing (40 minutes or so) and a very short five-minute gaming session.

By lunchtime it had hit 63 per cent and by 4pm this was down to 39 per cent. We did, however, leave Wi-Fi left turned on throughout this time, something that’s probably worth 10 per cent or so of life over that time. 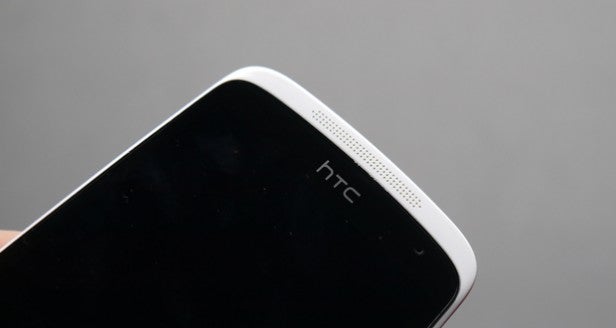 A longer 20-minute gaming session then saw this drop quite considerably to around 19 per cent by 6pm, which didn’t leave us much life left for the evening. We managed to stretch the HTC Desire 500’s battery to 10:30pm using the power saver mode, which downclocks the CPU, reduces brightness, turns off vibration feedback and switches off the data connection when the screen is off, but it’s clear you’ll have to make a more concerted effort to save power throughout the day.

We’d recommend turning off Wi-Fi, obviously, but switching off the default vibration feedback on keyboard presses won’t hurt, either. We also suspect BlinkFeed doesn’t help matters by auto updating when it’s connected to Wi-Fi. General performance is fine with the power saver mode enabled, so keeping it on for most of the time will only be problem if you rely on background updates for things like Google Now

Overall, given a little more effort we’re sure you can get a whole day of medium-light use from the HTC Desire 500, but it’s clearly not a phone that will satisfy heavy users.

Sound quality is a tale of two halves. Call quality is very decent. The earpiece is clear and loud, leaving us with no problems hearing the other end of calls. There’s no active noise cancelling to drown out background noise, but provided you’re not making a call next to a jackhammer you shouldn’t have a problem making yourself heard.

As befits an HTC phone, the Desire 500 has ‘Beats Audio’ but this only applies when using headphones, not to the built-in speaker. We can hear why because the built-in speaker is poor, so poor that we shied away from using the speaker phone feature. With headphones, however, the Beats Audio effect isn’t as offensive as we first feared. It adds a little low-end power, but not so much as to cause distortion. 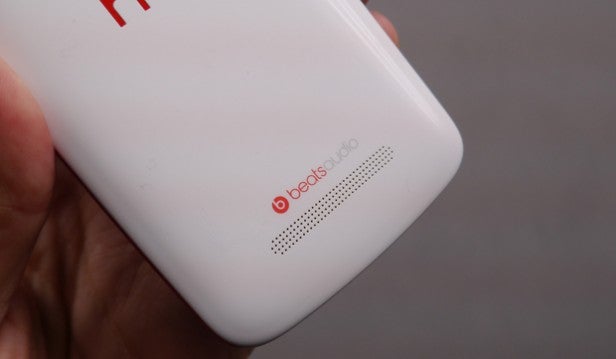 Like most cheaper Android phones, the HTC Desire 500 comes with just 4GB of storage built-in and a microSD card slot for expansion. This is fine for light users, though HTC’s pre-loaded software takes up more space than most. 2.9GB is used up by the OS and other permanent bits and bobs, namely the Sense UI and its constituent parts.

Throw in pre-installed Google apps and a few other trinkets and you’re down to just 1GB free, which will get used up pretty quickly once you start taking a few photos and installing apps. An SD card is a must for all but the lightest users.

Another key difference between the HTC and slightly more expensive phones is the mobile connectivity. The HTC Desire 500 is limited to HSDPA (3G to you and me) at up to 7.2Mbps. The similarly priced Nokia Lumia 720, however, supports speeds of up to 21Mbps over 3G, while the more expensive Nexus 5 supports that and 4G LTE as well. It’s something worth considering for a phone you’ll live with for two years or so. 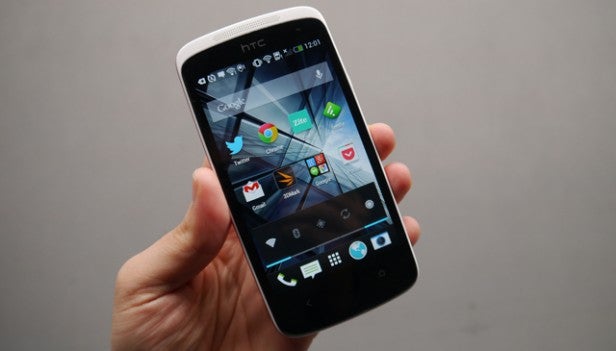 Fundamentally, the HTC Desire 500 is a very decent phone. We love the design, it’s snappy and responsive to use and the screen is agreeably bright. The camera is, by and large, good as well despite a few iffy moments. At this price it’s one of the best (if not the best) Android phones around.

That isn’t quite enough to earn blanket recommendation, however. Its so-so battery life is bound to irk some people, but the principal issue is that the Nexus 5 has rather shifted the game at the cheap end of the market. It may be £100 more expensive SIM-free, a non-trivial sum, but a brief bit of shopping around shows the Nexus 5 is only £100 more over two years on ‘low usage’ tariffs with 250MB of internet. Moreover, some more expensive ones with unlimited internet are the same price, or near enough as makes no difference.

Tariffs change, of course, but on contract the Nexus 5 remains the better choice by far right now.

The HTC Desire 500 is a very good phone that’s perfect for light, relatively undemanding users who don’t want to put up with the very cheapest phones around. But enthusiasts looking for a good deal are better off looking at the Nexus 5, which offers a lot more for not that much more money.

Next, see our pick of the best cheap mobile phones right now