One of the key selling points of the HTC Desire 310 is that you get most of the software benefits of something like the HTC One M8 in a much lower-cost package. They share the same core HTC Sense UI, although where the Desire 310 has version 5.1, the One M8 uses the more advanced version 6.

The version of Android used here is also rather old. You get Android 4.2.2 rather than the latest Android 4.4. While each new version offers numerous improvements, using quite an invasive custom UI can often fill-in the gaps. And HTC Sense changes Android quite a bit.

There’s nothing that makes the interface feel truly alien, but if you’re switching from another Android phone, you’ll definitely notice a few changes. The apps menu looks rather different, for one, and the pages of apps scroll vertically rather than horizontally. Getting used to this is a bit like driving on the ‘wrong’ side of the road when you’re on holiday: a bit weird at first, but you soon acclimatise. 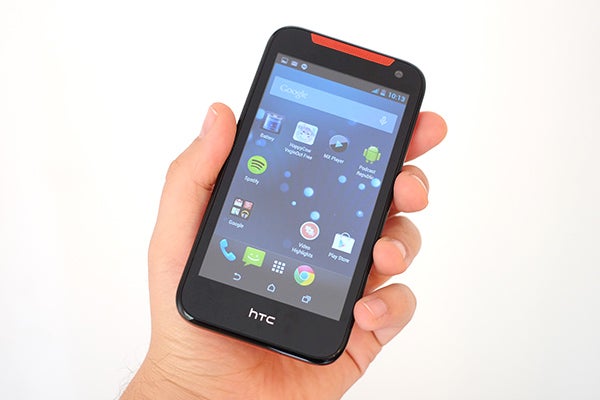 The lead part of HTC Sense is not a stylistic change like this, but BlinkFeed. This is a separate home screen that gives you updates from your favourite sources, whether from websites or social networks. Or both. 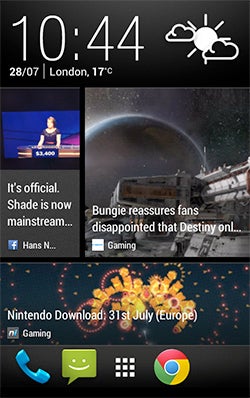 When Samsung tried to do this with its Magazine UI, we were not fans. However, we like HTC’s (longer-running in fact) take on the idea. It has a great visual style, using images whenever available, and as it scrolls quickly in pages with a thumb-flick, it almost feels like flicking through a digital magazine.

Don’t like the idea? HTC has also made it easy to turn BlinkFeed off, giving the Desire 310 more of the feel of a standard Android phone.

General performance is very good in the Desire 310 too. There’s no annoying navigation lag, as there is in so many other budget phones. And that is despite the phone using a MediaTek processor rather than the more popular Qualcomm Snapdragon type.

It’s nice and snappy throughout. However, we did notice a few little annoying usability problems. First, the software soft keys eat into the screen a fair bit. They are given a lot more space than, for example, the Sony Xperia E1’s or Nokia Lumia 630’s. We found that we often pressed them accidentally when typing on the keyboard, leading to the the phone skipping back to the home screen.

The keyboard itself has a few problems too, as it does in any HTC phone – they all use HTC’s own one. It’s far too easy to press the language select button, meaning you end up wondering why the Desire 310 keeps on suggesting French words for your emails roughly once a week. Our tip – consider switching to the standard Google keyboard, available from Google Play.

Most of the interface problems are tweak-able or things you’ll get used to, and otherwise the phone is pleasant to use thanks to the solid performance.

So why is performance good when some other budget phones struggle? The main reason beyond more careful software tweaking is that the HTC Desire 310 has 1GB of RAM instead of 512MB. More RAM comes in very handy when moving between apps. Make sure you do get the 1GB version as there’s a 512MB Desire 310 for territories other than Europe, and it’s sure to be a bit laggy. This should only be a problem if you’re importing or buying from eBay. 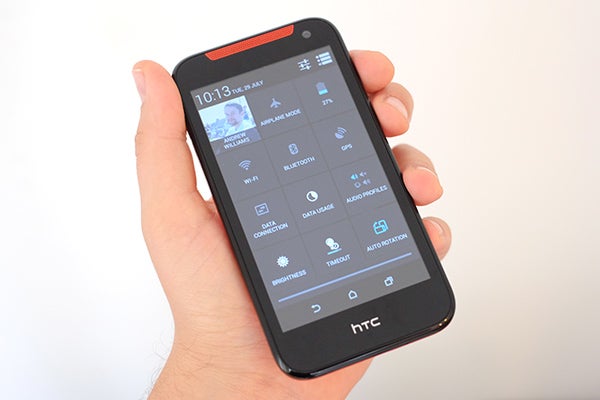 The HTC Desire 310’s CPU is pretty capable, too. It uses the Mediatek MT6582M processor, a quad-core 1.3GHz number that is roughly comparable with the Snapdragon 400 used by the Motorola Moto G.

However, the Mali 400MP2 GPU is a little less competent than the Adreno 305 used by the Snapdragon 400, and we did notice that gaming performance was slightly less consistent than it was in the EE Kestrel or Moto G. Can it handle games like Real Racing 3 though? Absolutely, it runs fine, with just slight frame rate inconsistency.

In the Geekbench 3 benchmark, the HTC Desire 310 came out with 1,178 points, very similar to the scores of Snapdragon 400 phones. Despite using a Mediatek processor, its performance ranks among the top phones at the price.