The HTC Desire 310 is HTC’s lowest-cost smartphone. It’ll cost you around £110 SIM-free, putting it in direct competition with our budget favourite, the Motorola Moto G.

You might see it as a simple upgrade to last year’s HTC Desire 300, but it also adds-in most of the software features seen in top-end HTC phones like the HTC One M8. For people who like that HTC software flavour, the Desire 310 is worth checking out, although it doesn’t really rival the very best budget phones out there. 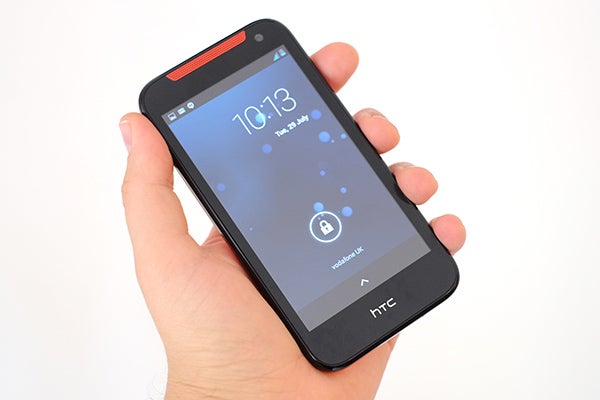 The HTC Desire 310 is one of the tougher-feeling affordable phones. While the footprint is fairly small thanks to its 4.5-inch screen, the 140g weight and 11.3mm thickness give it a similar chunky and hefty feel to the Motorola Moto G.

Poke the plastic battery cover in the wrong place and there’s still bit of flex, but construction is a cut above a cheaper phones like, for example, the Sony Xperia E1. A lot of the phone’s hardy feel comes down to what covers the front of the screen rather than the back, though. 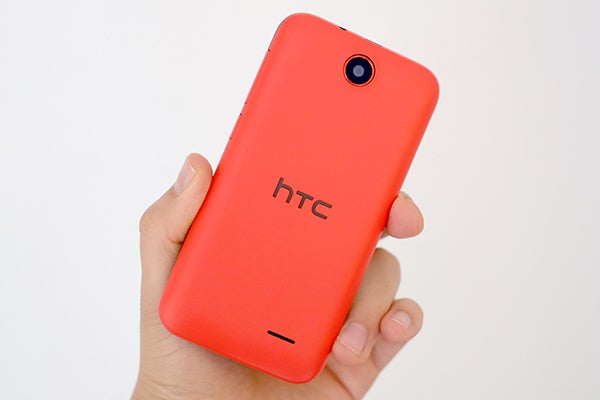 The front of the HTC Desire 310 is Gorilla Glass 3, the kind of toughened glass used to protect the displays of most £500 phones. It’s super-tough, super scratch-resistant and doesn’t bend under the pressure of your finger, giving the phone a reassuring immovable feel.

If you’re wondering why your friend’s expensive phone feels nicer than your one, Gorilla Glass 3 may be part of the reason why. While other low-cost phones use treated/toughened glass, few at this price use real Gorilla Glass. We should say, though, that the Motorola Moto E and Moto G do.

Rather like Nokia’s recent budget Lumia 630, the Desire 310 doesn’t just come in the normal black and white shades. You don’t get a wide choice, but there’s a striking red model available as well as the black/white ones.

It’s not just a case of the colour being applied to the back cover, either. The front speaker grille and the ring around the camera lens on the back are also matched to the red rear in our review model, providing a couple of little visual touches you don’t often get in very cheap phones. 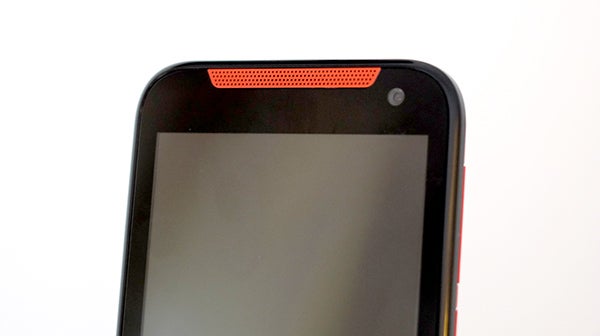 Touches like the Gorilla Glass and extra visual flair make the HTC Desire 310 feel like it is almost (if not quite) a mid-range phone. Its construction is cut above some, say, £80 mobiles.

Pop the back off with a fingernail and you’ll see the full-size SIM slot, the space where the second would sit in the dual-SIM model (not widely available in the UK at present) and microSD card slot. One of the key advantages of the HTC Desire 310 over the original version or the Motorola Moto G is this slot, although it’s needed as with just 4GB of memory the Desire 310 is very storage-poor. 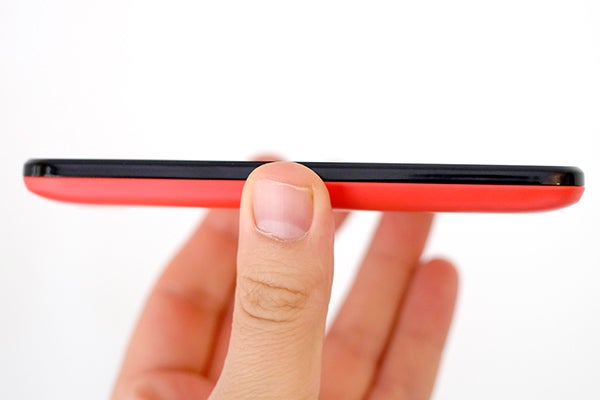 Where the HTC Desire 310 lags behind a bit is its screen.

It has a good-size 4.5-inch LCD display. This kind of scale offers a great balance between making things like games and browsing fun while keeping the phone small enough to make it easy to handle. Size isn’t the issue. As, has already been mentioned, the Gorilla Glass layer gives the Desire 310 screen a great feel too.

These cut backs on resolution and panel type both have knock-on effects on image quality. First, let’s deal with resolution. 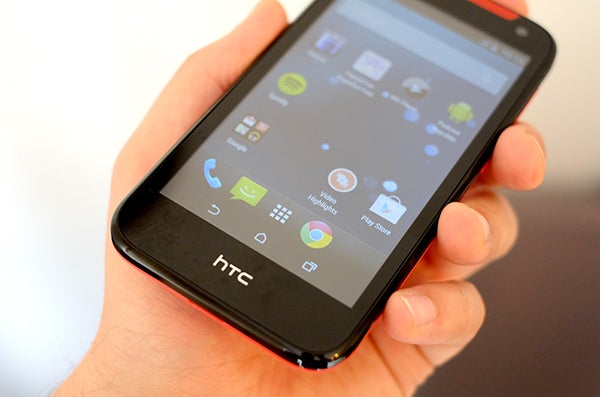 We’ll hand it to HTC – the Desire 310 uses a higher-quality TFT LCD than most cheaper mobiles, helping it to avoid looking too soft or making the space between pixels too apparent. However, nothing is sharp or pristine. It’s most obvious when you’re browsing, as text is a little pixellated.

Until fairly recently, we wouldn’t have complained too much about this. It used to be the norm in phones below £200 or so, but over the last year we’ve started to see budget phones offer much better sharpness than is afforded by the 218ppi of the Desire 310. Want that bit of extra screen zing? Check out the EE Kestrel, the Motorola Moto E and G, and the Alcatel One Touch Idol S (sadly not that readily available in the UK any more).

Using a TN-based panel exacerbates the HTC Desire 310’s screen issues. Viewing angles aren’t anywhere near as good as they are in an IPS display, with contrast shift causing colour inversion when the phone is tilted forward.

We will admit that this isn’t something you’ll naturally do often, but it does mean you can’t really share videos all that well when you hold the phone in landscape orientation – the screen will look pretty rubbish to anyone sat to the to the left or right. It’s also not great if you’re playing a game where you have to tilt the screen, as you see the limited angles altering the look of the screen with every move. 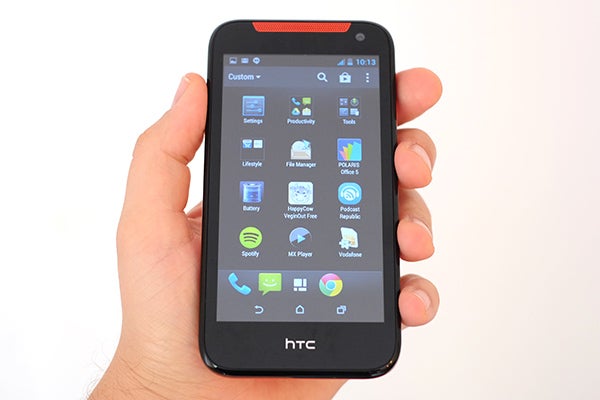 Daylight readability isn’t great, either. Reasonable top brightness means it is usable on a sunny day, but we took the HTC Desire 310 out and compared it to the budget champion Motorola Moto G and found the Motorola much better at coping with bright daylight.

Rather annoyingly, there’s no automatic brightness setting on the HTC Desire 310 either, which means you need to manually alter the backlight when you go outdoors. When HTC has added extra flashy bits like coloured speakers grilles, leaving this completely basic bit of hardware out seems very odd.