Upholding its tradition of strong support for Windows branded mobile phone software, HTC announced five devices at the launch of Windows Phone 7, three of which are already available. The HTC 7 Trophy is marginally the cheapest of the three due to slightly more modest hardware but thanks to some neat design it’s still well worth checking out.


You can pick the phone up SIM free for around £430 but if you want a contract it’s exclusively available through Vodafone where it’s free on 24 month contracts above £25pm. A £20pm contract will require £199 up front.


What appeals so much about the 7 Trophy is simply that it’s so well designed. The button-less glass front and black plastic body, delineated by a silver bevelled edge, gives it a wonderfully simple yet elegant style. In contrast, prize the battery cover off and there’s a gloriously vibrant yellow interior that, just as with the HTC HD Mini, is utterly pointless but at least for the first few moments you play with it brings a smile to your face. 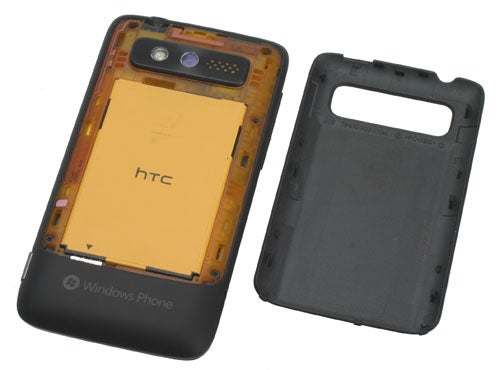 Despite using less premium materials – i.e. plastic rather than metal – for construction of most of its body, this phone also feels reassuringly solid, something that’s given away by its weight of 140g. While the soft-touch plastic used on the back does tend to rub away to a shine over (a long) time, it makes the phone comfortable and secure to hold while it’s still in tip top condition. 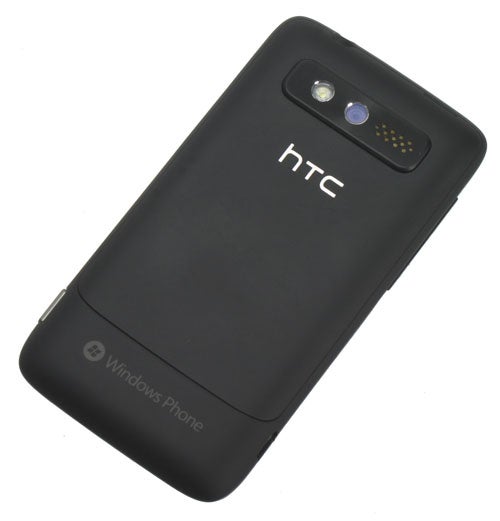 The three touch sensitive buttons incorporated into the glass of the front look superb and are nice and responsive. In fact, just as with the Samsung Omnia 7, they’re almost too sensitive, making it relatively easy to accidentally press them.


Not suffering from the same problem are the volume and power buttons, which are a tad mushy, though not to any particularly worrying degree. The position of the power button on the top edge combined with the lack of any physical buttons also means you always have to reach up to the top of the phone to unlock the screen – somewhat inconvenient when you’ve only got one hand free. It’s a common mistake made nowadays but it’s no less mildly annoying.

Round the sides are the usual selection ports and buttons with a headphone jack joining the power button on the top edge, the volume rocker and a microUSB socket on the left edge and a camera button on the right. We hate to keep banging on about it but it really can’t be said enough how useful a button for the camera is – well done Microsoft for making this standard. Meanwhile on the back is the five megapixel camera with its LED flash.

Slightly less well thought out is the fact the power button, if held down, can still turn the phone off even when the screen is locked (there’s no confirmation screen). It’s unlikely, but not the most practical design decision from Microsoft (again, this is a standard thing with Windows phone 7).

The 3.7in screen has a resolution of 480 x 800 pixels, which is fairly typical for a phone of its caibre, and is an LCD panel. In terms of general clarity, sharpness and readability, it’s excellent. However, it is a tad muted when it comes to colour saturation and contrast (much like the Desire HD in this regard), while viewing angles, though adequate, aren’t the best with slight drop off in saturation and some colour shift. It’s very good for all everyday work duties but if you want to game or watch video, the punchiness of an AMOLED display like on the Samsung Omnia 7 may be your preference. 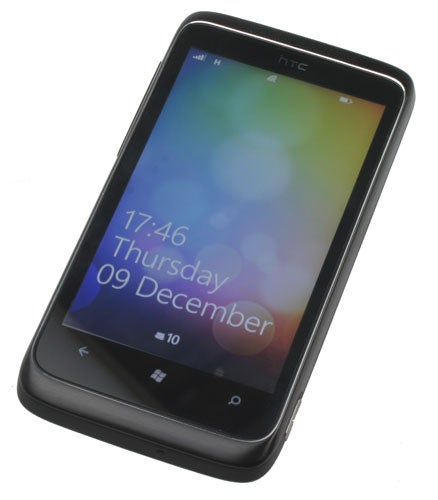 What can’t be faulted about the screen is its responsiveness and size (the whole phone measures 62 x 119 x 12mm). It’s a comfortable size to be able to reach most of the screen one handed and the multi-touch panel picks up speedy finger taps perfectly. 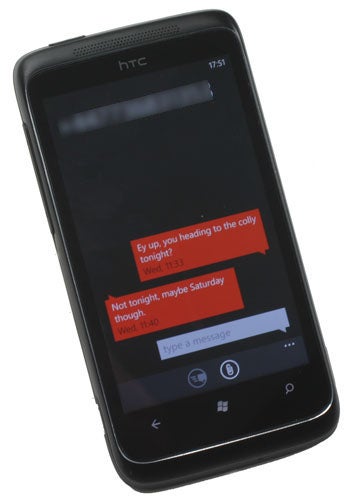 One of the areas this is most acutely felt is when typing where the screen combines with an excellent onscreen keyboard to make typing a breeze. The 2.3 update to Android (not yet widely available of course) probably still has the best keyboard in terms of extra features (not least for the fact that you can cut, copy and paste, which you can’t yet do in Windows Phone 7) but this one is still very nice to use.


As for the rest of the software side of things, what Microsoft has stipulated is that phone manufacturers can’t actually change the interface, as they can on Android and Symbian, so what experience you get on one Windows Phone 7 will exactly match what you get on another. 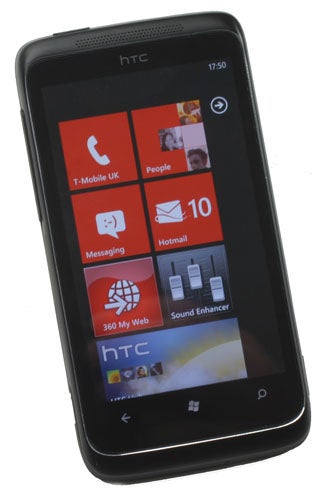 We’ve written at length about the merits of Windows Phone 7, so if you want the full low down we suggest you give that a read. But in summary it is a very slick, speedy and smooth operating system that feels as free flowing and finger-friendly as iOS or any other top notch alternative.


The design is very different to most with the homepage consisting of large Live Tiles arranged in one long column, rather than multiple pages of shortcuts and widgets. Swipe left and you’re presented with the full list of you’re installed programs. It’s an interesting design with some merits in terms of simplicity but we generally find it a bit limiting and inefficient in terms of finding your favourite programs quickly. 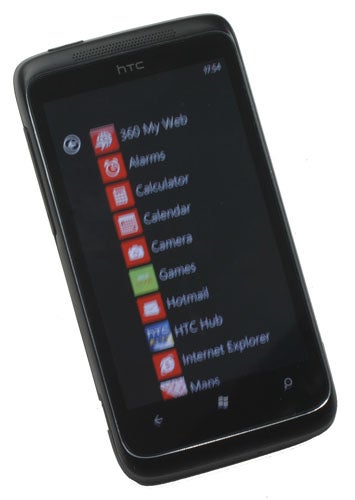 One of its key features is integration of social networking. Sign in with your Windows Live, Facebook, Exchange or other email accounts and you’ll find the People Hub (contacts to you and me) populated with updates, photos and information from all these services. Moving through the OS you’ll also find other apps using this information like the Pictures Hub, which pulls down your Facebook pictures to the device as well as showing you a stream of other people’s pictures direct from these services.

Along with some slick Xbox gaming integration, Zune music streaming, Office document viewing and editing and rapidly growing app store this makes for a fairly capable modern OS. However, there are a couple of major caveats. 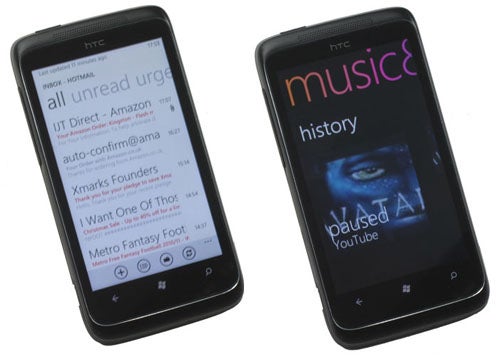 We’ve already mentioned the lack of copy and paste, which will be added in an update in a month or two’s time, but there’s also no multitasking. Also, we’re not too keen on the overall interface in the sense that while it’s slick, it does feel a little bit like it’s been designed with an eye to style over substance.


Also the way the Back button works is very strange. Instead of working as a back function within whatever app you have open – navigating back a page in the web browser, or back from looking at an album to viewing the list of artists, for instance – it always takes you back to whatever the previous screen you were looking at was, even if it was the homescreen or another app. The result is that if you’re browsing the web, say, then nip out to check an email, when you return to the web browser and press the Back button it will take you back to the email rather than back a page in the browser.


Overall, though, if you’re looking to upgrade from a non-smartphone then you’ll find Windows Phone 7 a great OS. It’s just that iOS, Android, or WebOS users will probably find it a bit limiting and too unfamiliar. 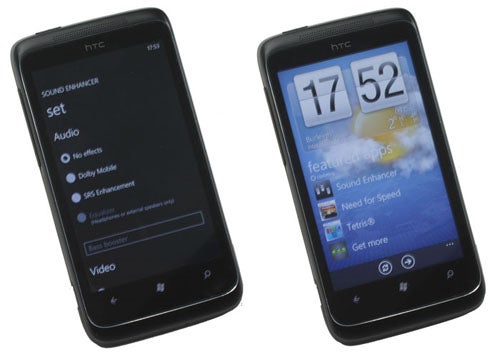 To try and differentiate its handsets from other Windows Phone 7 alternatives, HTC has made available a number of little apps including the HTC Hub, which gives you quick access to a number of features like weather and and HTC app downloader. Frankly, it’s far too little to be of any significance in your buying decision. The same could be said of the Dolby Mobile sound enhancements exclusively on offer on HTC handsets that let you add surround effects when watching a movie and listening with headphones.


Getting back to the hardware, inside the HTC 7 Trophy you’ll find a 1GHz processor, 576MB RAM and a fairly miserly 8GB of storage, and no microSD slot for expanding that storage. 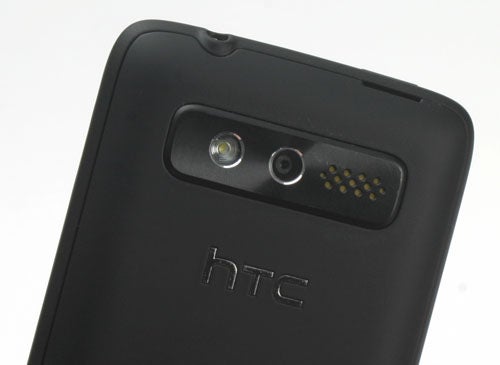 What will quickly fill that storage is the camera with its 720p HD video mode, which given how nice to use the camera is, you’ll probably be using quite frequently. The quality for both stills and video isn’t stellar but it’s certainly on a par with most of its peers and is sufficient for general social use. 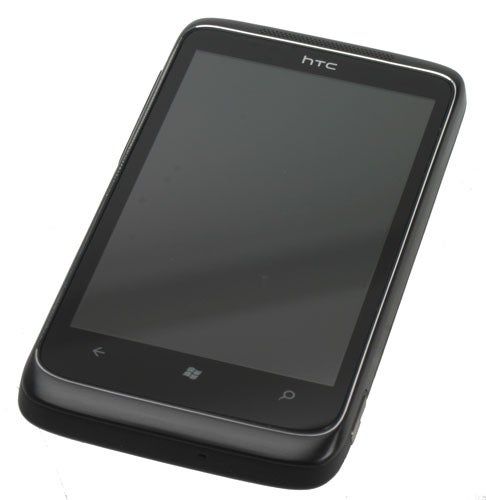 With its 1500mAh battery, you get a fairly typical lifespan from this phone. A couple of days and you’ll generally be needing to recharge, though as ever you can extend this by a day or so with much lighter use while heavy use will reduce this to as little as a day.


Thanks to a neat design and relatively low cost, this is definitely one of the choice Windows Phone 7 handsets out there. However, we’re still not entirely convinced that Windows Phone 7 is in fact the best choice of mobile OS, so it’s not a phone we’d out and out recommend. We recommend reading our in-depth look at Windows Phone 7 so you can see for yourself whether it’s for you.