The most interesting component inside the ZBook is AMD’s FirePro M4150 graphics core. It’s the first time we’ve seen a workstation GPU inside an Ultrabook, and it’s doubly impressive, as machines at this end of the market don’t usually include any discrete graphics.

The M4150 is a mid-range core based on AMD’s Radeon HD 8750M mobile chipset with 1GB of dedicated memory. It’s also ISV certified, which means it’s guaranteed to work with a huge variety of graphical productivity tools.

The M4150 made an inauspicious start in benchmarks – its score of 42,182 in the 3DMark Ice Storm test wasn’t as good as the 48,874 scored by the Lenovo and its Intel HD Graphics 5500 core. Tougher tests revealed that the AMD core does have the grunt to cope with demanding work: its Fire Strike score of 1,309 is almost twice as fast as the Lenovo, and it was more than ten frames quicker in Unigine Heaven. Plus, of course, it’s a proper certified card for use with professional computational loads.

Both laptops have Intel’s Core i7-5600U processor, which runs at 2.6GHz across two cores, but the ZBook trumps its rival on memory – it’s got 16GB of RAM, which is twice as much as the Lenovo. There was little to choose between the two in PC Mark 7, where the HP’s score of 5,266 was just over 100 points behind, and the extra memory allowed the ZBook to take the lead in Geekbench. In this test, the HP scored 6,822 – comfortably ahead of the Carbon’s 5,194.

It’s enough power to cope with most applications: everything in Microsoft’s Office suite will run without complaint, and the GPU means that photo editing and video processing is also possible. Only the most demanding work applications will need more oomph than the HP can provide.

There wasn’t much to separate the ZBook from the Carbon in our storage tests: the HP’s 512GB SanDisk SSD scored 398MB/s in the sequential read test, which was slower than the Lenovo, but its write pace of 364MB/s was better. Benchmarks aside, it’s a good bit of kit, with application loading and boot times that proved rapid.

The ZBook’s thermal performance wasn’t as impressive as the Carbon. The processor’s top temperature of 92 degrees isn’t far short of the chip’s thermal limit and is far beyond the Lenovo’s highest point. The GPU was far less stressed, though, hitting a maximum of 75 degrees.

The HP’s bottom becomes a little toasty under duress though it’s nothing too concerning. Hot air is expelled through a vent on the left-hand edge. The fan noise when under load is a little disturbing and can easily be heard in a quiet office – something we didn’t notice on the Lenovo. It’s not a clean bill of health, even though the HP is virtually silent during easier tasks.

Longevity is another area where the HP is good, but the Lenovo is better. In our standard test the ZBook lasted for six hours and 25 minutes, but the Carbon was more than three hours better in that same run.

We turned on Power Save mode and turned down the screen brightness but, even with a more modest benchmark, the HP barely made it over nine hours, which still doesn’t beat the Lenovo’s standard result.

We praised the Carbon’s keyboard for going beyond what’s offered by most Ultrabooks, but the HP can’t match its rival – instead, it’s more consistent with other ultra-slim laptops.

The HP’s keys don’t have as much travel as the buttons on the ThinkPad, and they’re softer. Overall, it makes for a typing action that’s perfectly adequate for hammering out long reports, but one that’s not quite as satisfying or comfortable as the Lenovo version.

The HP isn’t quite as good when it comes to layout, either. Its Return key is single-height, and its Function keys are smaller.

The HP has built-in buttons at the bottom of its trackpad, which would ordinarily win the ZBook points, but they’re a little wobbly for our liking. The same problem effects the buttons used to accompany the trackpoint, too, and the HP has two – one fewer than the ThinkPad.

The buttons aren’t quite as good, which is a shame, as the HP’s trackpad surface is just as slick and smooth as Lenovo’s offering. 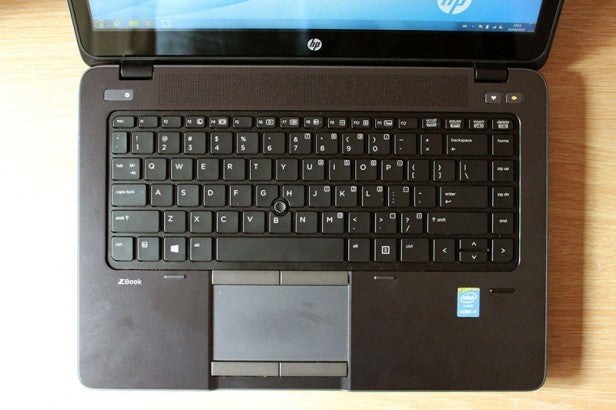 Our ZBook review sample makes changes to HP’s basic specification – the processor jumps from a Core i5-5500U to the Core i7-5600U, the SSD is doubled in size and twice as much RAM is installed. All of those changes increase the price, from £1,829 to a mighty £2,563.

That’s far too expensive. The small processor leap costs more than £300 but only has a minimal impact on performance, and only those running particularly tough business applications will need the extra memory and storage space.

The basic version of our review sample is far more palatable, and even cheaper configurations are available. The most affordable model costs £1,065 and still comes with a Core i7 processor, but it’s got 8GB of memory, a 256GB SSD, no discrete graphics and a 1,600 x 900 screen. It’s a better deal than the cheapest Lenovo, which costs £1,200 but makes do with a Core i5 processor, 4GB of memory and a 128GB SSD.

HP’s machine comes with a three-year warranty by default, which means it matches the Lenovo’s deal. That’s a big help for long-term security and a significant factor in the high price of the machine. 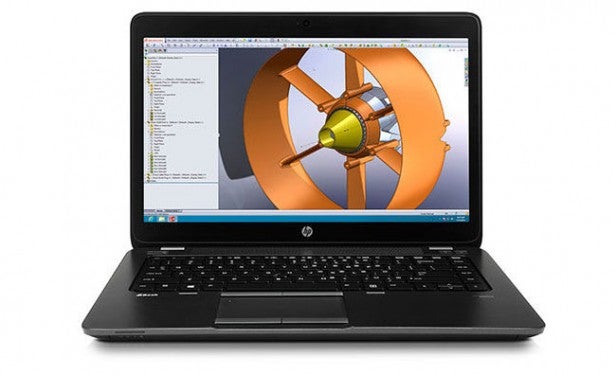 HP’s latest workstation laptop is attractive in several important areas. It’s got a discrete professional GPU that can handle graphical applications with more aplomb than any other Ultrabook, and the rest of its specification is powerful, too.

It’s also one of the most versatile Ultrabooks we’ve seen, with a generous port selection and easy interior access.

It faces strong competition from Lenovo’s latest ThinkPad, though, and the HP falls behind the X1 Carbon in several different departments. The ZBook is thicker and heavier, it’s screen isn’t quite as good, and the HP laptop doesn’t have the same high-quality keyboard. The HP can’t match its rival for battery life, either.

And then there’s the price. Our sample is far too expensive when compared to the souped-up Lenovo we reviewed and, even when cut back, it still costs a little more.

In most departments, the HP falls behind the Lenovo when it comes to business Ultrabooks. Only fork out the extra cash for the ZBook if you really need that discrete GPU or interior access.

Still mulling over a purchase? Check out our latest laptop reviews, or our round-up of 2015’s best tablets.

The Zbook is a reasonable machine in most departments and it’s got the advantage of great chassis versatility and a discrete workstation GPU, but Lenovo’s rival is lighter, slimmer, has better ergonomics, a sharper screen and improved battery life. HP’s workstation laptop isn’t bad, but the Carbon X1 is a better buy unless you need that FirePro GPU.