The ZBook range aims to provide potent portables for working on the road, and the latest addition to HP’s stable of office notebooks is one of its slickest and slimmest yet.

This isn’t the first ZBook we’ve seen recently, though – the 15in version provided huge performance, but screen quality was inconsistent and it was ruinously expensive. We’re hopeful that the 14in version can provide a better balance than its larger stablemate.

The ZBook 14 G2 has one key distinction that marks it out from its bigger brother – its Ultrabook designation. That means it fits into Intel’s exacting ultraportable laptop standard: it’s 21mm thin and weighs 1.7kg, it’s got a touchscreen, and it ticks the relevant boxes on the inside. That means this is a notebook you can carry without it taking up much room in a bag, or weighing down your shoulder. 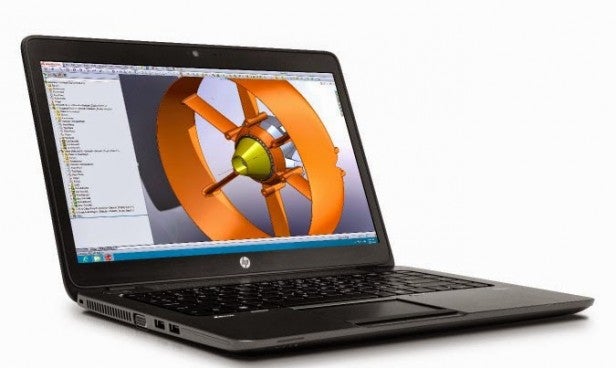 It’s thinner and lighter than the 2.8kg, 40mm-thick 15in version, but its design still takes cues from the larger model. It’s all business: a smart brushed metal pattern across the lid is bordered with more mundane plastic, and the interior is dark and understated.

The 14in version of this machine also features many of the smart office features we were pleased to see on the bigger model. There’s a trackpoint with its own dedicated buttons, the keyboard is backlit, and the right-hand side serves up a fingerprint reader. It’s smaller than the 15in model, but there’s not much missing.

Connectivity is comprehensive. The SD card slot and Gigabit Ethernet port are hidden behind flaps, there are four USB 3 sockets, and even a Smart Card reader. Display outputs include D-SUB and a full-size DisplayPort connector. On the inside there’s the standard business offering of dual-band 802.11ac wireless and Bluetooth 4.0, but no provision for mobile broadband on our sample – that costs extra.

Internal access is available, too – a rarity for Ultrabooks. The base panel slides away after just one screw is removed, and many of the components can be swapped out: the two memory slots, battery, hard disk and WiFi card are all a screw or two away from freedom. There’s even upgrade room, with a 60mm M.2 slot and a second mSATA socket vacant. 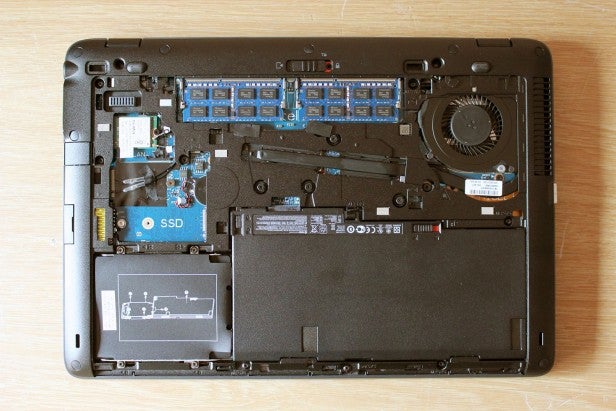 So far, so good, but there’s a spanner in the works – the 2015 version of the Lenovo ThinkPad X1 Carbon. It’s another business-focused Ultrabook, but it trumps the HP for design and aesthetics: it weighs just 1.4kg and it’s under 19mm thin, it’s made from magnesium and aluminium, and build quality is just as good as the ZBook – both have been through MIL-STD-810G tests. It’s got mobile broadband, too.

There are few design and build areas where the X1 Carbon doesn’t match the HP, though doesn’t have as many ports and sockets, and the HP’s internals are more accessible.

In this department, then, the HP is excellent – but the Lenovo is similarly impressive. Any buying choice will come down to whether you favour the ZBook’s ports and internal access or the Lenovo’s slimmer, lighter body.

The HP’s 1080p screen doesn’t match the pixel count of the Lenovo’s 2,560 x 1,440 panel, but that’s not necessarily a negative. HP hasn’t had to use any of Windows’ scaling options to make this screen usable, so there’s no chance of dodgy rendering problems with third-party apps.

In other departments the screens trade blows: they’re both touchscreens, but we prefer the HP’s anti-glare finish over the Lenovo’s glossy effort.

We’ve no major qualms about the HP’s resolution or basic specification, but it’s just not as good as the Lenovo’s panel in most benchmarks. The ZBook’s contrast ratio of 700:1 is lower than the Lenovo’s 1,013:1 figure largely thanks to a poorer black level, and the two screens have virtually identical brightness. 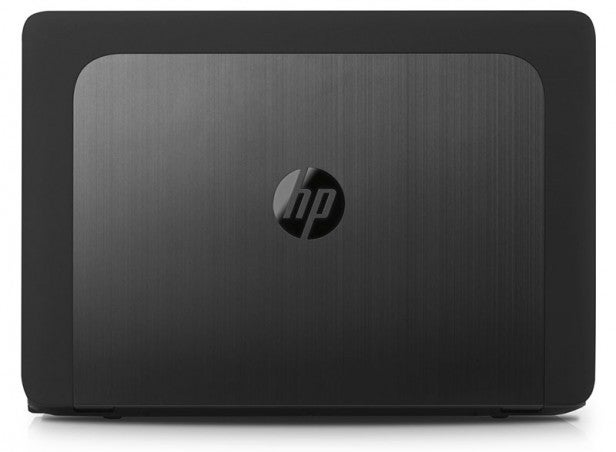 Colour accuracy is a mixed bag. The Delta E of 2.15 is excellent and the HP’s sRGB gamut coverage of 88.6% is good, with both of those results better than the Lenovo – but the ZBook’s colour temperature of 7,388K is off-piste, and far too cool. The Lenovo’s result of 6,584K is far better.

The HP’s better colour accuracy will attract those who work with photos, but the cool colour temperature robs images of a little vibrancy. The contrast and black levels aren’t bad on the HP, either, but the Lenovo is better – blacks are deeper, it’s a little easier to distinguish between shades, and bright colours are more vibrant. Overall it’s a good screen, with no major problems, but the ThinkPad’s panel is a little stronger.

The speakers can’t match the ThinkPad, either. There’s no bass to speak of, and music is utterly dominated by tinny high-end sounds that merge together with no sense of nuance or subtlety. We’d use headphones for music… or anything else, for that matter.

Used as our main laptop for the review period
Tested for at least a week
Used consistent benchmarks for fair comparisons with other laptops
Reviewed using respected industry benchmarks and real world use
Next
Performance, Battery Life, Keyboard & Verdict Review