The other day I sat down to give this monitor a thorough once over with some proper intensive technical testing – also known as Bioshock. Having played this fine game through on PC with a 22in monitor I was struck by how much more of an impact it made just by moving from a 22in to a 24in display. The two inch difference may not seem like much, but if you’re wavering then you really should think again – it does make a difference. 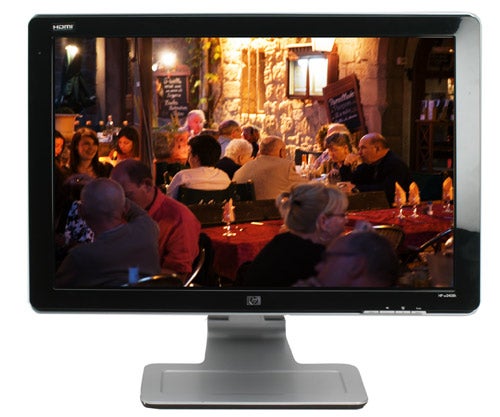 It’s not just about playing games, either. In general use, it’s even more pronounced – a 22in display will have a resolution of 1,680 x 1,050, which is not bad, but a 24in display will give you 1,920 x 1,200, which is that bit more usable. Many have realised that a 24in display is really the optimum in terms of native resolution, physical size, and cost, and with recent price erosion due to the use of cheaper TN based panels, as found in this HP, it is set to become increasingly popular. Certainly the price of this HP is going to get a lot of people’s attention and it has to be said you’re getting a lot for your money.


It’s a stylish affair with the glossy bezel and finish that is well and truly aimed at the consumer. It has to be said that the black and silver works very well, even managing to get away with a large green backlit power button sitting at the very top of the display. Nestling inside the left hand side of the bezel is a ambient light sensor that will automatically adjust display brightness based on light conditions, though if you make manual adjustments this turns itself off. 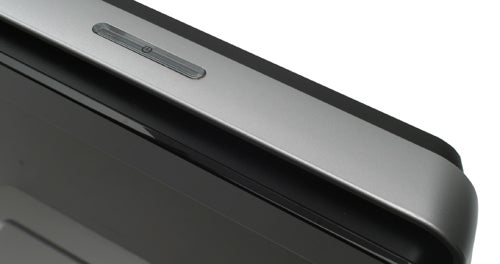 Along with the 24in 1,920 x 1,200 resolution panel, you get both an HDCP compliant HDMI port and a VGA connection too. Hooking up to a DVI equipped monitor can be easily done via an adaptor. Unlike the Dell 2407, there’s no component or composite input on this display, which is clearly going to be one area of cost cutting.


However, with the rise of HDMI, this isn’t as much of an issue – you will need to get a separate HDMI switcher but once you’ve done so, your PS3 and Xbox Elite are HDMI equipped, and the Xbox 360 can use a VGA connection too, so it’s only the Nintendo Wii that doesn’t have the luxury of being connected to this screen. The real answer would be to have a monitor with two HDMI ports or both HDMI and DVI.

You do get a USB hub, with four USB ports available – two on the bottom of the display and two of the left hand side. Personally, I really like having this feature on my PC – you can never have too many easily accessible USB ports to hand. If you’re wondering how the two ports at the bottom can be considered to be easily accessible then well done, as this leads me nicely on to another great feature on the w2408h, the fantastic stand which offers both tilt, rotate and height adjustment and is the same design as featured on HP’s 22in w2207. The spring loaded stand is oblong and does sit firmly on the desk, but also rests on a circular disc that enables it to pivot side to side as well. The stand also provides a very agreeable place to stow your keyboard, should you wish to temporarily free up some space on your desk. In fact, if you have an HP keyboard, you’ll find it’s designed to sit perfectly in the indentation – which is a good bit of design. 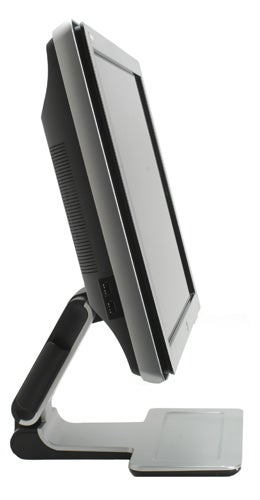 While it also has a small amount of forward tilt, about five degrees, the screen will tilt all the way back until it faces directly upwards, which is obviously not going to be much use. However, it conjunction with the height adjustment, with a range of 8.5cm, it enables you to get the optimum viewing angle. The monitor will also rotate to the side giving you a full portrait mode, which is a great feature at this price. 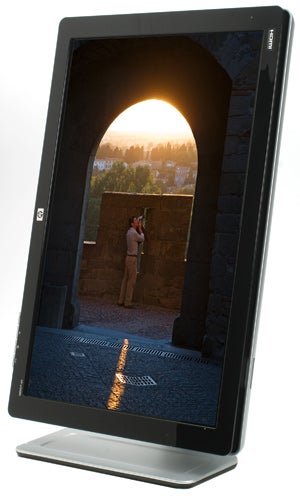 The design is clean and simple and there are four buttons on the bottom right. Pressing the menu button brings up an OSD which matches the stylish design of the externals, giving a consistency of design. Unusually, the menu doesn’t offer direct access to brightness and contrast. Instead, the second from left brings up the volume control for the built-in speakers. The speakers are placed at the rear of the monitor so your not getting the sound projected right at you, though it’s a moot point as the sound it pretty feeble – I’ve heard better from 2W speakers, and it actually distorted as I raised the volume, which was disappointing.

Pressing the other middle button on the OSD brings up Quick View settings, which are Movie, Photo, Gaming, Text, and Custom, the qualities of which I’ll go into later. If you want to access Brightness and Contrast then you have to press the Menu on the left. The option Custom Scaling presents you with the option for One to One pixel mapping, so you can get the correct aspect ratio from games and movies when you plug in something such as a PS3 or Xbox 360.


Generally the OSD is fine to use and navigate but you don’t actually have to use it. HP provides software on a CD, imaginatively called HP My Display, that gives you control of your screen. It provides a test pattern which you can use to optimise your picture and there’s one for colour too. You can also use it to mute the speakers, switch between inputs and there’s an Auto-Pivot option that will turn windows automatically when you rotate the display, without you having to go into the drivers. You need to take care here though as during testing this crashed on one occasion, leaving me with a black screen forcing me to reset the computer.

In terms of raw specs the HP offers a 1,000:1 contrast ratio, which it claims is boosted to 3,000:1 with a dynamic contrast ratio setting. Personally I don’t hold much stock in this and the sudden change in brightness levels as this kicks in and out I found distracting. Response time is given as only 5ms on/off, which is fast and viewing angles are given as 160 degrees both horizontally and vertically.


This is pretty good considering the HP is using a TN based panel as opposed to the much more expensive S-PVA and IPS technology. Indeed, this is the primary reason that the monitor is as affordable as it is. 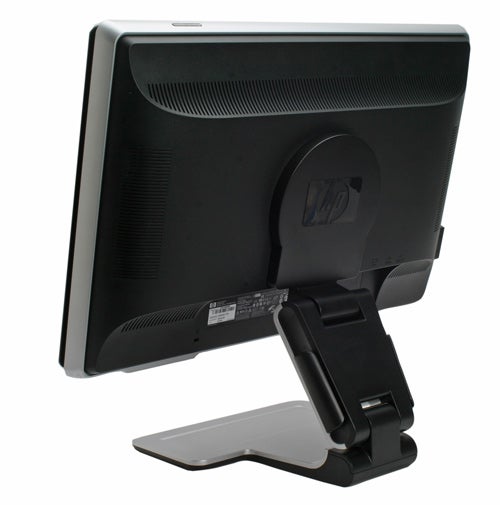 So how does it perform? Generally this is a pleasing monitor to use for everyday use. The reflection from the glossy screen will bother some, so it’s not best suited to brightly lit office environments. The viewing angles from the sides and above are excellent, with very little colour cast shift – it’s only the viewing angles from below that suffer, with significant colour loss. The monitor is quite bright and needs to be calibrated to get a good balance between brightness and contrast.


Colours are pleasing though this is definitely a slightly artificial effect of the glossy coating – looking closely they are not as vibrant as the best IPS displays. A bigger issue is the evenness of the backlighting – while it’s fine most of the time, you will have to adjust the screen angle sometimes as you’ll find a dark patch or dull patch interfering. The full screen red colour test in DisplayMate really highlighted this unevenness with darker patches around the screen and especially at the edges.

The colour scales test showed colours that step rather dramatically and lose differentiation in the middle of the scales. It also highlights the monitors biggest failing – a lack of a convincing black level, with the best it can do as sort of dull grey. This highlights the poor default settings – Custom and Gaming boost the brightness far too high and are far too washed out. If you’re watching a film in the dark Movie mode will give you the best results, but if there’s ambient light the black levels are not good enough to show much detail.

That all said, I tested the HDCP compliancy with Casino Royale on Blu-ray and enjoyed a detailed and smooth experience, but while it could never be described as the most cinematic you’ll see, mainly due to the average colours and lack lustre black level, it was still dramatic and involving.


Certainly I don’t want this all to sound too harsh. What has to be taken into account is the price – IT 247.com has a bulk-buy deal with HP to offer this at an amazing £282.76 and at that price it’s fantastic value. At the full RRP of £379 the flaws in the picture quality could be cause for a pause – but at the lower price this impressively featured, good to look at, and easy to live with display, is nothing less than a great budget buy for everyday use. If you’re a more discerning user or a professional looking for colour accuracy you’ll be short changing yourself but the average user, particularly the gamer on the budget, will be satisfied with this display.


HP’s w2408h offers a wealth of attractive features, such as HDMI with HDCP, pivot, height adjustment, rotation, four USB ports and speakers. It may not break any records in the picture quality stakes but the image quality is still decent, and unless you’re a specialist user, for the price, this large, high resolution display is simply a great buy. 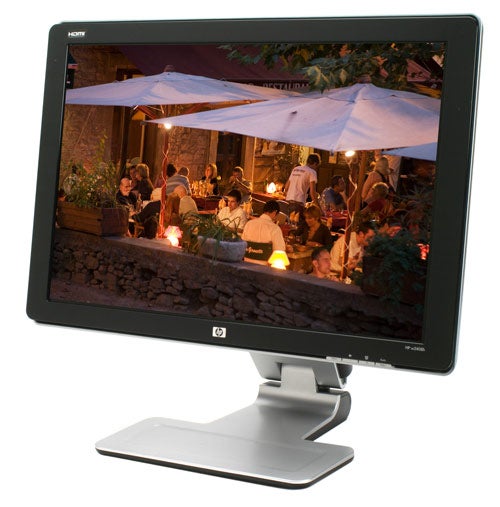