Over the years we’ve reviewed several iterations of HP’s Touchsmart line (most recently last year’s IQ810) and have watched with interest as it evolved over time. Each iteration has improved on the last and gradually dealt with niggling issues such as an underpowered specification or a lack of inputs – so with the latest update to the TouchSmart 600, we are hopeful that HP might have finally dotted the ‘i’s and crossed the ‘t’s to produce a flawless offering. 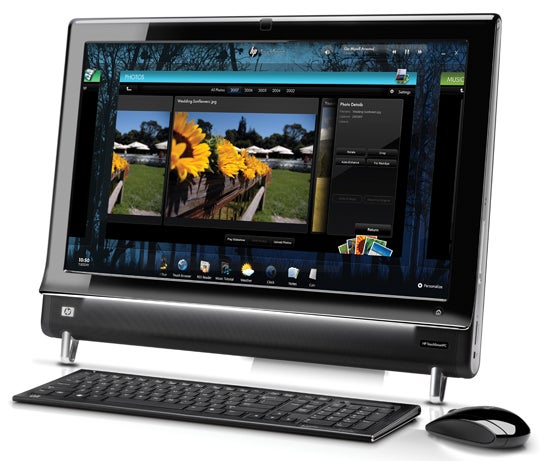 
As ever, the TouchSmart features the same simple but effective design. All the main components are located behind the display and it has just has one cable to hook it up – the power cable. It all rests on two feet under the display, with a stand behind it that enables it to be angled between 5 and 40 degrees.


The display is surrounding by a thick bezel made of heavy set plastic, which is smart but not chic in the way a Sony Vaio All-in-one or an iMac is. Top centre of the bezel is a web cam, while below it there’s a speaker strip. At the bottom right of the display there’s a button that directly launches the TouchSmart interface, which is really the main raison d’etre of the TouchSmart PC. 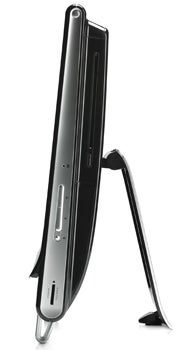 Down the left side you’ll find two USB 2.0 ports, a headphone socket and a 3.5mm audio input. Above this you’ll find a button that turns on a light with various levels depending on how often you press it, which is useful to see the keyboard in the dark and provide some ambiance while watching late at night with the lights off. It’s not exactly Philips’ Ambilight, however.


On the right hand side you’ll find the power button at the top right, while in the middle there’s a power light that indicates disk access. Beneath this is a button that gives access to the brightness and contrast controls, while underneath this is large volume up and down buttons, and a mute switch. At the bottom is multi-format card reader. 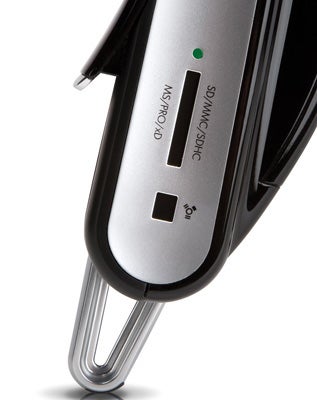 Remove a panel at the rear and you’ll find three more USB inputs and a Gigabit LAN connection. You’ll also find a DVB-T tuner for terrestrial but we could find no mention of support for Freeview HD, which is a shame – something for the next version. You get both a 3.5mm line-out and a coaxial SPDIF output for digital audio and an IR extender connector.

The TouchSmart is not short of inputs either. An S-Video in with accompanying line-in and both Component and HDMI inputs are present. The latter two are particularity welcome, making this of immediate appeal for anyone that wants to hook up a games console. The absence of these was sorely missed on the TouchSmart IQ810 we reviewed back in January.


One thing that that was notable for its absence is the Firewire port, so anyone hanging onto a DV camcorder will not be able to plug in and edit on the TouchSmart 600.


On the back right of the machine you’ll find a Blu-ray drive with DVD writing capability and since we last looked at a TouchSmart, you can now play directly from the TouchSmart interface. 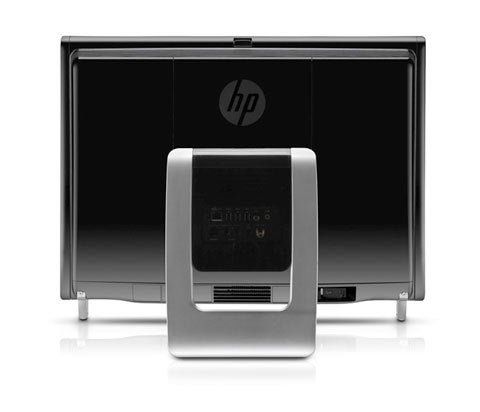 On initial launch it features a row of touch optimised applications running across the bottom in a ribbon. Pressing the relevant icon opens the application and once done, it remains open until you drag your finger from the top bar of the app straight down back onto the ribbon. You can have all the touch apps open at once, but the responsiveness will inevitably be hardware dependant. With the Core i5 in place and the 4GB of RAM, the TouchSmart 600 barely broke a sweat even with several open at once. Once multiple applications are open you can swipe between them with your finger either with a quite dismissive swipe, or slowly and deliberately.


As a machine that could well find itself being mounted on the wall of a (clearly well appointed) kitchen, it makes sense that there’s a selection of recipes to look through. We also particularly like the calendar, and it was a simple task to sync it with a Google Apps account and populate it with diary entries.

In case you’re wondering, text entry via touch is straightforward, with a large on-screen keyboard.


Another touch app that caught the eye is Canvas, that lets you, or any younger fingers in the household, draw, paint, swish and blob colours onto the screen. For a family PC this could have great appeal – in fact kids will love it. Using it is involving and even therapeutic, which isn’t something we normally say about desktop PCs.


As far as image quality goes, we found the screen to be bright and punchy, and text was pleasingly sharp. The picture was eminently watchable but contrast levels were not the very best, with evidence of crushed blacks. Dark areas of the image looked, well, dark, with a lack of dark detail that can make some action hard to follow. Overall though, we’d be happy with it for casual viewing.


The speakers also impressed for volume and have clearly been designed not to distort when pushed up to maximum. The sound does get slightly muddy but it enjoys decent volume and clarity.

As far as web browsing is concerned the good news is that you can at last now move web pages up and down with your finger from anywhere, without having to use side scroll bars. Hurrah. Twitter also gets its own dedicated finger friendly Touch App.


Overall, we like the Touchsmart interface, and feel it does enough to raise itself above the gimmick level. This is clearly a good thing as, after all, without a decent touch interface there would be little point in a touch-screen PC.


It’s not totally without flaws – far from it. It isn’t quite as responsive as an iPhone or Android device so one does have to be a touch more deliberate. There’s an icon for Skype and when we first pressed it, it launched the Skype set-up routine. However, once installed, the same icon remains, and launches the same set-up routine. We normally find we only have to install Skype once, and as there’s no integration between Skype and the TouchSmart interface, it’s rather pointless it being there in the first place. Also, the less said about the silly aimed-at-kids ‘Magic Desktop’ the better. 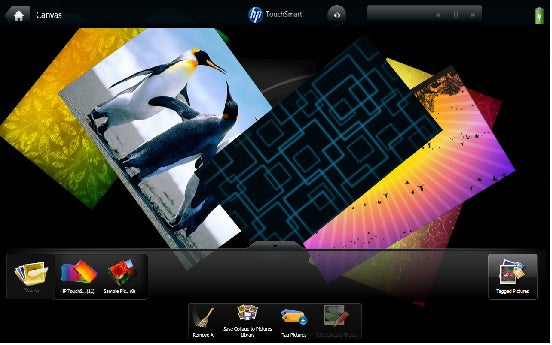 The music app is decent, and continues to play when you switch to other app – but where was the full screen album art and why can’t you use your finger to scrub within the track? Touch seems such an obvious way to do it.


As a conventional computer though, the presence of the Core i5 and that generous 4GB of RAM means that this machine is always a pleasure to use and the PC Mark Vantage score of 5,622 shows its power. With an Nvidia GeForce GT 230 in place it was never going to be a gaming powerhouse, but we could play TrackMania without any problems, achieving 34.6fps at the screen’s native resolution, so casual games will be fine.

Finally, the thin, wireless keyboard is comfortable to type on and the mouse, while not the last word in style, is responsive and comfortable.


As ever, we like the TouchSmart 600, and with its strong specification it compromises very little. We like the improvements to the TouchSmart interface, though you’ll certainly need to drop back into Windows 7 on a regular basis.


If you’re looking for a cheaper variant, you can save £100 with a Core i3 and even slower graphics, while a TouchSmart 300, with a 20in display and an Athlon II X3 processor, will cost £899. If you can afford it, the 600 is the one to go for if you want all its features. Just keep in mind that for £1,350 there are a lot of alternatives, some of which are superior in certain areas. 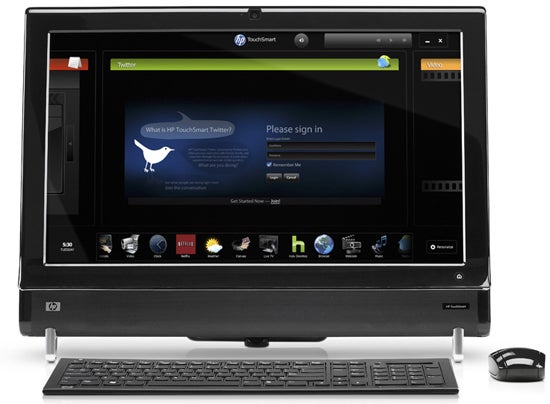 The most interesting of these is doubtless Apple’s Core i3 refresh of its iMac 27in for just £50 more. It might lack the Blu-ray drive, analogue video input and touch interaction, but does get you a superior, metal-clad chassis which looks simply stunning, and a bigger, better, higher-resolution IPS-based screen. Frankly, we know which we would choose.


The TouchSmart 600 is a good refresh of a convincing touch PC line. It’s smart, neatly designed and the Touchmart interface is good enough to actually bother with. As you can now plug in devices such as consoles via Component or HDMI, it’s certainly a versatile contender and worth considering.