The first thing you notice about this mid-range scanner from HP is its design. Far from being a piece of grey plastic office gear, it shows considerable design effort and should be just as at home in a smart study or even a living room, as it would in a trendy office.

The lid is one solid piece of lightly-tinted acrylic, sandwiched between a roughly A4-sized white panel on top and a grey flatbed cover underneath. The grey cover also holds the built-in transparency adapter, connected to the main chassis via a slightly naff grey cable.

The surround of the scanner is coloured in the same grey, with a number of moulded slots around its edge for styling. All in all, this is a pleasantly fresh take on what is normally a very utilitarian piece of computer equipment.

It’s not all good looks, though. The two-stage hinges at the rear ensure the lid can left around 2.5 cm above the flatbed, while still remaining parallel with it. This means you can scan from something a thick as a Jeffrey Archer novel and still get a good quality scan.

Three control buttons are set into the white panel in the lid and these give single -ush connection to scan, copy and PDF functions, combined with HP’s Scanning software. At the back are sockets for a black block power supply, USB connection and the transparency adapter cable. The adapter can take two 35mm slides or two negatives; fine for slides but you’ll probably need to snip up your negative strips to get them scanned.

Software installation is straightforward and support applications are provided for both Windows and OS X, with IRIS OCR software built into both versions. HP Scanning is a Twain application, which aims to provide simple assisted correction for colour and other photo anomalies.

The Scanjet G2710 may look up-to-the-minute on the outside, but inside is a traditional device, with a cold cathode tube providing illumination and a Charge Coupled Device (CCD) as it’s scanning element.

There are plenty of arguments as to whether this arrangement is better than LED illumination and a Contact Image Sensor (CIS), most of which are like listening to arguments in favour of valve amplifiers. Both work fine, but perhaps the cold cathode/CCD combination has the edge because of its greater refinement. Most high-end scanners stick to this combination. 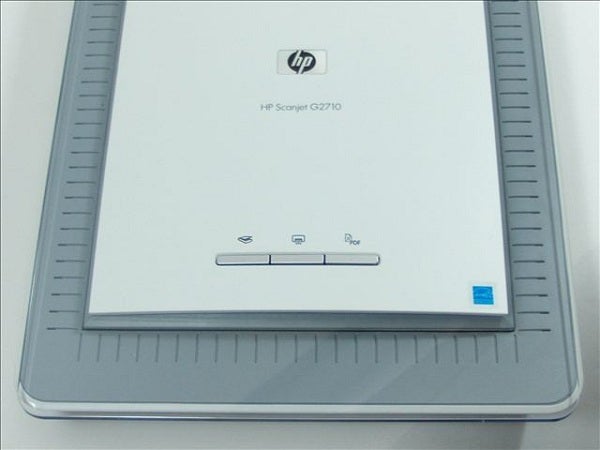 Having a cold cathode tube to heat up and stabilise takes longer than an instant-on LED, and the first scan in a session takes roughly 30s longer than subsequent ones, waiting for this to happen. The same is true when firing up the transparency scanner, as the backlight in the lid uses similar technology.

As soon as you run HP Scanning, it performs a 200ppi preview scan. HP’s thinking must be that for many applications, 200ppi will be all that’s needed, and it can get away without a second scan. However, it’s an annoying delay if, for instance, you’re scanning a batch of slides, as you have to set up for a transmissive scan and rescan for each transparency.

Scan times are not particularly impressive, with a 200ppi black-and-white A4 page taking 19s and a 300ppi greyscale with OCR taking 44s. OCR is handled by IRIS within HPs scanning software and will scan to an rtf file, but not directly into Word, so there’s an extra step in creating editable documents.

Scan quality is good for this class of scanner, getting close to original colours and detail levels on photographic subjects. When we tried our scanner targets, we noticed a bluey tinge to the greys in the test gratings, where other scanners, such as the similarly-priced https://www.trustedreviews.com/epson-perfection-v330-photo_Peripheral_review Epson Perfection V330 Photo, produced more neutral greys.

The colour target scan did well, though still with a slight blue cast in some of the greys. It produced a nicely tanned portrait shot and all the grey swatches were easily distinguishable. The 35mm transparency target at 1,200ppi suffered from noticeable noise in the darker colour shades. 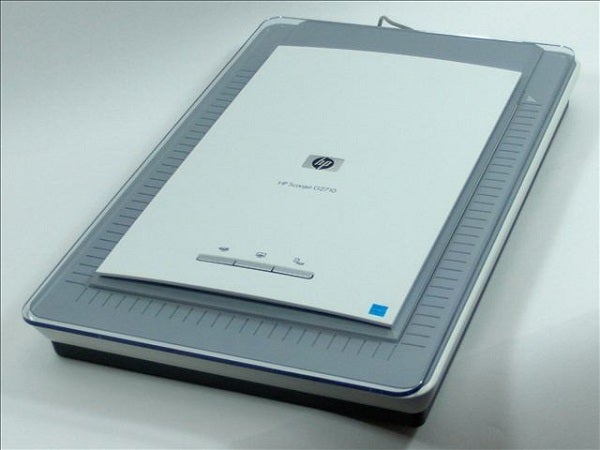 Verdict
This is a fair, general-purpose scanner for home and photo hobbyist, but despite its well-designed good looks, it didn’t produce the same kind of quality scans as some other devices in the same price bracket. It was never poor on any test, but there’s better scan quality to be had for the same outlay.