Ever since I bought my first flatbed scanner, I thought it would be great if I could digitally archive my stack of old film prints to create a permanent and easily accessible image library for my friends and family to see. Well, I’m now on my third scanner and still no closer to achieving that goal, simply because it takes so long to place each photo face down onto the flatbed glass then scan, straighten, edit and finally save the image to the hard disk. To put it in perspective, a single scan of a standard 15 x 10cm (6 x 4in) print at a modest 300dpi takes me about two minutes from start to finish with my current set-up. Multiply that by my numerous photos and it soon becomes clear why my digital archive remains incomplete.


So, wouldn’t it be great if the whole process could be automated in some way? This is where the new HP Scanjet 5530 Photosmart scanner comes in. The 5530’s lid cleverly integrates an Automatic Photo Feeder (APF) that allows you to scan up to 24 photos at a time at the touch of a button. Photos are automatically fed across the scanner glass on a cushion of air (generated by two small fans housed in the lid) before popping out at the other end of the scanner lid.


This layer of air protects the photos from damage by the scanner’s mechanics as well as friction from the flatbed glass, although HP advises against using the APF to scan fragile, irreplaceable or damaged photos. The 5530 also comes with a separate plug-in Transparent Material Adapter (TMA) for scanning 35mm negatives and slides but disappointingly not medium format film. All this imaging wizardry comes at a price though, as the 5530 is a fairly chunky (yet well built) piece of equipment measuring in at 312 x 545 x 173mm (WxHxD).


As for connectivity, the 5530 has a high speed USB 2.0 connection (cable included) and is both PC and MAC compatible, although there’s no FireWire interface. The step-by-step instruction sheet makes setting up the scanner a straightforward affair and the HP Photo & Imaging software installed first time without a hitch. As well as the TWAIN scanner driver, the comprehensive suite of HP software includes Photo and Imaging Director which controls all major functions and Photo & Imaging Gallery for viewing photos and carrying out basic image editing. HP also bundles several other applications including ArcSoft’s Collage Creator software, ReadIris Pro 8 for optical character recognition (OCR) and a copy of Adobe Photoshop Elements 2.0.


The 5530 features a 2,400 x 4,800dpi optical resolution and an internal 48bit colour depth. On the front panel, six separate task buttons provide shortcuts to some of the ‘Scan’, ‘Copy’ and ‘Share’ software functions that are present in the Photo and Imaging Director applet. By default, images scanned using the supplied HP software are converted to 24bit data before being transferred to the computer. However, this can be overridden if you prefer working with the original 48bit files, especially if you like using the TWAIN driver in a 48bit compatible software package such as Photoshop.


One thing I found particularly annoying when using the TWAIN driver was that it automatically closed once it finished a single scan instead of prompting you for additional media (except when scanning from the Automatic Photo Feeder). So if you’ve got lots of pictures or documents that you want to manually scan into a third party graphics package, you’ll have to re-open the TWAIN driver and re-select your scan settings each time. Another minor irritation is that the TWAIN driver automatically performs a reflective preview scan each time you open it, even if you intend to scan slides or negatives using the plug-in TMA. Overall though, we found the HP software suite quite easy to use and it can also give you control over how the final image is scanned.

The 5530 completed our 48bit A4 colour scan test at 300dpi in a respectable 29 seconds. However, a 600dpi scan of the same area took three minutes 24 seconds, which is more than five times slower than the Epson Perfection 3170 Photo that we reviewed back in January 2004. Scanning times at 2,400dpi for colour negatives and slides were equally disappointing when compared to the results obtained from the Epson scanner. However, scanning speed isn’t everything.


We were generally quite impressed with the quality of the scanned photo prints. Both tonal and colour reproduction were good and scanned images were generally noise free with plenty of detail. Unfortunately, scanning from negatives did not produce equally impressive results. The 5530 struggled to correctly judge the required exposure with images often appearing too light and washed out, although this can be corrected manually using the scanning software. As for the scan of our 35mm test transparency, it didn’t look as sharp as the scan produced by the Epson Perfection 3170 Photo, nor could it compete in terms of colour balance, clearly suffering from a distinct bluish-green tone.


On a more positive note, the 5530 worked well with the bundled ReadIris OCR software and correctly recognised all the words and formatting on our test page typed with a 9-point Times New Roman font.


Unsurprisingly, the 5530 really comes into its own when the APF – its key selling point – is put to the test. The feeder tray will accept print sizes between 13 x 9cm and 15 x 10cm. Just pop in your prints at one end of the APF, press the scan button on the front panel and away you go. In our tests, the 5530 managed to scan and save 24 15 x 10cm prints at a practical resolution of 300dpi in just under eight minutes (with preview mode turned off). That’s roughly 20 seconds per print, each saved as a 24bit colour jpeg.


Admittedly, you might still want to edit or manually adjust each image afterwards but nevertheless, the APF is still bound to save you precious time in the long run. The only apparent drawback of integrating the feeder into the lid of the 5530 is that the APF mechanism always features in the background of every standard scan you perform. This occasionally confuses the software when it attempts to auto-crop an image, and a few of our scans had to be manually re-cropped afterwards in order to cut out this structure. As to why HP does not include some form of removable white background to mask this structure is unclear, but it does seem the obvious thing to do.


To sum up, the HP Scanjet 5530 Photosmart produced good results with reflective scans and the inclusion of the excellent Automatic Photo Feeder will undoubtedly appeal to those who need to scan lots of photo prints on a regular basis. However, the irksome driver, the lack of a medium format transparency adapter and some questionable 35mm transparency results ultimately affect the 5530’s desirability.

Judging colour is a difficult task at the best of times. However, the overall tone of the print and negative scans produced by the HP 5530 (below) look respectively less natural and more washed out when compared to those produced by the Epson unit. 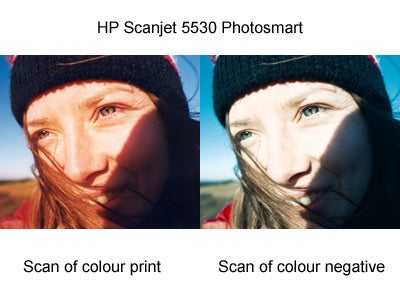 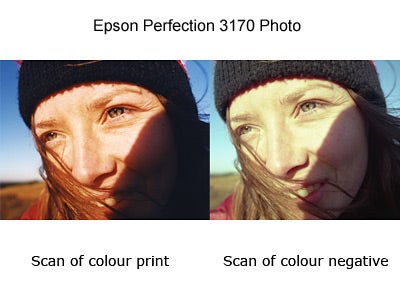 This montage shows the level of definition you can expect from this scanner when it is used to scan from colour negatives. The top picture is a scan of a professional print made from the same negative. In the picture below that, much of the fine detail is lost. 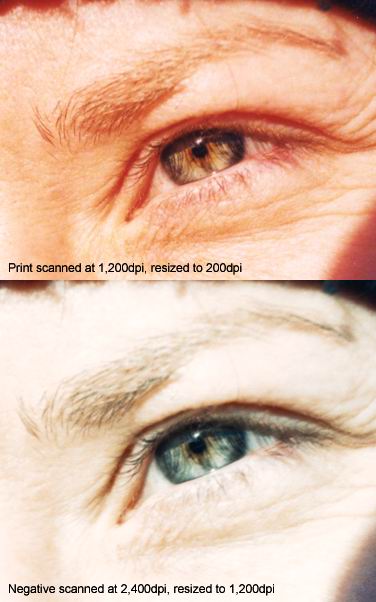 This is a positive scan from a transparency/slide. Granted, this is a small version of the full scan, but it does give you an indication of the detail captured and the colour accuracy. The insert shows the quality of the scan at 100% resolution (ie. 2,400dpi). You can notice some overall fuzziness, and some blue coloured fringing along the edges of the wing mirror. 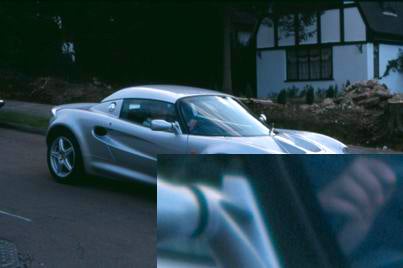 The picture below is a direct comparison between a 2,400dpi scan of a transparency produced by this scanner (top) and the Epson Perfection 3170 Photo (bottom). Notice the difference in colour. 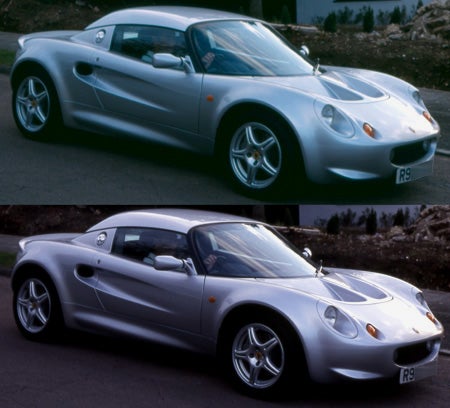