HP’s ProBook range certainly makes an impression. Not only is it very good value for money – in the 15.6in NX613EA you’re getting a capable 2.1GHz Core 2 Duo CPU, 3GB of RAM, a 320GB hard drive and plenty of extras for just £470 excluding VAT – for a business laptop it’s also quite visually alluring. 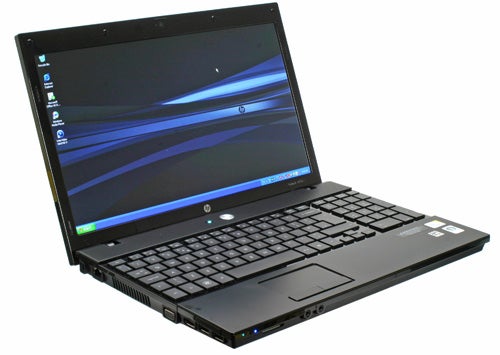 Before you even open the 4510s up, its solid, unashamedly square chassis forms a stark contrast to most mobile machines with their curves and tapered edges. Unfortunately the glossy black lid, though it looks nice, picks up fingerprints like the CSI team on a triple homicide. There’s also just a bit too much flex for our liking towards the lid’s centre.


Opening up the laptop reveals a good-looking, all-black interior. This isn’t quite the dull, ugly appearance of most cheap laptops, though it’s no design marvel, either. Housed within the glossy bezel is a 2.0 megapixel webcam, while below its lower edge is a raised metal grille, containing a silver shortcut button and power button both tastefully backlit in cyan. 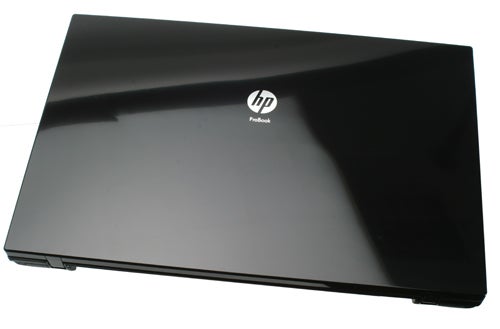 Below the metal grille we have an isolation-style keyboard, which like Apple, HP refers to as ‘chicklet’. Keys are somewhat smaller than we’re used to seeing on HP laptops, but as usual it’s still very comfortable and the new design allows for plenty of key separation. A slightly narrower than normal left-Ctrl key is the only compromise in the layout, but it’s a small inconvenience given you also benefit from a full number pad. Fundamentally, then, this is a very good keyboard and it delivers excellent tactile feedback, too.


Below the excellent keyboard is a raised wrist rest coated in soft-touch plastic; an effect continued on the touchpad and its buttons. Unfortunately this finish really shows off grease so it’s almost as bad as the lid, which is hardly ideal in a business laptop that might be shared among different people. It looks and feels nice, but it’s not necessarily practical. 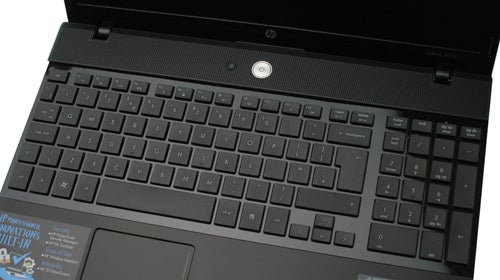 Still, the recessed touchpad is a delight to use and it’s placed so that your palms won’t accidentally brush the pad while typing. Similar praise can’t be lavished on its buttons. While they’re well-positioned they feel a tad loose and imprecise. Build quality for the rest of the machine is pretty good though, despite the previously mentioned flexing lid, which is only a minor complaint.

There’s plenty of connectivity available on the 4510s. To the left you’ll find a Gigabit Ethernet port, 34mm ExpressCard slot (though ideally we would have liked a 54mm slot on a machine this size) and two USB ports, in addition to VGA and HDMI for video. HDMI is quite rare on a business laptop, so its inclusion here is a nice bonus.

At the front there’s a wireless switch with LED indicator, a card reader that will read the usual suspects (SD/HC, MMC, MS/Pro and xD) and twin 3.5mm headphone and microphone jacks. Finally, on the right we have a further two USB ports, the tray-loading LightScribe DVD-Rewriter and power plug.


Thankfully, in keeping with its business aspirations, the ProBook’s 15.6in, 16:9 LCD screen features a matte finish, so glare and reflections are eliminated. We honestly wish manufacturers would apply this approach more rather than the glossy mirrors found on many consumer laptops.

As expected, the 1,366 x 768 screen does suffer from the usual laptop pitfalls, including poor viewing angles with copious contrast shift. Backlight bleed is almost nonexistent and banding is minimal, but small text isn’t quite as sharp as we’d like. Overall it’s a fairly average screen, but certainly good enough for its intended market.


Likewise the speakers are far from special, distorting even at their fairly low maximum volume and producing painfully tinny bass, but they do the job for Windows sounds and the occasional online video.

Inside you’ll find an Intel Core 2 Duo T6570 processor running at 2.1GHz with an 800MHz front side bus. While this CPU is getting a bit long in the tooth, it’s certainly more than adequate for any business or indeed multimedia tasks you’d care to throw its way. This is backed by 3GB of RAM, which while hardly generous is more than the 32-bit version of Windows XP Professional needs to be happy.


Yes, you read that right: in the month that Windows 7 is coming out we have a laptop sporting the nine-year-old OS (though a Vista Business upgrade disc is included). Of course that’s just the way many business consumers will want it; for one thing, even now there are quite a few printers and other older devices that still don’t have Vista drivers. It’s worth noting, though, that to get XP instead of Vista Business, you have to be an actual business and are “expected” to order at least 25 systems with the same OS image annually. Windows 7 should also be available when it launches.

As far as storage goes, there’s a generous amount with a 320GB drive on offer. Though HP lists the drive’s speed as 7,200rpm on its UK website, this is likely an error as our ProBook sample came with a standard 5,400rpm drive. However, a big plus is HP’s 3D DriveGuard. This combines shock-dampening material, a magnesium drive cage and an accelerometer that locks the drive heads when motion is detected. This is a high level of protection for a moving-parts disk, especially in a laptop as cheap as this. 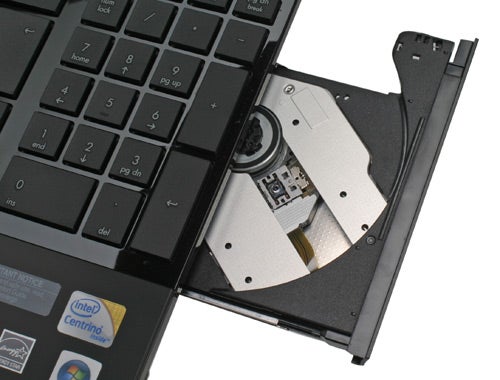 Graphics, meanwhile, are handled by the usual Intel integrated GMA X4500M HD chip. We imagine that one of the main reasons for this chip’s popularity at the business end of portable computing is not just because it’s cheap and allows for great battery life, but also because it’s so underpowered that it literally won’t let you play any recent 3D games on your business machine.


Wireless connectivity on this HP is well up to spec, with Intel 802.11n wireless and Bluetooth 2.0 available. Combined with the Gigabit Ethernet for wired networking, the 4510s should integrate easily into any office ecosystem.


Looking more closely at its business specific features, it’s no surprise to see no Trusted Platform Module (TPM) in this machine. It’s a feature normally reserved for more expensive machines targeted at large corporate companies, whereas the ProBook’s natural home is small businesses. 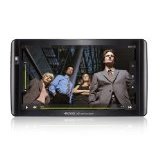 Less forgivable is the lack of a fingerprint reader, which is arguably the minimum one would expect in terms of security features. Aside from 3D DriveGuard, then, the only notable business orientated feature is FastCharge, which charges your battery to around 90 per cent in as many minutes – a feature that made our battery testing a lot easier!


On the software front there’s HP’s Protect Tools Security suite, which offers Admin tools (including individual device access), backup, drive encryption, and even BIOS settings from within Windows. There’s little here that isn’t available in commercial software packages, but it’s comprehensive and easy to use and having it all pre-installed is pretty handy. 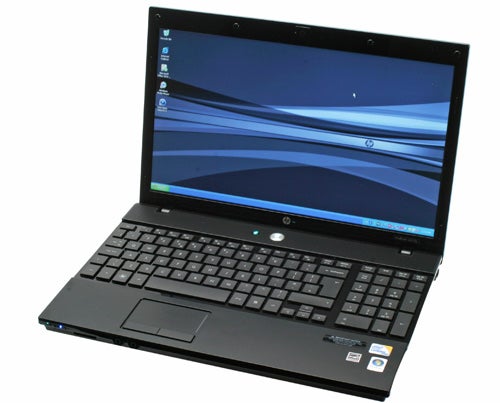 Probably the single most impressive aspect of the ProBook, though, is its battery life. It makes the most of its six-cell (47WHr) battery, providing just over four hours in the semi-intensive Productivity benchmark. On the more conservative Reader test, this laptop managed an even more impressive five and a half hours; a figure that puts it into the top ranks of laptops lacking ULV processors or extended batteries.


With the HP ProBook 4510s you get a machine that offers excellent battery life and represents decent value for money. However its glossy lid and grease attracting palm rest are less than ideal in a business machine, while a fingerprint reader is an omission. There’s lots of potential here, but HP needs to tighten its focus to make the ProBook a real contender.