What is the HP Pro Slate 8?

The latest tablet from HP joins a
growing band of business devices aiming to find a home in the office
while taking a bite out of the all-conquering iPad’s market share.

That
extra bit of budget has allowed HP to throw some sheen at the Pro
Slate’s aesthetics. Every inch of the Pro Slate 8 screams high-class
design: it’s ringed by metal and finished with a slick, shining bezel,
and the screen is sandwiched between two long speaker grilles.

There’s
a smart HP logo at the bottom and two cameras at the top. It’s a
better-looking machine than the lopsided Dell, and it arguably has more
character than the ubiquitous, white-bordered iPad.

SEE ALSO: Our Pick of the Best Tablets 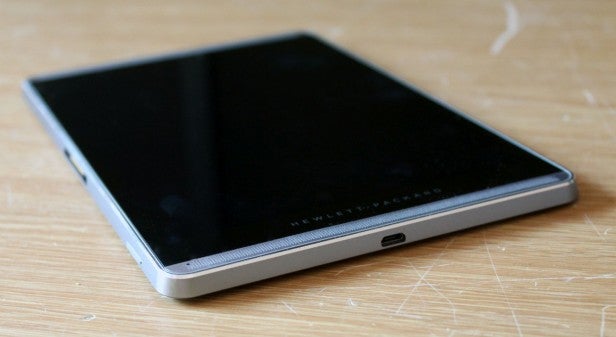 The
rear of the Slate 8 Pro doesn’t have the same impact. It’s finished in a
soft-touch material that gives a little when pressed, and there are
exposed screws and visible seams. There maybe those who like the
industrial touches, but all we can see is areas that will collect dust.

Overall,
though, there’s no denying the HP’s good looks and build quality: it’s
solid, smart and high-quality, with a business edge that will see it
welcomed in an office.

The micro-USB port sits along the bottom
edge, the left-hand side houses a docking point connector, and there’s a
headphone jack at the top. The volume rocker and power button sit along
the right-hand side – although they’re broadly fine, they lack the
firm, satisfying snap of the iPad equivalents.

The HP is a little
chunkier than both of its rivals: it weighs 350g and is 8mm thick. The
Dell is 2mm thinner and almost 50g lighter, with the iPad Mini falling
in between the two Android devices. Although this may bother some
people, it isn’t a deal-breaker, especially if you’re going to deposit
the HP into a case.

HP is pushing its peripherals to the fore.
Our review sample arrived with the Paper Folio case, which costs £60,
and the tablet is bundled with the HP Duet Pen, which is around £42. 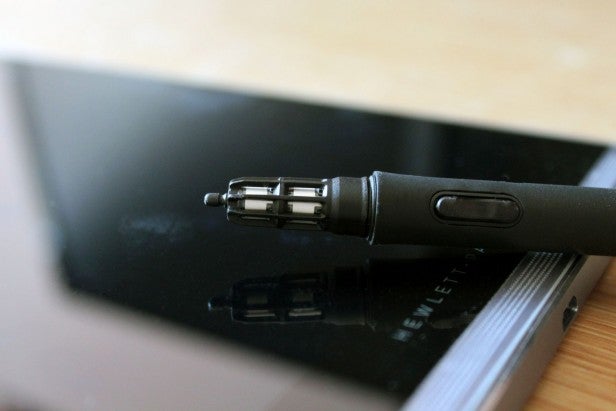 The
pen is quickly calibrated and can be used to navigate Android, but that
isn’t its only use. Open up the Folio Case and you’re greeted with a
pad of paper. At first this seems unusual – after all, the tablet can be
used for note-taking – but it’s designed to be used with the Duet Pen.

Open
the Slate Pro’s note-taking app and you’re able to write on the paper
and have the pen display your scribbles on the screen. It’s a neat idea
and, of course, it isn’t restricted to the Folio’s notepad – but it
doesn’t work well enough. The pen was inconsistent, with some letters
transcribed perfectly and others missed entirely. It would sometimes
skip entire words and we’d have to pause and wait for the tablet to
catch up.

The fact that the Duet Pen’s insert can be switched around to work as an actual biro means it isn’t a total loss.

The
Pro Slate has a 7.8in screen with a resolution of 2,048 x 1,536. This
is identical to the iPad Mini, and it results in a density level of
328ppi. Images on-screen are pin-sharp, with pixellation barely visible
even under close scrutiny.

Overall quality is also high. The
Slate’s measured brightness level of 328 is excellent, and it means
there’s enough punch behind the panel to make it easily visible in
bright sunlight. The black level of 0.25 nits is also superb, delivering
dark tones that are suitably inky and deep. The resulting contrast
ratio of 1,312:1 is excellent, and impacts across the whole screen: it
gives enough punch and vibrancy to light colours, helps to bolster dark
tones, and displays a good amount of variance to fine changes in tone.

There’s
no sign of banding or backlight bleed around the edges of the screen,
either. In short, this panel is as good as the iPad Mini’s Retina
display, if not better, and it’s easily up to the task of both work and
play.

Dell’s tablet has a higher density level than the HP
because of its 2,560 x 1,660 resolution , and the Venue’s screen doesn’t
just beat its rival for pixel count – the quality is comparable too.
Its measured brightness level of 228 nits isn’t as impressive on paper,
but it’s ample, and is backed up by the stonking black levels delivered
by the AMOLED screen, which are even deeper than those produced by the
HP.

The HP can’t quite match the Dell for pixel count, then, but
it runs close; in daily use, most people won’t be able to tell the
difference.

In the audio department, the differences between the
HP and Dell become more obvious. The Slate’s pair of front-facing
speakers pump out good treble and high-end sounds that avoid the tinny
reproduction we associate with mobile devices, but the Dell has more
bass, which makes for a well-rounded music and movie experience. 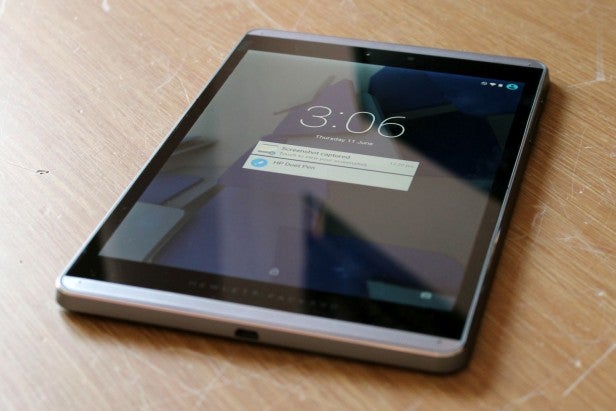 The
Slate Pro is supplied with the latest version of Android, codenamed Lollipop, which is a
boost over the Dell’s older version of the software. Version 5.0.2 has improved run-times,
vector drawing, the new Material UI and improvements to the lockscreen,
notification tray and Quick Settings menus.

HP has augmented the
OS with its own office-friendly additions. The company’s docking settings handle
USB, audio, HDMI and Bluetooth connections, and the Duet Pen can be
configured to interact with the screen without actually touching the
panel.

Secure-boot and data-encryption tools sit alongside HP’s
local and remote-management interfaces, and ARM TrustZone adds another
layer of security. Avast Mobile Security is installed as well.

Thankfully, third-party
tools are kept to a minimum. There’s Evernote, Corel
Painter Mobile, KeyVPN and WPS Office, and the aforementioned Avast
security suite – and that’s it.

It’s not a bad set of utilities,
especially on the security front, but the HP falls behind the Dell in
some areas. The My Dell tool provides reasonable tweaking facilities, and
more diagnostic options are included.